Accessibility links
5 Things We Learned From ShondaLand We know that Shonda Rhimes doesn't want to talk about her legacy, that Olivia Pope is a questionable role model, and a few other things about Thursday nights on ABC. 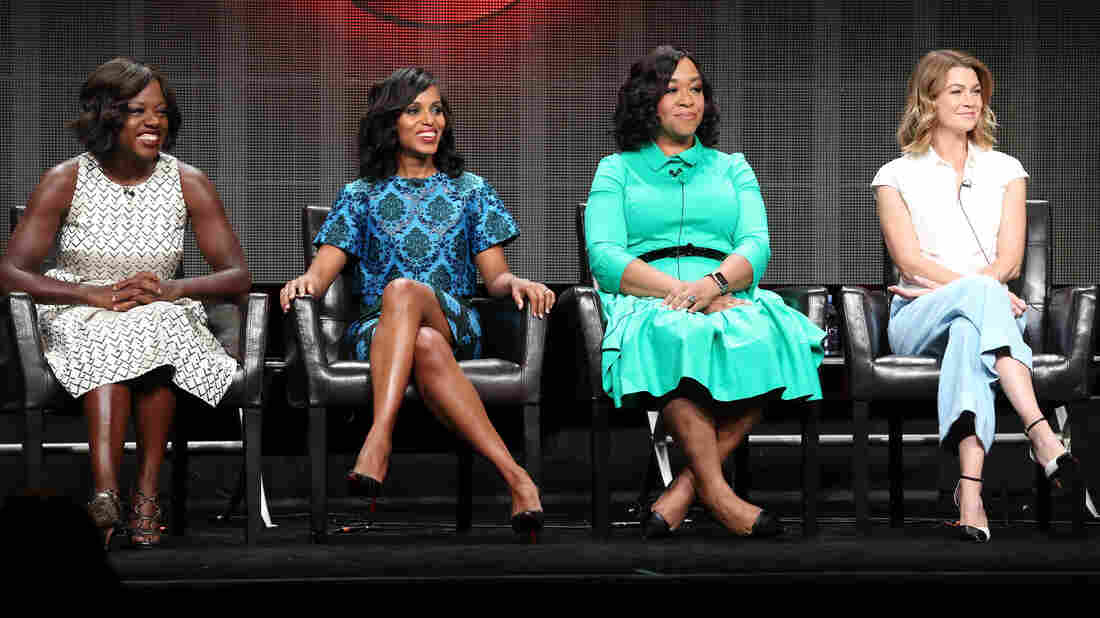 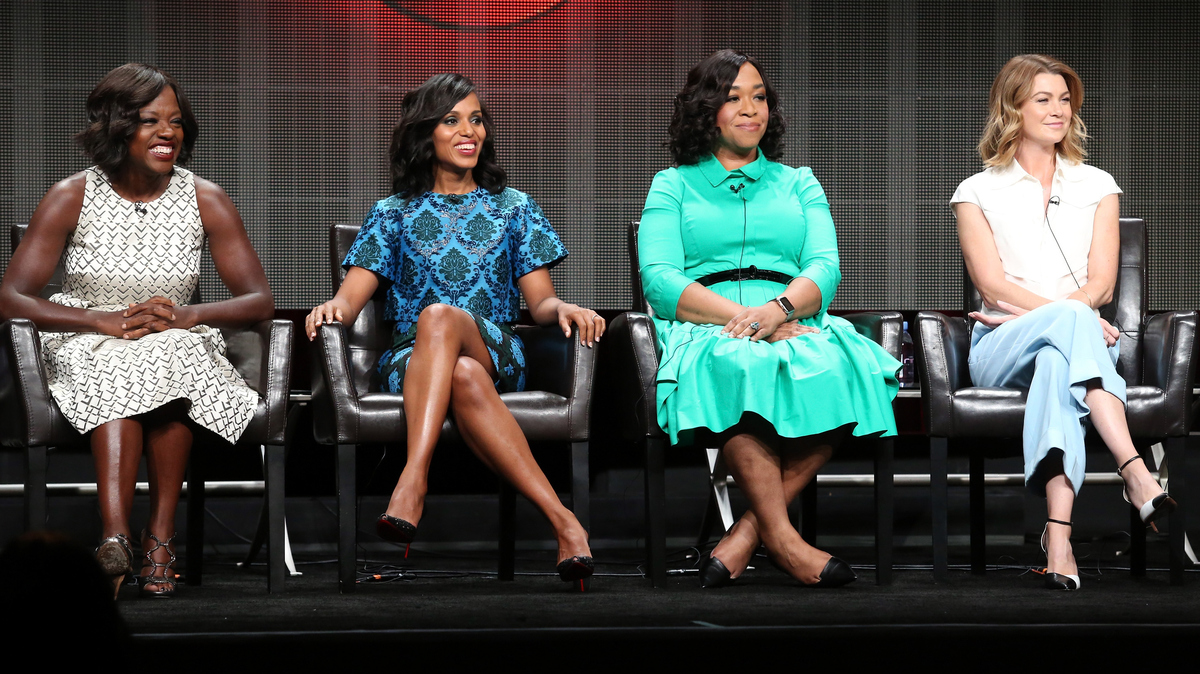 Tuesday's Television Critics Association press tour presentations from ABC wrapped up with a panel devoted to the network's scripted ace in the hole: Shonda Rhimes, who created Grey's Anatomy and Scandal and is an executive producer of How To Get Away With Murder. Rhimes and her producing partner, Betsy Beers, sat on stage with Murder creator Pete Nowalk and the three actresses who lead what the ABC marketers have labeled the "TGIT" (Thank God It's Thursday) lineup: Ellen Pompeo of Grey's, Kerry Washington of Scandal, and Viola Davis of How To Get Away With Murder. Rhimes calls her production company ShondaLand, and from our visit, we were able to bring back a few lessons.

1. Shonda Rhimes does not discuss her legacy. One of the things repeated press conferences with Rhimes have demonstrated is that she prefers specific questions to general ones and is particularly averse to getting into conversations about how important her contributions to television are. Asked about her legacy, she said Tuesday that she doesn't think it makes sense to discuss one's legacy until one stops working. "I certainly don't spend any time thinking about legacy because we are still doing this. You'd have to be not doing it anymore to think about that. So I really think staying in the present is more useful to me." And she's consistent – asked later who might play her in a Shonda Rhimes biopic, she said, "There's not going to be a biopic about my life." "Ever?" the reporter asked. "Ever. I am not interesting."

2. Don't assume Meredith Grey's life will be defined differently now. If you're hoping to catch up with Grey's Anatomy and you're not up to speed on its very topline stories, just skip to the next item, okay? Okay. So the rest of us may be aware that Patrick Dempsey, Pompeo's leading man since the first episode, left the show, and that his character, Derek Shepherd (a/k/a McDreamy) passed away. A reporter asked Rhimes, "Is there a recalibration of Meredith now that she's not partially defined by her relationship with a man? And if so, is that something that you are enjoying, or is that a major rethinking of the character all together?" What happened next was not a surprise. Shonda Rhimes flatly said, "Meredith Grey has never been defined by her relationship with a man." Ellen Pompeo said she had planned to give exactly the same answer, then clarified, "I don't think in ShondaLand, I don't think any female characters are ever defined by a man." So that's maybe a no, at least if you phrase it that way. Rhimes later said that Derek had to die because with Dempsey leaving, the choices were for him to leave Meredith, which would make their 11-year love affair seem bogus, or for him to die. So he died.

4. Likability and exhaustion are linked. Perhaps the most intriguing part of the panel was a moment when Viola Davis linked two topics that are pretty common in press tour sessions: leading a drama series as a pretty exhausting job and playing likable versus unlikable characters. As the actresses talked about the demands of leading popular shows, Davis said, "I do find it grueling. I do find, you know, Kerry told me how it was going to go down, but I don't think that I actually listened to her, and now my tongue is hanging. But I have to say and I have said it, and I will say it again: I think the most difficult part of doing television is becoming a Mr. Potato Head character." What does she mean by Mr. Potato Head? She's talking, I think, about plugging in prefab elements because it's easier. This is where likability entered the equation.

"That all of a sudden people start saying, 'Uh, she's not likeable. Why did she say that to him? Why did she sound weak? She's strong in the courtroom. Why isn't she strong in life?' And then, when you get tired, what happens is you want people to like you. You just want to plug into something that you feel is going to work immediately, and then that's when you start compromising your soul as an artist. And I came into this because I wanted to create a human being. Not a personality, not a gimmick, but a human being, in this body, with this face, with this everything. And I think the challenge year in and year out is to continue doing that. Pete's doing his job. He's just great with collaboration. Then, it's up to me to do my job, and I find that the biggest challenge when I'm tired and aggravated."

I've never really heard an actor put it this way, but it makes an enormous amount of sense: acting has physical and emotional demands and complex acting is harder than simplistic acting, so the temptation when you're physically or emotionally tired is to do what people in any other job might be tempted to do: slack off. So as you consider why a particular character gets less interesting or less nuanced over the course of a long series, don't neglect the possible influence of writer and actor exhaustion.

5. Shonda Rhimes does not run all these shows day to day. The media presentation of ShondaLand is often that all these shows are hers in the same way – she creates them, runs them, writes them. In fact, she was asked what it was going to be like to have four shows on the air once the upcoming The Catch begins airing. But one of the things Rhimes stresses over and over is that her role on different ShondaLand shows is different. Grey's and Scandal are her shows. But The Catch was created by writer Jennifer Schuur. Pete Nowalk created How To Get Away With Murder and created that lead character, and he's the one who, from day to day, runs that show. Here's how Rhimes describes her role on it: "I get to stick my head in like a proud grandmother and hold the baby and say, 'Oh, it's pretty,' and give it back and go back to my job."

Whether she's quite that detached or not, it's interesting that on the one hand, considering her the showrunner of everything she executive produces seems like it's giving her too much credit, like she's not doing as much writing and showrunning as that image envisions. But on the other hand, it doesn't recognize that the other part of her job now is having the pull to not only make her own shows, but to lend power to other people who want to make their shows. In other words, to over-credit her as a showrunner is to under-credit her as an empire builder – and it perhaps underestimates her legacy, not that she would put it that way.