Accessibility links
Review: 'The Marriage Of Opposites' By Alice Hoffman Alice Hoffman's new novel is a fictionalized account of the painter's early life and family, including the eccentric mother who raised him on the Caribbean island of St. Thomas. 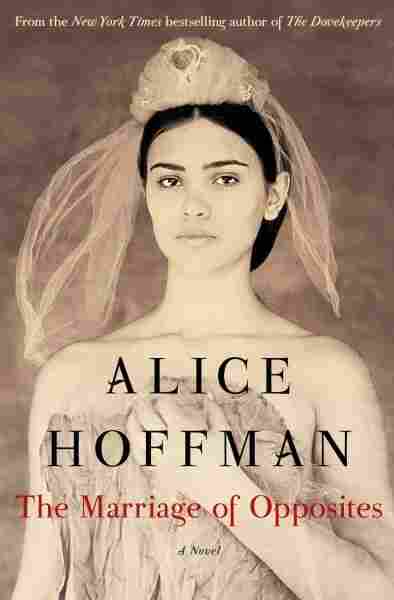 The Marriage of Opposites

Of all the colors in the brilliant paintbox that is Alice Hoffman's latest novel, The Marriage of Opposites, "haint blue" is the most important. Yes, the landscapes and the house interiors and the clothing brim with creams and reds, emeralds and silvers, and blues of every shade prevail. But haint blue alone has the power to ensure there will be "no ghosts, no demons, no sorrow, no separations, no thievery, no witchery, no abductions, no spirits of any kind." It is the color of protection.

Protection is needed in The Marriage of Opposites — there are infant deaths, pitiless mothers, stolen girls, people shunned for their religious beliefs or the color of their skin. The book is set at the start of the 1800s in a "cruel and beautiful world" — the oddly named town of Charlotte Amalie, on the Caribbean island of St. Thomas. I found it an irresistible wonderland.

It's in this land that readers meet the family of Camille Pissarro— the Impressionist painter who was raised on the island — starting with his mother. The first part of the book belongs to Rachel Pomie Petit Pizzarro (Camille changed the spelling of his last name as an adult), who has wished all her life to visit Paris, which she knows only from the maps of her merchant father. Meanwhile she's marooned within the intimate, stifling enclave of Jewish settlers who originally came to St. Thomas to flee the Inquisition.

Strong and passionate, Rachel is an odd duck. She wants more out of life. There have always been "whispers that her blood was made of molasses, which drew men to her even when they had no reason to desire her." She keeps a notebook in which she jots down stories to rival her beloved author, Charles Perrault, one of the originators of the fairy tale.

Rachel's first marriage, to a man nearly 30 years older than herself, is purely a business transaction. She finds bliss later, when as a widow she meets and marries her second husband, a Frenchman seven years her junior (her late husband's nephew). When the Jewish community casts her out because of the propinquity of the match, she reacts with fierce determination. "Then I dressed and readied myself for the world," she says, "driven by anger and desire, but perhaps that is always what drives a woman to fight back."

Hoffman's imagined story is grounded in rigorous history. The dates, names and basic events are real, while the circle of neighbors, friends and employees is fictional. These characters, though, have the heft of reality. Rachel's longtime best friend, Jestine, is particularly sympathetic, a dressmaker who creates gossamer gowns.

Pissarro, considered one of the greatest artists of the 20th century, is Rachel's favorite son. Hoffman takes Camille through his boyhood, spent among the working folk on the island, and into the early years of his painting career. I would have been happy to read further and see the twists of this pivotal artist's life. But perhaps it is as Camille says of a female elder: "She had an entire book of stories inside her, waiting to be told, but she didn't give anything away without a cost."

As in Hoffman's previous work, this book is richly painted with magical realism, as Rachel narrates: "It was the coldest day anyone could remember, and butterflies froze and fell to earth. There was a shimmer of blue and white on the ground. I stood and wept, and even my tears were cold. I still have the marks from that day, though they have turned to freckles."

The story takes many crinkum-crankum turns in The Marriage of Opposites. There's a busy panoply of characters, sometimes hard-to-track aunts and great aunts, myriad cousins and random stepfathers. Forbidden marriages abound. But underlying the relationships is a lavish Caribbean canvas: the parrots in the trees of Charlotte Amalie, its luscious coconut cake, the aromas of jasmine and frangipani and the red of the flamboyant blossoms.

And of course the haint blue sea.