Accessibility links
Review: 'Ricki And The Flash' Diablo Cody and Jonathan Demme offer a lovable portrait of a singer and guitarist in a better-than-average bar band.

Meryl Streep Shines In 'Ricki And The Flash'

Meryl Streep Shines In 'Ricki And The Flash' 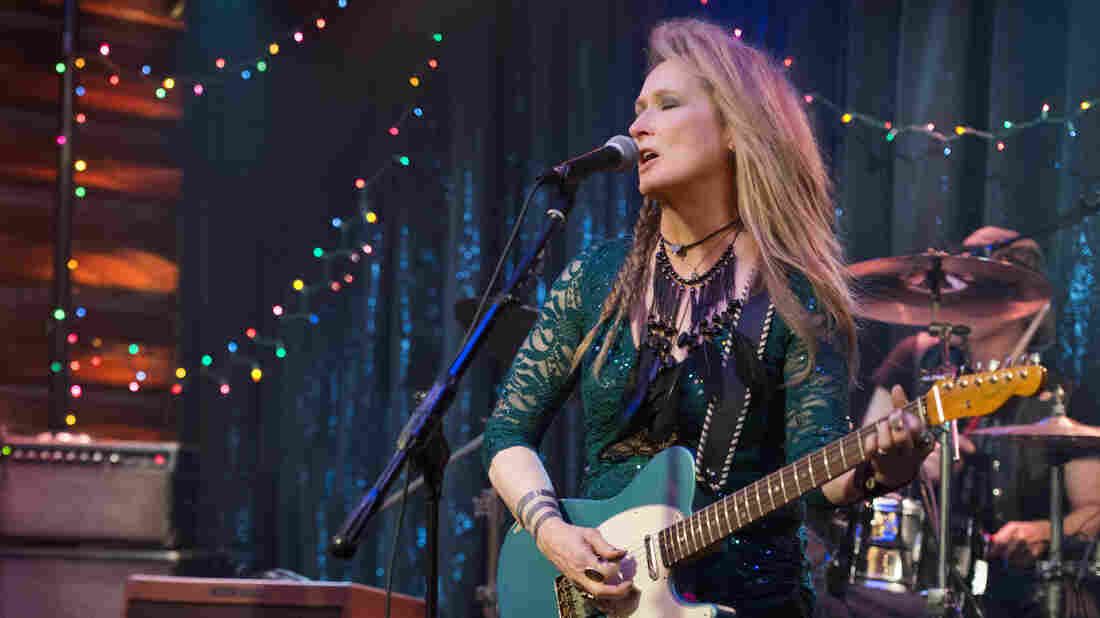 Ricky (Meryl Streep) performs at the Salt Well in a scene from Ricki and the Flash. Bob Vergara/Corutesy of TriStar Pictures hide caption 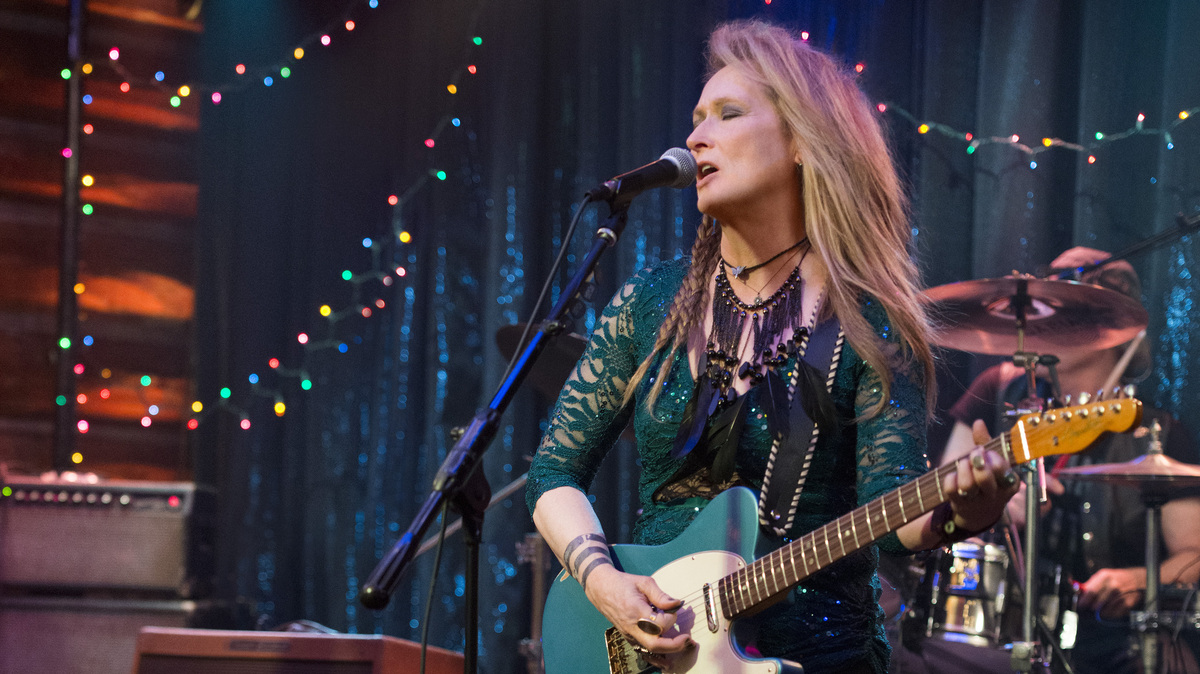 Ricky (Meryl Streep) performs at the Salt Well in a scene from Ricki and the Flash.

For the dozen or two regulars at The Salt Well in the San Fernando Valley, watching the house band is like stepping into a musical time machine, where everyone has aged but the song remains the same. By any standard, Ricki and the Flash rates as a better-than-average bar band, fronted by Ricki Rendazzo—a stage name that now almost poignantly reflects a long-forgotten dream of rock superstardom. They perform serviceable covers of Tom Petty and U2, and, with some reluctance, bust out the occasional song from the last few years to get the handful of under-40 people in the crowd on the dance floor. The lead guitarist has a thing for Ricki, but it mostly manifests itself as banter on stage and a casual romp on lonely nights, so long as it doesn't get serious. Playing at The Salt Well isn't a springboard to anything, but the last stop on the tour, a pleasant venue for a band slipping into obsolescence.

Written by Diablo Cody and directed by Jonathan Demme, Ricki and the Flash could be called Ragged Glory if Neil Young, Demme's friend and frequent collaborator, hadn't already taken the title for himself. In front of fossilized barflies, Ricki can get away with her black-leather wardrobe, her side braids and raccoon eyeliner, and her assortment of regrettable tattoos and tacky costume jewelry. But in the harsh light of day, she's just an odd-looking supermarket cashier named Linda Brummell, collecting $450 a week while a supervisor half her age asks her to smile more. As played by Meryl Streep, who can now add "play guitar" to the long list of things she can do as an actress, Ricki lives every day with the consequences of a choice she made long ago. She wanted to be a Chrissie Hynde. It didn't work out for her.

The film Ricki and the Flash looks like poor Linda Brummell inside a multiplex still humming with superhero movies, remakes, and remakes of superhero movies, but it also possesses her abundance of personality and soul. Against the machine-tooled blockbusters of summer, Demme's film stands out for its modesty of scale and its abiding interest in the untidy business of being human. To put it in rock terms, Demme and Cody don't care about putting on the perfect show; they care about putting on a great show, which can accommodate some looseness in the set.

Shortly after establishing the sad parameters of Ricki's life, which currently teeters on financial bankruptcy, the film whisks her away to Indianapolis, where her grown daughter, Julie (played by Streep's own talented child, Mamie Gummer) is reeling from a sudden divorce. Since leaving her own husband Pete (Kevin Kline) to pursue her musical ambitions, Ricki has been a woefully inconsistent presence in the lives of Julie and her two sons, Adam (Nick Westrate) and Josh (Sebastian Stan), who have long since taken to calling Pete's current wife (Audra McDonald) their mother. She looks out of place among the snobs in Pete's gated community and she scarcely does better with Julie and her other children, who use the opportunity to hammer her for past and present wrongs. Meanwhile, back in California, her guitarist Greg (Rick Springfield) seeks the type of deep commitment that she's been historically reluctant to give.

Ricki and the Flash doesn't behave like an ordinary musical drama, in that it's willing to abandon the music for the entire second act (and then some) to allow Ricki to work out the tension with her family. Their grievances with her are absolutely legitimate, as are the reasons she's become estranged from them: poverty, geographical distance, another woman assuming her role. Typical of many Demme films, there are no villains here, just the natural conflict between fundamentally decent people whose choices have put them at odds with one another.

Cody's script has the funny, feminist kick expected of the writer behind Juno and Young Adult, but like Charlize Theron in Young Adult, Ricki's attempt to cling to her rebellious past carries a devastating cost. She's both resilient for keeping the dream alive and a sad relic of another era, and Cody and Demme present her as the hot mess she is. Streep plays Ricki as lovably oblivious, but also wry and caring when the occasion calls for it, and earnest in her desire for some sliver of redemption.

Ricki and the Flash favors conventional dramatic payoffs, but at least they're hard-won, with Ricki fighting her way through class differences, ugly family history, and humiliation to find her place. Demme's humanity and optimism has been a hallmark of his work from Melvin and Howard to Rachel Getting Married. A warmth radiates through Ricki and the Flash like a song sung true. A film that adores its characters this much is sure to be adored in kind.