Accessibility links
A Hip-Hop Soundtrack For A Musical About Alexander Hamilton? Sure, Why Not? The new musical about the U.S.'s Founding Fathers — set to a mostly hip-hop score — that everyone's been talking about for months and months finally opens officially on Broadway Thursday night. 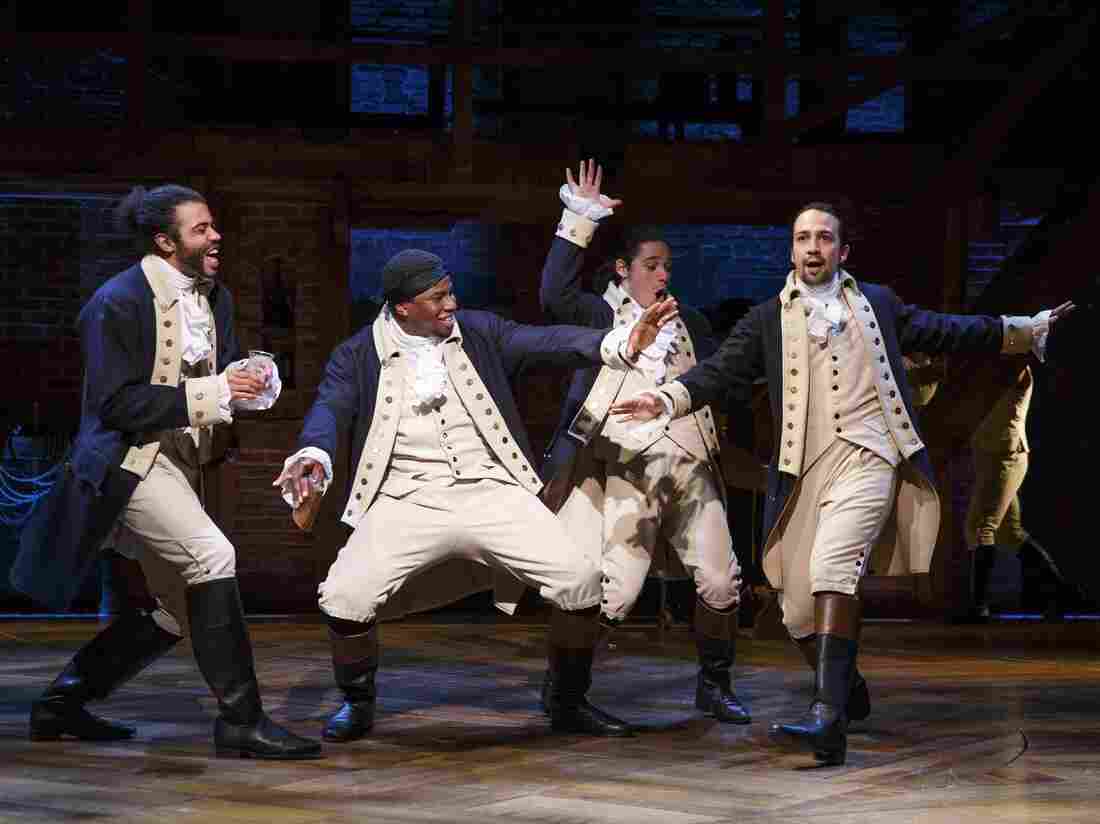 Hamilton, which opened Thursday on Broadway, is a play based on the life of Founding Father Alexander Hamilton. Joan Marcus/Shane Marshall Brown hide caption 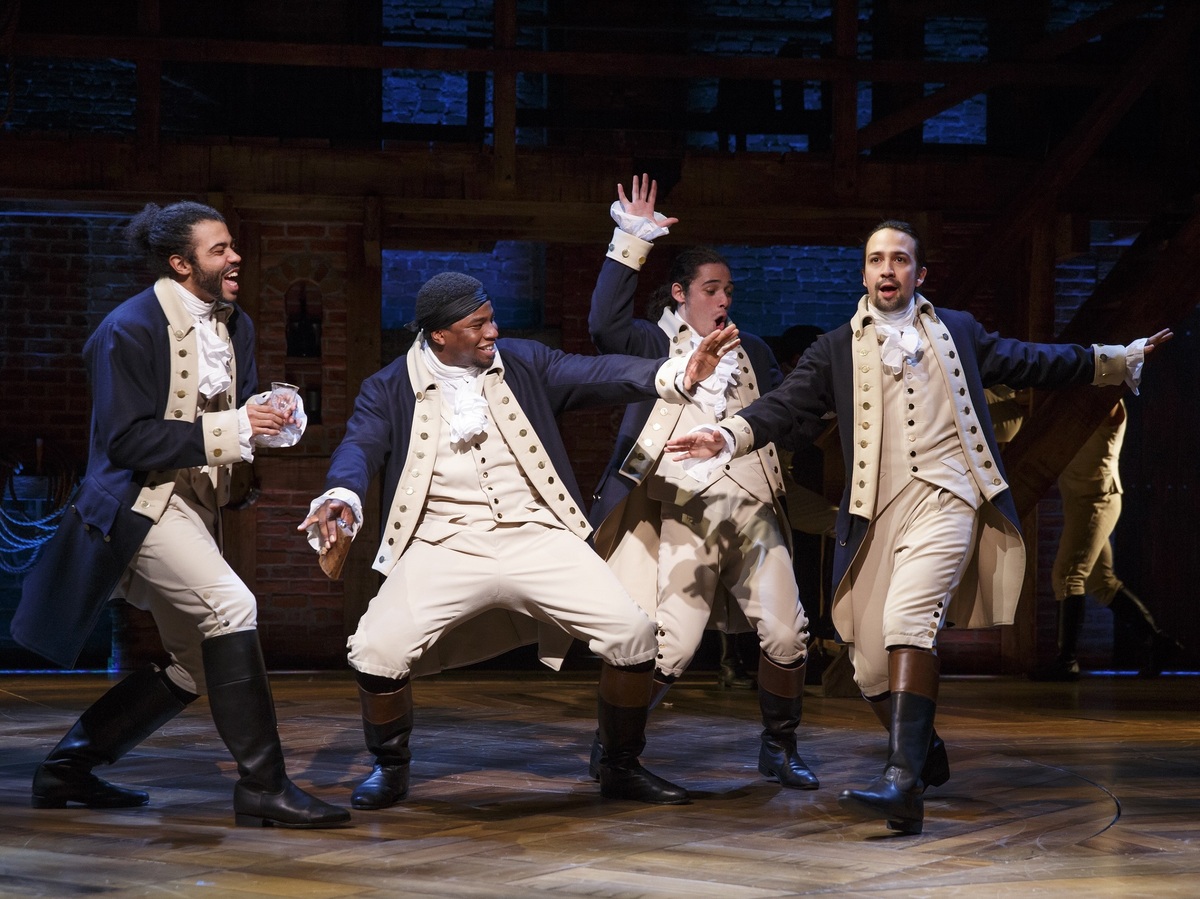 Hamilton, which opened Thursday on Broadway, is a play based on the life of Founding Father Alexander Hamilton.

By now, you may have heard about the new Broadway musical Hamilton. When it opened off-Broadway in February, it earned almost unanimous raves and awards for blending history and hip-hop. Its sold-out run had A-list celebrities and politicians clamoring for tickets. Thursday night, the story of Alexander Hamilton, and the Founding Fathers and Mothers, opened on Broadway.

Most people in the business expected Hamilton to move immediately from the Public Theater to Broadway, win a bunch of Tony Awards and be a big hit. Except writer and star Lin-Manuel Miranda and the rest of the creative staff felt the show still needed work. So they stayed put. "And thank God we did," says Miranda, "because we left the Public with four months of audience information, as opposed to three weeks. So, that's just more data, that's just more viscerally, 'cause I get to experience it onstage, so I viscerally know what works, and when I'm losing [the audience] and when I have them back. And there is no substitute for that experience."

Miranda still takes off one performance week to watch the show from the audience, with his alternate onstage. Think of this version as Hamilton 2.0. Despite all of the distractions of being at the center of the hottest musical in town, Miranda was still working on Hamilton with less than a week before the Broadway opening.

"The world can swirl around outside us, but today I have a new line to put in for 'Your Obedient Servant' that I have to add. Yesterday, I added five new lines. It's about keeping our head down and looking at the thing itself and not listening to the noise, but listening to the thing that got us here, which was us in a room figuring out what the best idea is and letting the best idea win. So, you know, the stuff going on outside the theater: wildest dreams, wildest expectations surpassed. And, inside, you know, I'm keeping my head down and trying to make the show good." 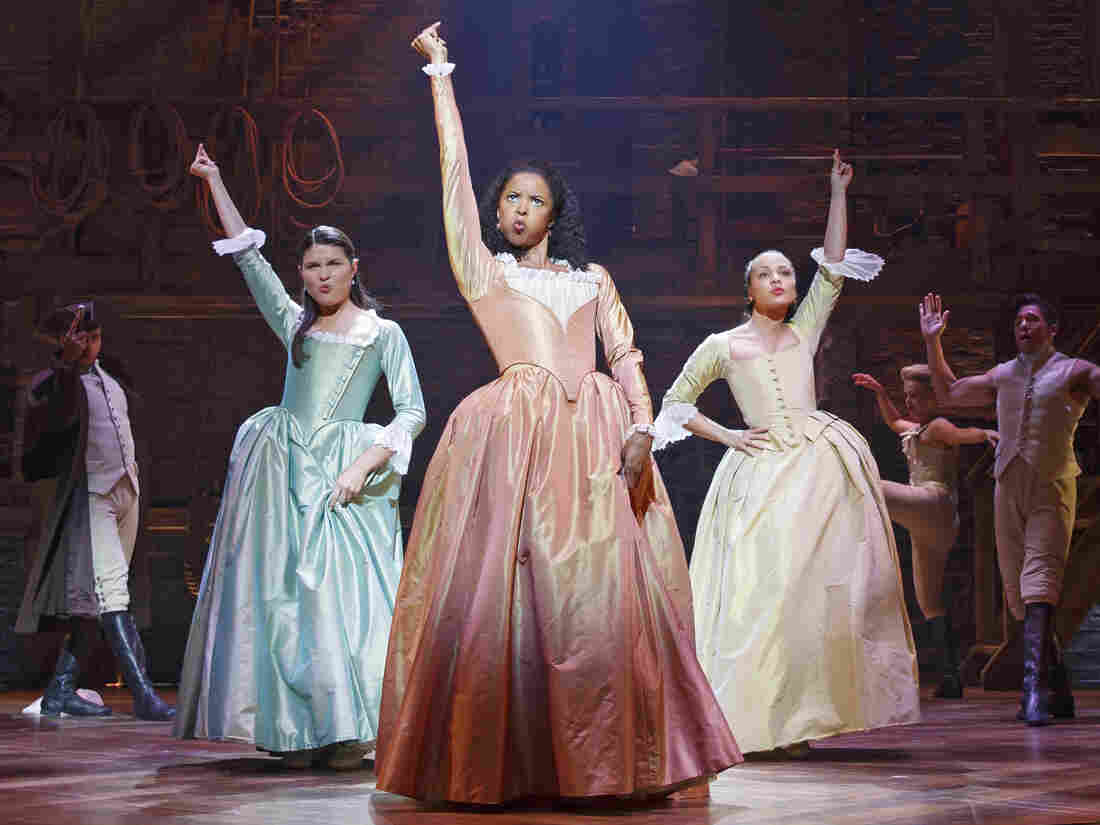 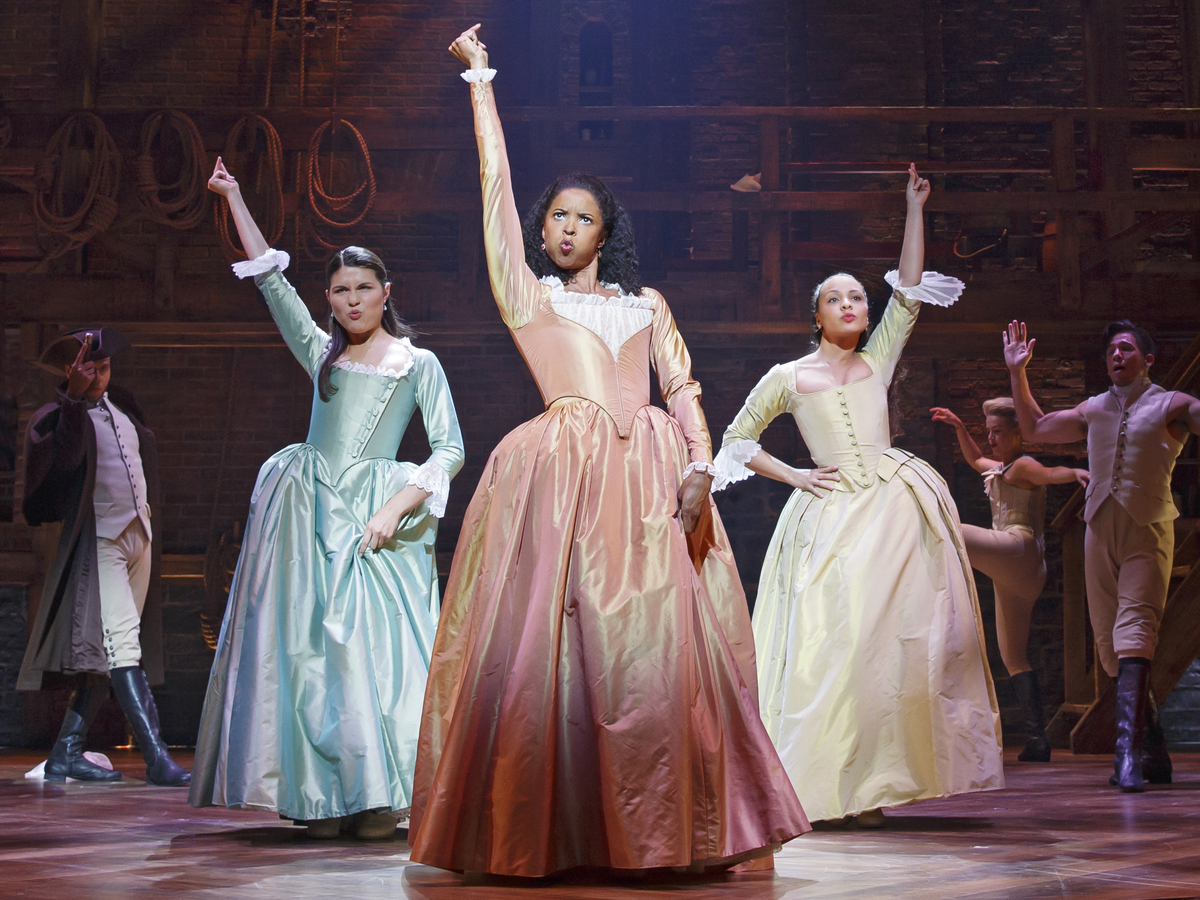 Lin-Manuel Miranda has been working on Hamilton for six years. It started with him sitting on a beach, reading Ron Chernow's 832-page biography of the country's first treasury secretary and realizing the story sang to him. He recalled, "I feel like a mosquito that hit an artery! That's how I felt when I read Ron Chernow's book; I just thought Hamilton's life story contains multitudes, particularly in the way Ron unlocked it — in the way that Hamilton is sort of the proto-American immigrant story, the trauma of his early years and how that kind of created a crack in the foundation."

For his part, biographer Chernow says he was initially skeptical that his book could be turned into a musical, much less one that uses rap as its main source of expression. But he agreed to meet with Miranda. "He came over to my house, he sat on my living room couch, he started snapping his fingers, and he sang the opening song," Chernow says. "And I absolutely marveled at what he had done, because I realized he had condensed the first 40 pages of my book accurately, into a four-and-a-half-minute song!"

"We are a very accurate representation of who we are, as a nation," says Phillipa Soo, who plays Hamilton's wife, Eliza. "And I feel like, in telling this story the way we're telling it with the people that have been chosen to be in the room together, we're very much an All-American cast."

That's the way Lin-Manuel Miranda saw it, growing up the son of a New York City political operative. His remembers the Christmastime spirit during his youth, saying, "When I was a kid, I would see two Santas every year; I would go see the white Santa at Macy's and then I'd go see the Dominican Santa at the ACDP Christmas party. And there was a brown Santa! And they were both Santa to me; do you know what I mean? When the character is mythic, I think we have license to believe in it, no matter what it looks like."

Leslie Odom Jr. plays Vice President Aaron Burr, who famously killed Alexander Hamilton in a duel. For him, the production has given him a sense of patriotism: "What it's done for me, as far as who is telling this story, is it has made me feel more American than I've ever felt before. This is our story; this is our history, too. We were born here. We pledge allegiance to the flag, as well. And so, for us to literally step inside these men and women's shoes and tell the story from the inside in that way, it gives us an ownership to the story."

One of the repeated lines in Hamilton is "who lives/who dies/who tells your story." And Lin-Manuel Miranda wants to make sure that this story is told by as many different people as possible, once the run on Broadway is done, years from now:

"When this is done as the school play, it opens up the show to the entire school, and that's something I'm really excited about. I fell in love with theater from doing the school play and finding who I was in it. And so I think I'm always writing a school play in my head."

Even as he's teaching audiences about people and events from over 200 ago.