Accessibility links
'May Allah Bless France!' Tells The Story Of France's Hip-Hop Gatekeepers Rapper Abd Al Malik, who grew up in the depressed suburbs of France, has turned his story into a soaring film memoir. 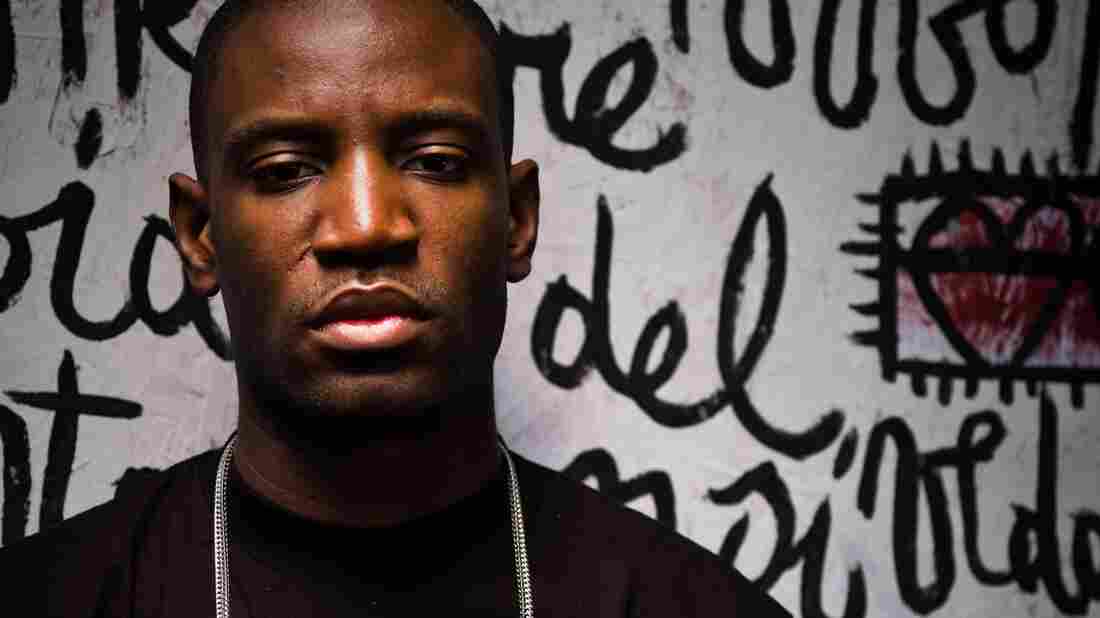 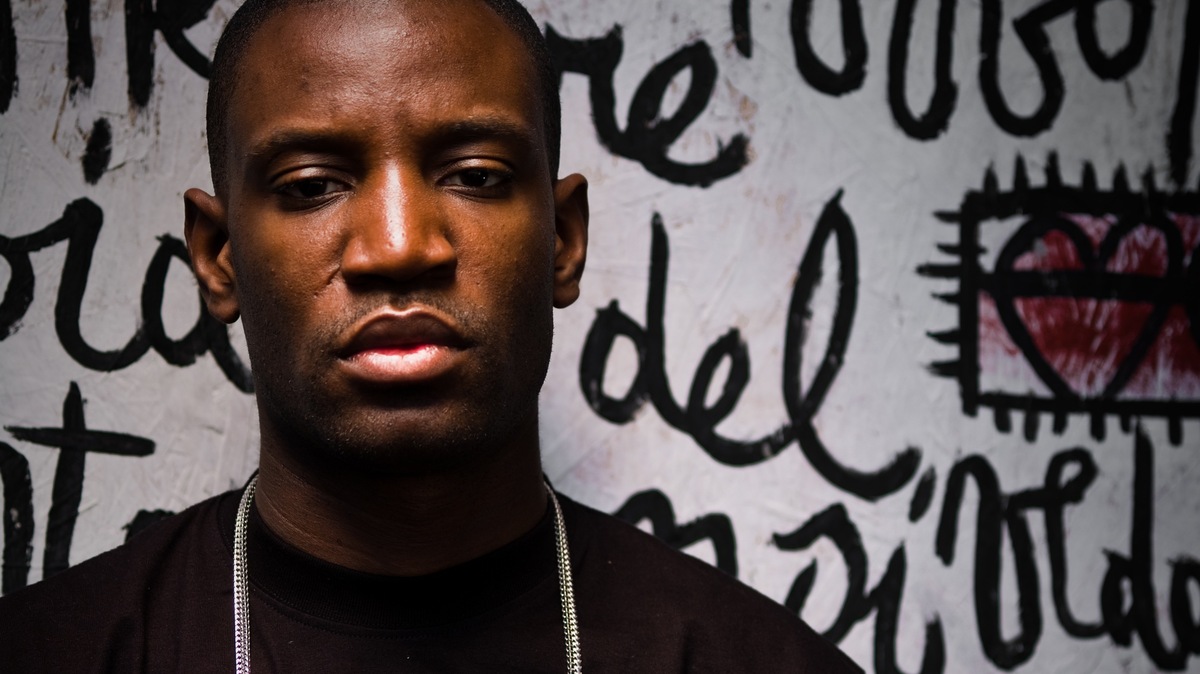 Think back to the 1990s — to movies like Boyz n the Hood or Menace II Society.

Now, imagine one of those movies shot in black and white, with prayer beads and scenes from a mosque. And imagine it all in French.

That's the recipe for the new film, May Allah Bless France!, opening in the US next week. The man behind the camera is also the character at the heart of the film. His name is Abd Al Malik, and he's a big deal in France. He's a best-selling rapper, a poet and an acclaimed author, and, now, a filmmaker.

A slim and youthful 40, Al Malik was born to Congolese Catholic parents but is an observant Muslim. He says May Allah Bless France! isn't just a hip-hop movie.

"My movie isn't just a visual exercise — it's deeply political," he says. "It has political value because it can be useful to the community."

That community is in the depressed suburbs of France. The film opens with a montage of black and brown faces against the tower blocks of the city of Strasbourg. Cut to images of SWAT teams breaking down doors in the neighborhood and wrestling with suspects under arrest.

These are the same communities that have been under scrutiny since the attacks at Charlie Hebdo earlier this year. It's where so many of France's millions of Muslim immigrants live, and, as in the communities they mirror in the US, hip-hop is the soundtrack here.

On the song "Tin Soldier," Al Malik recounts the violence he saw as a young man. "I'd seen death by overdose, firearm, blade or rope," he raps. "A smile and some attention may have made a difference. We'd have been normal and not child soldiers."

It's this song that helped make him a star in France nearly 10 years ago years ago, when he says the music needed a dose of reality.

"There are a lot of misperceptions about urban culture and hip-hop, so as a rapper I wanted to bring some truth to this from the voice of someone who knows that reality," Al Malik explains. "I want to do the same with Islam. The people who experience this every day, unfortunately, can't speak out for themselves, so that's what I wanted to do."

If you're going to understand the French Muslim experience, you have to listen to hip-hop — at least according to author Hisham Aidi. He's written about Muslim youth culture in his book Rebel Music: Race, Empire, and the New Muslim Youth Culture.

"France is the second biggest market for hip hop in the world outside the US. Some of the leading hip-hop artists in France are Muslim, either the children of immigrants or converts," Aidi says. "So Muslim artists are really the gatekeepers of hip-hop culture in France, and Abd Al Malik was one of the pioneers."

May Allah Bless France! is the story of how he reached that point. It begins on the streets of Strasbourg as a teenage Al Malik is shown swaggering across the street on his way to school, thinking out loud, spitting rhymes.

"My library, my books are my only bling bling," he raps. And that scene is a good example of what he brings to the music, Aidi says.

"He's one cerebral rapper. This is a man who said that French hip-hop artists are the children of Public Enemy and Jacques Derrida," he says of Al Malik.

But while that complicated mix of hip-hop and postmodern philosophy was swirling in Al Malik's mind, violence and gunfire were all around him. The film shows drug deals, funerals and police raids — all familiar sights to someone who grew up like Al Malik, the rapper says. 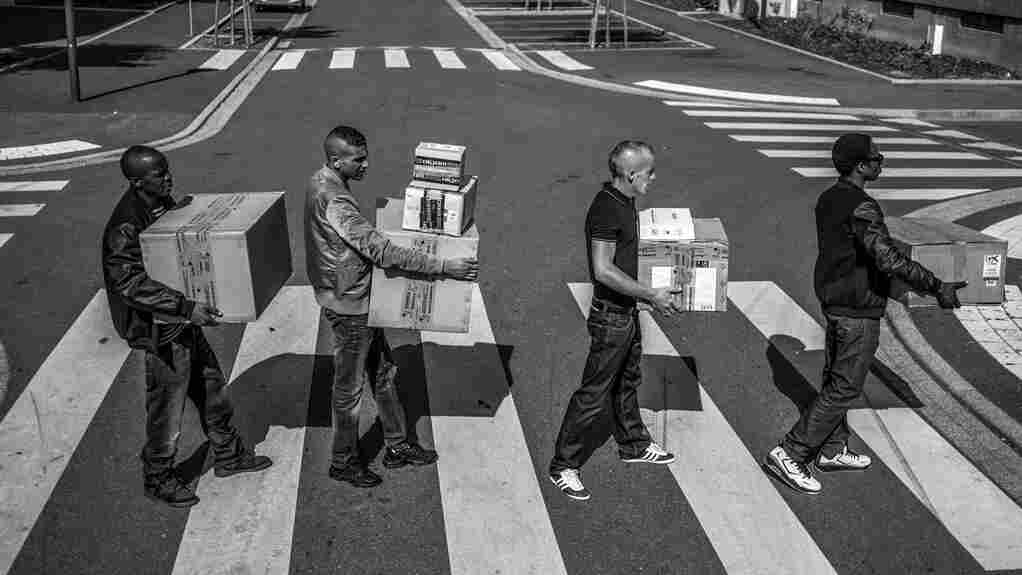 A still from May Allah Bless France! Courtesy of Strand Releasing hide caption 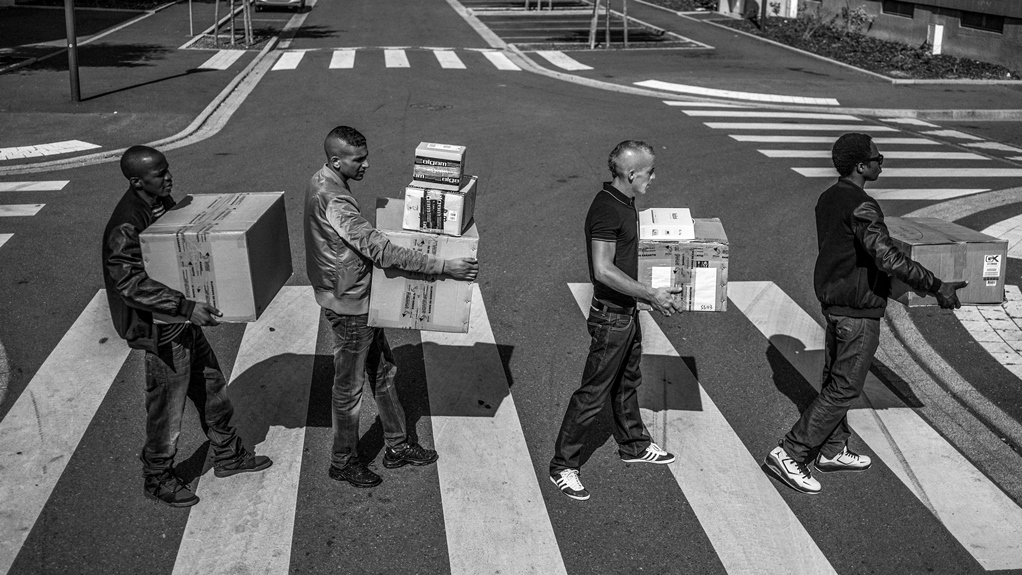 A still from May Allah Bless France!

"In the banlieues, or the suburbs, things can quickly turn to tragedy because of what these kids are exposed to everyday. I've seen people die with my own eyes because they think they're invincible, that they're Scarface in their own movie. They're dying from drugs, heroin and just living a dangerous lifestyle," he says.

Abd Al Malik got pulled into that toxic mix as a teenager. He says at the heart of the problem is the fact and he and his friends didn't feel French. There's a scene early in the movie in which Al Malik and his friends have been arrested for throwing stones at cops. His irritated uncle bails them out, but he's not just angry about the crime. He warns them about knowing their place.

"In the film, when the Uncle says, 'We love this country but this country doesn't love us,' that's really the problem," he says. "Symbolically, the French Republic is the mother of all its citizens. And as a mother, it should love all its children with the same amount of love, maybe even more for those who are fragile, the weaker ones from the suburbs."

Abd Al Malik says education helped him become stronger, and the title song from his film makes that point. He says the song is about extremism feeding on ignorance, and finding the solution in education.

"We have to teach religion in schools," he says. "There's a lot of talk but children don't really have access to knowledge. If they really knew what Islam is really about, they wouldn't be fooled by any radical preacher who tells them that Islam is X, Y or Z. They would know better."

But some young Muslim rap fans dismiss Al Malik, saying he has been co-opted by the French government. It doesn't help that in 2008 he was named a Knight of the Order of the Arts and Letters by the Minister of Culture.

Al Malik says what his critics don't understand is that French ideals and Muslim ideals are the same.

"The values of the French Republic — freedom, equality, and fraternity — those are also values that you can find in Islam. The problem isn't values. The problem is communication," he says.

Since the attacks at Charlie Hebdo, he's pushed even harder on this message, trying to educate both his community and the French establishment on what it means to meet in the middle.

But when asked what he sees as the highpoint of his artistic life so far, he pauses.

"I'm not sure how to answer that kind of question, because I look ahead, and I hope the best is yet to come. But one thing I'm very proud of is that I'm the kid from the bottom of the bottom of the heap," he says. "I'm the kid that everyone told, 'You won't be able to study. You can't write, make music, or become famous.' And I've done all of those things. I have more films in the works and I hope there's plenty more to come, and that's the most important thing: that nothing is set in stone, and that nothing is predetermined."

Abd Al Malik's first film May Allah Bless France! comes out in the U.S. next week.