Accessibility links
Life Through The Lens Of A Falling 'Fishbowl' Bradley Somer's new novel follows (literally) Ian the goldfish, who's catching glimpses of life and love in the apartments he passes as his bowl plummets from a 27th-floor balcony.

Life Through The Lens Of A Falling 'Fishbowl'

Life Through The Lens Of A Falling 'Fishbowl' 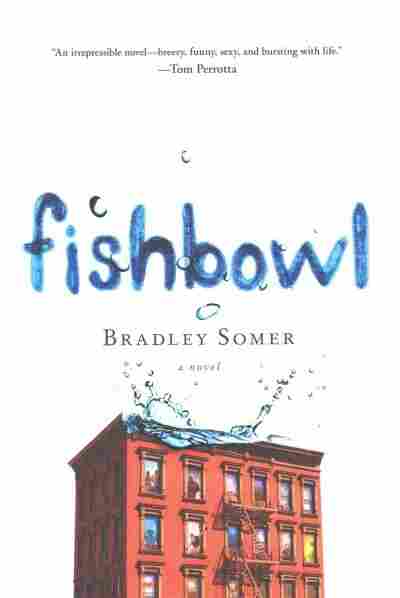 Lars von Trier's films Melancholia and Antichrist both open the same way, with catastrophe playing out in beautifully rendered, ultra slow motion. One calamity destroys the Earth and the other only claims the life of one toddler, but both films have the same feeling of presenting disaster as a sort of pregnant pause, played out so exquisitely that viewers have to appreciate the technique even as they're given plenty of time to register and mentally protest the terrible but inevitable results.

Imperfections author Bradley Somer borrows von Trier's technique for his second novel, Fishbowl, and makes the stakes even smaller: As the book begins, a goldfish named Ian begins to plummet from the 27th floor of an apartment building. This story plays out with slow deliberation over the course of the book, amid philosophical musings about the nature of buildings and so much time spent on Ian's limited intellectual capacity that he recalls the dim-witted, cheery whale falling from the sky in Douglas Adams' The Hitchhiker's Guide To The Galaxy.

Ian's fall is the result of events in his 27th-floor apartment, and as he shoots toward the ground, he gets glimpses of other lives in other parts of the building. The book only covers about 30 minutes of the residents' time, but they're eventful minutes, encompassing a birth, a death, sex, a relationship-deciding fight, and a relationship-creating revelation. Many of them cross over with each other, sometimes via chance meetings, and sometimes in crucial collisions.

But Somer's grandiose opening statements about the vast complexity of human life and existence are more of a burden than these soap-operatic little stories can bear. "The heartbreaking sweetness of love, the rending hatred, the slippery lust, the sorrow of losing a family member, the pain of loneliness, all thoughts that were ever thought, every word ever said and even those which were not, the joys of birth and the sorrows of death and everything else will be experienced here in this one vessel," he promises in the opening pages. That's a big promise for anyone to fulfill, let alone someone writing about relationship squabbles and elevator repair.

Somer is fascinated with his characters' inner workings. A shut-in who works a sex line, a lonely superintendent, a construction worker with a secret, a home-schooled kid, and a pregnant lady (who improbably discovers she's having a premature breech birth when she looks down to see a small blue foot hanging out of her nether region) all get separate rounds of exposition and inquisition, as Somer explores their thoughts with exhausting microscopic interest. In particular, one inadvertent threesome — Ian's grad-student owner Connor, his casual lover Faye, and his much-less-casual girlfriend Katie — have plenty of time for long, ruminating musings as two of them clamber up and down those 27 flights of stairs.

Fishbowl has a touch of whimsy in its framing story, and in the animated flipbook images in the margins, which track Ian's descent and spoil his eventual fate. And there's a similar whimsy built into some of the interlocking stories, given the contrast between the shut-in's messy profession and her obsessive-compulsive fastidiousness, or the construction worker's repeatedly emphasized vast masculine bulk and his personal sideline.

But Somer tends to focus excessively on infinitesimal detail. His exploration of Katie's rage and angst over her three-month relationship with Connor, or the superintendent's isolation, or the kid's obsessiveness, feel claustrophobic. They're perpetually at odds with his narration's attempts to make all this busyness seem significant and universal, or at least emblematic of humanity as a whole.

Readers may be reminded of novels like Armistead Maupin's Tales Of The City (at least the first book in the series, before events got outsized and wacky) or anthology films like 1995's Four Rooms, where shenanigans in a hotel are separated by walls, but still interact. But Fishbowl lacks the rollicking sense of lightness and building momentum of these stories. Its attempts at existential gravitas — at conveying that buildings are fractal boxes of individuals, who are in turn infinitely packed full of thoughts — limits its ability to move past the moment and find some momentum.

And Somer's ultimate metaphor, that we're all conceptually just plummeting fish, rocketing helplessly into the unknown, feels like it's straining for profundity. Fishbowl reaches its delirious height during a ridiculous, thoroughly enjoyable nonsense sidebar about how fish have secretly, historically yearned to fly. With so much weight piled on its other moments, it has nowhere to go from there but down.