Accessibility links
Out Of Long-Gone Rubble Of The Watts Riots, Scars And Signs Of Healing It's been 50 years since deadly violence wracked South Los Angeles. But memories of the race riots linger with residents. In Watts' decades of recovery, they see lessons for today's racial tensions. 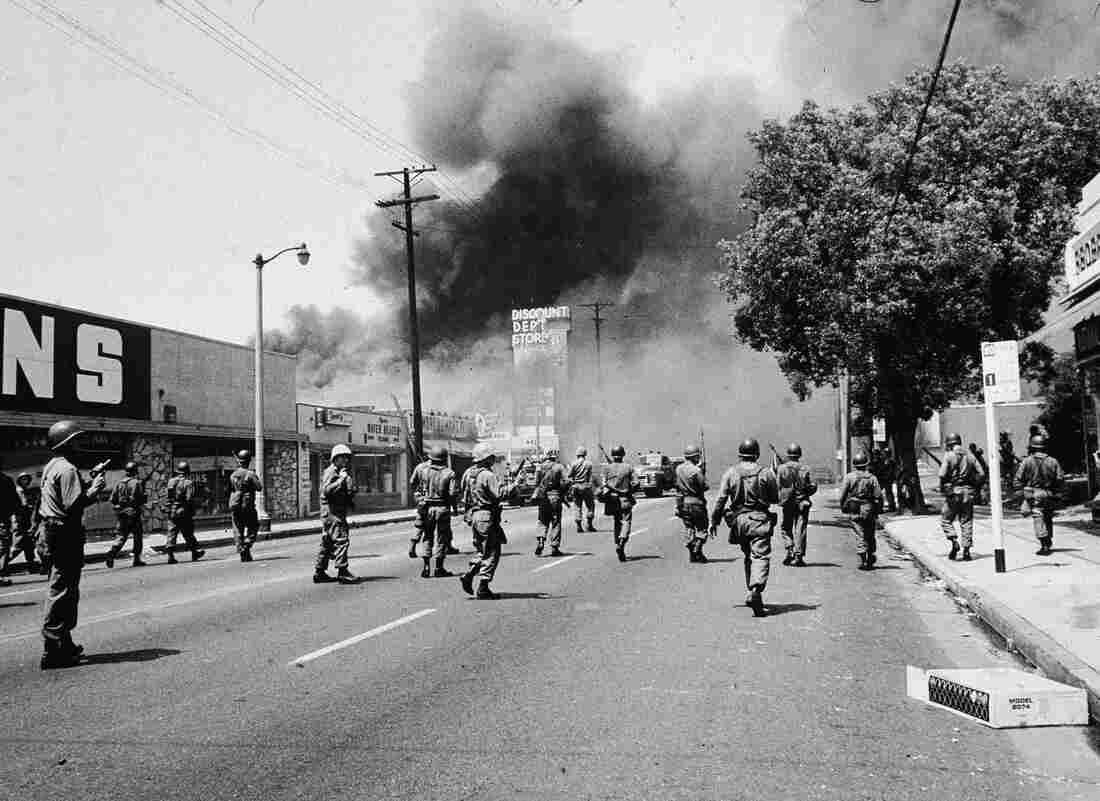 Armed National Guardsmen march toward smoke on the horizon during the street fires of the Watts Riots in Los Angeles. After six days of unrest, over a thousand people had been injured — and 34 had died. Hulton Archive/Getty Images hide caption 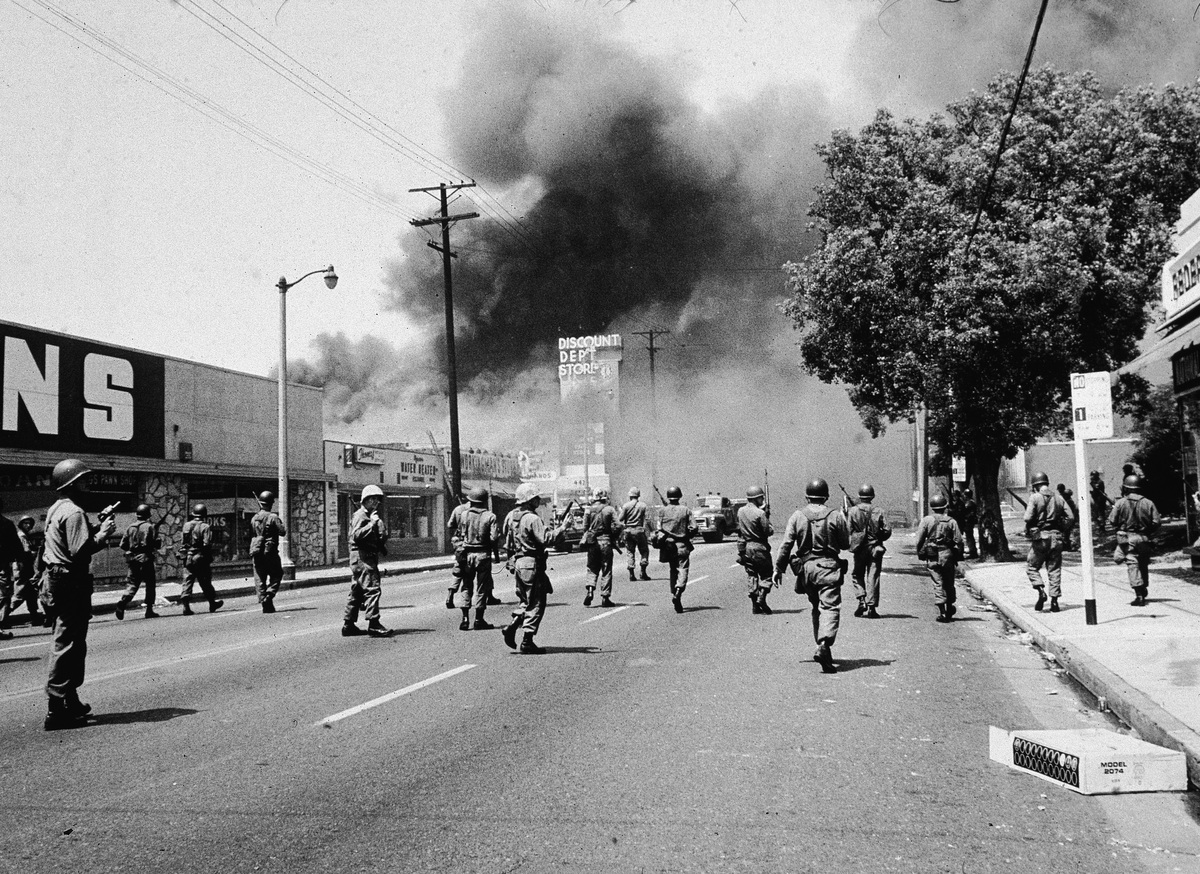 Armed National Guardsmen march toward smoke on the horizon during the street fires of the Watts Riots in Los Angeles. After six days of unrest, over a thousand people had been injured — and 34 had died.

Dr. Perry Crouch was 16 years old the day that the violence started in Watts. It was August 1965, when the Los Angeles neighborhood was wracked by six days of turmoil — and Crouch saw firsthand the moment that sparked it.

As he remembers, he stood nearby as another African-American Watts resident, Marquette Frye, was pulled over by a California Highway Patrol officer for drunk driving.

"I was right there when [the officer] started calling him 'nigger boy' and all that stuff right here," Crouch remembers. "And his mother say, 'His name is Marquette. You don't have to call him like that.' He told her, 'Shut up, you black bitch, stay in your place.' And then people was like, 'I knew he didn't say that.' "

A later investigation by a state commission said that the officer's actions that night were justified. At the time, the commotion attracted a crowd, curious about what was going on between the officer, Frye and Frye's mother.

"Officer told her, 'Get your black ass out the way, don't be interfering,' and pushed her," Crouch recalls. "When he pushed Ms. Frye, then him and Marquette got to tussling. Then she jumped on his back.

The unrest, which came to be known as the Watts Riots, lasted nearly a week. While there had been — and would later be — other race riots in the '60s, the violence that happened in Watts was especially destructive and deadly. More than a thousand people were injured; more than 100 were shot. And 34 people died — 23 of whom were killed by the police and National Guard. Two law enforcement officers and a fireman were among the dead.

Crouch takes issue with the language that was often used to describe what happened — phrases like "insurrection by hoodlums" and characterizations of LA as "reminiscent of war-torn cities." Crouch describes the unrest differently, as a rebellion rather than a riot.

"People were angry and that was the way to relieve that anger," he says. "It was a rebellion. It was an uprising. You see, a riot has no purpose. This was that spark everybody needed."

There were many reasons for anger in Watts. In addition to long-running tensions with the police, the neighborhood had a legacy of housing discrimination, unemployment and poor education opportunities.

Crouch says that if there had been no traffic stop that night, it was inevitable that something else would have sparked the uprising. 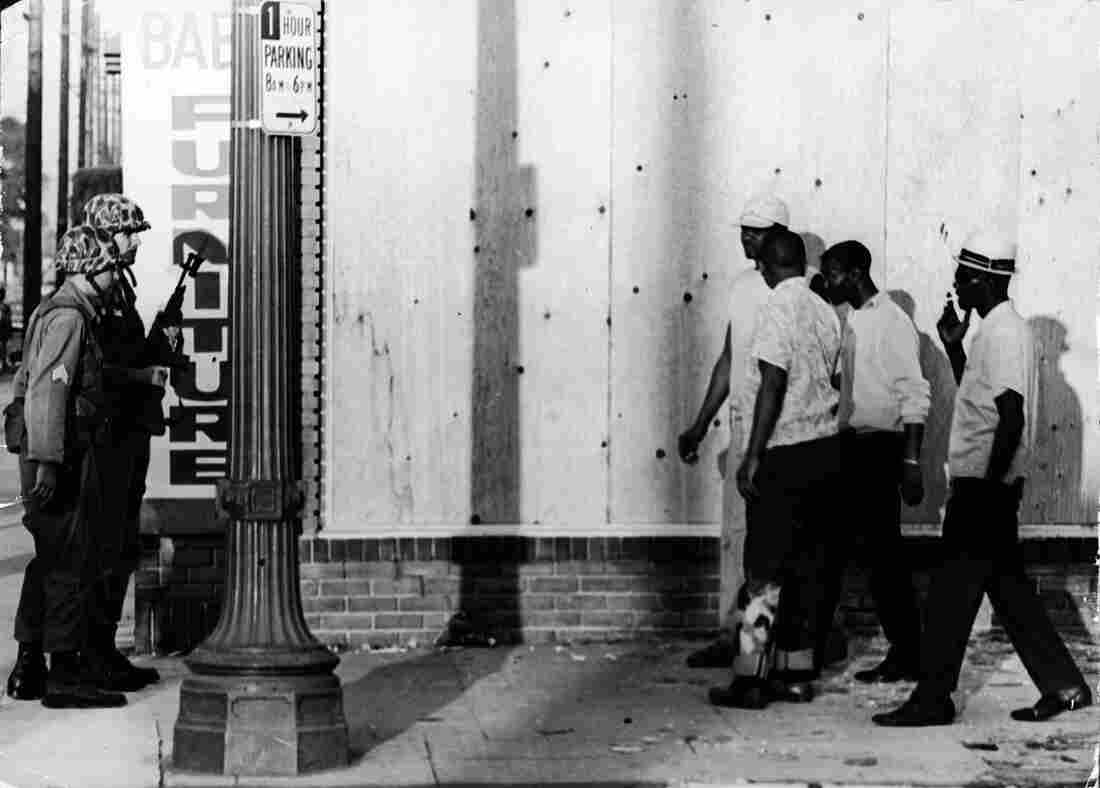 A group of African-American men are confronted by state troopers with bayonets at a street corner in the Watts neighborhood of Los Angeles. Express Newspapers/Getty Images hide caption 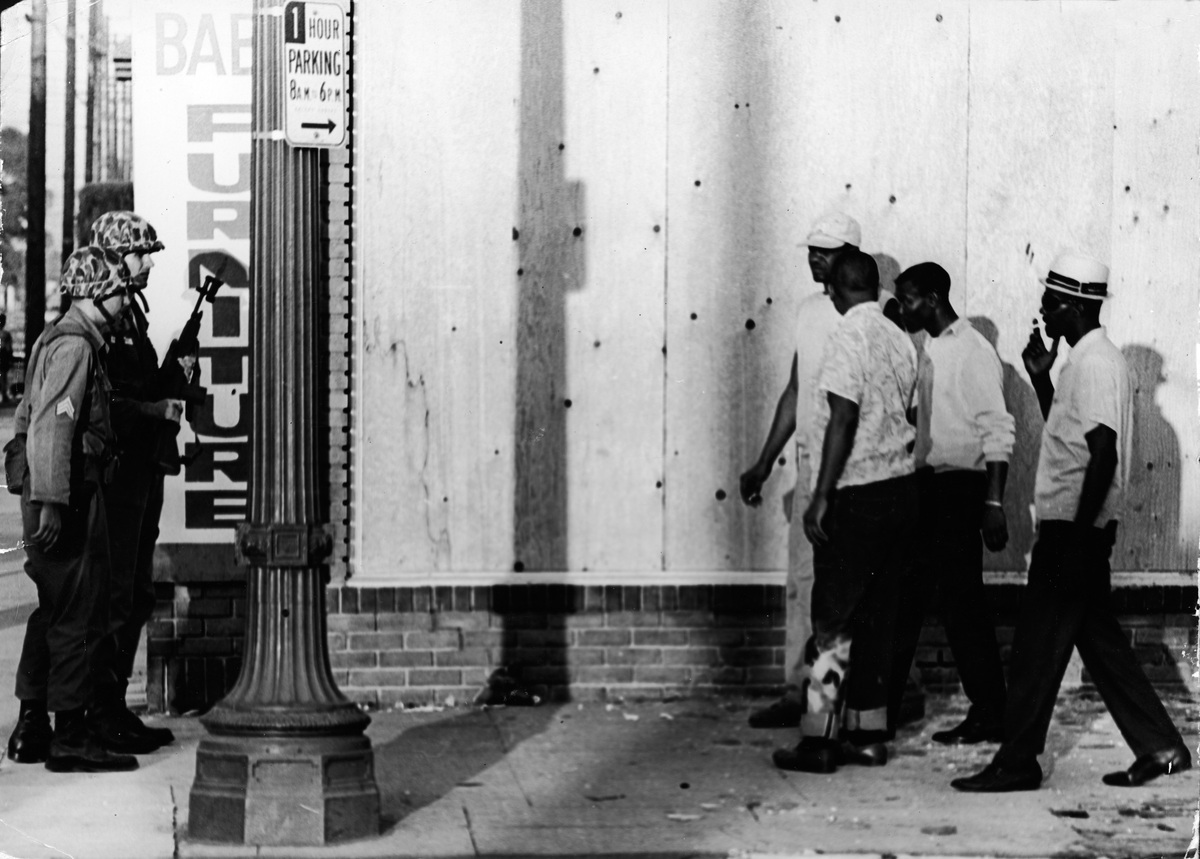 A group of African-American men are confronted by state troopers with bayonets at a street corner in the Watts neighborhood of Los Angeles.

Rebuilding From The Rubble

Fifty years later, standing in the area of Watts hardest hit by the violence, Crouch says that the police were content to let the destruction continue.

"They were just letting people loot stores, throwing the Molotov cocktails and all that stuff in the stores. And the Los Angeles police didn't really do anything until the National Guard came in."

In the end, hundreds of buildings burned to the ground. That left a lasting mark on the neighborhood.

Chris Jordan, another community organizer from Watts, says he still sees the scars the riots left on his community. "Major stores and vendors were here on a 103rd [Street]," he says. "When all of that was burned out, you can tell that that did not come back."

Desiree Edwards, the owner of one of the few sit-down restaurants in the area, says that Watts still has a long way to go.

"You know, there needs to be another grocery store over here, gas station closer," she says. "You know, little things like that — just more service."

There have been other setbacks since 1965 — the crack epidemic, the 1992 LA riots, gang violence across the years — but Crouch says there's no escaping the ways the community has changed for the better.

"See how freely kids are just riding their bike, how freely people are just walking to and from," he says. "Back in the day, that would've never happened."

Jordan says the community has also transformed their relationship with the police.

"One of the major changes that happened from '65 and the police relationship is that now they have great respect for community leaders," he says. "And so when Dr. Perry comes on the scene, there's no 'Hey, you get out of here.' There's no disrespect."

Crouch has earned that respect from both the police and his fellow residents partly for his work brokering a peace treaty between rival gangs, and for his efforts to get guns out of the community.

"We got them to see us as a partner," Crouch says. "And they got to seeing us doing certain things to make their job easier. Like community leaders, our job is crowd control."

He thinks it's much less likely that a police conflict today could spiral into the kind of violence Watts saw 50 years ago.

Perry Crouch says that, while things are by no means perfect in Watts today, there may be lessons here for activists in Ferguson, Mo., and other communities across America facing racial tension between residents and law enforcement.

But he hopes those lessons don't take 50 years to learn.