Accessibility links
Forget The Wreckage: Museums' Katrina Shows Look At How City Has Moved On As the 10th anniversary of the hurricane's landfall approaches, art museums across New Orleans focus on how the city sees itself today. In other words, no ruins and no people trapped on roofs. 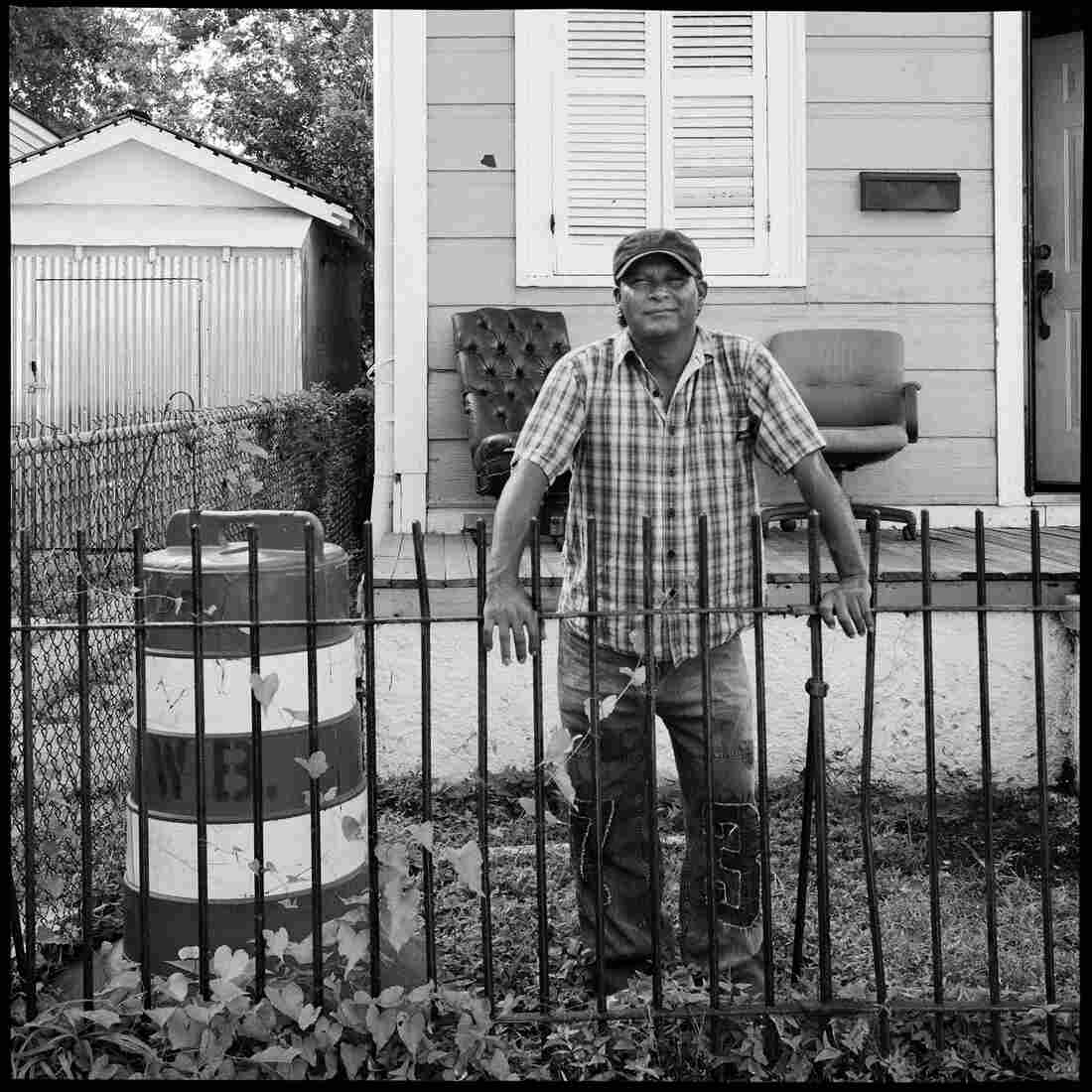 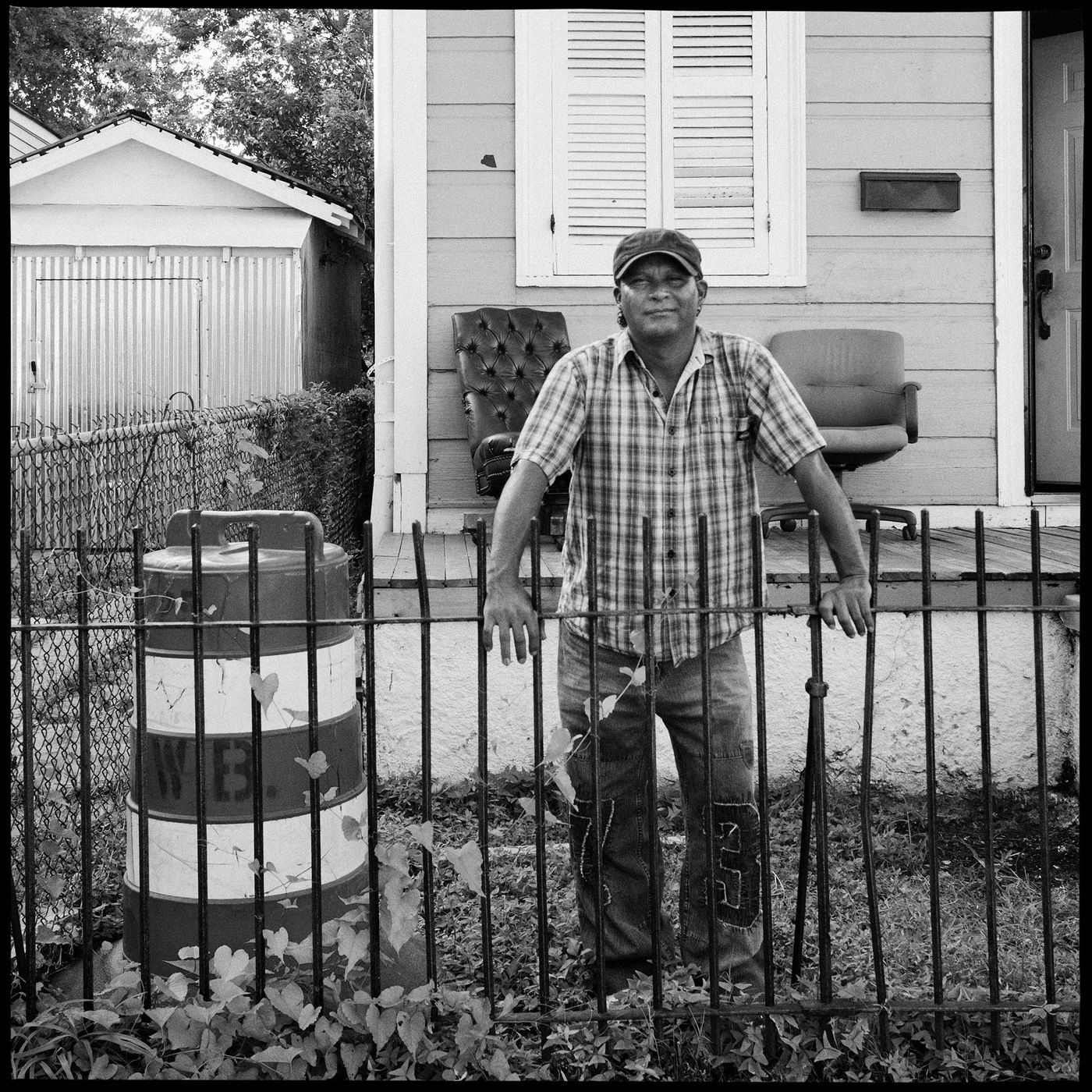 Jonathan Traviesa/Courtesy of the Ogden Museum of Southern Art

Anniversaries call for exhibitions, and art museums across New Orleans felt compelled to remember Hurricane Katrina as the 10th anniversary of its landfall approaches. But the anniversary shows at some of the city's most high-profile museums seem surprisingly understated, at least to outsiders' eyes. In fact, they barely seem to be about Katrina at all.

"I didn't know that's what it was," says one baffled tourist when he's informed he's in the middle of a Katrina-related show called "The Rising" at the Ogden Museum of Southern Art. Evan Smith of Birmingham, Ala., looks around at photographs of gay teenagers, Latino migrant workers and oil refineries. "I didn't know that, no," he says.

Curator Richard McCabe knows his showcase of the city's up-and-coming photographers doesn't exactly scream Katrina. He tells a group of students, "I was a little worried about doing this because I wanted to do something about the 10-year anniversary but there was no way I could go back and relive it through photographs because they were just too painful."

"The tourists would love to see those pictures," he says ruefully, "because a lot of people think half of New Orleans is still underwater, you know?"

McCabe curated this show for a city with a long and illustrious history of photography. Back in the early 1900s, photographer E.J. Bellocq documented New Orleans' brothels. (His career was later fictionalized in the movie Pretty Baby.) Today, New Orleans' photography scene is more vibrant than ever, according to McCabe. He wanted to take control of the imagery with a fresh exhibition that shows how the city sees itself now.

"We've done, at this institution alone, like 20 Katrina shows," he observes.

The same problem bedeviled Russell Lord, curator of photographs at the New Orleans Museum of Art. Lord also decided against including explicit Katrina images in his anniversary show, "Ten Years Gone," partly, he says, because of what they could trigger. 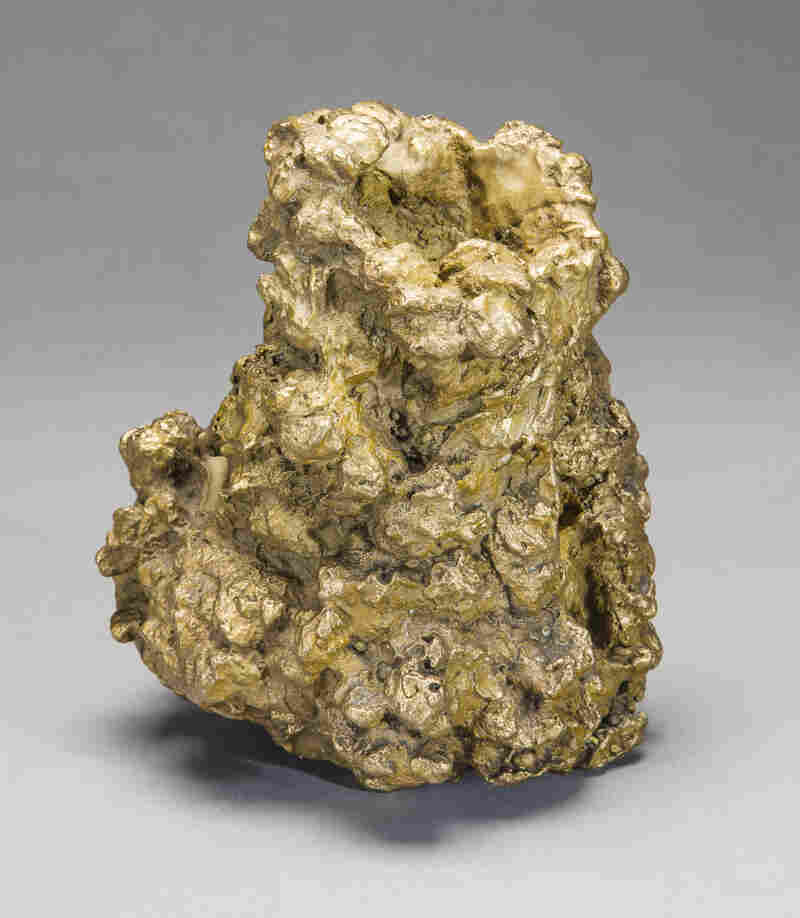 Willie Birch's Crawfish Dwelling is made from one of the many crawfish homes that Birch found in his backyard after Katrina. Courtesy of Willie Birch and Arthur Roger Gallery hide caption 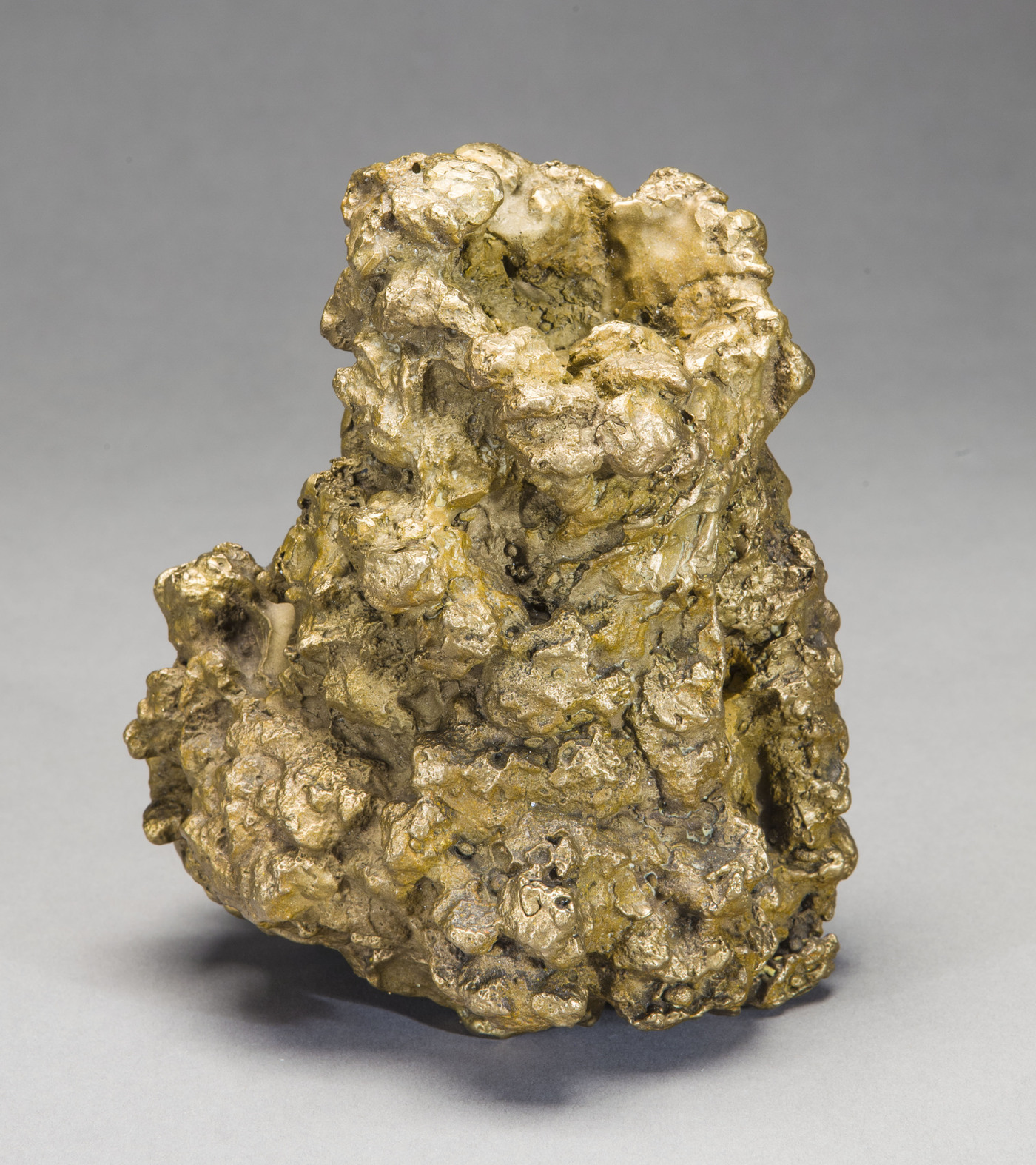 Willie Birch's Crawfish Dwelling is made from one of the many crawfish homes that Birch found in his backyard after Katrina.

"Psychologists and psychiatrists are kind of preparing for this moment and preparing for an onslaught of those kinds of images and the effect they might have on people in terms of PTSD," he says.

So Lord went abstract. His show explores themes like time, memory, loss and transformation. One room in the show is filled with little bronze lumps about the size of a fist. They're grimy and filled with holes.

"They're crawfish dwellings," Lord explains. "They create these mounds for survival."

The artist, Willie Birch, is a New Orleans native who grew up kicking over dried crawfish mounds. In his un-air-conditioned studio in New Orleans' 7th Ward, Birch explains that he found more crawfish dwellings in his backyard after Katrina than he'd ever seen before, so he cast them in bronze.

"These are incredible little critters," he says. "So how can I use them? I can use them to make metaphor as a signifier for survival."

The New Orleans Museum of Art also commissioned work for "Ten Years Gone" by New Orleans artist Dawn DeDeaux. She made tall, thick, polished acrylic slabs that seem to be filled with water. Each piece is named after conversations she heard after the storm while waiting in lines at places like the Red Cross. " 'Oh, I only got 4 feet' or 'I got over 8'; 'I topped in at 6.' No one even had to use 'water,' " she says. "You knew what they were referring to. Everyone was concerned about: How much water did you get?" 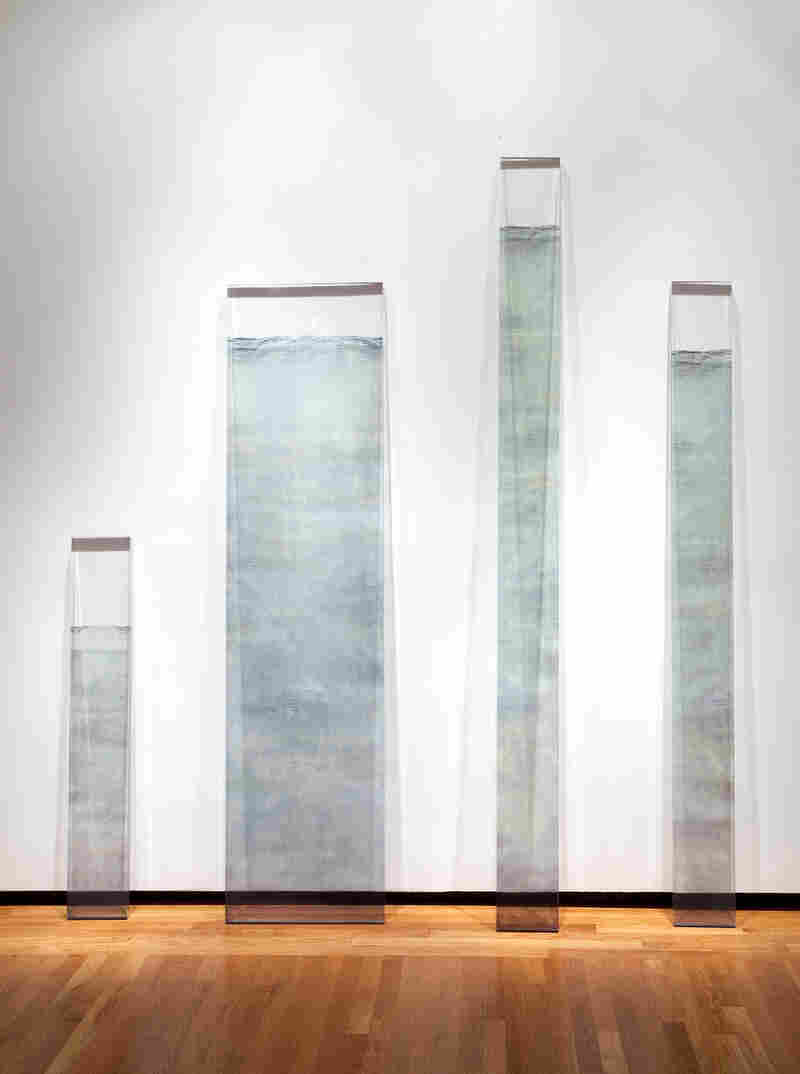 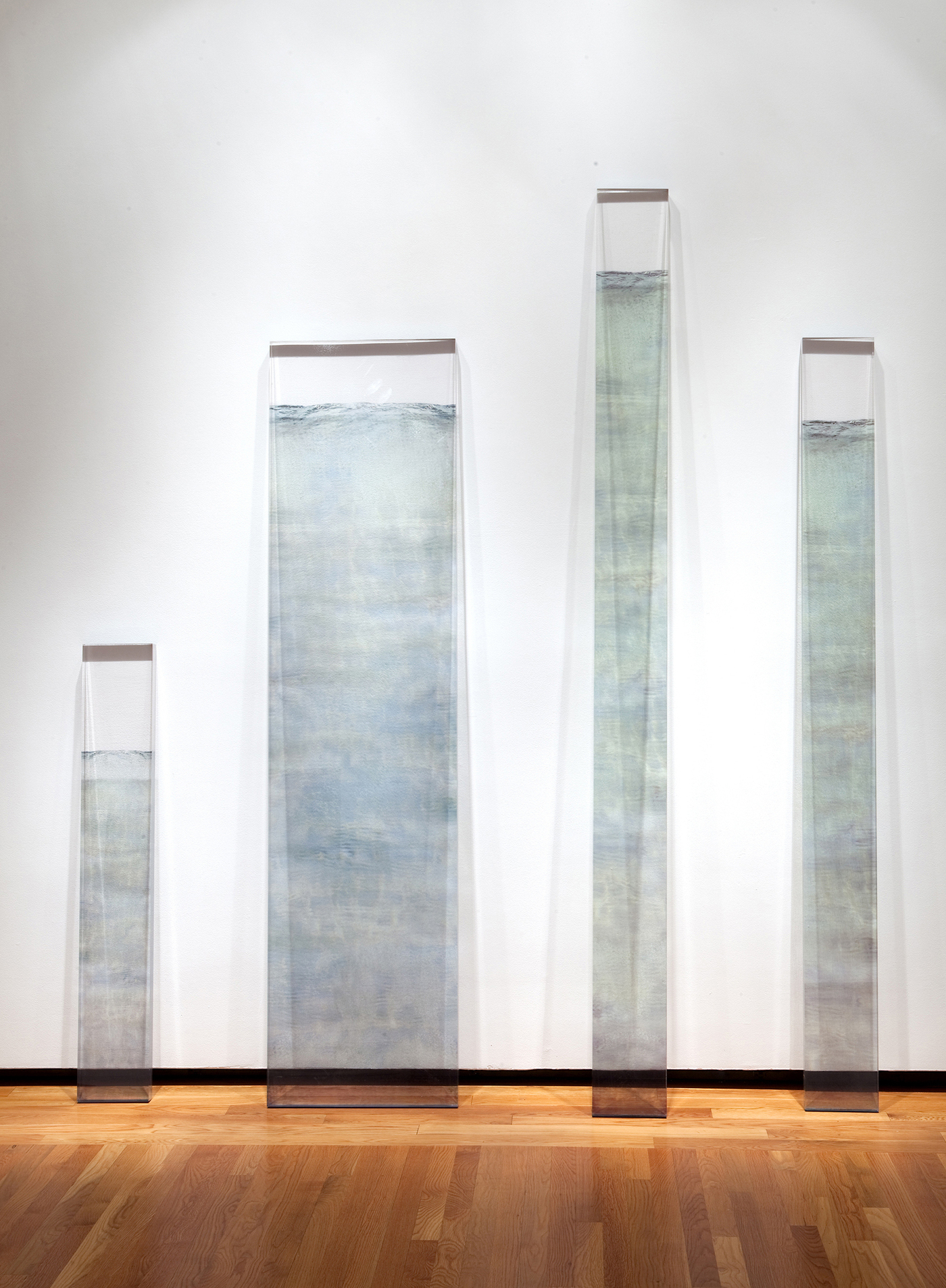 And then DeDeaux makes a startling Katrina confession: "I learned this about natural disasters: They're also quite beautiful." She recalls being in a mall parking lot where all the windows were blown out by the storm. It was filled with glass. "Then, all of a sudden, the sun came out and I was standing in a field of diamonds," she says. "All of a sudden, everything was glistening. It was extraordinarily beautiful. And I was shocked to hear myself utter — there I am in tears: 'Oh my gosh, this is so beautiful.' "

DeDeaux says she wanted her work commemorating Katrina to reflect that experience — "to both be frightening, and also beautiful."

Meanwhile, a show called "REVERB" at the city's Contemporary Arts Center takes the anniversary as its starting and ending point. Director Neil Barclay says their show isn't actually about Katrina — they're more interested in what the city's artists have been doing ever since.

The 10th anniversary of Katrina's landfall (in late August) hasn't even passed yet, but the city's curators are already looking ahead to the next landmark. Richard McCabe at the Ogden jokes with a couple of photographers in his Katrina show (that's not really about Katrina) about having to curate another one in five years.