Accessibility links
After Katrina, New Artists Found Inspiration In A Recovering City At New Orleans exhibits commemorating the 10th anniversary of the hurricane, NPR's Neda Ulaby found three artists who said they wouldn't have become artists if it hadn't been for the storm. 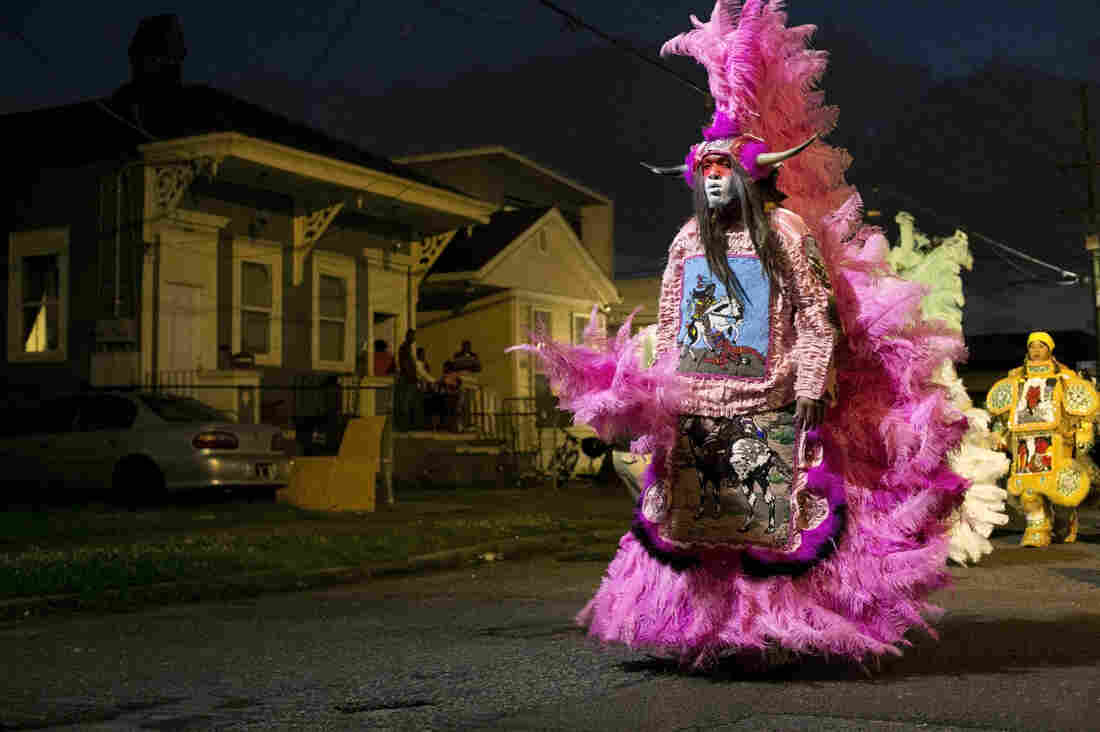 Skylar Fein had only lived in New Orleans for a week before Hurricane Katrina nearly tore it apart. He'd moved there to go to medical school, and found himself wandering around a wrecked city. "It's really hard to describe to someone who hadn't seen it what the streets looked like after the storm," he recalls.

Fein is among other New Orleans artists exhibiting work in shows commemorating the 10th anniversary of the 2005 storm. One thing he has in common with some of the other artists: They weren't artists before the hurricane hit.

From his tool-filled, tin-roofed warehouse studio in the St. Claude arts district, Fein remembers the scene in the streets: "Not only was there wood in the street in every conceivable color, but the contents of entire houses. Washers. Dryers. Televisions. Blenders. I still have kitchen appliances I pulled out of the street."

Fein found four table legs — "matching!" he exclaims — and decided to use them to make a table to replace one he'd lost in the storm. But the top looked cool — so cool, that a local architect bought it to hang above his drafting table. Soon other architects began commissioning similar pieces for themselves. 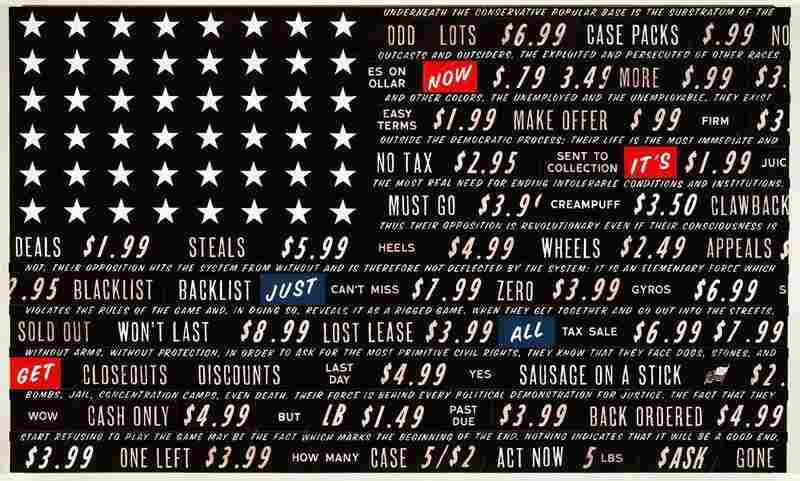 Skylar Fein had just moved to New Orleans when Katrina hit. He made Black Flag for Herbert Marcuse in 2010. Courtesy of Skylar Fein hide caption

"They got it was made out of the wreckage of the storm," Fein says. "And it was a way of taking the destruction and the pain — sadness — but making it into something beautiful. And tame the destruction, but represent it."

After the storm, Fein says, lots of people who lost everything felt they had nothing else to lose, and decided to do things they'd dreamed of doing, but had been too frightened to try. 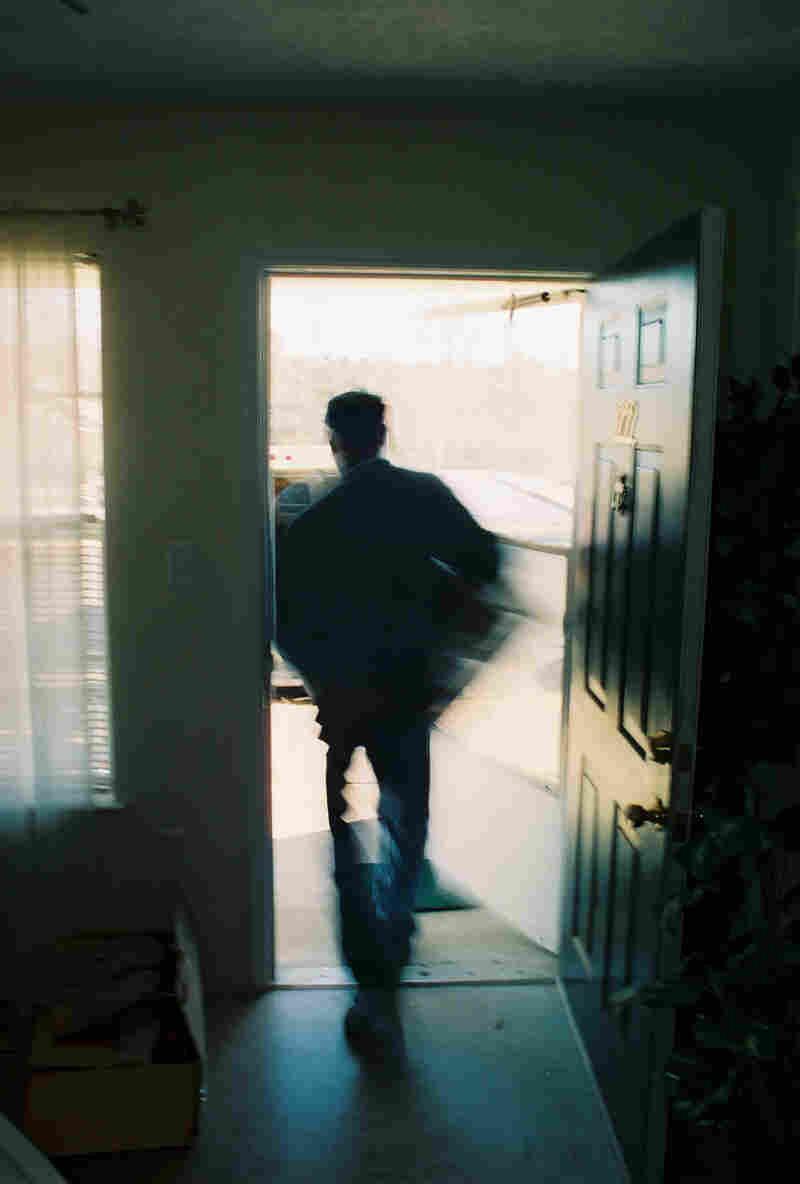 "I didn't become a photographer until Katrina," says L. Kasimu Harris. His gentle, measured portraits of ordinary New Orleanians are included in an exhibit called "The Rising" at the Ogden Museum of Southern Art in New Orleans that reflects on the city's changes after the storm. When it hit in 2005, Harris thought he'd be a reporter. He'd left his hometown, New Orleans, just 10 days before the storm for grad school. His mother, father, sister and her two kids were evacuated. The entire family moved into Harris' one-bedroom apartment for months, watching images of their collapsed city in shock.

But a professor at the University of Mississippi gave Harris an assignment: Go back and report on what happened.

"Katrina helped me fall in love with photography as a tool to tell stories," Harris says, reflectively. 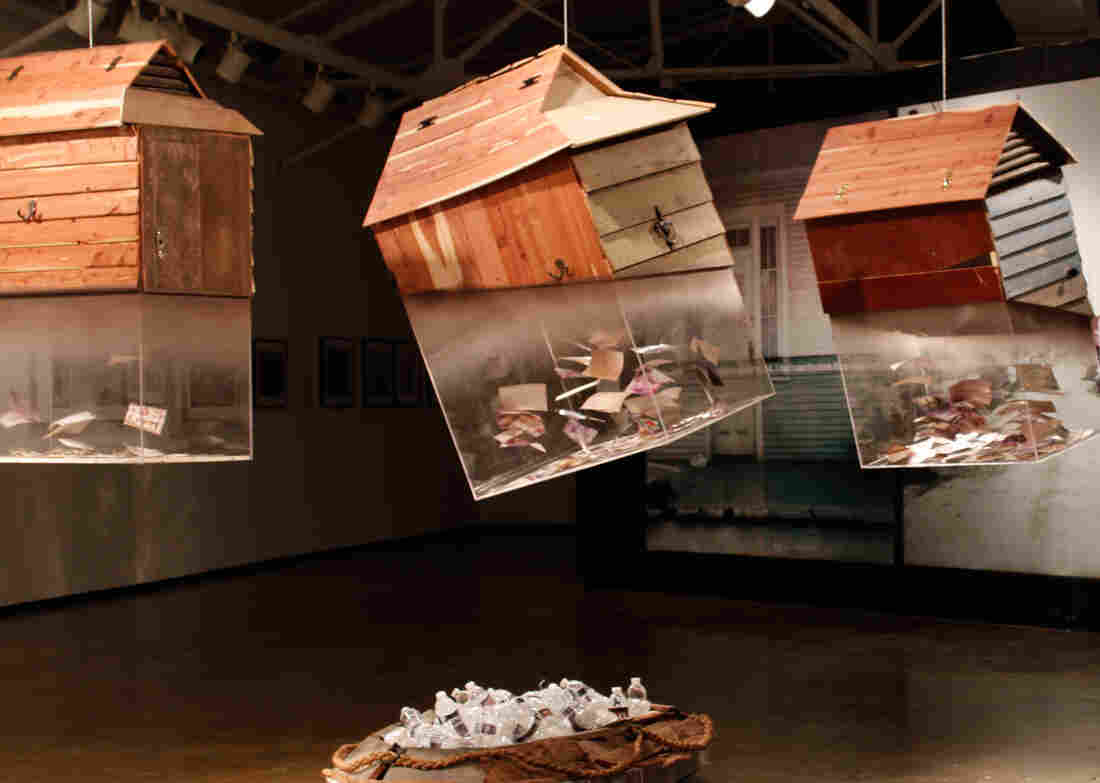 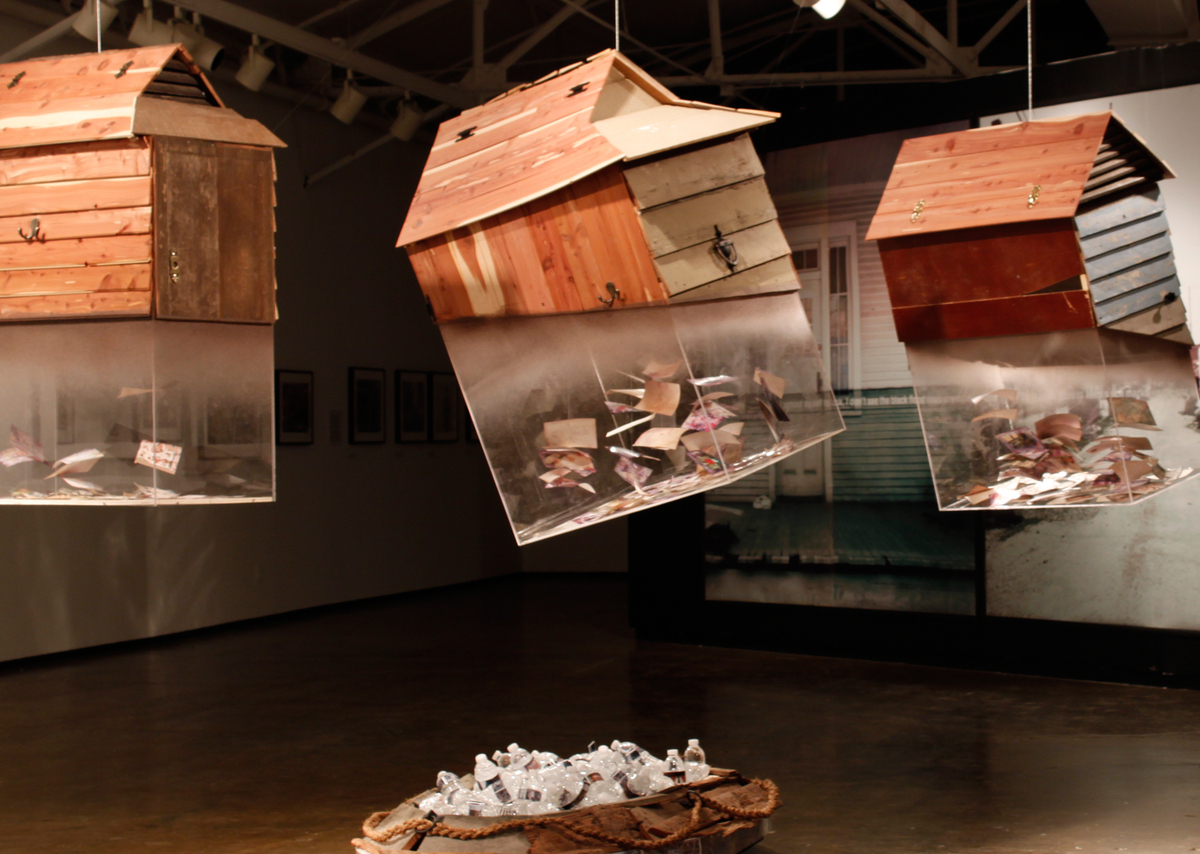 Like Harris, Rontherin Ratliff was born in New Orleans, and he didn't consider himself an artist either, although he worked in graphic design. When Ratliff left after the storm, he got sick of constantly being asked to tell his Katrina story. "So I decided I was going to take that story and make art out of it," he says. 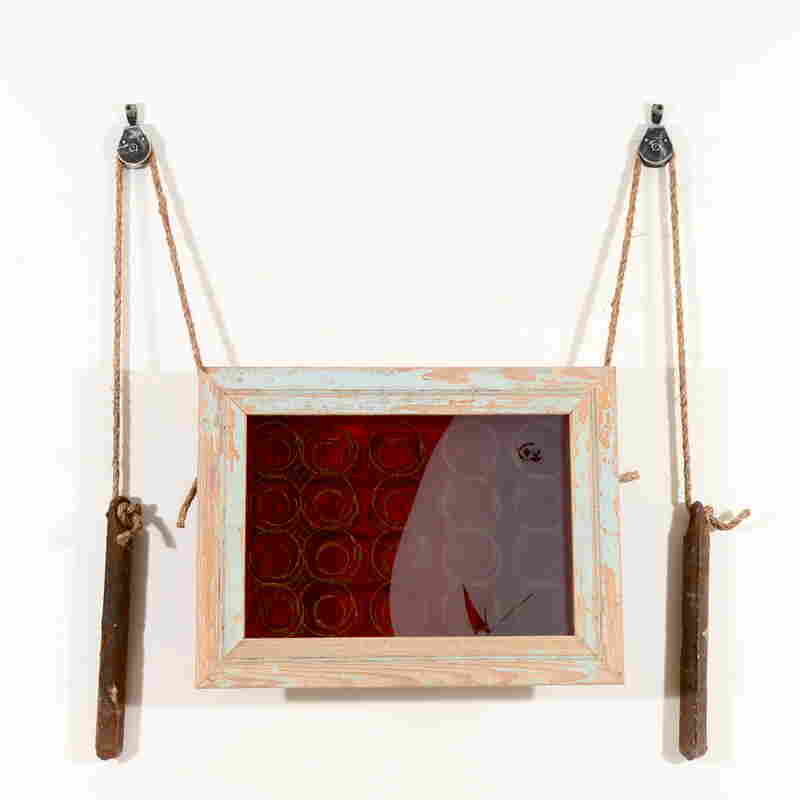 Ratliff, who cannot swim, floated through the Upper Ninth Ward in a blow-up raft to attempt to save his family's valuables after the storm. Above, his 2014 work Nurtured. Ana Hernandez/Courtesy of Rontherin Ratliff hide caption 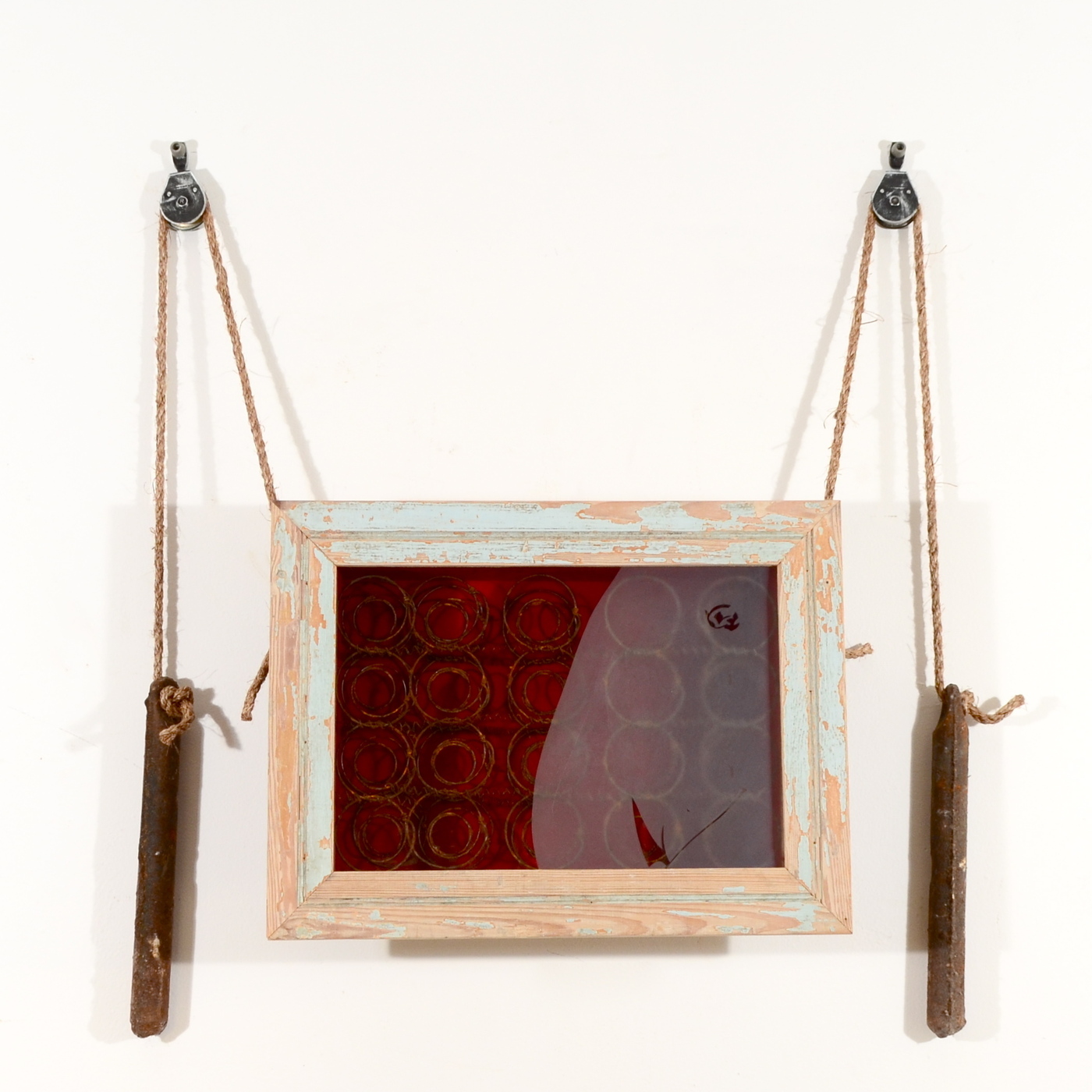 Ratliff, who cannot swim, floated through the Upper Ninth Ward in a blow-up raft to attempt to save his family's valuables after the storm. Above, his 2014 work Nurtured.

It's an intense story. Ratliff can't swim, but he floated over the Upper Ninth Ward in a blow-up raft to try to save his family's valuables. He remembers how the sun cut through his grandmother's drowned house, while he scooped up piles of her ruined photographs. Those water-stained mementos are now part of a sculpture hanging from the 10-foot ceiling of his studio in an old downtown office building. Things that Float is a tilted house, made of storm debris and plexiglass — and those photographs. It took months for Ratliff to figure out how to express himself in three dimensions.

"It forced me to spend time processing those experiences, and kind of gave me that time with my thoughts," he says. "It's a little therapeutic, you know?"

The work Ratliff created out of destruction is on display at the Contemporary Arts Center in New Orleans. So is Skylar Fein's. Without diminishing the storm's terrible impact, Fein says Katrina fostered a drive and a do-it-yourself ethos that helped redefine him as an artist.