Accessibility links
Thumbs Up, Then And Now: Hitchhiking Stories From The Road Hitching a ride at the side of the road used to be a common practice, but now it's rarely heard of. So where have all the hitchhikers gone, and what does hitching look like in modern-day America?

Thumbs Up, Then And Now: Hitchhiking Stories From The Road

Thumbs Up, Then And Now: Hitchhiking Stories From The Road 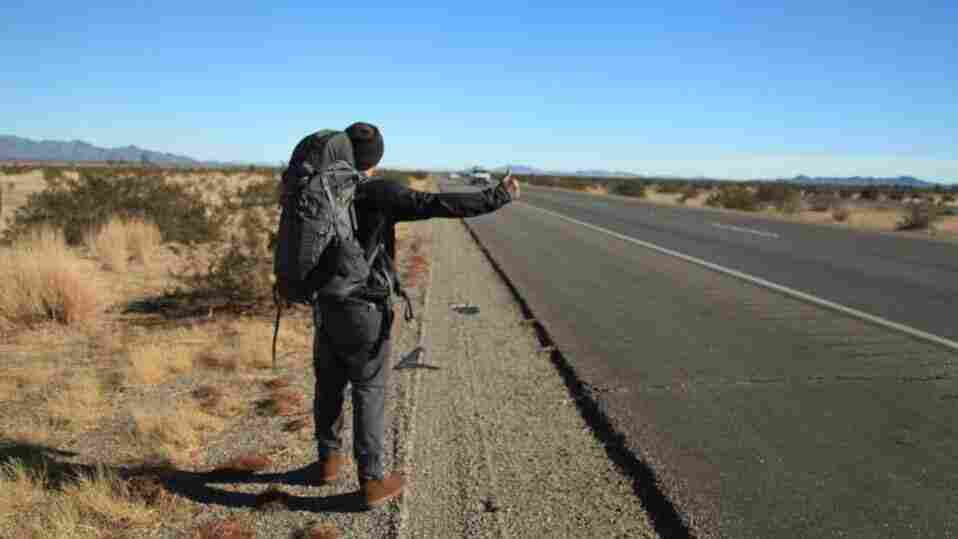 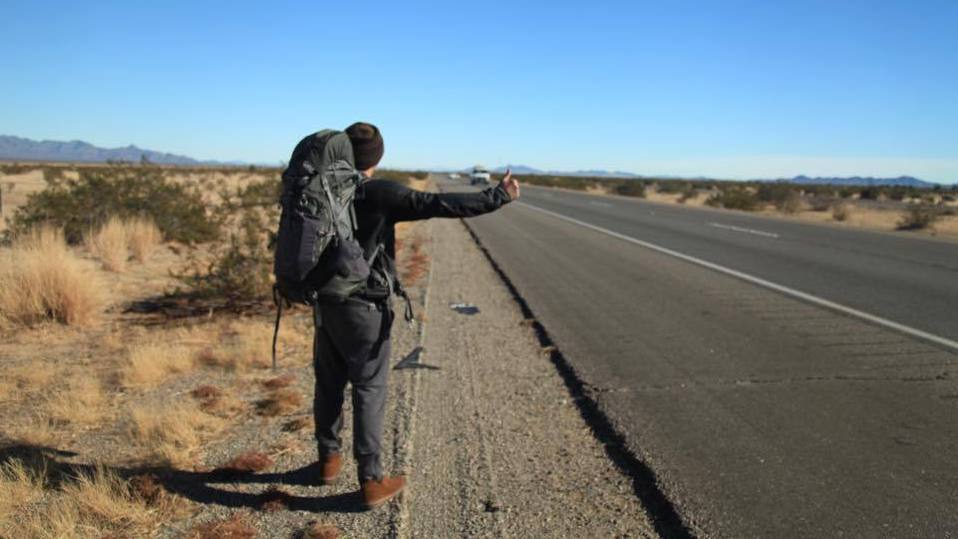 Hoang-Chau Nguyen hitchhikes all across America and uses social media to document his adventures.

In the summer of 1970, Joyce McKenny's friend asked if she wanted to hitchhike to Maine. They were on Route 1 when a handsome man driving a '57 Dodge pickup pulled over and offered them a ride.

Without giving it a second thought, 19-year-old McKenny and her friend hopped in. They drove until dark, and then the driver suggested that the two women come back to his farm for the night instead of trying to hitch another ride in the dark.

He took them down a long road covered by trees and surrounded by fields. They pulled up to an old farmhouse, and after making dinner the two women unrolled their sleeping bags on the floor of the living room.

A few farm cats tried to share McKenny's sleeping bag with her, so she got up and asked if she could sleep on the floor of her host's room. He agreed. She closed her eyes to go to sleep, then suddenly felt her sleeping bag being dragged across the floor.

'The Golden Era Of Hitchhiking'

Today, McKenny 's story could easily be the start of a horror movie, but in the '70s hitching was a common practice, going back to World War II.

During the second world war, cars were hard to come by — there wasn't enough gasoline, and people couldn't get tires and other necessities. Soldiers were also trying to get around.

"It became a very standard thing for people to help other people," explains Alan Pisarski, a transportation consultant who specializes in travel behavior, "especially if they were in uniform."

The next few decades comprise what he calls the "golden era of hitchhiking."

"Certainly, that was the peak. It was an era of good feeling, an era of people being very comfortable with each other. A 'we're all in this together' sort of thing," he says. "So what happened?"

It was an era of good feeling, an era of people being very comfortable with each other. A 'we're all in this together' sort of thing. So what happened?

Perhaps the largest factor in the demise of hitching was the rise in car ownership across the nation. Starting in 1960, the percentage of households that didn't have cars began to fall, from about 20 percent to less than 10 percent in 2010. Nearly everyone had a driver's license, and Eisenhower's Interstate Highway System in 1956 made traveling by car even more ubiquitous. Traveling at faster speeds made picking up a hitcher much more difficult than when people were slowly driving around smaller towns.

Then, along came Hollywood. It's difficult to tell if real-life hitching crimes preceded their horror movie counterparts, but starting in the 1950s and then gaining traction in the '70s and '80s, the psychopathic hitchhiker trope was born.

"It really kind of changed the social attitude toward it," Pisarski says. "We became much more conscious of fear, and felt a lot more distrust of your fellow citizen."

Hitching During The Decline

But that distrust didn't resonate in all corners of the U.S. — in some small pockets, hitchhiking didn't seem so scary.

Alethea Hannemann used to hitch rides back and forth from the beach when her family vacationed at Martha's Vineyard in the early 1990s when she was a teenager.

"You were only two degrees of separation between you and the person who picked you up, if you didn't know them in the first place," she says.

Being a female hitchhiker proved to be problematic at times, even on the small island, Hannemann said. Once, someone who picked her up offered to pay her to spend the day with him. Propositions like these are not uncommon for female hitchhikers. 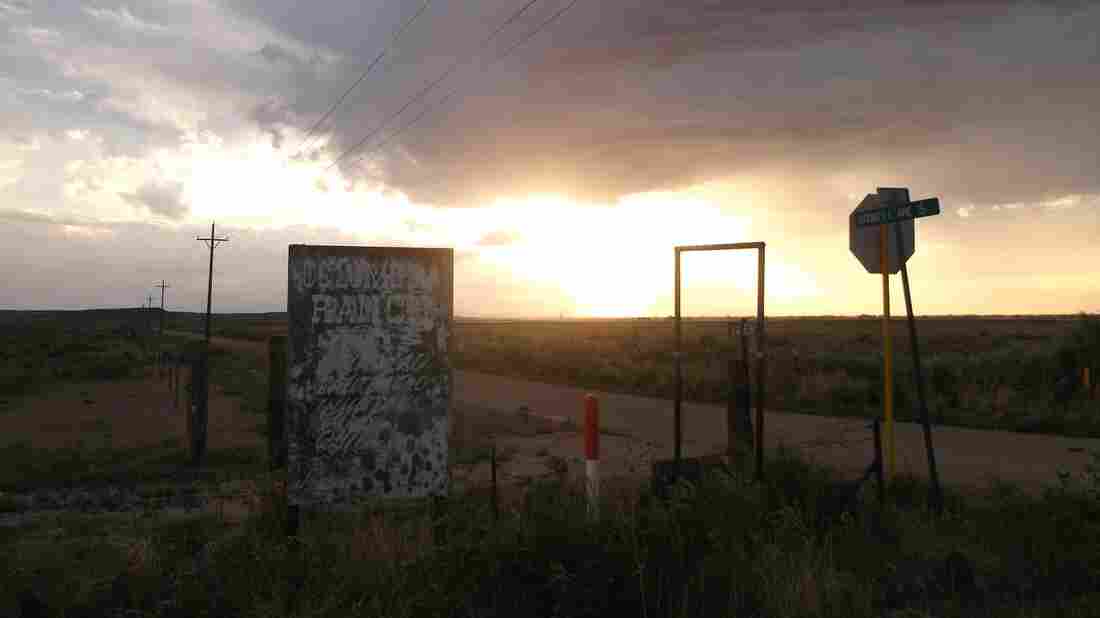 Along roads like this one in Southern Colorado, hitching a ride can take hours. Josh deLacey/Courtesy of Josh deLacey hide caption 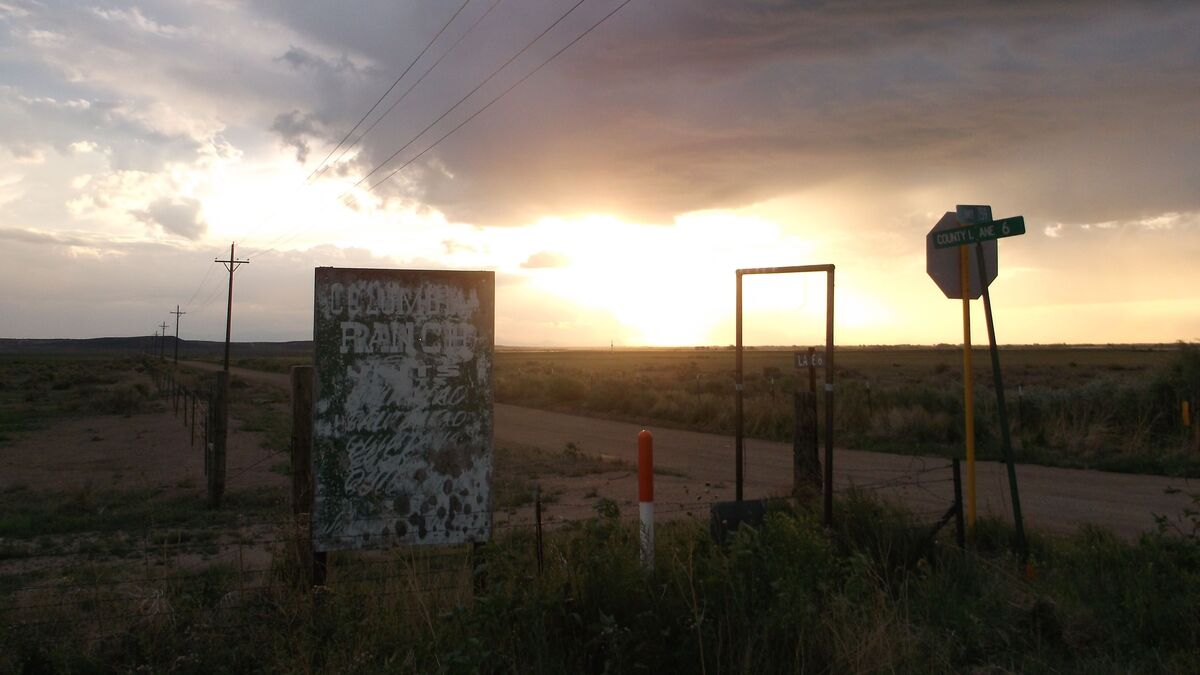 Along roads like this one in Southern Colorado, hitching a ride can take hours.

Meghan Moe Beitiks began hitchhiking in the 1990s as a "radical experiment in trust," she says. Although she was never physically harmed while hitching, there were a few experiences when she was made uncomfortable by her driver's advances. In those situations, she said, she responded firmly and politely and asked to be let out of the car. But for the most part, she had positive experiences because of being a female hitchhiker, not in spite of it.

"What I felt very keenly as a woman hitchhiking alone was that people who would pick me up told me explicitly that they don't usually pick up hitchhikers," she explains, "to protect me."

Her experience could have been vastly different, she admits. Beitiks is a Caucasian woman with a middle-class upbringing, and she says that had she been a person of color or of a different class, she might have a different story to tell.

"I'm finding that I'm not looking for that radical experience in trust anymore," she explains. She stopped hitchhiking in early 2000 and hasn't done it since. "I don't need to throw myself at the mercy of strangers."

That experiment testing the trust and kindness of strangers didn't stop when hitchhiking slumped in the 1980s and 1990s, though.

After Josh deLacy graduated from college a few years ago, he decided to hitchhike across the U.S. He didn't have a job, didn't have obligations, and didn't have anything holding him back. Like Beitiks, he saw hitchhiking as an experiment. He wanted to know if there were good people in the world. He traveled with no money, and wasn't going to ask for anything from anyone except for a ride.

He carried a hand-painted sign that read "Traveling on Trust" and made his way from his home in Washington state to Michigan to New Mexico and then back home. He got in the car with young pregnant mothers, a grandmother, a Vietnam veteran, a police officer, a pastor, a criminal, a bunch of teenagers and even a man who used to be a meth cook. He rode with 138 different drivers, and traveled 6,745 miles.

"What really impacted me was that I could trust more people than I thought I could," he says. "It's really forced me to evaluate what makes a good person."

DeLacy kept a blog during his trip that he updated anytime he could along his journey. 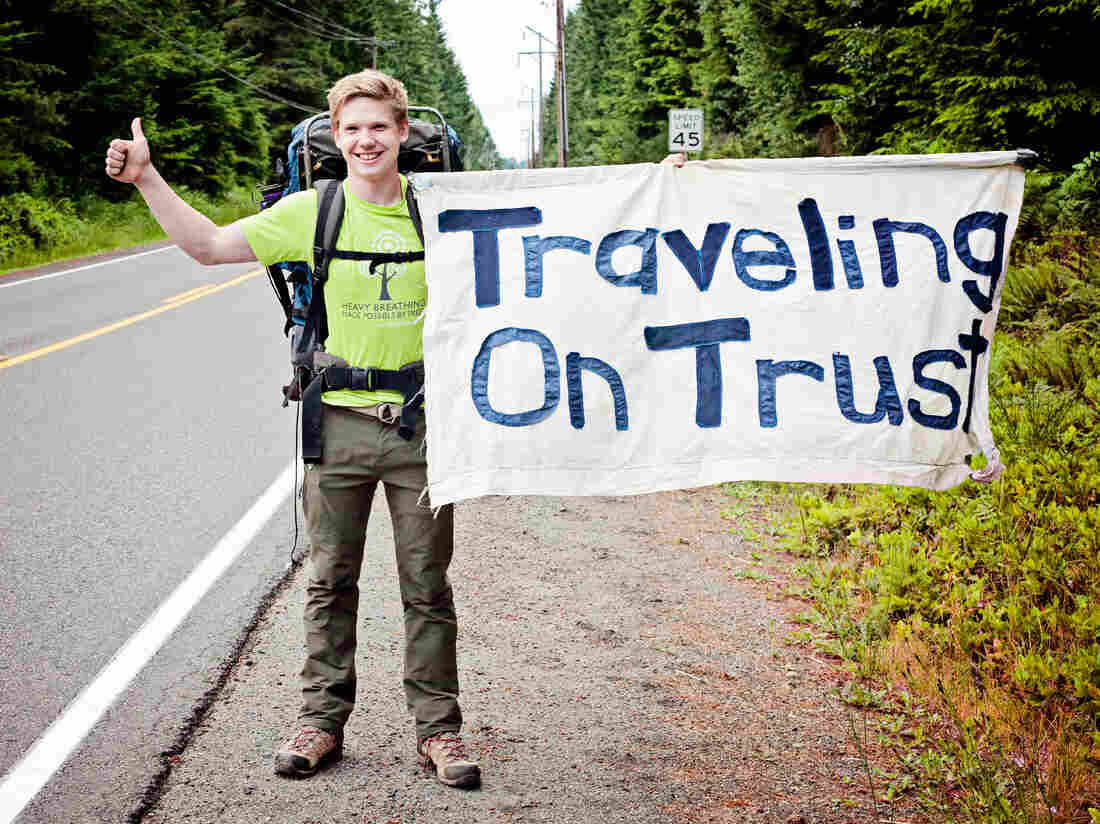 Josh deLacy poses with his sign that reads "Traveling on Trust." He hitchhiked 6,745 miles as a social experiment after he graduated from college. Calvin College hide caption 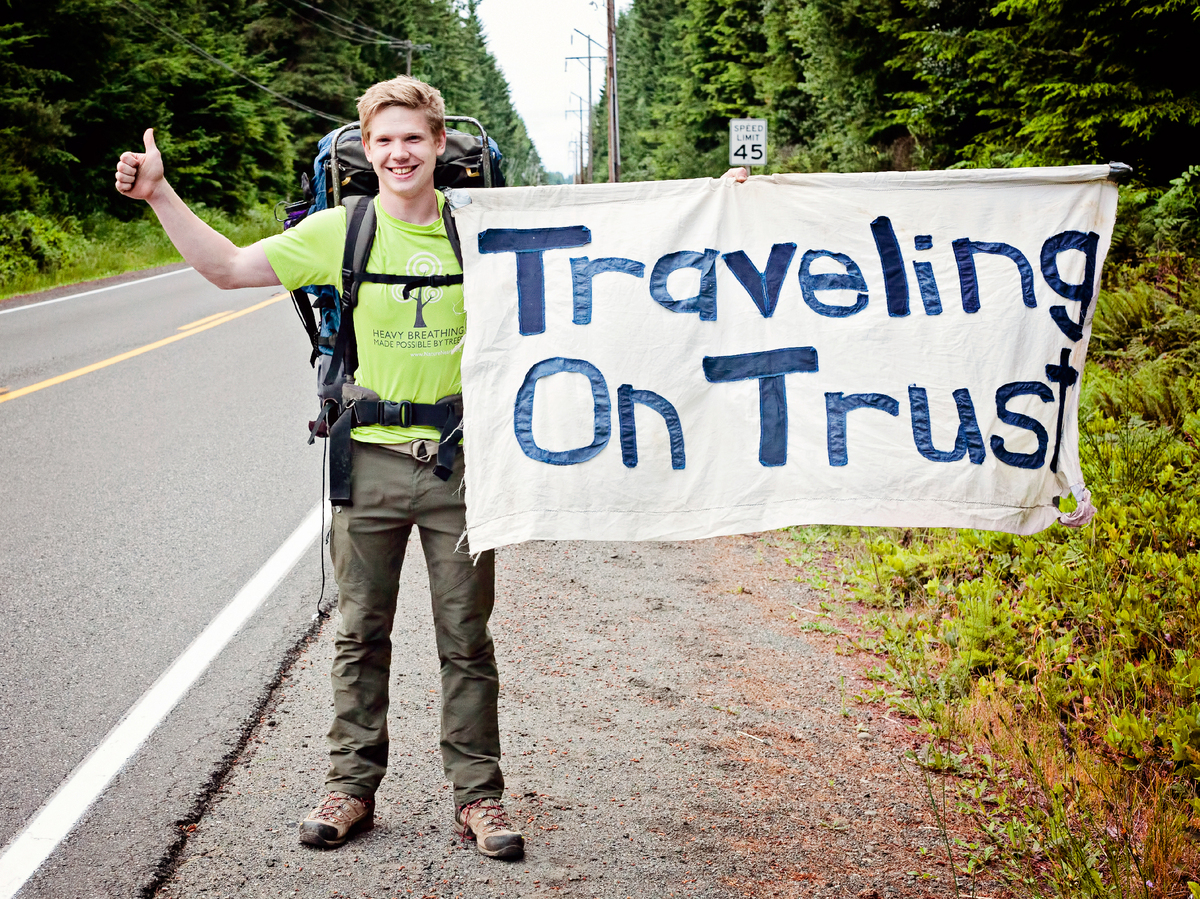 Josh deLacy poses with his sign that reads "Traveling on Trust." He hitchhiked 6,745 miles as a social experiment after he graduated from college.

Another modern day Jack Kerouac, Hoang-Chau Nguyen, also keeps an electronic record of his hitchhiking adventures. His Facebook page, Wheres Woncho, is the Humans of New York of hitchhiking — he posts photos of the various people who give him rides with captions like "I ain't no damn lot lizard, I'm just trying to get to Mobile" or "Former celebrity bodyguard told us Angelina Jolie smelled."

He uses his Facebook page to put out calls to his 1,550 followers asking for help finding places to stay or things to do in the towns that he hitches through. He uses Google maps to find grassy areas to set up a tent, Snapchat to ask for things to do and keep live updates, and Instagram for some of his photos. Sometimes he goes to Craigslist rideshare to catch a ride if hitching is slow, and couchsurfing.com to find a place to crash at the end of the night. He also checks specific state laws on hitchwiki, a website that gives tips on hitchhiking in different places around the world. 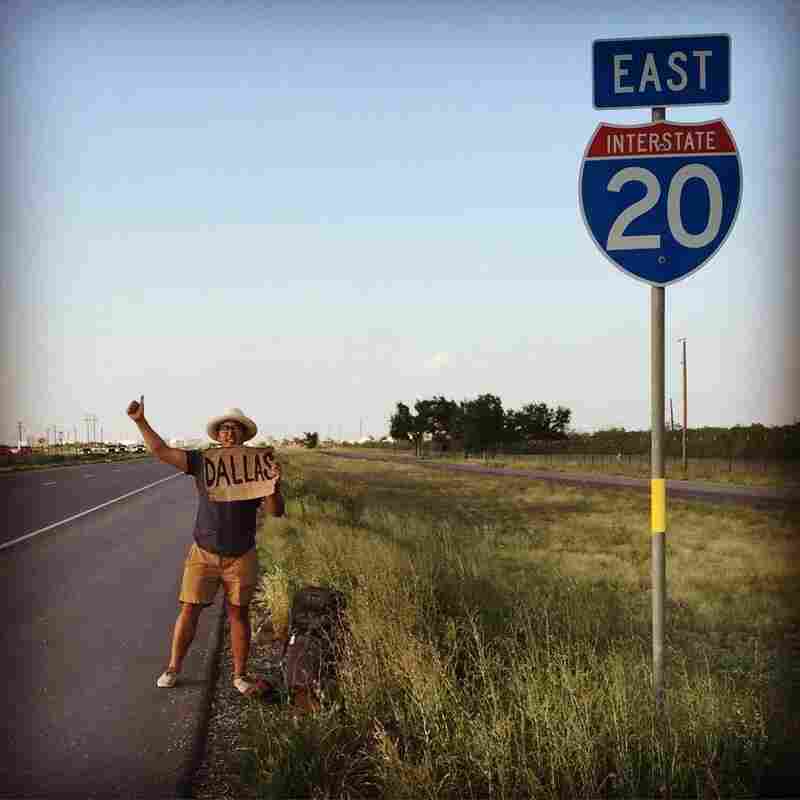 Hoang-Chau Nguyen puts his thumb out to catch a ride from Midland, Texas, to Dallas. He posted this photo on Facebook with the caption: "Hitchhiking is all about viewing your immediate problems in pragmatic and strategic terms. There aren't any other issues, only your actual resources and your awareness of all your possible choices of action." Courtesy of Hoang-Chau Nguyen hide caption 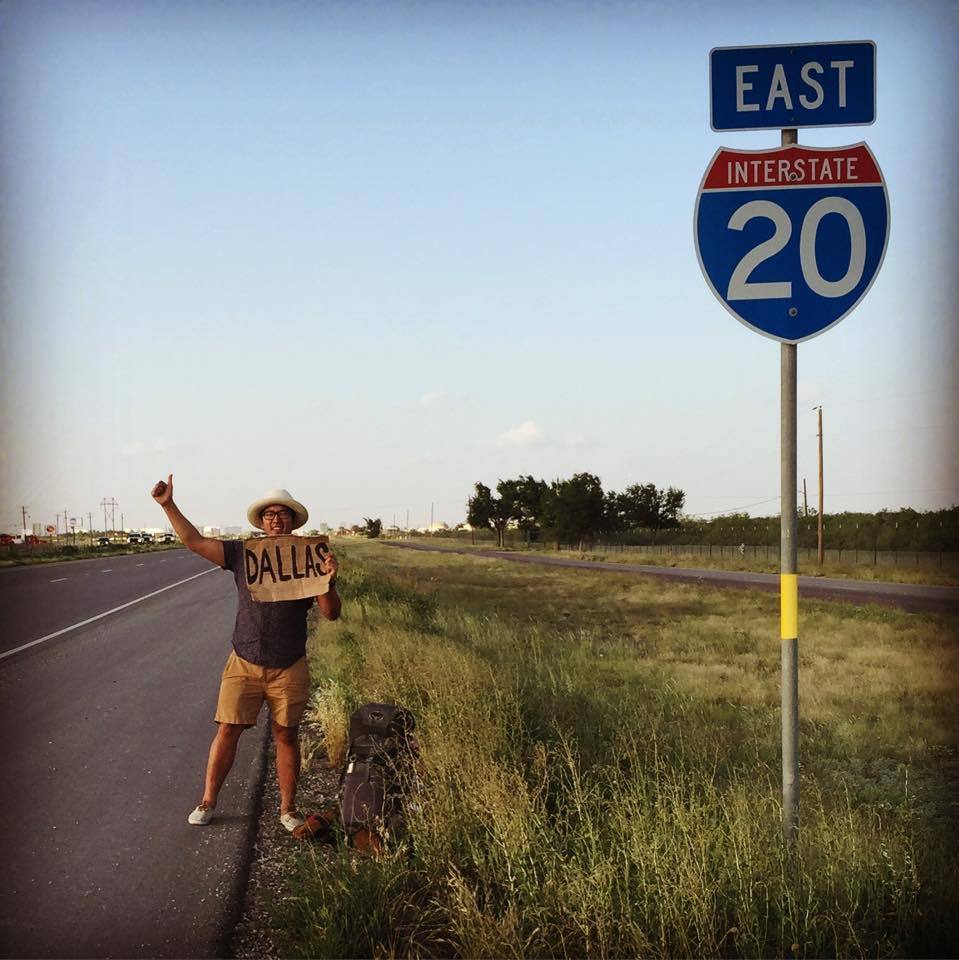 Hoang-Chau Nguyen puts his thumb out to catch a ride from Midland, Texas, to Dallas. He posted this photo on Facebook with the caption: "Hitchhiking is all about viewing your immediate problems in pragmatic and strategic terms. There aren't any other issues, only your actual resources and your awareness of all your possible choices of action."

When asked if using all of this technology still qualifies as hitchhiking, Nguyen laughs.

"Being a hitchhiker, you have to use whatever resources you have," he says. "If you're getting a ride somewhere for free, that's hitchhiking."

In a way, using technology could be the future for the lost art of hitchhiking, Alan Pisarski explains.

"Instead of sticking your thumb out, you tap your cellphone to announce where you are and where you want to go," he says.

A culture of sharing is at the roots of hitchhiking, Pisarski says. And he hopes that in the future people will look past the cultural stigmas of hitching to see that it can be OK to travel on trust.

As for 19-year-old Joyce McKenny, she was not murdered that August night in 1970 in a strange man's farmhouse.

Instead, a few years later she would marry him. And that night in the farmhouse?

"Well, I was a little promiscuous," McKenny says with a laugh. She's 64 now, or, as her husband says, she's "Sexty-four." They have three sons and a couple of grandchildren.

But McKenny admits it was a different time back then.

"I think it would be scarier these days," she says. "I've seen people hitchhiking and I don't pick them up. It's not safe, and I'm just a little old lady."

A previous version of this story incorrectly said Alethea Hannemann hitchhiked as a teenager in 1980. It was actually during the early 1990s.