Accessibility links
Is Football Worth The Brain-Injury Risk? For Some, The Answer Is No When he killed himself at 50, former NFL player Dave Duerson's brain showed serious damage, likely from hits during his football career. His son now questions the gamble of playing the game. 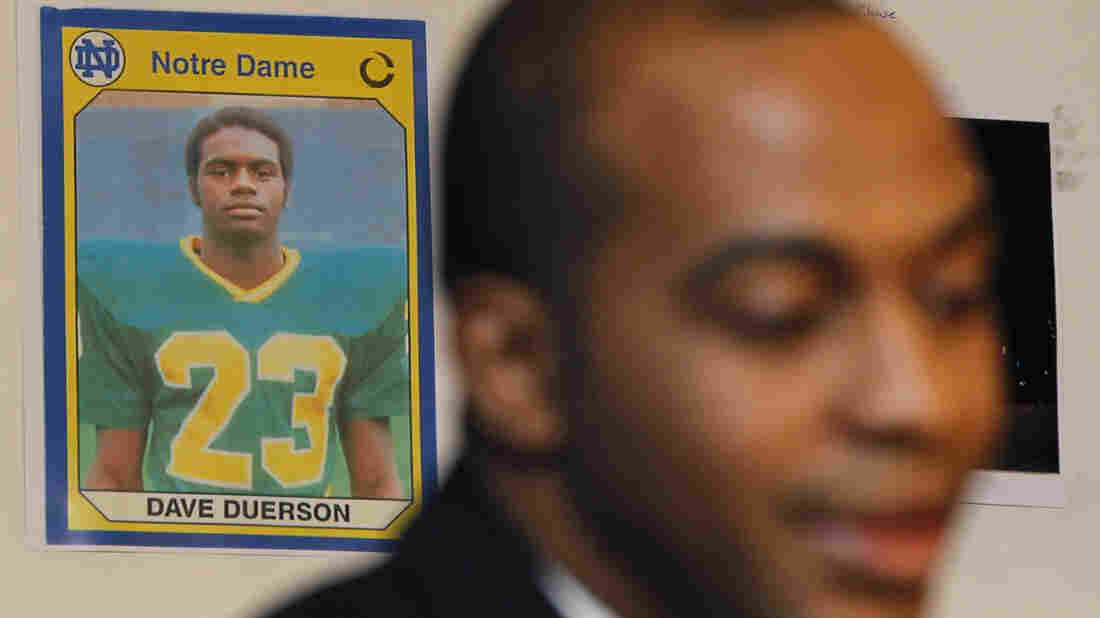 A photo of former Chicago Bears Dave Duerson, while he was playing at Notre Dame, hangs behind his son Tregg as Tregg announces a wrongful death lawsuit against the NFL in 2012. Charles Rex Arbogast/AP hide caption 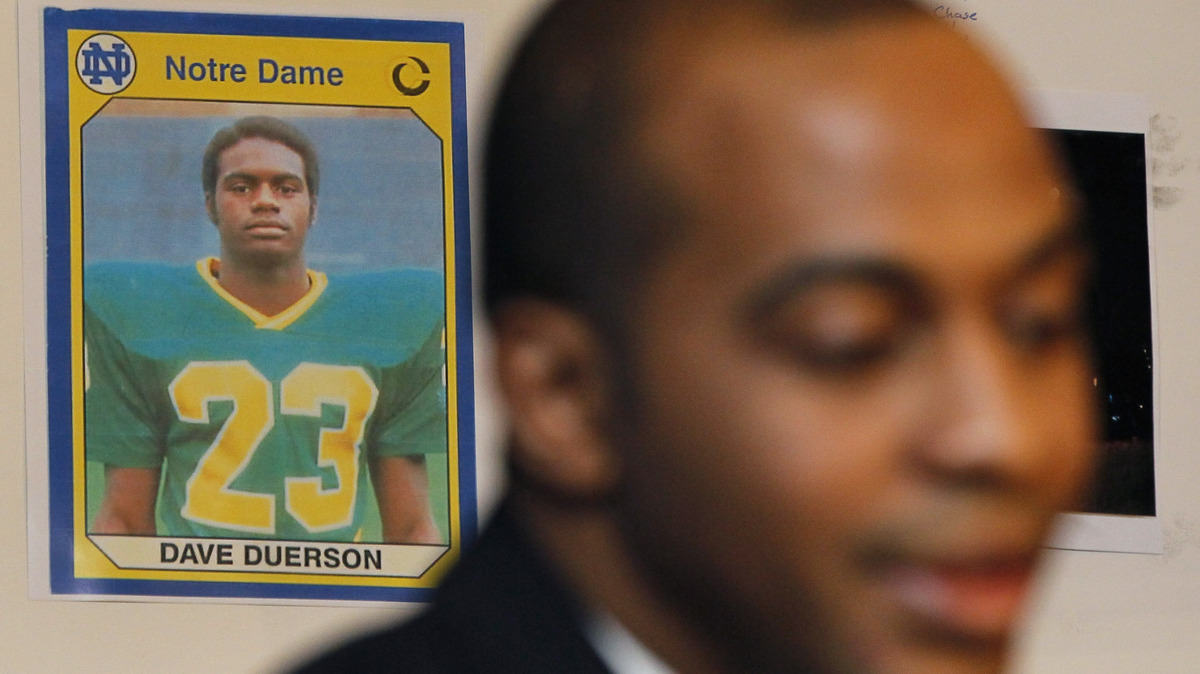 A photo of former Chicago Bears Dave Duerson, while he was playing at Notre Dame, hangs behind his son Tregg as Tregg announces a wrongful death lawsuit against the NFL in 2012.

The National Football League held its annual hall of fame induction ceremony Saturday night, in Canton, Ohio. Eight players were given football's highest honor, including a posthumous induction for Junior Seau, the former linebacker for the San Diego Chargers who killed himself in 2012.

After his death, Seau's brain showed signs of chronic damage — the same kind of damage that has been found in dozens of other former NFL players.

Some players are rethinking their careers — like up-and-coming linebacker Chris Borland, who quit after his first season with the 49ers a few months ago — for fear of head injuries.

Parents are weighing the risks as well. So when someone like Chicago Bears coach Mike Ditka talks, they listen. When host Bryant Gumbel asked Ditka on HBO's Real Sports earlier this year whether, if he had an 8-year-old now, he would want him to play football.

"No," he answered. "That's sad. I wouldn't, and my whole life was football. I think the risk is worse than the reward."

This week on For the Record: Football's reckoning. Click the audio link on this page to listen to the full interviews.

Tregg Duerson's father, Dave Duerson, a defensive back who played most of his pro football career with the Chicago Bears, killed himself in 2011 in his Miami home. Duerson was part of the legendary '85 team that won the Super Bowl, and five years later helped the New York Giants win their own championship. 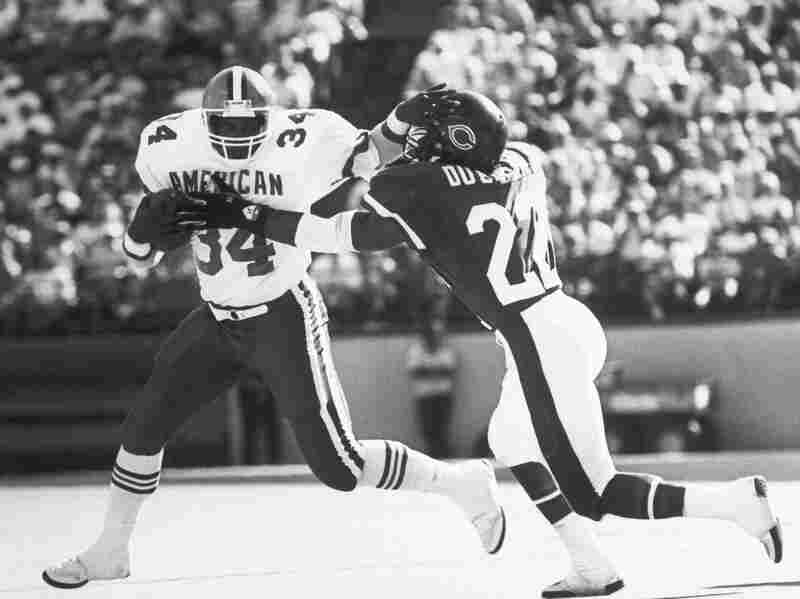 Kevin Mack of the Cleveland Browns tries to get away from the grasping hands of Dave Duerson of the Chicago Bears during Pro Bowl in Honolulu, 1988. AP hide caption 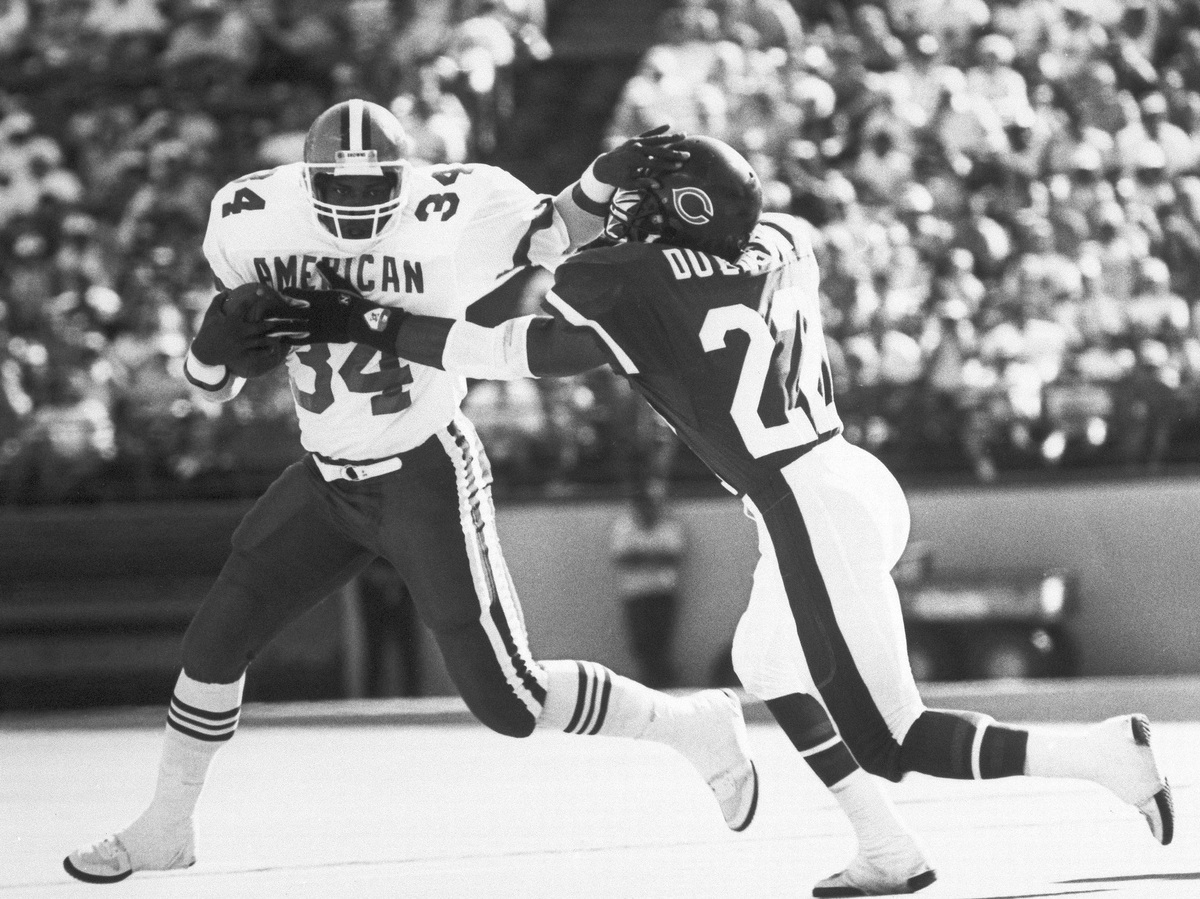 Kevin Mack of the Cleveland Browns tries to get away from the grasping hands of Dave Duerson of the Chicago Bears during Pro Bowl in Honolulu, 1988.

He retired from the NFL after the 1993 season and started working in business. He had some successes, some failures, but nothing that his family thought would drive him to kill himself.

In the suicide note, Tregg Duerson says, his father detailed a devastating decline.

"He said at one point that he is thinking about other NFL players that have similar issues," he says.

Duerson shot himself in the chest and requested in the letter that his family donate his brain to science to help others understand the connection between concussions and traumatic brain injuries.

Tregg Duerson sued the NFL in 2012, alleging that the league's handling of Duerson's on-field concussions led to his brain damage and ultimate suicide. 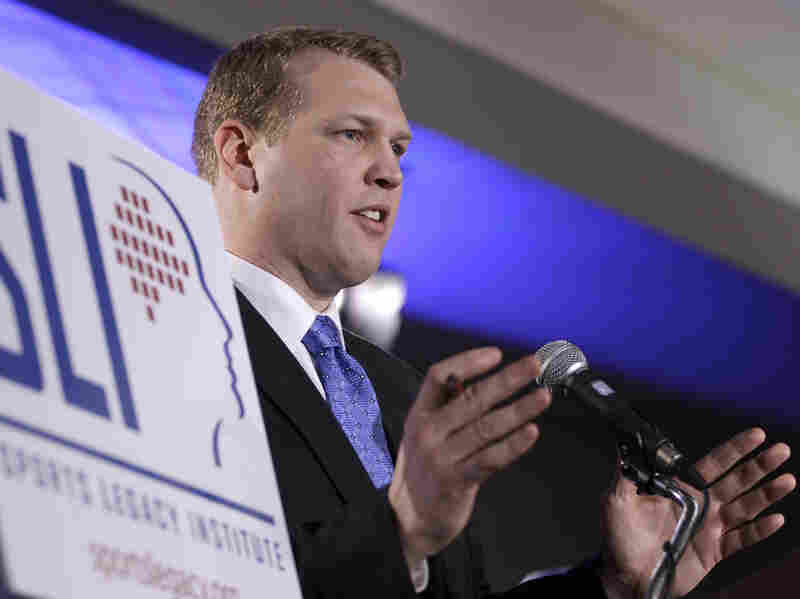 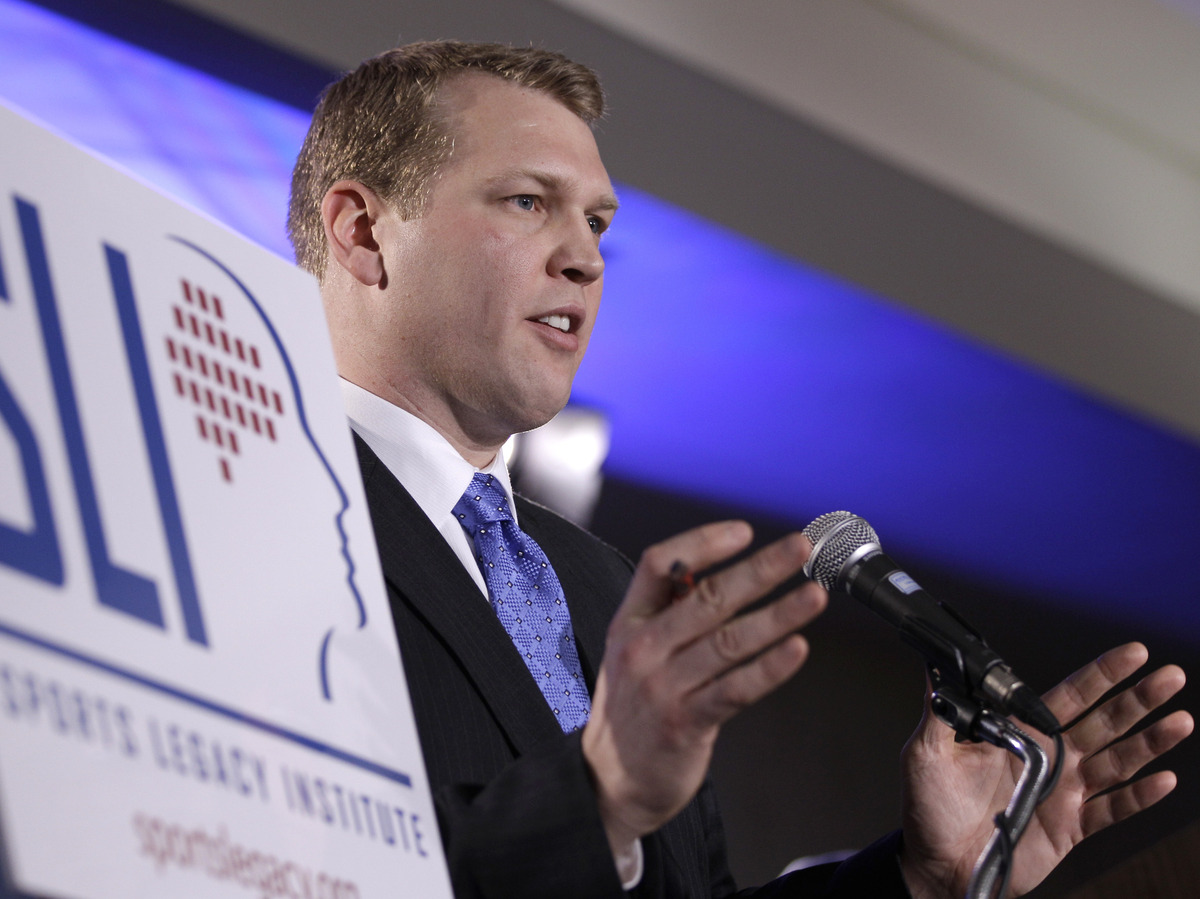 Chris Nowinski was a defensive tackle for Harvard University and later spent time as a professional wrestler. He was forced to retire after suffering a serious concussion in 2003.

Nowinski is now head of the Sports Legacy Institute, an advocacy group focused on what they call the concussion crisis. Duerson's brain showed advanced CTE, Nowinski says. He was in the third of four stages, the fourth being the most severe and almost always associated with dementia.

"Dave had damage on his frontal lobe, throughout his medial temporal lobe, which controls things like memory and emotional control," Nowinski says.

The BU team has studied 79 brains of former football players, and found 76 showed signs of CTE. They still don't know the precise cause.

"We're still kind of guessing," Nowinski says. "We don't know what is actually triggering the beginning of it. Is it one hard hit? Is it one hard hit followed by a bunch of small hits? Is it two concussions close together? Because not everybody gets this."

But he is sure about the connection between the number of hits a player takes over a career and the incidence of CTE. The longer someone plays football, he says, the higher the chances of getting multiple concussions that could lead to CTE.

He believes kids should not be allowed to play football until high school.

"To think that we would hit kids in the head a few hundred times each fall, under some concept that we're teaching them lessons, through this sport, that are better than any other way we could teach them, is insane to me," he says. 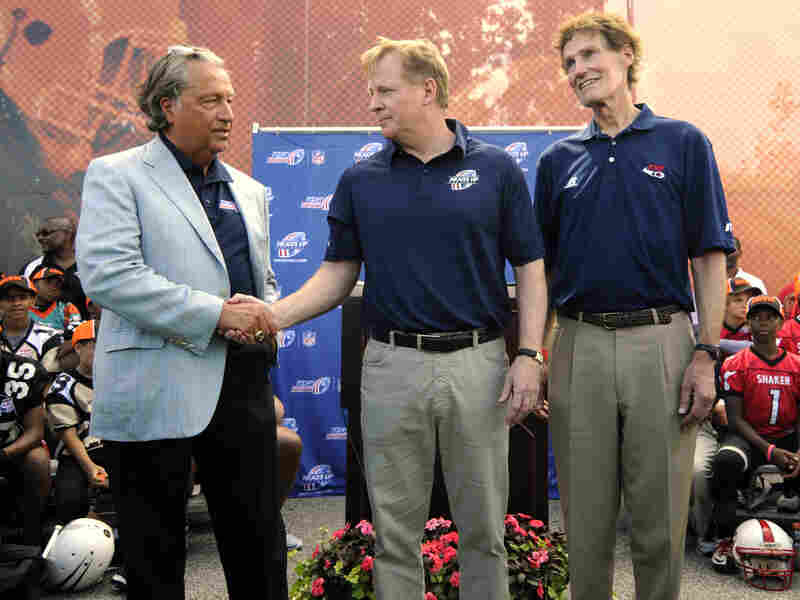 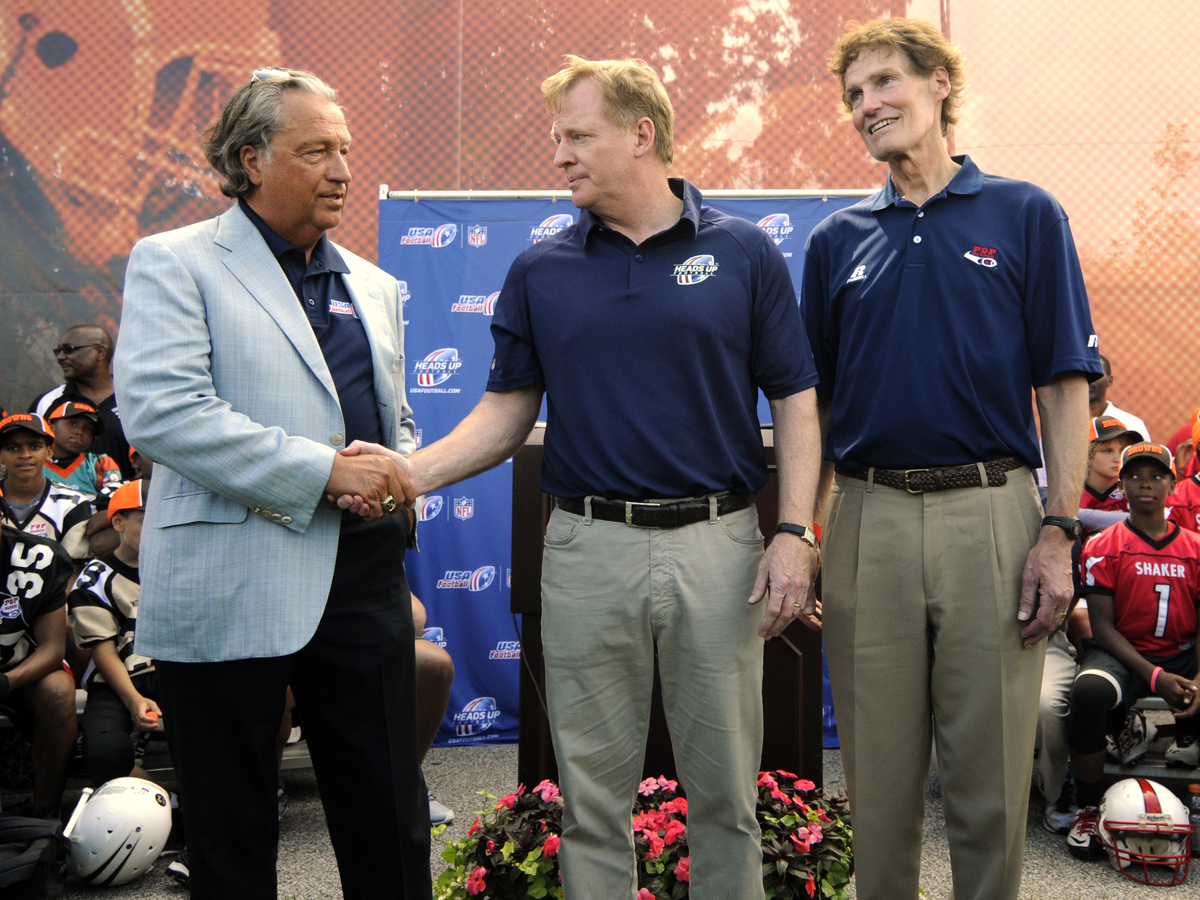 Pop Warner runs football programs around the country for children as young 5.

"Relative to other youth sports, we are remarkably safe," Butler says.

The Pop Warner leadership is keenly aware that concussions are a real risk, but Butler insists that the risk is no higher in football than any other typical childhood mishap.

"If you take a typically active boy or girl, 8, 10, 12 years old, and they want to play football, and you say, 'You can't play football,' it's not like they're going to sit on a couch wrapped up in bubble wrap," he says. "They're going to be active. They're going to go out and fall off a roof or bicycle into a concrete bridge abutment by accident or something. So, yes, concussions have certainly always been around, always been part of not only football, but all kids activities and all sports."

The league has changed its policies to try to reduce the risk of concussions in its young players. In 2012, Pop Warner introduced rules limiting the kind of contact allowed in practice. They prohibit full-speed, head-on tackling and blocking and intentional head-to-head contact.

The rules also limited the amount of contact during practice to one-third of practice time.

Nowinski says those changes are an improvement, but that the culture of the game has to change in order to diagnose concussions when they happen.

"We're not teaching kids or encouraging them to report when they do get symptoms," he says. "We have this kind of culture of silence around the injuries, so coaches really need to be specific with their players that they want them to report."

It's an instinct he shared with his father, along with a love of the game. Duerson has a job in finance, a also works for a mental health advocacy group. But his father's suicide has left a big void in his life.

"I still love the game," he says. "I think it's just people going in with complete eyes open, that there is risk out here and that no matter what we do, the risk is still going to be there. So for me, I still like the game but would I want my child to play in the future? No."

In the audio of this story, as in a previous Web version, we incorrectly say Junior Seau died by suicide in 2011. In fact, he died in 2012.