Accessibility links
Remembering The Horror Of Nagasaki 70 Years Later Today, exactly 70 years after the U.S. dropped an atomic bomb on Nagasaki, the people of that Japanese city remember the tens of thousands killed and the legacy of their trauma. 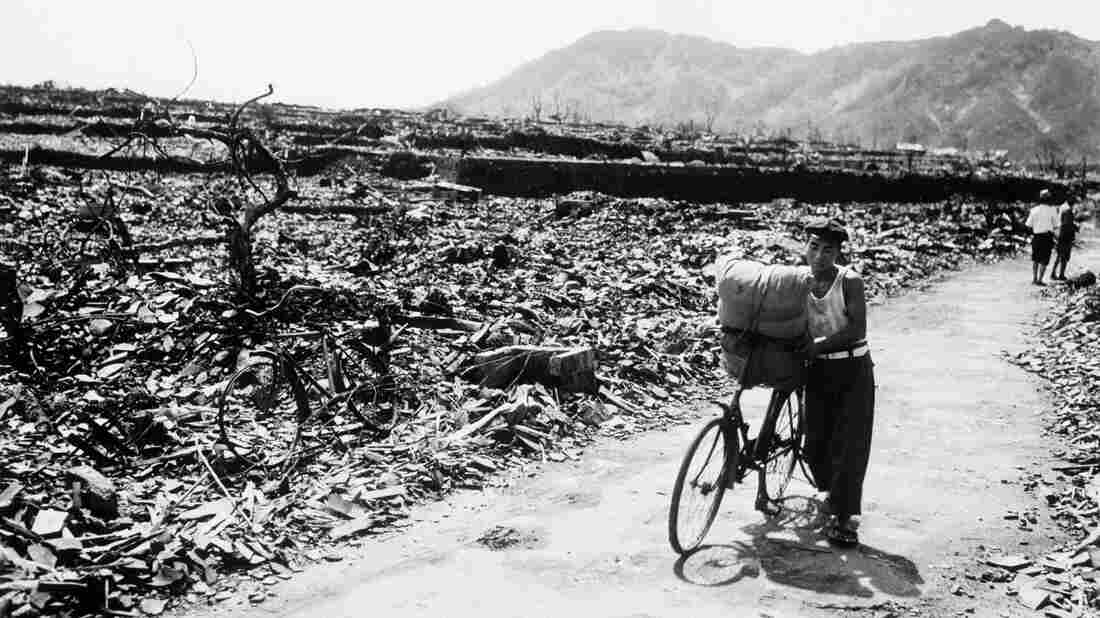 A man pushes a loaded bicycle down a cleared path in a flattened area of Nagasaki more than a month after the nuclear attack in 1945. Stanley Troutman/AP hide caption 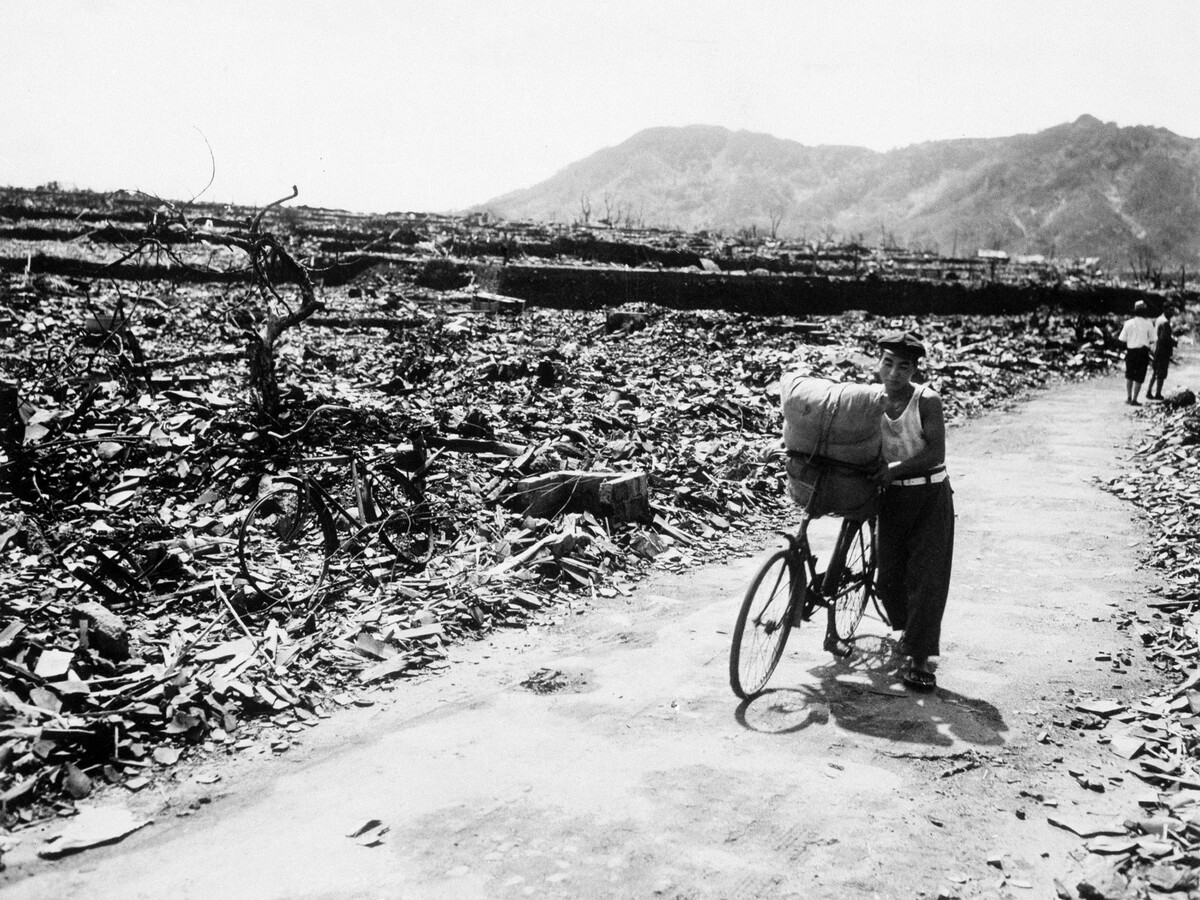 A man pushes a loaded bicycle down a cleared path in a flattened area of Nagasaki more than a month after the nuclear attack in 1945.

As Japan marks the 70th anniversary of the U.S. atomic bombing of Nagasaki that ended World War II, aging A-bomb survivors are leading the opposition to what they fear is a dangerous return by Japan's government to the militarism that started the war in Asia. 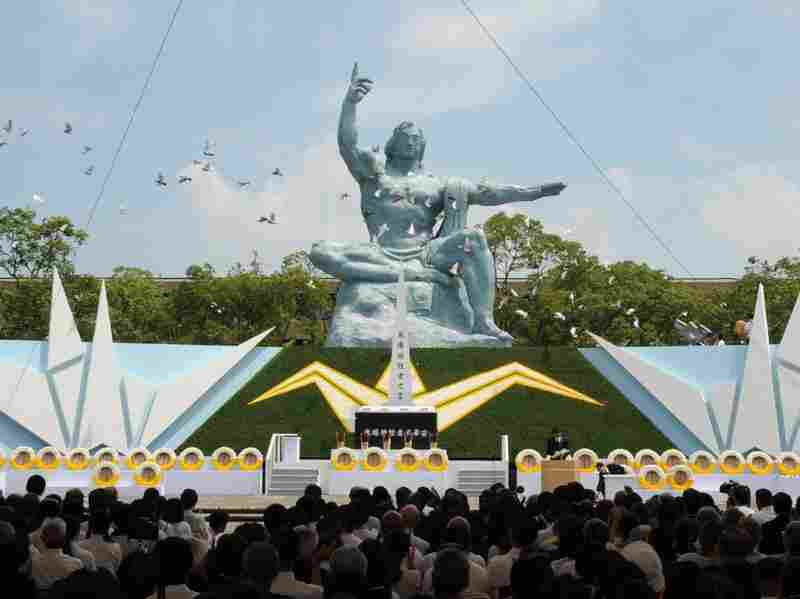 Doves fly over the Peace Statue during a memorial ceremony to mark the 70th anniversary of the atomic bombing of Nagasaki on Sunday. Jiji Press/AFP/Getty Images hide caption 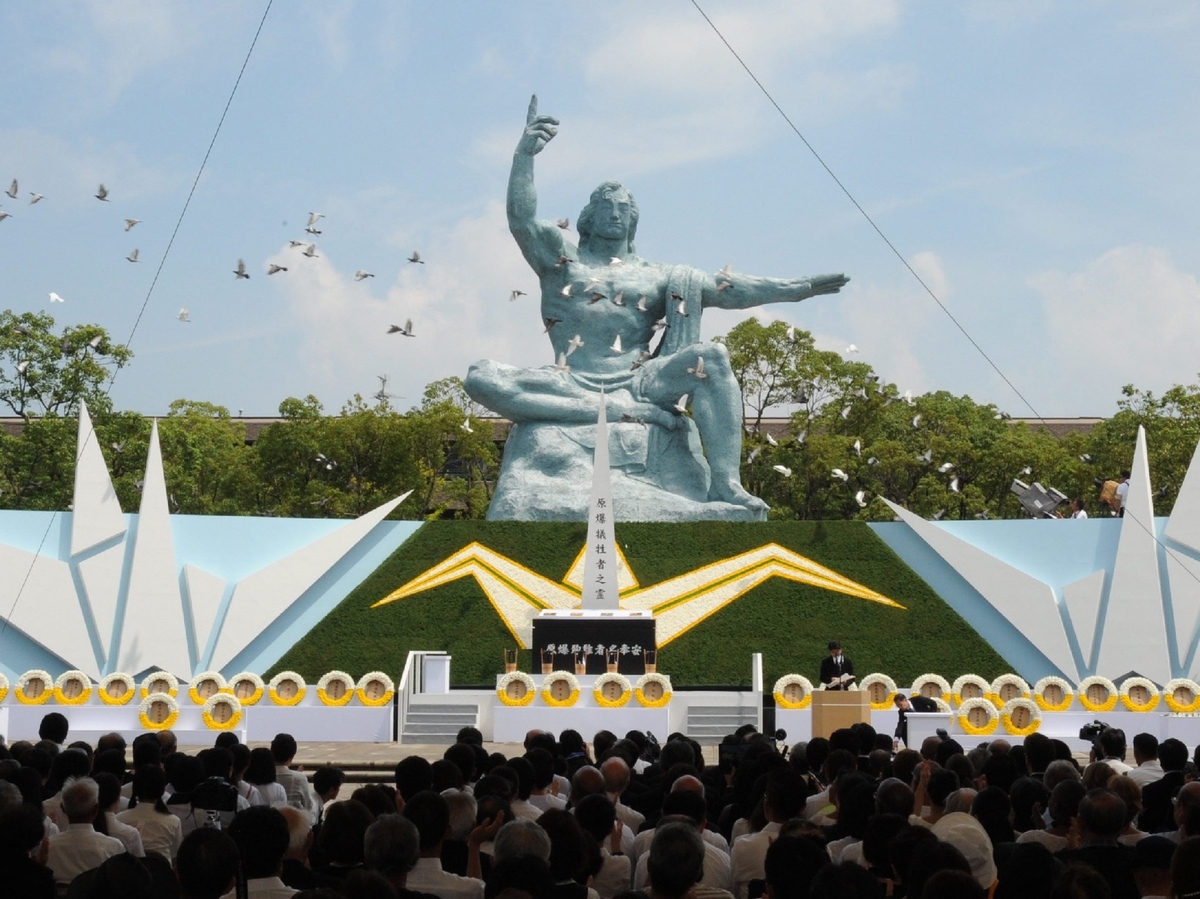 Doves fly over the Peace Statue during a memorial ceremony to mark the 70th anniversary of the atomic bombing of Nagasaki on Sunday.

Near ground zero, a bell tolled at 11:02 a.m., marking the moment that a US plutonium bomb obliterated this city and killed some 70,000 people.

With Prime Minister Shinzo Abe sitting in the audience, Nagasaki Mayor Tomihisa Taue addressed a memorial service. He said Japan should not abandon its pacifist constitution.

"There is widespread unease and concern that the oath which was engraved on our hearts 70 years ago, and the peaceful ideology of the constitution of Japan is now wavering," he said.

"I urge the government and the parliament to listen to these voices of unease and concern, concentrate their wisdom and conduct careful and sincere deliberations."

Japan's post-war constitution was drafted by the U.S. It bans the country from waging war or even having a standing military; Japan instead has "Self-Defense Forces."

But Sumiteru Taniguichi, a hibakusha representative, offered a harsh assessment of Abe's security bill at the ceremony.

"There is now an attempt to return to the wartime era by forcing through approval of the right to collective self-defense and an amendment to the constitution," he told the attendees. "This security bill the government is pursuing will lead to war. We cannot accept this."

Taniguchi was a young postman who suffered horrific burns in the bombing. He was photographed by a U.S. Marine while he lay in a hospital, recovering.

On August 6th, seven groups of hibakusha called on Abe to scrap his security bill during commemoration in Hiroshima, which was also destroyed by a U.S. atomic bomb three days before Nagasaki in 1945. 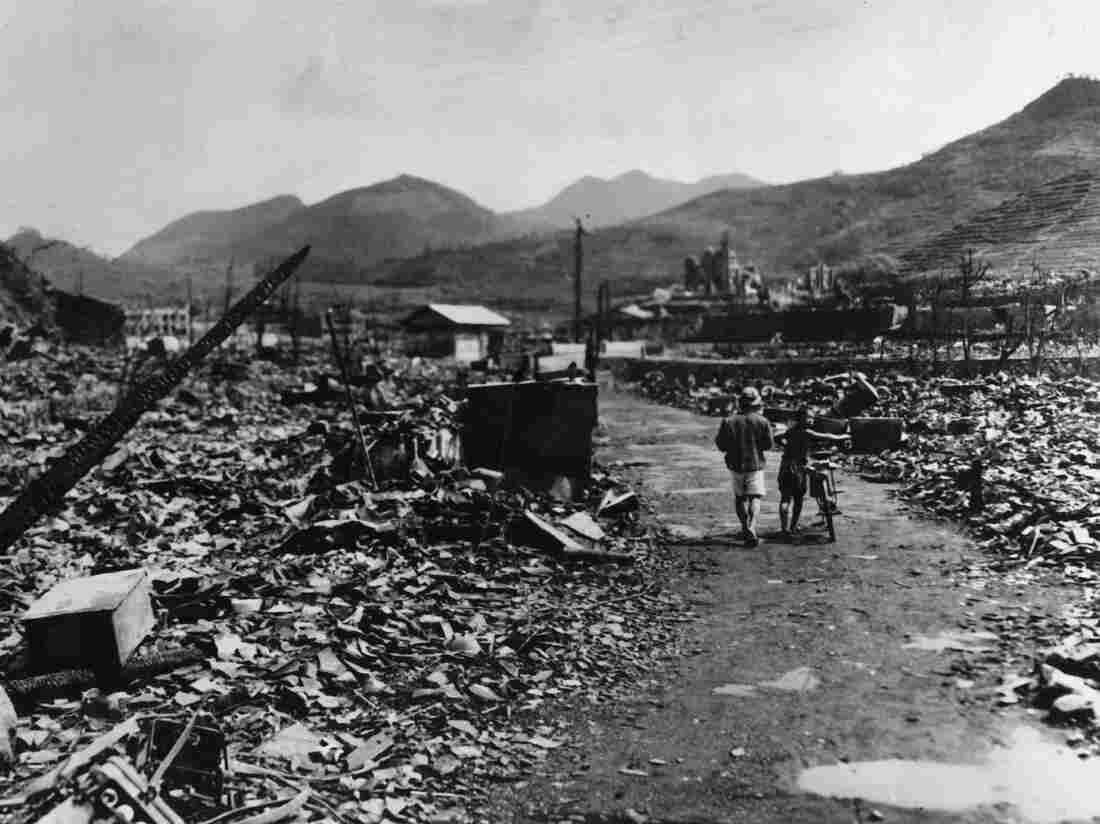 The ruins of Nagasaki after the dropping of the atomic bomb. Hulton Archive/Getty Images hide caption 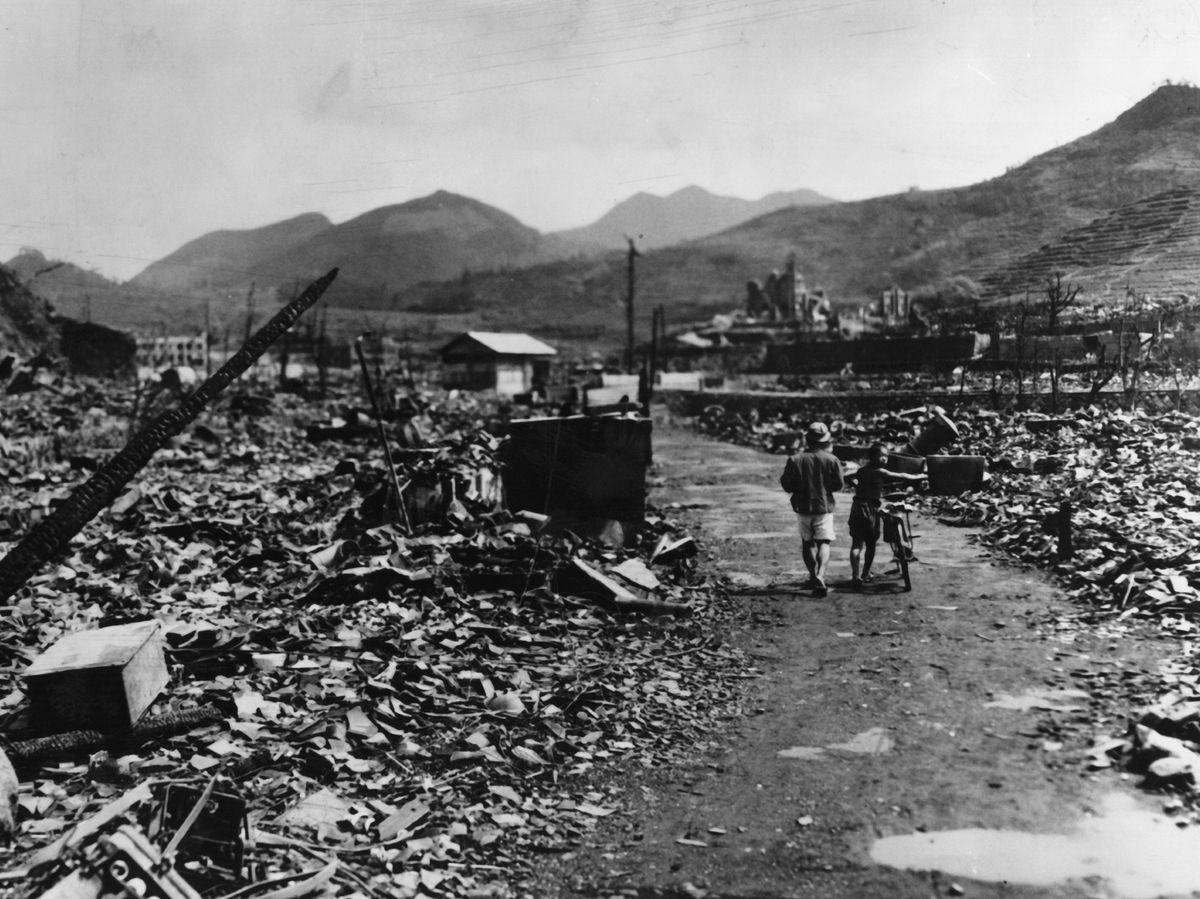 The ruins of Nagasaki after the dropping of the atomic bomb.

The average age of hibakusha is now over 80 years old. Hundreds of them suffer and die every year from radiation-related illnesses. Many of them suffered discrimination, as people feared that their radiation sickness was contagious.

Under post-war American military occupation, the suffering of the hibakusha was kept in the dark by strict censorship and misinformation. Death from radiation sickness is "a very pleasant way to die," Manhattan Project director General Leslie Groves testified before the Senate in 1945.

In 1945, Minori Moriuchi was an 8-year-old student in Nagasaki and lived in a village about 3 miles east of ground zero. He remembers that the weather 70 years ago was similar to recent days, with a hot blazing sun in a cloudless sky. He recalls catching crickets in some fruit trees with his friends. 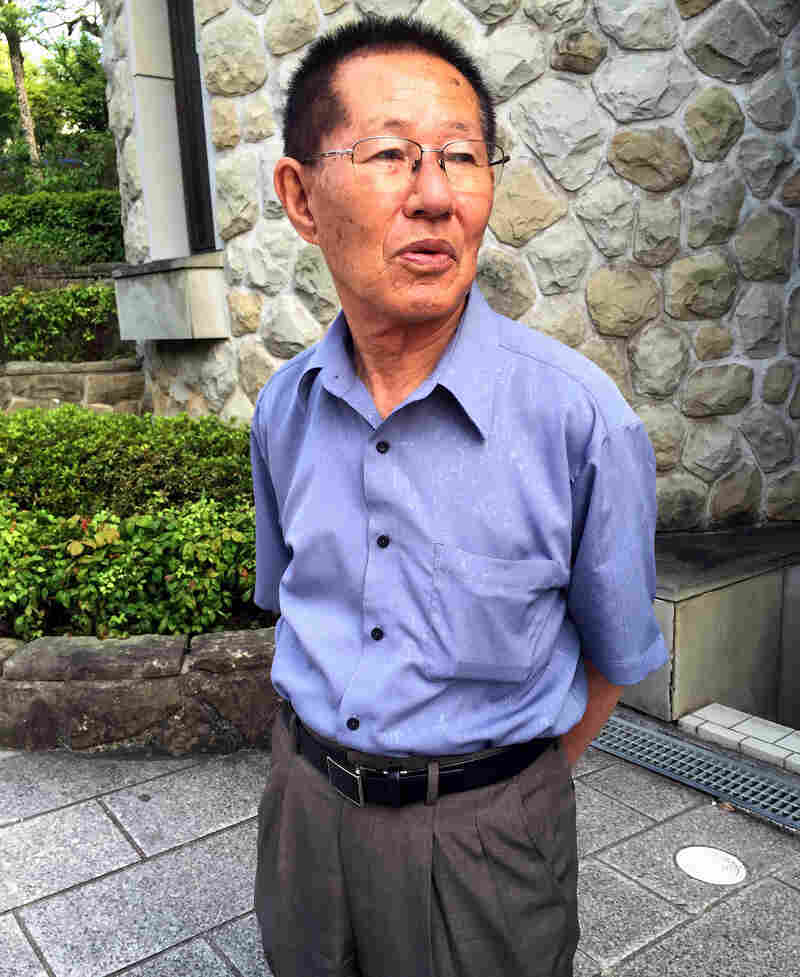 Minori Moriuchi was an 8-year-old student in Nagasaki when the U.S. dropped an atomic bomb on the city. He believes he contracted radiation sickness when going into the city to look for relatives. Anthony Kuhn/NPR hide caption 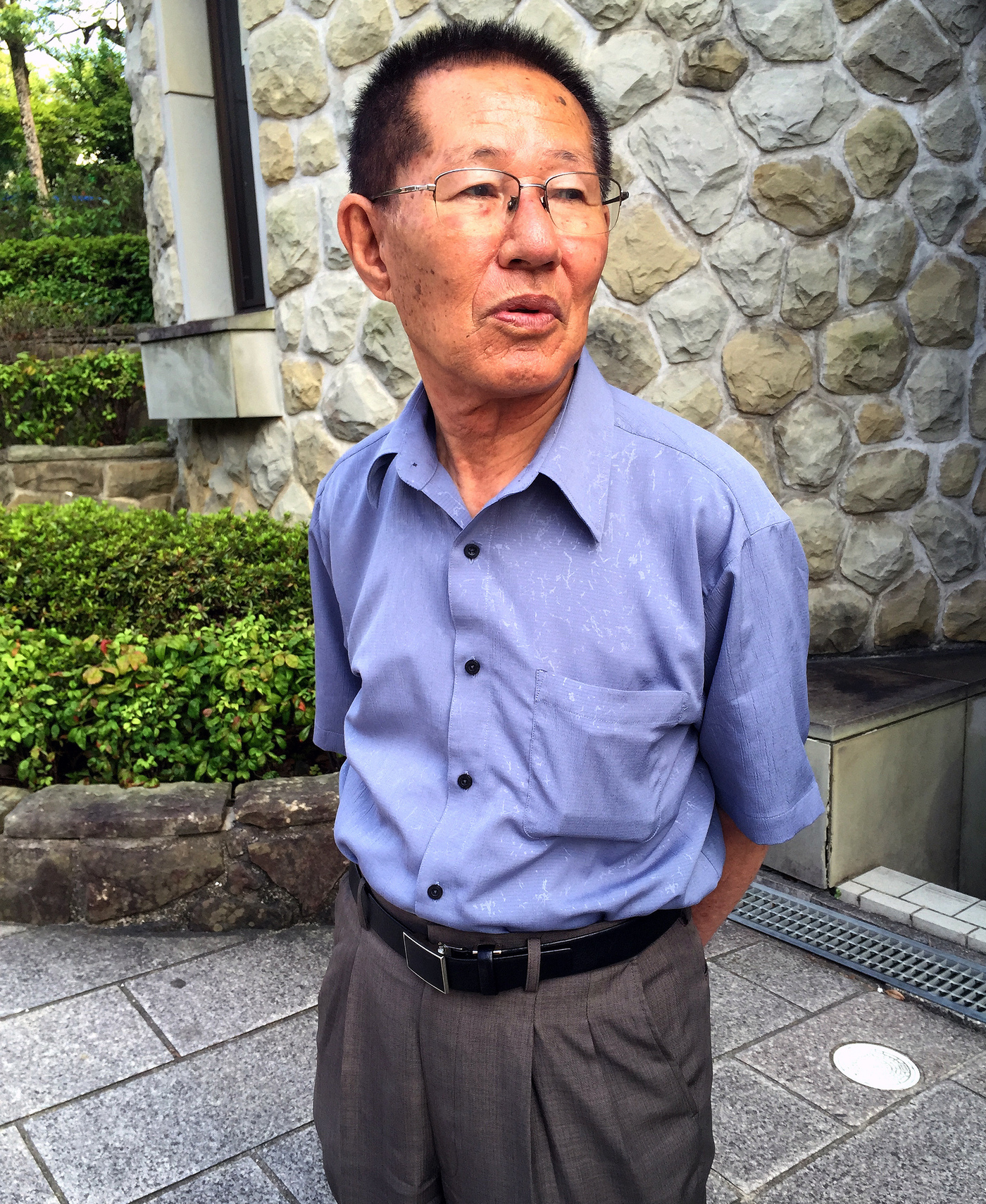 Minori Moriuchi was an 8-year-old student in Nagasaki when the U.S. dropped an atomic bomb on the city. He believes he contracted radiation sickness when going into the city to look for relatives.

"I climbed the tree and was reaching up towards the sky for a cricket. In that instant, a laser-like light hit my eyes," he says. "I was blinded and I thought the sun had exploded."

Moriuchi jumped from the tree and hugged the ground as a huge shockwave blasted over him, covering him with debris. His life was saved by a little hill that lay in between his home and the city center.

He remembers that, a few hours later, his aunt appeared silently at his house with two cousins. She led a 5-year-old by the hand, and carried a 3-year-old, who was already dead. His aunt told Moriuchi that his younger cousin had died after begging for water.

"They were burned red and black," he told me. "I could not distinguish their faces from their heads, or their clothes from their skin.

"When I tell my story, this scene always comes back to me," he says. "I always regret that I couldn't do anything for this kid who died without a drink of water. It was all he wanted."

Moriuchi says he watched as six family members died in his home. The last one to die, another cousin, expired after violently vomiting.

"The smell was so awful, it was like nothing else. I can't ever forget it," he says. "He wasn't eating anything, so I can only assume his internal organs rotted inside him and came out."

Later, Moriuchi walked into the city to look for other missing relatives. He remembers seeing fires everywhere, corpses floating in the river, and a streetcar full of charred bodies.

But he says he was too numb and weak with hunger to react.

"I didn't feel pity for them," he recalls. "I didn't feel they stank, or that they were scary. It was like a dream, or as if I was just looking at a drawing."

Moriuchi later got radiation sickness, but he survived. He did not consider himself a hibakusha or atomic bomb victim until he got stomach cancer in his mid-50s.

Moriuchi says he regrets not taking a stand on these issues at a younger age, so he has tried to make up for lost time. He has successfully sued the Japanese government for support, educated young people about his ordeal and he has actively campaigned against nuclear weapons.

Moriuchi says he cannot forgive the U.S. for dropping the bomb on his city that ended the war. But even more, he blames Japan's military for starting it in the first place. He calls Prime Minister Shinzo Abe Japan's "worst ever," and accuses him of not learning the war's lessons.

"I wonder how he can imagine sending our beloved children and grandchildren to the battlefield," he muses. "He is interpreting our pacifist constitution in a bizarre way, so that we may be able to wage war. It is deplorable."

Japanese citizens and their Asian neighbors will be watching Abe's attitude closely when he delivers a speech marking the 70th anniversary of Japan's WWII surrender. That anniversary falls on August 15.