Accessibility links
New Orleans' Overall Crime Rate Has Fallen. Why Are People So Frustrated? Despite other gains, New Orleans' murder rate, which hit a 40-year low last year, is on the rise again and remains nearly quadruple that of other cities its size. Residents say police need to do more. 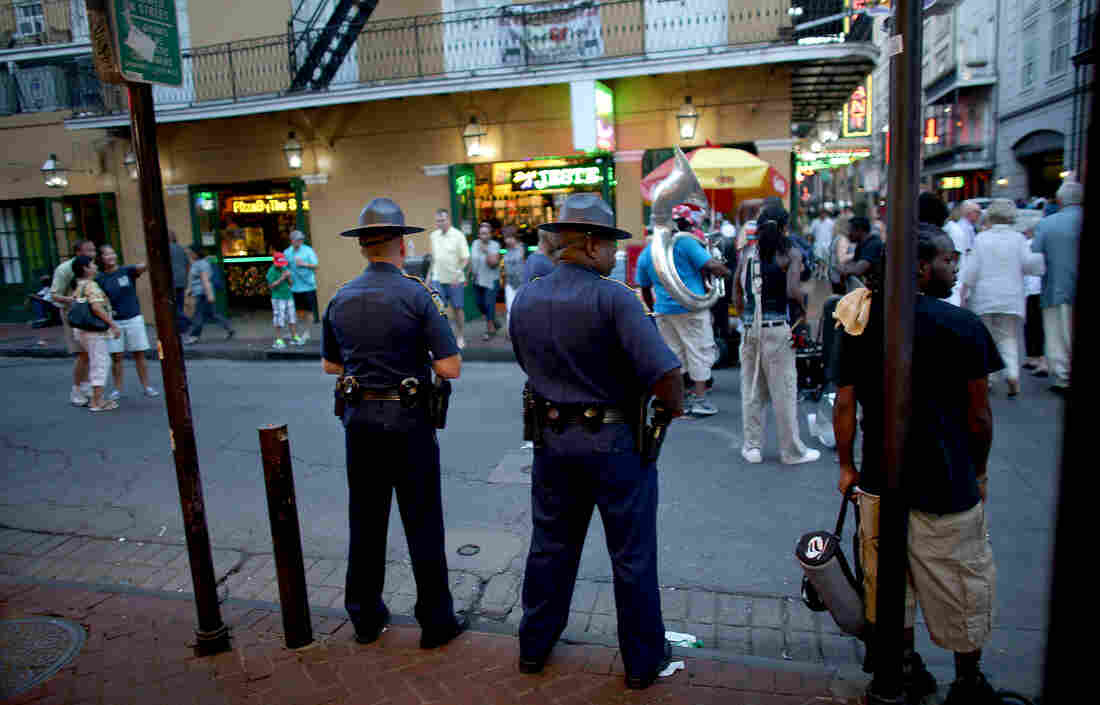 Officers with the Louisiana State Police patrol in New Orleans' French Quarter. Ordinary residents feel their neighborhoods need more protection, and they are frustrated by stepped-up efforts in key tourist areas such as the French Quarter. David Gilkey/NPR hide caption 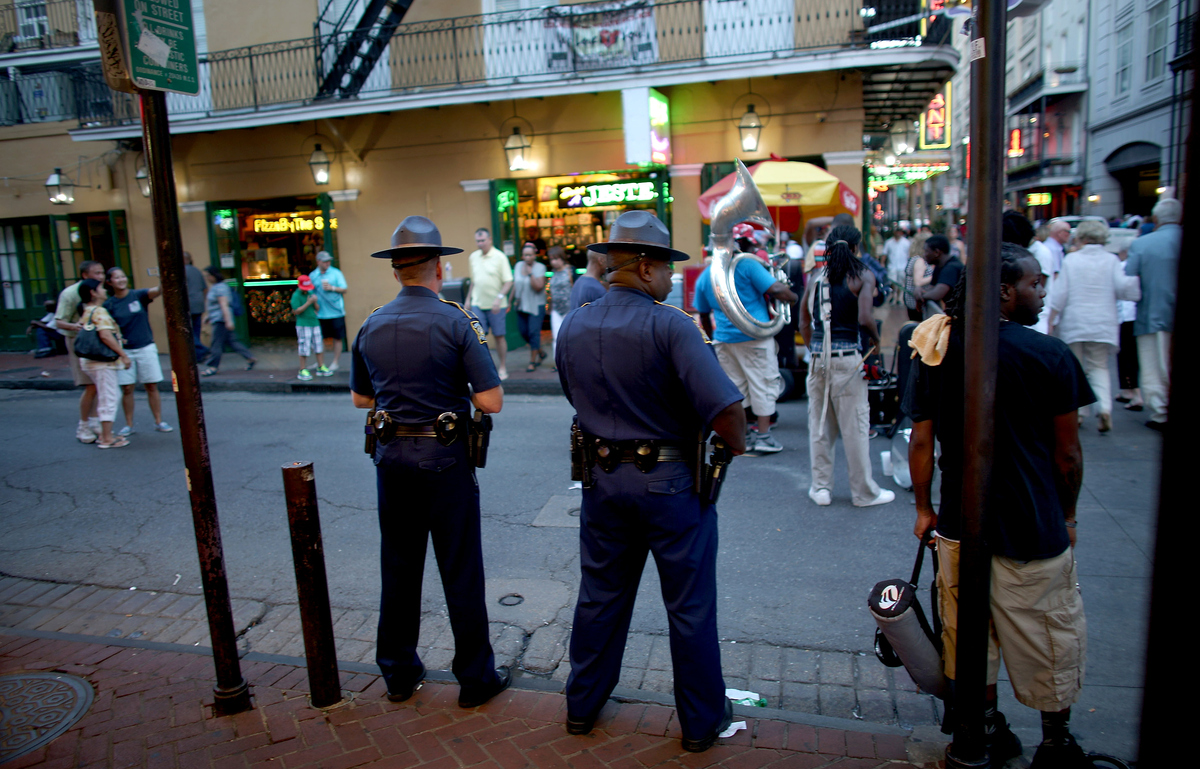 Officers with the Louisiana State Police patrol in New Orleans' French Quarter. Ordinary residents feel their neighborhoods need more protection, and they are frustrated by stepped-up efforts in key tourist areas such as the French Quarter.

Editor's Note: This story contains strong language that some may find offensive.

The smell of blood hung in the air where 17-year-old Gerald Morgan was shot, as firefighters began washing down the sidewalk around the front door of a home in New Orleans East last month.

Police say at least two gunmen jumped out of a car, opened fire, ran near a two-story house and kept shooting, also hitting a 4-year-old boy inside. The teenager died at the hospital. The boy was listed in stable condition. Police have not offered a theory for the cause of the shooting.

At the scene, anger and grief poured from a distraught young woman who identified herself as Morgan's sister.

"My little brother was too good of a f****** child for him to be dead, too good of a child for my auntie house to be looking how it look, with all the f****** bullet holes in there," she said. "Too good of a family around here for my little cousin to be shot in his elbow."

"I am so hurt deep down inside," she said. "I was not expecting for my brother to be dead. We aren't getting no justice."

For decades, New Orleans has struggled with a high murder rate. Ten years ago, Hurricane Katrina's floodwaters forced a mass evacuation of the city. That upheaval and displacement led to a surge in violent crime as people returned.

Now, despite several years of declining violence, a new NPR-Kaiser Family Foundation poll finds that 64 percent of people who live in New Orleans say that a decade after Katrina, there has been little to no progress in controlling crime.

And less than half of the city's residents say they trust the police to do what's right for their community. Among African-Americans, even fewer do.

Standing near the crime scene, sisters Tanelle Hearst and Francine Spears said the police must do more to keep young people alive in New Orleans.

"Stop patrolling and making sure police is in the French Quarter," added Spears, 36. "We don't need New Orleans police to protect the tourists."

"We need New Orleans police to protect us," the sisters said in unison.

Despite those concerns, statistics show crime is actually down in New Orleans, and murder dropped for three years straight starting in 2011. In 2014, the city's murder tally — at 150 — was the lowest it had been in more than 40 years.

New Orleans Police Superintendent Michael Harrison likes to think the decline came in part because of a program that targets young men ages 18 to 24 and pairs tough enforcement with social services such as job training.

But even with that effort, New Orleans still has a murder rate that's almost four times the average for a city its size — and much higher than big cities such as Chicago, New York and Los Angeles. By early July, murders hit triple digits, two months earlier than in recent years. Harrison says that's not due to a rise in gang crime.

Peter Scharf, a criminologist at Louisiana State University, says the shrinking New Orleans Police Department is a problem: About one-third of the officers have left since 2010. He says that may be due to officer dissatisfaction with federal consent decrees and mandated reforms that grew out of probes of officers committing crimes during Hurricane Katrina. Scharf says one of the unintended consequences of the reforms is what he calls de-policing.

"Police sit in their cars and wait for something to happen. And with the manpower loss, in addition to the surveillance from the consent decree and other groups, has resulted in a very cautious police department," he says.

Harrison disagrees, and says despite this year's spike in murders, the city's latest crime statistics — showing a drop in overall crime — are proof there's no de-policing. He says the department is giving pay raises to retain officers and is training new recruits.

Even so, the NPR-Kaiser poll shows there has been a decline across the board in the share of New Orleans residents who believe their neighborhood has enough police. In 2010, more than half — 58 percent — thought so. This year, that number is far less: 44 percent.

Meg Lousteau is the head of Vieux Carré Property Owners, Residents and Associates, a neighborhood advocacy group in the historic French Quarter, the heart of the city's tourism industry. She says several crimes in the district in recent years have left residents and property owners shaken.

That's especially true for business owners and city officials counting on tourism dollars. So New Orleans turned to the state police to help patrol the French Quarter. There are privately funded patrols as well, and there will soon be a vote on a sales tax to pay for more protection. 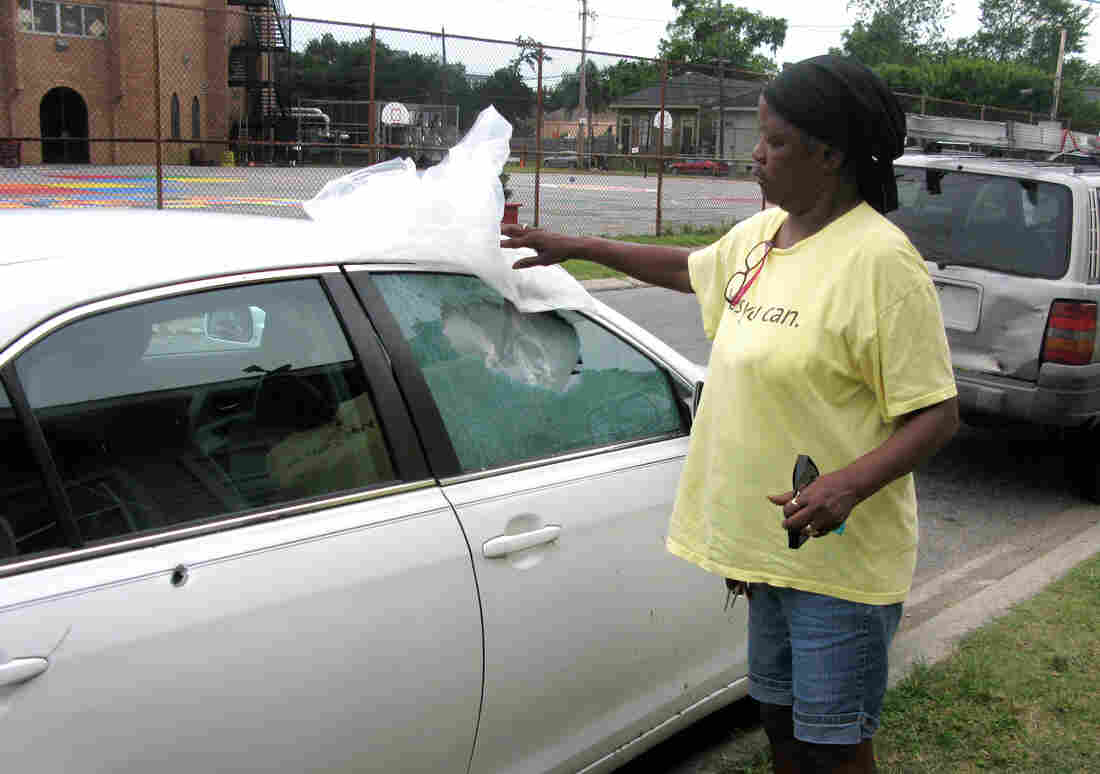 Debra Hunter shows off the bullet holes and damage to her car after a gunfight near her New Orleans home. Police say one of the two people arrested used an AK-47 assault rifle in the incident, which occurred on a weekday during lunch hour, not far from a police station and New Orleans City Hall. Cheryl Corley/NPR hide caption

Last month, there was another gunfight not far from the French Quarter and New Orleans City Hall that astonished many in the city: During lunch hour on a weekday, several people started shooting at each other; one had an AK-47 assault rifle.

Debra Hunter lives nearby, across the street from a school, which was not in session at the time. When the shooting began, Hunter was inside her house.

"When they went to shooting, everybody took a dive," she recalls.

She sits near the front stoop of her house with her daughter and grandchildren, and points to a bullet-ridden car. It's hers.

"My car is all messed up," Hunter says. "Might as well just stay laying on the floor, 'cause you get up, you might get shot."

No one died in that incident, and Harrison, the police superintendent, says arrests were quickly made. Harrison and others in New Orleans say one of the biggest obstacles for the city as it tries to combat crime is the culture of violence — a culture heightened perhaps by the trauma that came in the aftermath of Hurricane Katrina and the havoc it caused.