Accessibility links
Review: 'Prodigies' By Angélica Gorodischer Angélica Gorodischer's episodic, lyrical new novel follows (in a meandering sort of way) the magically tinged lives of a motley cast of boarders in a house that once belonged to a famous German poet. 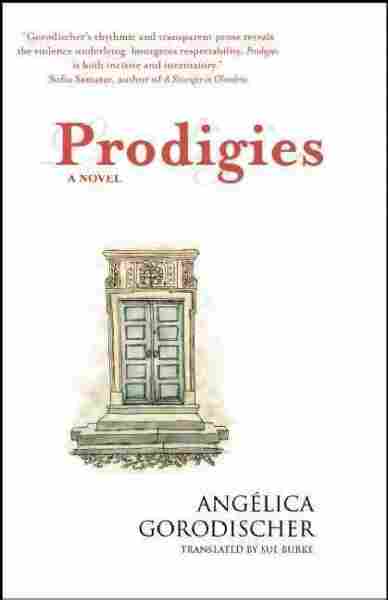 In Angélica Gorodischer's Prodigies, a home formerly occupied by the Romantic poet Novalis becomes a boarding house, in a small German town in the 19th century. At the helm of the residence is Madame Helena, who as a young bride left her unsatisfying husband and moved back to her childhood home, which she has converted into a space for boarders.

It becomes a space where lives intersect. There are her three servants — Lola, a powerful and sensual cook, fearful, timid Wulda, and otherworldly, dreamy Katja, with her premonitions and odd thoughts and communing with the dead — who move between the rooms and form a great deal of the narrative's internal architecture. The boarders, too, lend their voices: The reactionary, persnickety General, a former singer with a dramatic imagination and her long-suffering daughter, an odd, squirrely man obsessed with toys, figurines, and treasures, a nervous young student.

Prodigies, translated by Sue Burke, is one of those novels where not much happens, and yet everything happens. Act 1 is dedicated to the arrival of Madame Nashiru, who comes to town to run a jewelry shop. Her arrival is a struck bell whose tone echoes off the surfaces of the other characters. They're curious about this newcomer, and the act culminates in the first gathering of the boarders after her arrival, at supper. In Act 2, the residents and servants all witness a terrible carriage accident on the street in front of their home. In Act 3, one of the boarders leaves for America, and a member of the household becomes injured after a fall.

These few and seemingly unextraordinary events serve as beacons in an endless forest of lyricism, incantation and lists. The characters' trains of thought are like piers over the water — if you follow them long enough, and if you're willing, you can fall right into an ocean of language that cycles and repeats, one which guarantees you will eventually wash up on an unfamiliar shore. In these places, we fall into the characters' pasts, their comings and goings, their theories and prejudices, their thoughts and secrets, the rhythm of their days, their meditations. Run-on, garden-path-style sentences meander, they move sharply to one side or another, and misdirect, and then always land somewhere unexpected.

Magic and fantasy hover around the edges of the novel: Animated thoughts, mysterious winged beasts, clawed creatures occupying dreams, the dead. These magical elements move between imagination, metaphor and, possibly, reality, giving the entire book a liminal quality. Magic and language are inseparable, as is language and reality.

There's also a dark undercurrent of repression and anger that runs beneath the narrative. The boarding house sits on a street that's recently gentrified, swapping the rambunctious sounds of working class life for the buttoned-up, suppressed emotion of high society. "But then silence came with a century," Gorodischer writes, "as if saying there was no reason for delusions, and asking for polish, cleanliness, reserve, and logic instead of vanity." This systemic lockdown ominously colors every character's voice, whether they realize it or not.

The chapters of Prodigies are episodic, focusing on histories (such as the history of the house's owners), a particular character, or even a shared moment of the day, like all of the residents rising in the morning. Character and narrative don't build in the traditional sense. Instead, they accrete slowly, horizontally. Events that are alluded to in one chapter are solidified or explained in another. A few suffocating pages deep inside one character is given context from another character's eyes. Each chapter has the intimacy of rooting through a stranger's long-occupied hotel room, and in a way, that is how the narrative moves, as if one is nosily going from room to room in search of a larger truth. The experience is equal parts Thomas Bernhard, Kelly Link and Muriel Sparks.

Because of Prodigies' unusual style, it requires great care and thoughtfulness to read. It cannot be rushed through or casually scanned. An impatient reader will abandon this book long before its rich rewards can be reaped. The right audience will have a willingness to savor, to double-back over sentences, to bob along to wherever the author and characters wish to take you. If you are ready for the experience of Prodigies, it is definitely ready for you.