'Hominids' Is A Deeply Human Collection Of Speculative Fiction

'Hominids' Is A Deeply Human Collection Of Speculative Fiction 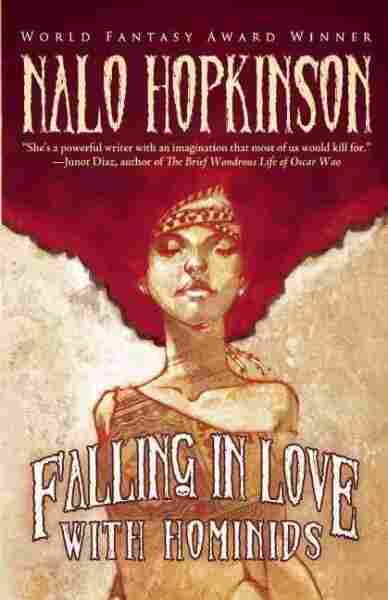 Falling in Love With Hominids

Magic happens in "Soul Case," one of the standouts from Nalo Hopkinson's latest short story collection Falling in Love with Hominids. Not a metaphorical kind of magic, either. Set in a Caribbean village that's based on the historical phenomenon of marronage — former slaves escaping into the wilderness and forming free societies — the story zooms in on a battle between villagers and the colonial army set to subjugate them. That is, until a spell is cast that weighs heavily on all who witness it.

The magic at play is the West Indian folk craft known as obeah, which pops up regularly in Hopkinson's short fiction, as well as her award-winning novels such as Brown Girl in the Ring, a science-fantasy tale of post-collapse Toronto. Hopkinson grew up in Jamaica, Guyana and Trinidad, and her immersion in Afro-Caribbean culture suffuses Hominids — although not always explicitly. In addition to the historical fantasy of stories like "Soul Case" — which hints at Gabriel García Márquez in its folktale fabulism and multigenerational scale, even more impressive considering the story is just five pages long — there's "Ours Is the Prettiest," which sets a scene of ethnic diversity in the land of Faerie.

Hopkinson's scope, as always, is far broader than she's often given credit for. "Message in a Bottle" is a chilling, darkly comic account of parenthood and genetic manipulation that deals with ageism of a different kind. The horrific implications of coming of age are also explored in "The Easthound," whose post-pandemic, Lord of the Flies scenario doesn't need originality to drive its chilling, poignant point home. Hopkinson's unerring ability to assume her characters' voices, to slip into their skins, adds to the melancholy undertow of "Shift," which retells the stories of Ariel and Caliban from The Tempest from a social-justice perspective that Shakespeare scarcely could have imagined.

"Shift" isn't the only story in Hominids to reference classic literature. "Men Sell Not Such in Any Town" nods to the poem "Goblin Market" by the Romantic writer Christina Rossetti, while "Flying Lessons" is a fleeting, magical-realism vignette about a little girl in Trinidad whose reading of Antoine de Saint-Exupéry's The Little Prince draws a breathtaking parallel with her own life. "Flying Lessons" is also one of the few tales in Hominids that feels remotely autobiographical; for the most part, Hopkinson peoples these tales with a dizzying range of characters, from a Salvation Army Santa Claus who received a staggering gift of his own to a young woman whose impossible run-in with wildlife redefines having an elephant in the room.

In her introduction to the book, Hopkinson explains how she derived its title from a phrase penned by the legendary science fiction author Cordwainer Smith. But it's more than just a hat-tip from one pioneer of the genre to another. In her youth, Hopkinson goes on to write, she hated people. Now, in her fifties, she's learned to have a certain optimism about the human race despite its innumerable cruelties and injustices. That guarded, hard-won hope — and along with it, a graceful sense of sympathy and wonder — are what make Hopkinson's stories dazzle, even when they probe the darkness. In a way, that's a magic of its own.