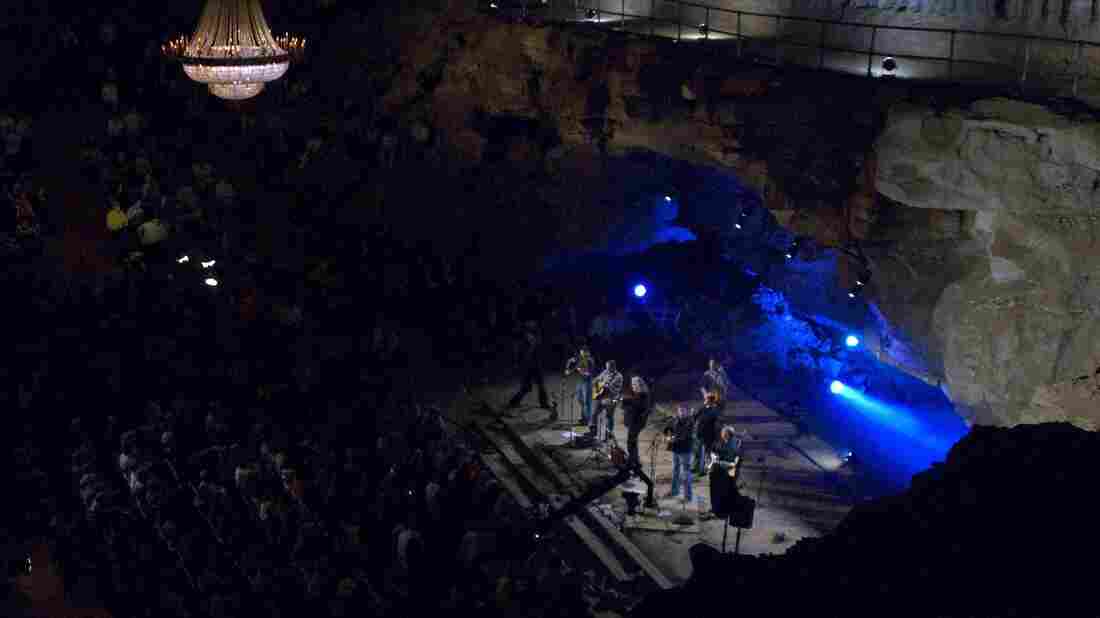 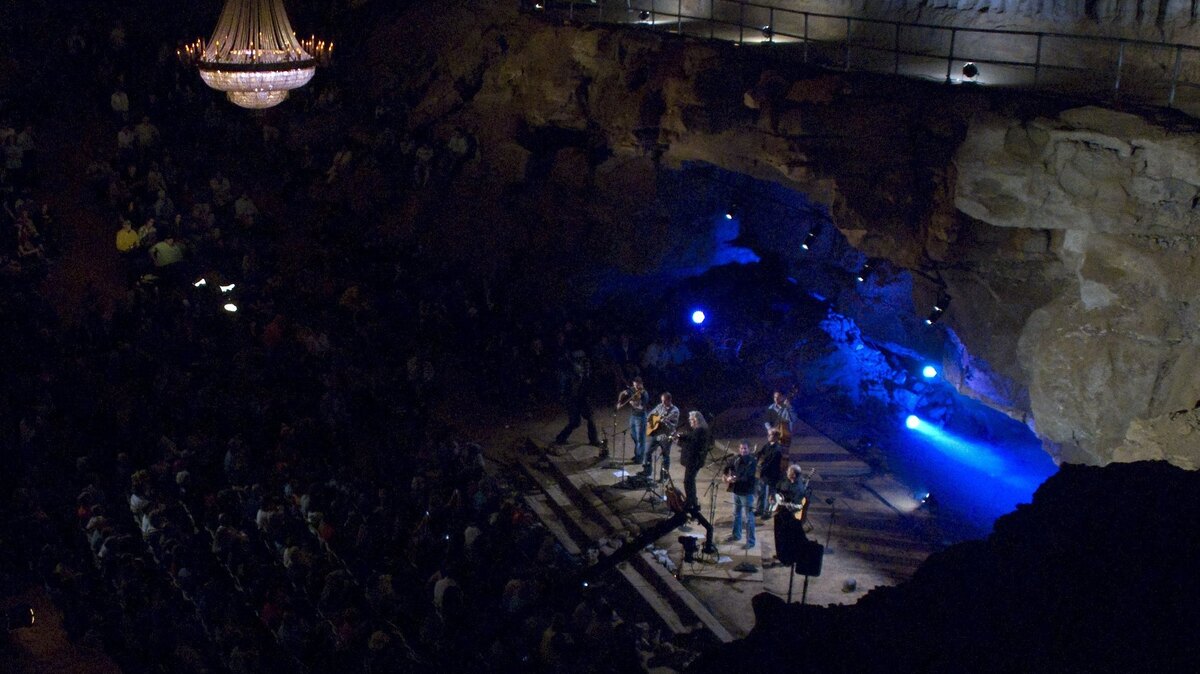 Ricky Skaggs and Kentucky Thunder perform during "Bluegrass Underground" at the Cumberland Caverns in 2010.

In Tennessee, a four-lane highway turns into a winding strip of asphalt called Dark Hollow Road. That becomes a driveway, and once out of the car, there's still a ways to go through the dense forest on a hillside. There, we find Cumberland Caverns, now host to a stage 333 feet underground.

Water and time carved out a rotunda nicknamed the Volcano Room that accommodates 600 people, albeit barely. Some perch on rock outcroppings by the stage. Neon lights accent the limestone walls. A giant chandelier hangs from the craggy ceiling.

Today's headliner is the Annie Moses Band. Fiddle player Gretchen Wolaver says she assumed the venue would be more like an outdoor stage under a rock overhang.

"When you first walk in, you think, 'Wow, this is really a cave,'" Wolaver says. "Which you would think you would have thought that anyway, but I didn't."

There are pros and cons to the subterranean setting. The sound, for one, is unexpected. This vaulted cavern doesn't create the echo-y hall you'd expect. House sound engineer Andy Kern says the cave's uneven surfaces scatter the sound waves and break them up just like in a specially designed studio.

"You know, you always think of the three-second reverb time — the 'hello, hello, hello' that just goes on forever — and it's the complete opposite," Kern says.

Then there's the temperature. Concert-goers are wrapped in blankets even though it's the hottest part of the summer. Down here, it's a steady 57 degrees year-round. Unfortunately, the humidity is off the charts, so tuning can be troublesome. And just getting instruments down here is a test in human ingenuity. Concert promoter Todd Mayo recalls when Leon Russell insisted on bringing his signature white piano, a gift from Elton John.

"He did say, 'I don't know what your insurance is like, boys, but if this one breaks, it's priceless,'" Mayo says.

Before becoming a destination music venue, this privately owned cave was just a local tourist attraction that hosted church groups and scout troops. In fact, Mayo first came because his family took the hour-long tour over a holiday weekend. Ever the idea man, the cave delivered inspiration.

"It's just like you're on another planet," Mayo says. "And I said to the girl, just like that, without even thinking, 'Do y'all ever have live music down here?' And she said, 'No, but that'd be a pretty good idea.'"

Mayo dubbed the concert series "Bluegrass Underground." It's now taped for broadcast on many PBS stations. Most shows sell out. It helps when you feature the likes of Jason Isbell. Fans fly in or drive from out of state.

"It's a rare thing that God created for us," says Jeff Winn of Alabama, a repeat visitor. "You have to walk and pay a hell of a price to get there. But it is well worth every step."

If the natural beauty and acoustics aren't enough of a draw, here's a sound you won't hear: ringing cell phones. Nobody gets service this far underground.