Accessibility links
Pizza As Autobiography In 'Slice Harvester' Colin Atrophy Hagendorf decided to review a plain slice of pizza from every joint in Manhattan — a project that evolved into a two-fisted memoir of his own life and struggles with substance abuse. 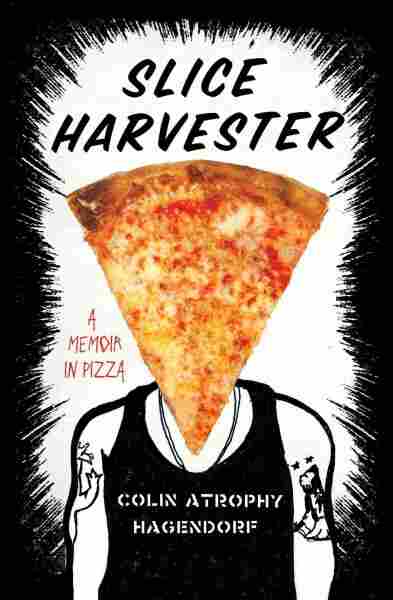 A Memoir in Pizza

Pizza is a lot of things to a lot of people. Mostly, though, it's just food. Colin Atrophy Hagendorf is keenly aware of both sides of this not-quite-burning issue in his debut book, Slice Harvester. Subtitled "A Memoir in Pizza," it chronicles a two-year period in Hagendorf's life, from 2009 to 2011, when the 20-something burrito deliveryman wrote a blog called Slice Harvester, in which he reviewed a plain slice of pizza from every pizzeria in Manhattan. Hundreds of them.

Blogs spinning off into book deals is a commonplace occurrence in the 21st century, but Slice Harvester stands out from the pack. At the start of the book, Hagendorf — a punk rocker with more than a few substance-abuse and anxiety problems — comes up with the premise for his "pizza odyssey" over a few too many glasses of wine. But once he starts the blog, he's instantly inundated with mainstream media interest; in effect, Slice Harvester is as much an account of its own unlikely creation as it is a memoir about pizza. And it's a wry, witty, surprisingly insightful one at that.

The heart of the book, though, is its pizza commentary. At that, it triumphs. From family-owned joints tucked away in odd corners of Uptown to childhood favorites in the East Village — not to mention the occasional sterile, gentrified pie boutique — Hagendorf's trek throughout Manhattan's pizzerias is detailed in sarcastic, penetrating detail. It's as much of a critique of America's foodie culture as it is a critique of pizza itself, although it never paints itself with a self-important brush. Instead, Hagendorf weaves in tales of his own life, including bouts with drunkenness, drug abuse, online dating, tumultuous relationships, and punk-rock misadventures. His voice is as confident as it is self-mocking; it's also absolutely captivating, especially as his descent into alcoholism becomes more harrowing than hilarious.

Not all of Hagendorf's choices pan out. When he spotlights the history of a certain pizzeria owner or neighborhood, his tone switches jarringly into an impersonal, almost Wikipedia-like drone of information delivery. On the plus side, that context adds much needed authority to his narrative — and saves it from lapsing into solid solipsism. The thing is, after a few chapters of Hagendorf's smart, acerbic running monologue, he's established all the authority he needs, both as a guerrilla critic and as a two-fisted raconteur.

The book is rich with asides that sometimes scathingly, sometimes achingly probe Hagendorf's boyhood, his love of science fiction, and his relationship with his father — not to mention the point at which all those slices begin to weigh heavily not just on his stomach, but on his soul. His anecdotes alone are worth the price of admission, from his pizza date with actress Phoebe Cates to his poignant visits with punk-zine legend Aaron Cometbus — the latter being a major influence on Slice Harvester, to the point where Hagendorf can stake a legitimate claim to being Cometbus' heir apparent. Not that Hagendorf isn't his own writer: His ability to veer from the profane to the profound in the same sentence is as unique as it is grounded in the punk-lit tradition.

Among all the things that Slice Harvester seeks and succeeds to be, it's a love letter to Manhattan — one stained with spilled beer and cigarette burns, but still. It's also about chasing ideals, romantic as well as culinary, and how that can be both noble and annihilating. Mostly, though, it's a rumination on innocence, and the loss thereof. Deep stuff for a book that started out as a pizza blog. Then again, as Slice Harvester so compellingly proposes, the plain old pizza pie is actually a blank canvas upon which we can, and should, project anything we wish.

Read an excerpt of Slice Harvester