Accessibility links
Review: 'Bright Lines' By Tanwi Nandini Islam Tanwi Nandini Islam's debut novel is an understated queer coming-of-age tale, set in a vividly-portrayed Brooklyn brownstone whose residents all ache for some kind of home they've never been to.

A House That's Not A Home In 'Bright Lines'

A House That's Not A Home In 'Bright Lines' 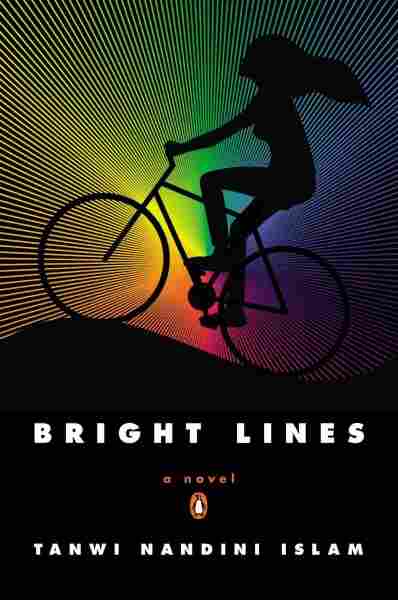 In the sweltering summer of 2003, studious and awkward Ella comes home from college and sneaks back into her own house. She's trying to avoid her adoptive parents — her uncle Anwar and aunt Hashi — and, maybe, to share the secret of her return with her outgoing cousin Charu, for whom she harbors a self-defeating infatuation. She's lived with them since she was a child, but coming back to the house is still a disconnect amid the familiarity. And though she doesn't yet know it, this disconnect is the one thing she has in common with her family: Everyone in Bright Lines aches for some kind of home they've never been to.

In this debut novel, Tanwi Nandini Islam uses Brooklyn and Bangladesh as backdrops to the internal homes of her characters, and much of the novel's satisfaction comes from the ways they overlap and interact. And home, as a concept, is fluid: It's the ghosts you carry, it's a feeling that can be bestowed or taken away, and it requires something more complicated than just living somewhere. Though the brownstone at 111 Cambridge Place is lovingly described, it isn't one of those homes that becomes a character; it's a place to contain people who are searching for what home is.

The book offers glimpses of those internal homes through the eyes of several characters, and even those seen only from outside (like Maya, on the run from a devout father and negotiating her relationship to the hijab) feel familiar and lived-in. But it's Anwar and Ella emerge as the de facto centers of the family.

Ella is particularly vivid, with a queer coming-of-age that becomes part of a deeper and more complicated search for home. Equal parts responsible and adrift, she keeps her secrets almost out of habit — like the hallucinations she's had since childhood, which are by turns unsettling and a private technicolor wonderland. The underlying cause of those hallucinations is the novel's tangential mystery, but it skirts magic realism; the miracles in Bright Lines are the understated moments of family telepathy. (Hashi offering her niece a haircut just when Ella most needs it is the sort of moment that echoes for a hundred pages.)

Anwar is, at first, equally engaging: He's the sort of patriarch who struggles to be progressive while routinely flabbergasted by his family. But where Ella cuts through the story, Anwar's voice is less clearly defined; his internal rhythms ebb and flow out of character in a way Ella's don't. Anwar never loses the affability that makes it easy for his family to forgive his fumbles, but at times it feels as though the novel is stretching him thin to accommodate events awkwardly imposed from the outside in. If the novel has Debut Syndrome, you'll find it in these moments, which lack the vibrancy of the book's best beats. Charu's awkward first time — in a Brooklyn moment so vivid you can practically smell the garbage waiting for pickup — is rendered as sympathetic and hilarious by turns. By contrast, Anwar's lust for a tenant who exists merely to lust back rings hollow in a novelist with enough promise that you feel she should know better.

But that same promise means that Bright Lines at its best becomes just what it sets out to be: An understated queer coming-of-age, a study of how much work it is to be a family, and a snapshot of a disappearing Brooklyn, set against the ghosts of the past, and a search for home.

Read an excerpt of Bright Lines