Accessibility links
Biopic 'Straight Outta Compton' Tells The Epic Story Of Hip-Hop And N.W.A The original members of N.W.A produced the film, which opens nationwide Friday. Like the group's story, the making of Straight Outta Compton — which took 11 years — is filled with drama. 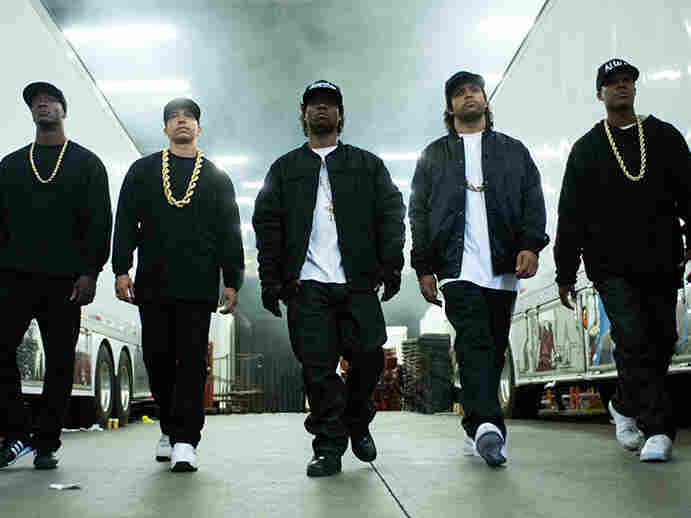 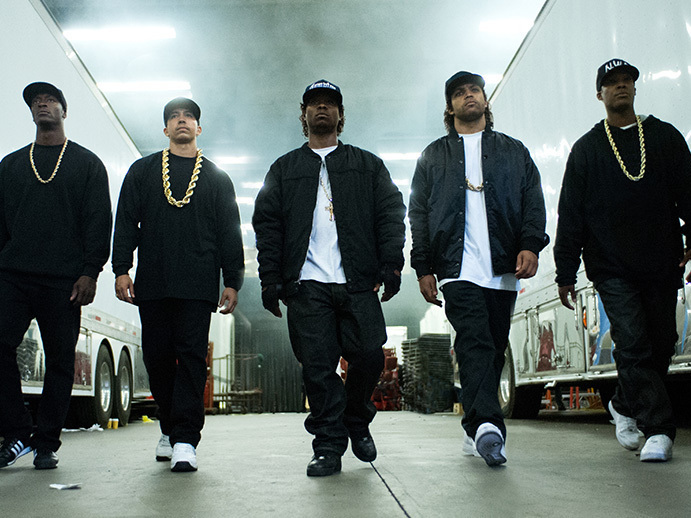 The Compton You Haven't Seen On Screen

In the late 1980s, Los Angeles hip-hop group N.W.A created a sensation and controversy with their music, which was labeled gangsta rap. Like the group's story, the making of their much-anticipated biopic, Straight Outta Compton, is filled with drama.

From the jump, the movie is a raw look at the rise of N.W.A — five tough, talented boyz-n-the-hood who became provocative hip-hop icons. It's the story of producers Dr. Dre and DJ Yella, rappers MC Ren, Ice Cube and Eazy-E, whose character in the film explains to their manager what N.W.A stands for: "Niggaz Wit Attitudes."

The movie depicts how their attitudes were shaped in the badlands of Compton, a city in south-central Los Angeles County with a reputation for drugs, crime and street gangs and a shocking murder rate. After years of getting racially profiled and harassed by the police, N.W.A obscenely defied the cops on vinyl and onstage.

One scene re-enacts a 1989 concert in Detroit as the band performs their song "F*** tha Police." The scene shows the cops descending onto the stage, inciting the audience to protest. The song had earlier prompted the FBI to write an angry letter to N.W.A's label, Ruthless Records, which in turn used it to generate publicity.

"This kind of counter-cop resistance music existed before N.W.A, but N.W.A gave it its name," says Dan Charnas, author of The Big Payback: The History of the Business of Hip-Hop. The former writer for The Source magazine says N.W.A's diatribes against police brutality put West Coast rap on the map. And Charnas says their songs are still relevant today.

Ice Cube, born O'Shea Jackson, was just 16 when he joined N.W.A to write what he called reality raps. "We always saw ourselves as street reporters," he told NPR, noting that "F** tha Police" continues to be used during protests against the police, from Los Angeles to Ferguson, Mo.

"This song was bigger than N.W.A at that point — it was an anthem," Ice Cube says. "We just wasn't five guys crying wolf or complaining about our little incidents with the officers, but that it was an epidemic and it was everywhere."

The movie includes vulnerable moments of brotherhood and friendship, and a moment during the 1992 LA riots depicting the truce between the Bloods and the Crips gangs. The film also includes the group's musical beefs, their business dealings with manager Jerry Heller and menacing incidents involving former bodyguard Suge Knight, who co-founded Death Row Records with Dr. Dre.

Long Road To Making The Film

Ice Cube, who is also one of the movie's producers, says getting Straight Outta Compton made was rough. "It was hard to get the financing that we needed, to license all the music we needed, to also get a studio behind the movie that wouldn't treat it like a typical hip-hop biopic," he says. "Then you had calls and threats from Jerry Heller to Suge Knight, so it just was a mountain."

Now a Hollywood actor and screenwriter, Cube says he also had to convince Dr. Dre to drop his skepticism. "He was like, 'Don't touch our history, don't mess with our legacy, don't mess it up,'" Ice Cube recalls. "And I'm like, 'We're not messing it up, we're gonna enhance it.' I just told him that we're not gonna be wack."

Dr. Dre eventually joined Ice Cube to produce the movie. But the whole venture took more than 11 years, says executive producer Bill Straus, who began his career as a production assistant on Ice Cube's movie Boyz n the Hood. Straus says the key was getting Eazy-E's widow, Tomica Woods-Wright, to release the rights to N.W.A's music.

"She had a reputation of being guarded," says Straus. "I think a lot of people had come at her, right after Eazy died — she'd inherited a lot of money. And I think that experience, like, sort of frayed her a little bit."

Straus says one of the writers invited her to meet. "The first hour, she seemed sort of guarded, but after a while it just became this love-in. And she told us so many stories about Eric. She took her shoes off; by the end of the meeting she was crying."

Woods-Wright also signed on as co-producer on the film. The movie, like N.W.A's music before it, has already been criticized for its misogyny. Casting calls offended many when they asked for "the hottest of the hottest" girls with "great bodies;" "light-skinned" girls with "small waists [and] nice hips," as well as "medium to dark skin tone" African-American girls who are "poor" and "not in good shape."

The filmmakers don't apologize for the anti-female lyrics and dismiss their early antics as boys will be boys. But all these decades later, Dr. Dre's new album, Compton, inspired in part by the movie, includes the song "Loose Cannons" in which the rapper kills a woman and buries her body.

That song is not in the movie, but Straus says the first drafts of the script did include a scene in which Dr. Dre brutally attacks TV host Dee Barnes during a record release party. That alleged incident in 1991, for which Barnes filed a $22 million lawsuit, didn't make it into the final cut.

Dr. Dre declined to be interviewed by NPR.

There are other incidents alleged to have happened in real life that didn't make it into the film. Director F. Gary Gray told NPR, "The original version of this movie was three hours and 30 minutes long, and the original script was almost close to 150 pages. And you just have to make a lot of decisions when you're in a process like this, 'cause you can't release the Gone with the Wind. They call it the Lord of the Rings version. It was so long. And we just had to really pick and choose, and I think we picked the right things to tell the story."

Gray says he wanted the movie to be authentic. He put his actors, including Ice Cube's son, O'Shea Jackson Jr., through a hip-hop boot camp, teaching them to walk, talk and rap like they did in LA in the 1980s and '90s.

"Instead of hunching down and getting low like these guys perform nowadays," said Gray, "standing up straight with chin out with bravado was part of it, with their chest out."

Gray says he insisted on filming on location in Compton and South Central LA, though he shot scenes of the LA riots in the San Fernando Valley. He says audiences might be surprised the movie is more than just a long rap video.

"Some people say, 'Hey, it's something kind of Shakespearean about this movie,' " Gray said. "You have brotherhood and betrayal, you have tragedy and triumph, the rags-to-riches element. Think about it: Dr. Dre starts in a garage spinning on two turntables. Then he becomes a billionaire? That's crazy."

Of course, not everyone from N.W.A's heyday is a billionaire or a movie star. Suge Knight is in jail awaiting a murder trial after allegedly running down two people during the shoot for a commercial for the movie. Still, N.W.A's music resonates across the country as protests against police brutality take place.

When the pioneering album Straight Outta Compton came out in 1988, it went double platinum. Now, Universal Pictures hopes N.W.A's story is a hit on the big screen.