Accessibility links
Adopting A Buddhist Ritual To Mourn Miscarriage, Abortion More Americans are using mizuko kuyo to grieve the loss of a child, whether it be from a miscarriage or an abortion. Those who participate say it helps them learn to balance love and loss. 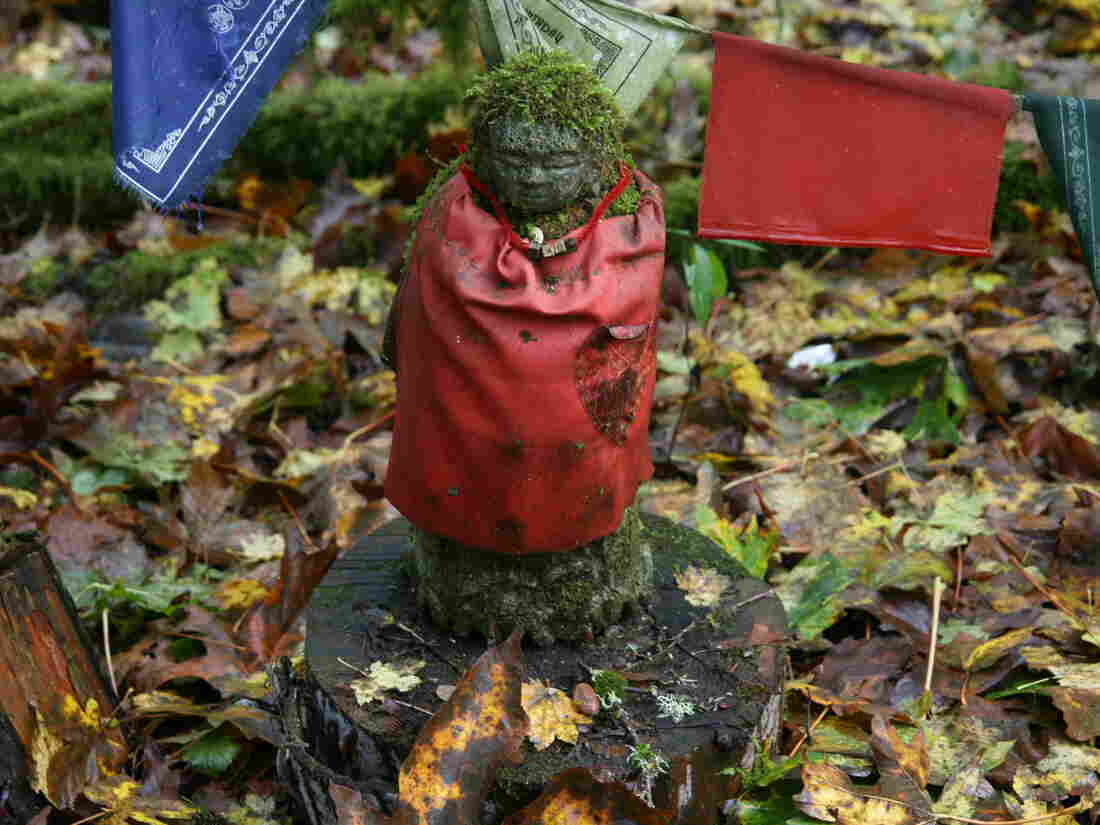 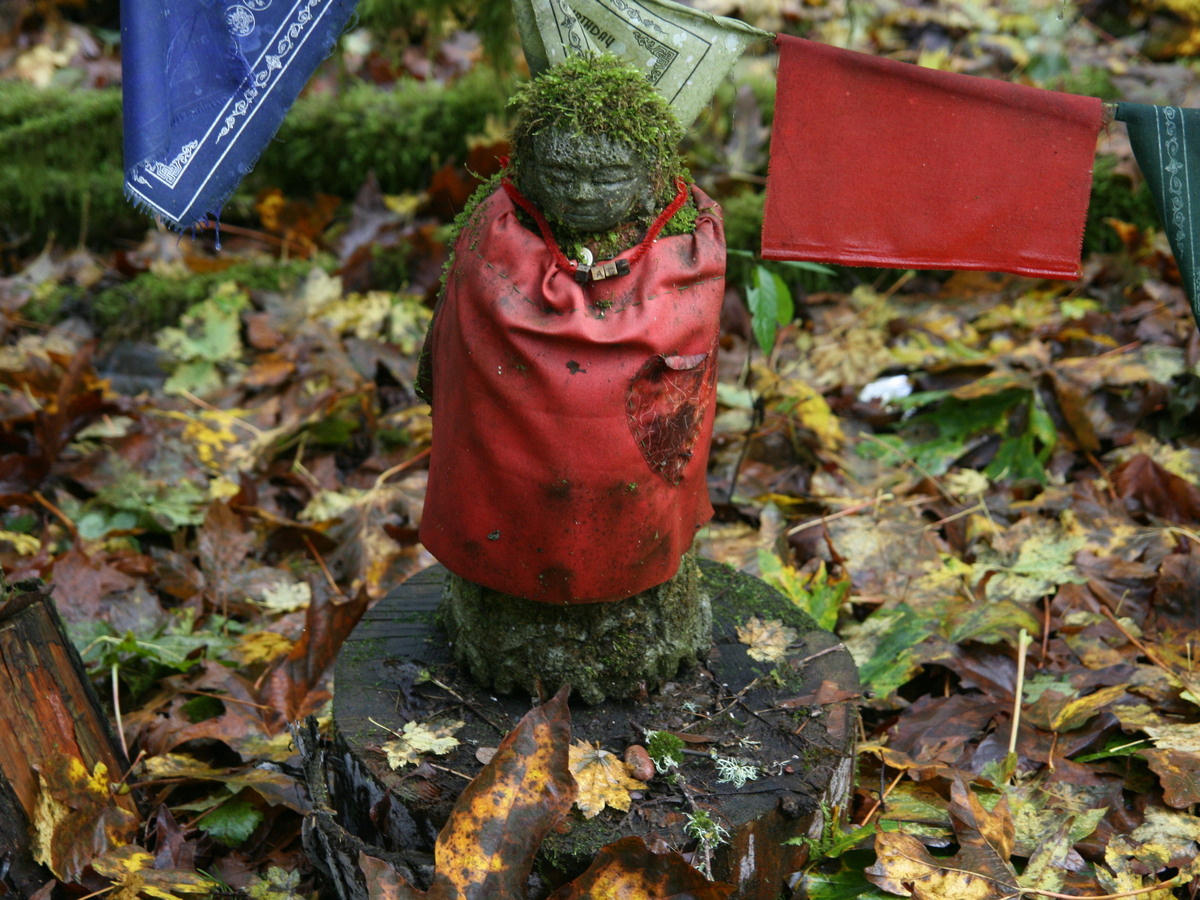 A Jizo figure at the Great Vow Zen Monastery in Clatskanie, Ore.

When parents lose a child, there are rituals to mark their grief — holding funerals, sitting shiva, bringing casseroles. But when that loss happens before birth, it often isn't marked. Sometimes, it's barely even mentioned. It's different in Japan, which has a traditional Buddhist ceremony that some Americans are adopting as their own.

When photographer Ali Smith was trying for a second child, she had four miscarriages. With each pregnancy, she tried to keep her hopes in check. But, she explains, you can't always help yourself.

"There's always a part of you that goes into the future, and starts to build a little idea of what your life's going to be like. Once that stops, something very large has stopped for you," Smith says.

And it can be tough to move forward.

"The pain of miscarriage is very private," she says. "And you're not even really sure how much you're supposed to be grieving.

Even when that loss is a choice, it can still be a hard one. Katherine Rand is a chaplain who had an abortion in high school. She explains that she carried around her grief for a long time, but felt as though she couldn't talk about it.

Both Rand and Smith decided to come face-to-face with their grief in a ritual that more and more American Zen centers are offering: mizuko kuyo. Zen teacher Jan Chozen Bays participated in one of the earliest American mizuko kuyos, about 20 years ago.

Chozen, as she's known, was dealing with pain from her own miscarriage, as well as the pain from her work as a pediatrician specializing in child abuse. Since that first ceremony, Chozen has held several dozen over the years at the Zen center in Oregon.

Ceremonies begin with making some sort of token, like a bib or a necklace. There are chants to Jizo, who serves as a sort of patron saint for children.

The garden at Chozen's Great Vow monastery is filled with hundreds of moss-covered Jizo statues, wearing these rain-soaked bibs and bonnets. Walking through, you're hit with the enormity of love and loss it all represents.

"You have to be able, when you're holding the ceremony, to hold the grief of an entire room. You have to have equanimity yourself with the fact of death. We're not working with an individual on their individual grief. The ceremony does that work by itself," she explains.

That work balancing love and loss deals with timeless questions. But mizuko kuyo, even in Japan, is surprisingly modern.

"Kuyo rituals are an ancient format of Japanese Buddhist practice. But kuyo for mizuko, for a departed child spirit, so far as we can tell, really only goes back to the post-World War II situation," explains Jeff Wilson, a professor of Buddhist at the University of Waterloo.

That's when the Japanese abortion rate rose significantly — a combination of increased legal access, post-war pregnancy boom and post-war recession. And, Wilson says, the ritual that developed in response looks different from the American version.

"The actual ceremony itself will be almost entirely conducted by the Buddhist priest, and the woman may or may not even be present. The heart of the ceremony there is attention to the feelings of the mizuko," he explains.

In America, the focus shifts from Jizo and spirits to the women and men who have felt a loss. And at ceremonies like the one Katherine Rand attended to mark her decades-old abortion, the loss is worked through together.

Why It's Good To Talk About Miscarriages

Why It's Good To Talk About Miscarriages

"The minute we started chanting, the tears just started falling," Rand says. "It's so powerful to hear 35 people's voices raised, and to know that they were intentionally raising them to honor this life that had not come into being."

Rand has practiced Buddhism for years. And although she'd talked about these issues with friends and therapists, the formality and fellowship of the ritual felt different.

"I think it was just this real, huge sense of acceptance. Like you are OK. And it's OK that this happened," she says.

And the ceremony wasn't just about making peace with the past. It was also about letting go of stories she'd been telling herself about the present — namely that she was not having that child so that she could have kids later on. But as she gets older and doesn't have kids she explains that "redemption story" was causing her harm.

Putting down that story helped Rand find some peace, which is what a lot of people are looking for, including Ali Smith, who'd experienced those four miscarriages.

"I really wanted to not be sad about this anymore. I really wanted to feel like I could move on and decide, 'OK, this is what our family looks like.' And I was having a really hard time getting to that place," she says.

Like a growing number of American mizuko kuyo participants, Ali Smith doesn't have a background in Buddhism. She's not religious at all. But after her miscarriages, she was open to trying anything. So she bowed, and chanted, and when the time came, along with the other participants, Smith wrote the names she'd chosen for her miscarried children on a slip of paper. They took the paper and put them on an altar.

"I just remember looking up and seeing there were so many, so many little pieces of paper there, with so many names on them. All of a sudden, it was impressed upon me the enormity of all the pain that people go through. And you never have any idea," she says with a sigh.

The idea that life is suffering is one of the essential truths of Buddhism. And seeing that laid out so plainly — especially for losses that are usually so private — can actually bring people some peace. The American mizuko kuyo, at its heart, isn't about Jizo statues or chants. It's about compassion — for the losses we suffer, for everyone around us and for the lives all of us are living.