Accessibility links
Television 2015: Full Drops And Single Shots Television used to arrive weekly in almost all cases, one episode at a time. Now, the timing is being rearranged, and so are the conversations around shows. 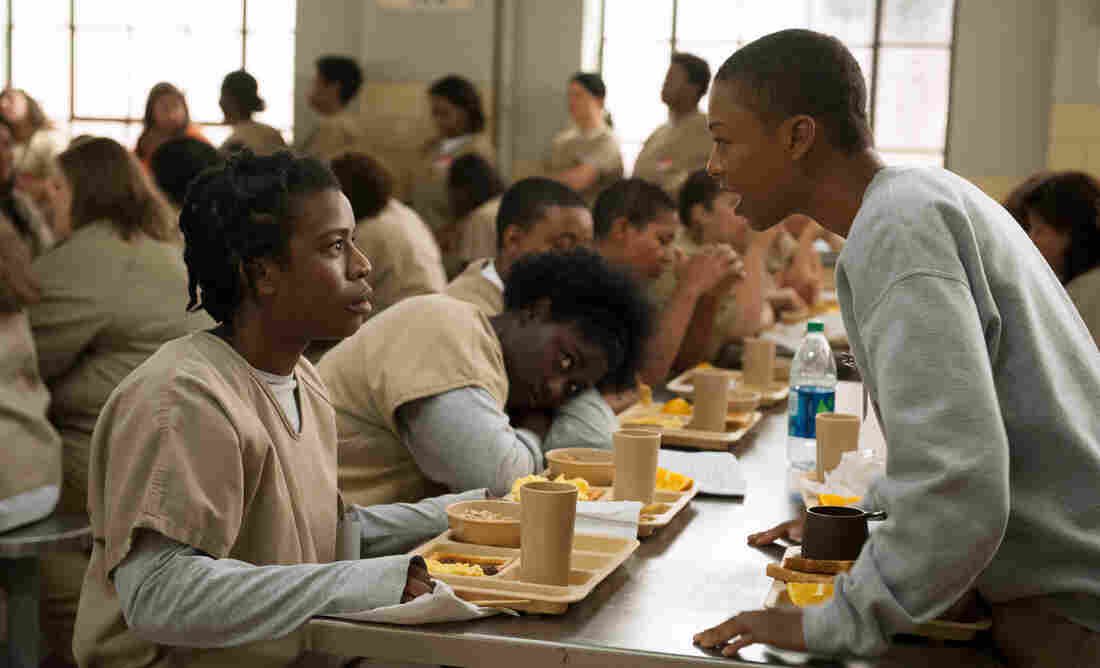 Uzo Aduba and Samira Wiley in Orange Is the New Black, one of the many series now delivered in one big bundle. JoJo Whilden/Netflix hide caption 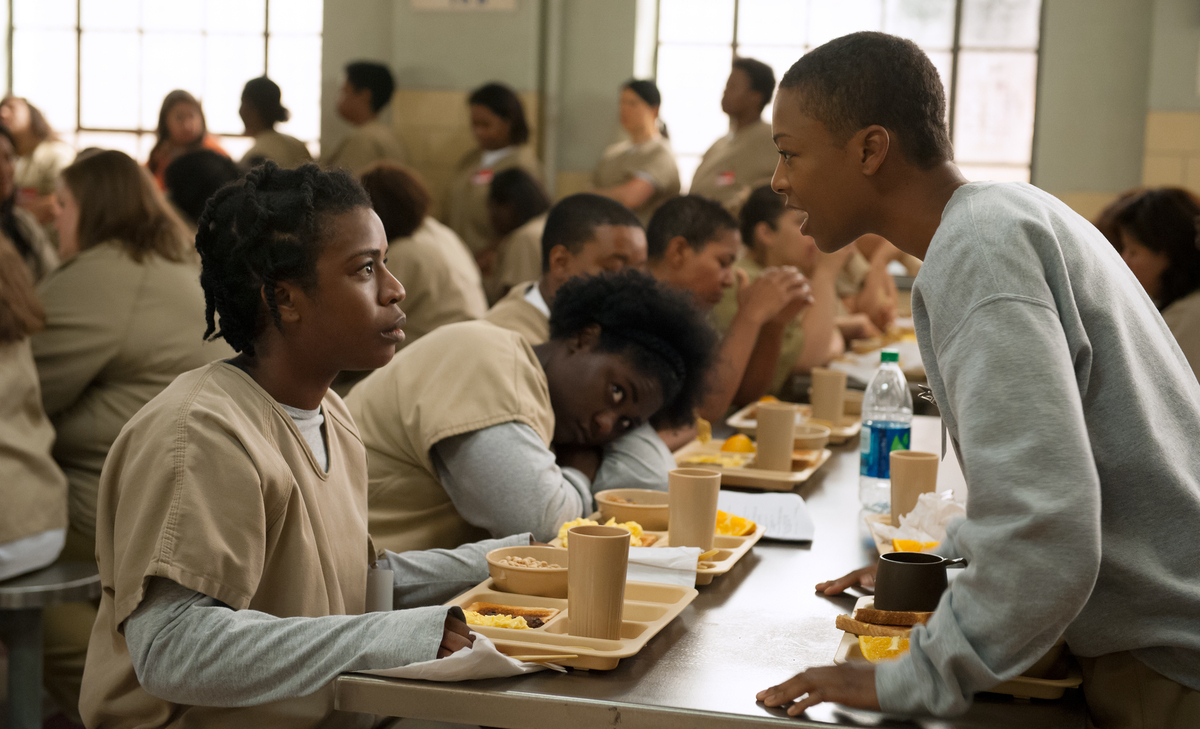 Uzo Aduba and Samira Wiley in Orange Is the New Black, one of the many series now delivered in one big bundle.

This is one in a series of essays running this week and next about the state of television in 2015. The series is based on developments at the recent Television Critics Association press tour in Beverly Hills, Calif., where broadcast and cable networks, along with streaming services like Netflix, presented new and existing shows to TV critics and reporters.

Change is often less dramatic than restless and excitable journalists want to believe it is, but the way people watch television really is wildly different than it was a few years ago. And yes, that has to do with cord-cutting and boxes and wires and screens. But despite the constantly shuffling technology, maybe the biggest substantive difference in watching is the collapse of any expectations about timing.

It used to be that television was easy to recognize, because it came into your house on a television set, one episode at a time. The VCR, the DVR, the on-demand service, even watching on computers and tablets, none of those really changed that fundamental reality. What complicated it most was the Netflix decision, which was followed by the Amazon decision, to release all the episodes of an original series at once, a practice we'll call, just for convenience, a "full drop."

The full drop is superficially appealing for its scheduling flexibility as well as its treatment of serialized television – when that's what's at issue – as something more like a novel, a single artistic work best treated as a whole and offered all at once. David Simon, who created HBO's The Wire, Treme and the current miniseries Show Me A Hero, has spoken at length about his misgivings about writers and viewers analyzing shows one episode at a time. In theory, if you do a full drop, you strengthen your hand against any opinion about anything except the entire series, even though the medium of television is inherently episode-driven.

There's nothing about streaming services, though, that says they have to do a full drop just because they can. That happens to be how Netflix and then Amazon decided to do it, and because they were the first two big players to get attention from streaming original series, their choice started to look like an industry standard. They have chosen to treat single-episode delivery, usually accomplished weekly, as a byproduct of broadcast scheduling – a weakness of old media. Hulu has chosen the opposite path. Hulu is delivering original series one episode at a time. That has a couple of possible advantages, according to Hulu's head of content, Craig Erwich. One is that they can choose to begin airing shows before an entire season has been produced, just like broadcast and cable channels do. That could speed up the process of getting shows to viewers.

But another is based on a paradox of new media that nicks the sparkly veneer of on-demand, binge-watched, just-help-yourself TV of the future that is sometimes so nice to imagine. Here's the way he put it, which unfortunately makes it sound like it network-talk that doesn't mean anything: "We want to give viewers the opportunity to discover their favorite shows every week. Like you, we value the shared experience and the joy of the watercooler that is television."

Here's the way in which it actually does mean something: The full-drop model, the ultimate in modernity and new media, isn't great for the ongoing cultural conversations that have been such an important complement to the development of better TV. While once-a-week viewing might seem like an old-media relic, it turns out to be a new-media advantage if you're talking about new-media conversation and engagement (for instance, Twitter) rather than new-media episode delivery (for instance, iTunes). There's probably been less interesting writing about the craft of a show like Orange Is The New Black, and it's probably been read by fewer people, than would have been the case if writers and viewers had watched and processed one episode at a time, rather than feeling obligated to watch it all at once and then spit something out before people got bored and moved on to the next show. What are the odds that the brilliant Mad Style series, in which bloggers Tom and Lorenzo took days to analyze the clothes and décor in each Mad Men episode, would have been undertaken and so closely followed if all the episodes had come out at once?

The problem is that periods of relevance, which for a week-by-week show last for months, become very short around full-drop shows. If you don't cover a show like House Of Cards in the first week, it seems over. That encourages rushed reactions from both regular viewers and professional ones, and that isn't good for the development of the hyper-analytical voices that grew up around and in support of shows like Mad Men and The Sopranos and elevated both professional television criticism and viewer engagement. As of this writing, we're nine weeks past the release date of the third season of Orange Is The New Black. Were it being released one episode at a time, we'd still be getting a new episode every week and the discussion of the season would be ongoing, probably building to a peak around the finale a month from now. Instead, it happened all at once and then quieted.

Google Trends, which tracks interest in a topic by looking at searches, is by no means a perfect tool, but the patterns it reveals can be instructive. Here's the history of the search term "Orange Is The New Black" over the last 12 months.

That peak is the week after new episodes arrived. Four weeks later, interest in the show had dropped to almost the same level as two weeks before the episodes dropped, even though a conventional season wouldn't even have been half over yet. Compare that to the shape of the graph for Mad Men, which released only seven episodes rather than 13. While it lagged in the middle of the season, it stayed well above its baseline throughout the run and had two big peaks instead of one – one around the premiere and one around the finale. Based on this particular piece of information, it looks like people thought about half as many episodes for just as long if not longer.

Here's House Of Cards, which is a highly successful show done via full-drop.

Here's Empire, a highly successful show aired one episode at a time. This graph also has a fuller shape and a double peak. (Note: the line is dotted because this one uses a beta feature to try to isolate TV show interest, since the word "empire" is so common in other contexts.)

If you believe conversations get more complex over the weeks that people watch a season (note that both Mad Men and Empire have their bigger peaks at the end and not the beginning of their runs), then they're having less time to do it when everything shows up at once.

And as series proliferate on streaming platforms, those short conversations seem likely to actually worsen the problem of good shows finding it hard to compete for attention. Without a weekly release, you won't even have a natural regularly scheduled hook to push people toward a show they might want to try. It drops as a single event, you get people interested or you don't, and then it's over. That show drops out of the comparatively small bucket of current shows and into competition with every other completed season in the decades-long catalogs of Amazon and Netflix.

That full-drop model also sacrifices the social viewing experience that has been so important for shows like Game Of Thrones and Scandal and Empire. There's no moment when everybody is necessarily tweeting about a House Of Cards plot twist on the same day, let alone at the same moment, the way they do when a Lannister invents a new method of slaughter. (Even people who didn't watch the show knew about OMG THEY SQUISHED HIM.)

In fact, it's worse than that: on the day a full-drop show is delivered, everyone can't possibly be fully caught up instantly, so everything in it is treated like a spoiler, meaning it's too soon to talk about it. But it's also finished its run, in a sense, so in short order, it's too late to talk about it. CBS Chief Research Officer David Poltrack said at press tour that about two-thirds of people are on a second screen while they're watching television. Talking to other people around what you're watching doesn't make up all of that, of course, but it's part of it. And when there's no temporal hook, those conversations aren't impossible, but they're harder. Full-drop is, in short, a pretty bad model if you're a proudly analytical TV nerd.

Full-drop and one-a-week aren't the only choices, either. Because there are so many ways to deliver television (a separate topic), you can make all kinds of deals with viewers and partners about when things can be seen. The USA comedy Playing House, for instance, has a small but mighty fan base. Its stars and creators, Jessica St. Clair and Lennon Parham, explained at press tour that in its second season, episodes are being shown weekly on USA in the usual way, but fans can choose to watch episodes early on demand before they air.

Networks can also try to use advance streaming to try to goose public interest in shows that might benefit from more than a single pilot to sample. Lifetime, for example, put the first four episodes of UnREAL online after it got very positive reviews but unimpressive debut ratings. Having the flexibility to hold out or allow a mini-binge depending on week-to-week developments is a nice option for a network to have in its pocket. It doesn't seem to have helped UnREAL's ratings all that much, but it may have helped cement the devotion of its following, and the show did ultimately get a second season.

Part of what we'll learn as more platforms experiment with more things is whether the popularity of the much-ballyhooed binge-watch actually means that everything will eventually be released as one giant piece of work. Maybe we'll wind up in a world where continuing stories are released all at once, but episodic stuff (like The Mindy Project, which will have its upcoming season at Hulu rather than Fox) will continue to be sent out one piece at a time. Maybe it will be drama versus comedy. Maybe a season will take on a completely different meaning where it might include 15-minute and 90-minute episodes. Maybe shows will release seasons in two halves. Or one week at at time free; all at once for a price.

Timing is everything and nothing; how's that for a complicated future?

Previously: Is There Really Too Much TV? Tomorrow: 25 Ways Of Watching Television.