Accessibility links
'Dark, Dark' Doings In A Slick Debut Thriller Ruth Ware's In A Dark, Dark Wood brings together a group of 20-something women in an isolated rural house for a bachelorette party — a perfect setting for buried secrets and terrible deeds. 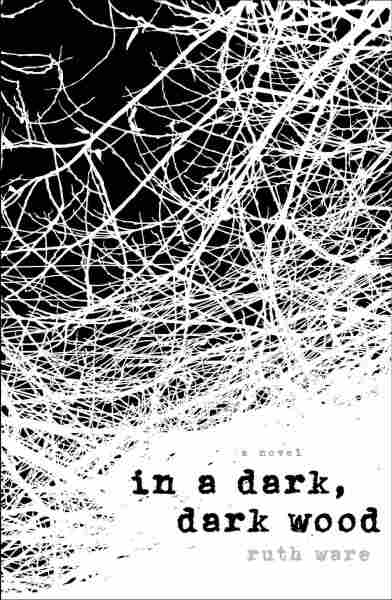 In a Dark, Dark Wood

I am slightly embarrassed to admit I had never before encountered the term "hen party" before reading Ruth Ware's suspenseful debut novel In a Dark, Dark Wood. Like so many phrases that describe all-female gatherings, such as quilting bee or kaffeeklatsch, that hen business has a slight cluck of the patronizing to it. That one of the main characters here is nicknamed "Flopsy" doesn't help things along any.

In the U.S., women celebrating an impending wedding might be more likely to party with Magic Mike, but the bachelorette bash in Ware's book takes place in a modernist glass house in the English countryside. The titular woods, so striking by day, turn blank and threatening when the sun goes down. No cell service, of course, and no neighbors, with a long, rutted, unpaved driveway between the hens and civilization. But there is also no Leatherface. It's not that kind of thriller.

In a Dark, Dark Wood opens in a hospital room, where a young woman wakes with contusions, scratches and a woeful head injury. Worse than her physical state, she is afflicted by memory loss and a nagging sense of guilt. She sees uniformed policemen stationed outside her room. "What happened?" she asks herself. Close upon the heels of that thought comes another one: "What have I done?"

Horrific images stab into her brain: "I am running through moonlit woods, with branches ripping at my clothes and my feet catching in the snow-bowed bracken." She recalls a road, the roar of a car engine, headlamps. Calling out "Stop!" Then, nothing.

It's an arresting beginning. Past-tense chapters of the weekend in question then alternate with the present-day narration of recovery and inquiry into a murder. Who is the fox in this henhouse? Could it be Leonora Shaw, the narrator? Or the sole male guest? One of the other cracked bridesmaids?

The guests address Leonora, slightly confusingly, as both "Lee" and "Nora." A crime writer who describes herself as "a professional liar," she lives a quiet life in London, with no flat-mates, no 9 to 5, and a solitary daily run. Leonora is such a loner she doesn't even have a cat.

Her invitation to the weekend party comes via email at short notice from a woman she has never met. Flopsy assembles a motley crew of millennials for a weekend far out in Northumberland; Leonora has been included in, but not — oddly enough — invited to the wedding. She has issues with the bride-to-be, a former friend, a classically beautiful blonde named Clare Cavendish, who "always did like secrets." Here, Ware comes into her own, outlining the harsh undercurrents of a friendship that 10 years back took a wrong turn.

The six partygoers sprawl in the cavernous living room of the country house, downing frozen pizza, knocking back shots of tequila and snorting lines of cocaine (Ware has a real ear for their kicky, tipsy dialogue). From the point of view of anyone lurking in the woods, they would seem to be actors on a stage.

But the party isn't all fun and games. Under the promptings of police and fellow partygoers, fragments of the weekend float to the surface. The crime writer in Leonora analyzes the situation. "It's like opening up the back of the machine to see the crude workings grinding away inside," she says. "There's a disappointment in the banality of what makes people tick, but at the same time, there's a kind of fascination at seeing the inner coils and cogs." By the end of the tale, there's blood in the ticking clock's escapement.

This novel is the first offering of a new imprint, Scout Press. Publisher's initial title, writer's debut — firsts don't necessarily guarantee great crime fiction. But In a Dark, Dark Wood makes for an easy read, with some fun twists and turns. The kind of breezy fluff, in other words, that you might want to bring along were you to spend the weekend at a hen party.