Accessibility links
Review: Maddie & Tae, 'Start Here' With a sound rooted in rich vocal harmonies and acoustic instrumentation, the young country-pop duo explores a sense of living in between childhood and the next thing. 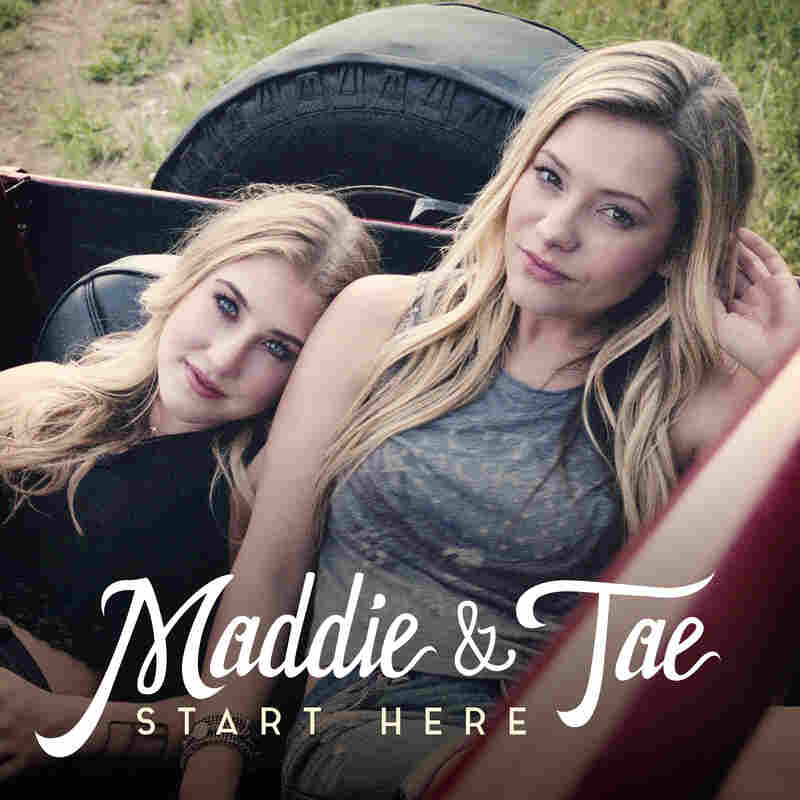 People on the cusp of maturity get called a lot of things. They're juveniles when they're in trouble, teenagers when they're having fun, adolescents when they're at the therapist's office, young adults when they're reading or going to see a movie based on a favorite book. As for pop music, that's youth's realm, incorporating the slang, dances, shifting mores and free-floating fears of every new generation. Yet it isn't that easy to capture, in a song, the particular sense of living in between childhood and the next thing. The girl groups and Brill Building collaborators did it in the 1960s; boy bands and high-school rappers like the current hitmaker Silento sometimes manage it today. Mostly what we get, though, is kids putting on adult masks, or grown-ups constructing memory palaces of youth heavily decorated with cliches. That's why the sound and sensibility of the country-pop duo Maddie & Tae hits such a sweet spot.

At 19 and 20, Madison Marlow and Tae Dye aren't typical pop undergrads. They met at 16 because they shared a vocal coach, and were ambitious enough to regularly drive between their Texas and Oklahoma hometowns to collaborate. (Supportive parents helped.) At 18, they moved to Nashville and signed a development deal with Big Machine, the label whose most successful artist, Taylor Swift, has embodied the spirit of white middle-class young adulthood for nearly a decade. Maddie & Tae have been carefully groomed to be different than Swift, however — the duo's sound is firmly rooted in the country harmonies and acoustic instrumentation that Swift has abandoned, and its songs stress the themes Swift only occasionally, if brilliantly, touches upon: friendship and female rivalry, girl-power independence and, most of all, the emotional challenges that arise when kids upon whom hopes and dreams have been pinned find themselves at the moment of impact with their own futures.

Start Here, released on Big Machine's affiliate label Dot, is a historically minded set that strongly connects with the realities of life for today's high-achieving (and, let's be honest, privileged) kids, who have more freedom than ever but also more expectations pinned to them. In "Waitin' On A Plane," the tear-jerking ballad "Fly" and "Downside Of Growing Up," Maddie & Tae tap into the story of arrival that's always been key to country's small-town-to-the-big-city mythos. Co-writing with mentor Aaron Scherz and a handful of top Nashville songwriters, they play upon familiar imagery while livening it up with telling details. (When Maddie sings of wishing her dad were nearby in "Downside," you can just picture the leaky kitchen sink in her new apartment.) Romance is part of this moment, but Maddie & Tae's love songs are almost always about something else, too: being outdoorsy in "Shut Up And Fish," loving life on the road in "No Place Like You," being queen of a neighborhood in "Your Side Of Town." Romance never solves things for Maddie & Tae. It's a good part of a busy life; sometimes it's not worth it. The most enduring romance celebrated here is the creative friendship embodied by the duo's flawless, mobile harmonies.

Producer Dan Huff, known for guiding some of country's most pop-wise artists (Faith Hill, Keith Urban, Hunter Hayes), highlights the interplay between Maddie & Tae's voices, while also honoring their professed main source of inspiration, the Dixie Chicks, in tracks that have plenty of twang and open space. "Girl In A Country Song," the sassy protest against bro-country sexism that gained the duo its first hit, sits comfortably here among ballads and light rockers that are also playful, but which don't play as comedy. ("Shut Up And Fish," the album's other novelty song, works by capturing the spirit of a vintage Grand Ole Opry skit.) The production is bright and ready for the radio, but the songs always return to a tone of reflection and gently nurtured hope. Maddie & Tae have a shining future before them, but this is an album the pair can only make once — at this age, in this special circumstance, with nothing fully resolved. "It's my time to paint a little streak on a blue sky," they sing in "Waitin' On A Plane." Those streaks only last a while, but the changes they mark are what make a young adult her own person.