Accessibility links
'Zer0es' Takes The Cyber-Thriller To An Electrifying Extreme Chuck Wendig's brisk new thriller deals in cutting-edge tech, but it's traditional at heart, pitting a rag-tag band of hackers against a big, sinister cyber-entity and the threat of global disaster. 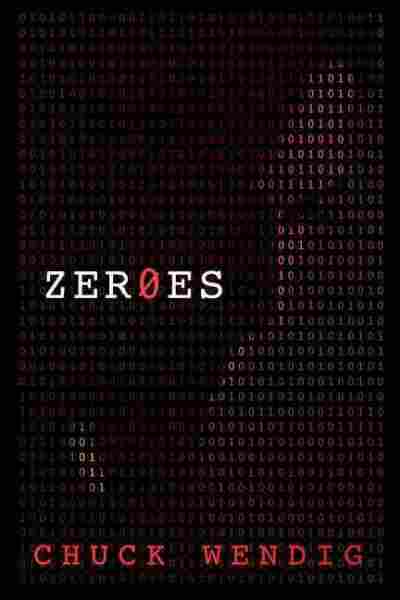 Hardly a day goes by without some new form of technological menace rearing its head, from the outfitting of drones with handguns to the hacking of cars' navigation systems. It's a fear — and fascination — that science fiction author Chuck Wendig cranks up to 11 in his new cyber-thriller, Zer0es.

Zer0es is a novel about cutting-edge tech, but at heart it's as traditional as they come. Using the reliable, shopworn premise of The Dirty Dozen as his blueprint, Wendig throws together a ragtag group of hackers from a broad stretch of backgrounds, each of whom has been sentenced to hard time for their online crimes. That is, of course, unless they agree to undertake a secret mission: From DeAndre Mitchell, a streetwise identity thief, to Wade Earthman, a backwoods conspiracy theorist, these characters are rounded up and whisked away to a compound called The Lodge, where they're trained for their big, earth-shaking job — one that winds up involving a sinister, rogue cyber-entity known as Typhon. Along the way their pasts and souls are laid bare, including those of their taskmaster Hollis Copper, a government operative whose own traumatic history continues to haunt him.

As familiar as this template is, Wendig sets off all the fireworks he can with it. As his five hackers clash with each other, both personally and ideologically, at The Lodge, their growing awareness of the dark forces lurking behind the walls of the government — and of reality — kicks the suspense into high gear. Wendig is an ace at pacing, and he hurtles the reader through hacking sequences and action scenes with equal bang. It's not an easy task to make a sitting-and-typing session feel nail-bitingly tense, but Zer0es' high-octane blend of nervy characters, dark humor and bristling dialogue carry the day. Even when he gets his geek on, his well-researched, efficiently-deployed technobabble never threatens to overwhelm.

It's not an easy task to make a sitting-and-typing session feel nail-bitingly tense, but 'Zer0es" high-octane blend of nervy characters, dark humor and bristling dialogue carry the day.

If there's a fault to be found in Zer0es, it's in the tone. The many point-of-view characters sometimes get flattened by such little page-time, although Wendig makes the most of their volatile chemistry and quirks. Like a novelization of a summer blockbuster yet to be filmed, the book sprints past the quiet, poignant moments in its relentless pursuit of the next explosion — be it real or virtual.

Wendig makes it look breezy, but there's a deeper layer of story at work. While Zer0es is unabashedly a whip-crack thriller — the plot eventually goes global, to the point where devastating blackouts in New York and Iran's nuclear program come into play — some finer points of morality and philosophy pulse beneath the surface. What is the nature of privacy and individuality in a world increasingly reliant on networking? With borders often rendered meaningless by hackers, what means are justifiable in the name of national security? How can a civilization uphold any ideals at all with terms like "white torture" poisoning the discourse? Zer0es probes the many facets of these issues, but it comes down squarely on the side of the (messy, flawed, unpredictable) individual.

Not that Wendig spends too much time pondering the big questions. He's mostly here to entertain — and in its smart, timely, electrifying way, that's exactly what Zer0es does.