Accessibility links
'Fortune Smiles' Can Be Brilliant, But It's Never Easy Adam Johnson's new story collection spans the globe from former East Germany to post-Katrina Louisiana. Reviewer Michael Schaub says the book is uneven but enlightening, and brilliant at its best.

'Fortune Smiles' Can Be Brilliant, But It's Never Easy

'Fortune Smiles' Can Be Brilliant, But It's Never Easy 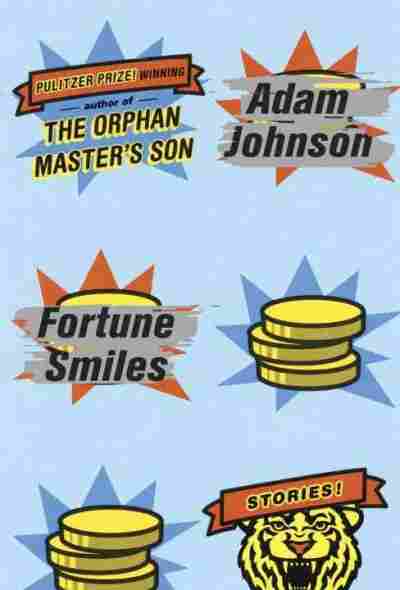 "Can you tell a story that doesn't begin, it's just suddenly happening?" asks a character in Adam Johnson's short story collection, Fortune Smiles. And you can, of course; the best stories stretch well beyond their first and last words. They're more than the opening scene; they invite the reader to imagine what came before and what will come after. They're alive and they're limitless.

That's exactly what the best stories in Fortune Smiles are like. It's a book that comes with heavy expectations — Johnson's previous book, the novel The Orphan Master's Son, won the 2013 Pulitzer Prize for fiction. This new collection, while not flawless, showcases Johnson's immense creativity and intelligence, and his admirers will find a lot to love in most of these six stories.

It begins with "Nirvana," which follows a computer programmer whose wife is suffering from a rare disease that's left her essentially paralyzed. His wife finds comfort in the music of Kurt Cobain; he deals with his stress by interacting with a hologram of the recently assassinated American president. They both do what they have to do to survive: "We tumble into a well of despair that's narrow and deep, a place that seals us off. Everything is in the well with us — careers, goals, travel, children — so close that we can drown them to save ourselves." It's a pitch-dark story in a collection mostly devoid of any kind of lightness.

In "Interesting Facts," a woman with cancer is forced to face the possibility of her own death. Her husband, like Johnson, is a Pulitzer Prize-winning novelist with Native American heritage. He steals a character from a novel she's written for a short story of his own, which forces the reader into an uncomfortable place — how much of this story, of any story, is fiction? And does it matter, anyway? It's a clever, uniquely unsettling story, filled with quietly chilling observations — as the woman notes, "The truth is, though, that you don't need to die to know what it's like to be a ghost."

Dealing With Freedom — And Disaster — In 'Fortune Smiles'

Johnson is at his best, and darkest, with "Dark Meadow," about a computer repairman with an interest in child pornography. It's hard to imagine more morbid subject matter, and Johnson doesn't pull any punches as the man wrestles with his attraction to children: "I know there are those who are born. But what of those who are made? Do they also have a choice? Can they still choose?" The ending is one of the most shocking ones in recent fiction. It's a story that's as necessary as it is difficult to read.

Not every story works quite as well. In "George Orwell Was a Friend of Mine," a former East German prison warden who refuses to come to terms with his past cruelty is forced to confront it when a stranger leaves mementos of it on his lawn. The warden lives in deep denial and tries to explain away his actions with protestations like "I had a duty to the larger picture" and "I only ran the prison." Johnson's writing is fine, but the warden comes across as one-dimensional, a stand-in for every person who stubbornly refuses to acknowledge the pain he has caused others.

The other two stories, "Hurricanes Anonymous" and "Fortune Smiles," are beautifully written, but seem a little incomplete. In the former story, Johnson does a wonderful job portraying a southwestern Louisiana recovering from Katrina and Rita, but it feels rushed, like a story that wants to be a novel. The latter story, about two North Koreans who have defected to the south, is evocative but rambling; Johnson seems a little unsure of himself.

But these are minor concerns. Johnson is tremendously talented, and even though not all of the stories cohere, they still manage to enlighten. The best stories in the collection are nothing less than brilliant, even if the worlds he creates aren't necessarily ones we want to live in. But great literature isn't about making the reader comfortable; it's about coming to terms with the truth, whether it's beautiful or ugly. And that's harder than it looks — as one character notes, "The most vital things we hide even from ourselves."