Accessibility links
Climbing Documentary 'Meru' Is A Hair-Raising 'Peak Experience' A new documentary charts the attempts of a trio of American climbers to be the first to scale Meru Peak, a 21,000-foot Himalayan peak. Critic David Edelstein says Meru is "cunning" — and terrifying. 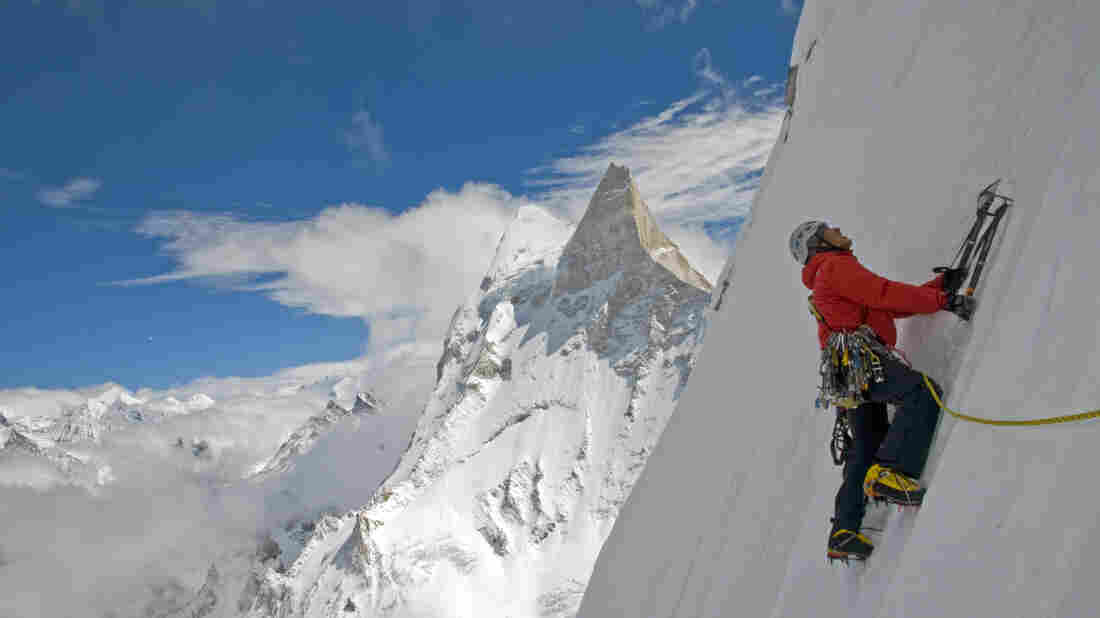 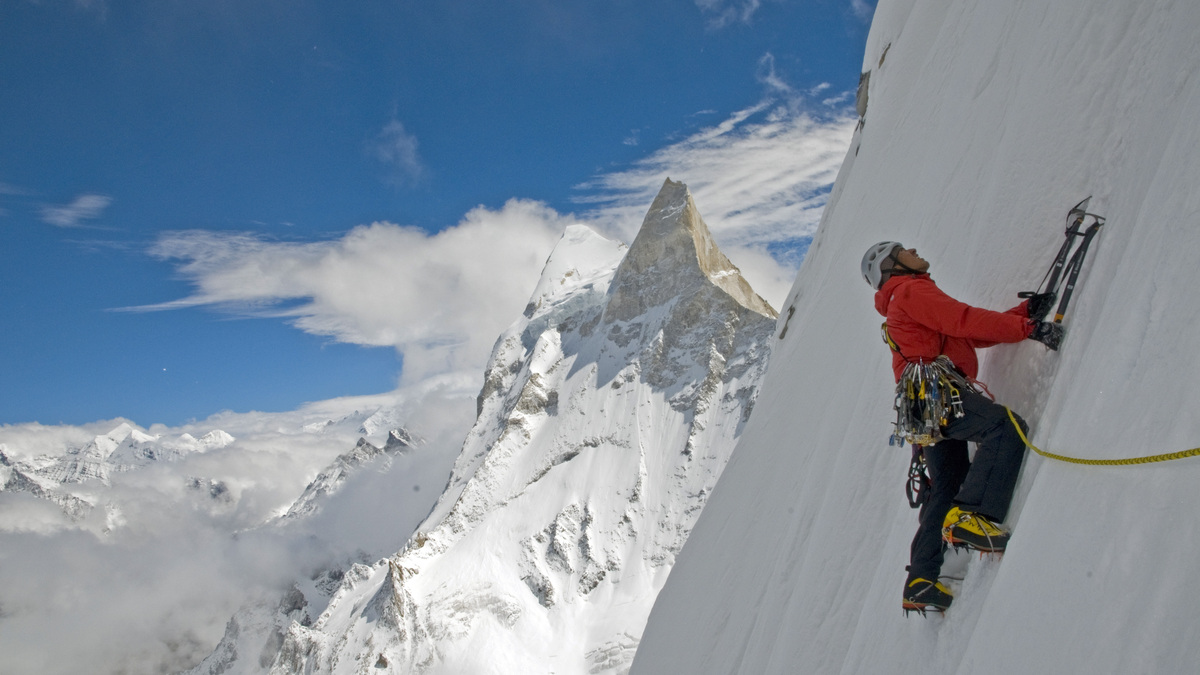 A climber takes on Meru Peak in Garwhal, India.

The documentary Meru charts the attempts of a trio of American climbers to be the first to scale Meru Peak, a 21,000-foot Himalayan mountain that begins near the headwaters of the Ganges River in India.

It's the sort of movie that's frequently called "inspiring" for its depiction of humans testing themselves physically, emotionally and perhaps even spiritually against the elements, and I get that. But I wasn't inspired. I was nearly out of my mind with terror.

Although no one in the film mentions the fact, two of the men are not only climbing but filming their climb, which accounts for the Blair Witch Project vibe. I thought there'd be a crawl at the end saying: This footage was discovered at the bottom of a crevasse. The men were never found. 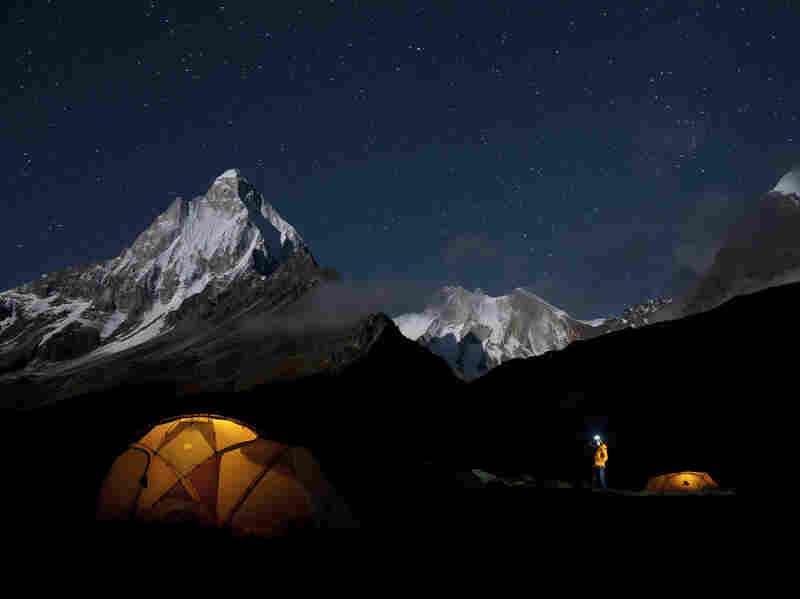 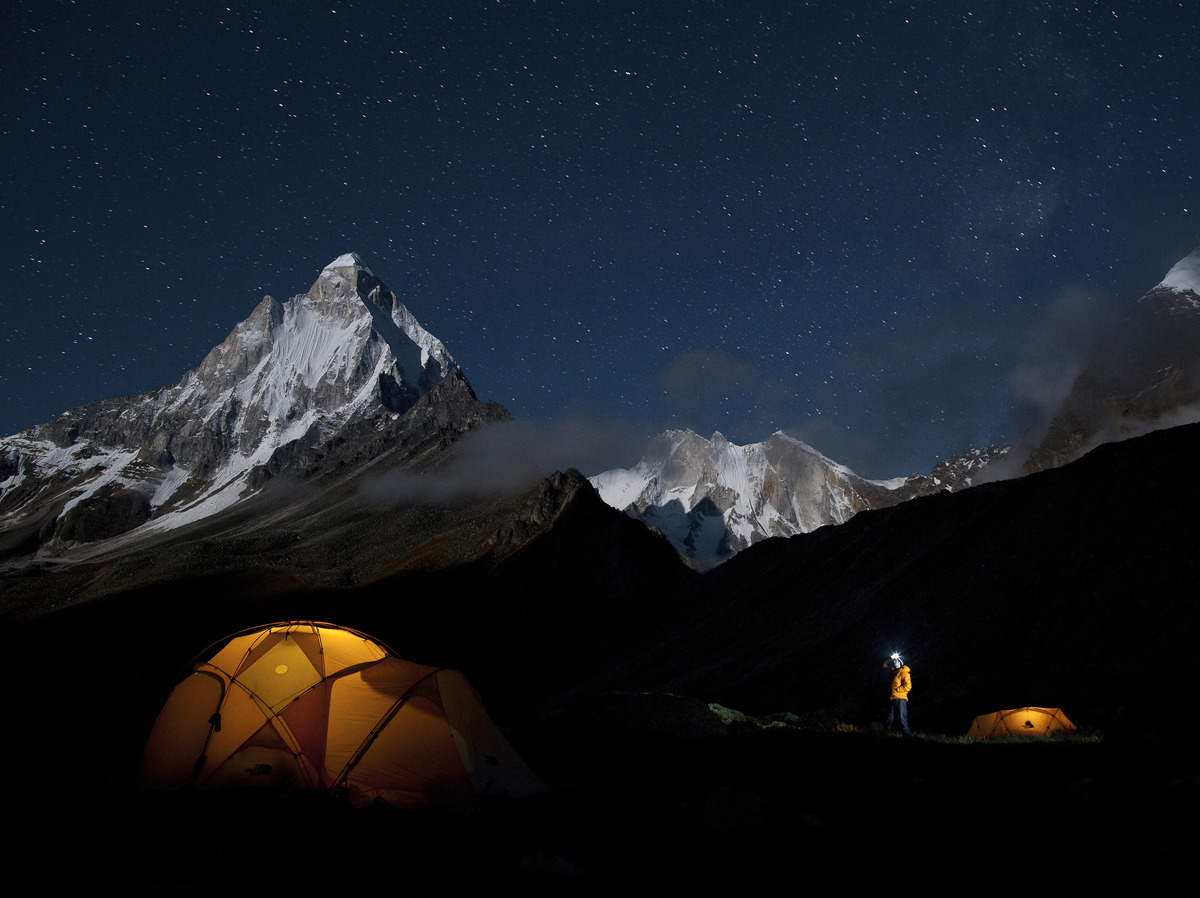 Climbers settle in for the night on Meru Peak.

What's the big deal? Meru Peak, after all, isn't as high as Everest, on which there are still the bodies of 100-plus climbers, among them the legendary Brit George Mallory. But getting to the top of Meru is even more of an ordeal.

Listening to the author of Into Thin Air, Jon Krakauer, describe it while the camera roams the topography, I thought, "It's not meant to be climbed." Krakauer says that for 4,000 of its last 5,500 feet it's "gnarly," but then it gets really nuts, ending in a smooth, vertical, 1,500-foot wall — a "shark fin" — leading to a tip that barely accommodates a human body in the unlikely event one reaches it.

One of the climbers, Jimmy Chin, directed the film with Elizabeth Chai Vasarhelyi, and it's a cunning piece of storytelling. The movie drifts back and forth between the hair-raising treks and the events that led each man to the slopes of Meru.

Rangy, chiseled Conrad Anker is the biggest celebrity of the trio, at least until now. He was actually the guy who, in 1999, working for National Geographic, located the body of Mallory where it had lain for 75 years.

But Anker had two mentors, one a longtime climbing partner, die on expeditions, and though he's as giddy as a child on beginning his ascent, he admits — when he's interviewed at home in Montana — to other feelings. The makers of Meru don't tell you the complicated story behind Anker's family until late in the film, but it adds to our anxiety about his well-being.

The anxieties of the other two are just as palpable: Chin was raised by hard-driving parents who fled repression in China, and he promised his mother when he embarked on a career of risk that he wouldn't die before she did. And Renan Ozturk, an awesomely agile rock-scaler who has the first doubts about their climb, later proceeds while still recovering from near-fatal injuries. He gets back on the horse. And he's one of the cinematographers, too.

That cinematography makes you think there's something supernatural at work. In the end, they're doing what's known as "Himalayan big wall climbing" — straight up a sheer face where every pickax strike can bring down sheets of rock, at temperatures as low as 20 below zero. At one point, the trio bivie (short for bivouack) on the side of Meru with 19,000 feet of air below them. In other words, their tent is vertically pitched — and then comes a four-day storm. I could have done without some of the fisheye lenses Chin selected — but talk about armchair criticism!

The movie is a packed 90 minutes and the familiar critical superlatives don't capture it. Just go to Meru. The movie, I mean, not the climb. It's a peak experience.

In the audio of this story, as in a previous Web version, we refer to the mountain featured in this film as Mount Meru. In fact, it is called Meru Peak.