Accessibility links
Scars Of Katrina Slow To Heal For Mississippi Gulf Coast Media coverage after the storm focused on New Orleans, but the damage was just as bad, and sometimes worse, in Mississippi. Ten years on, slow recovery in places like East Biloxi has left many behind. 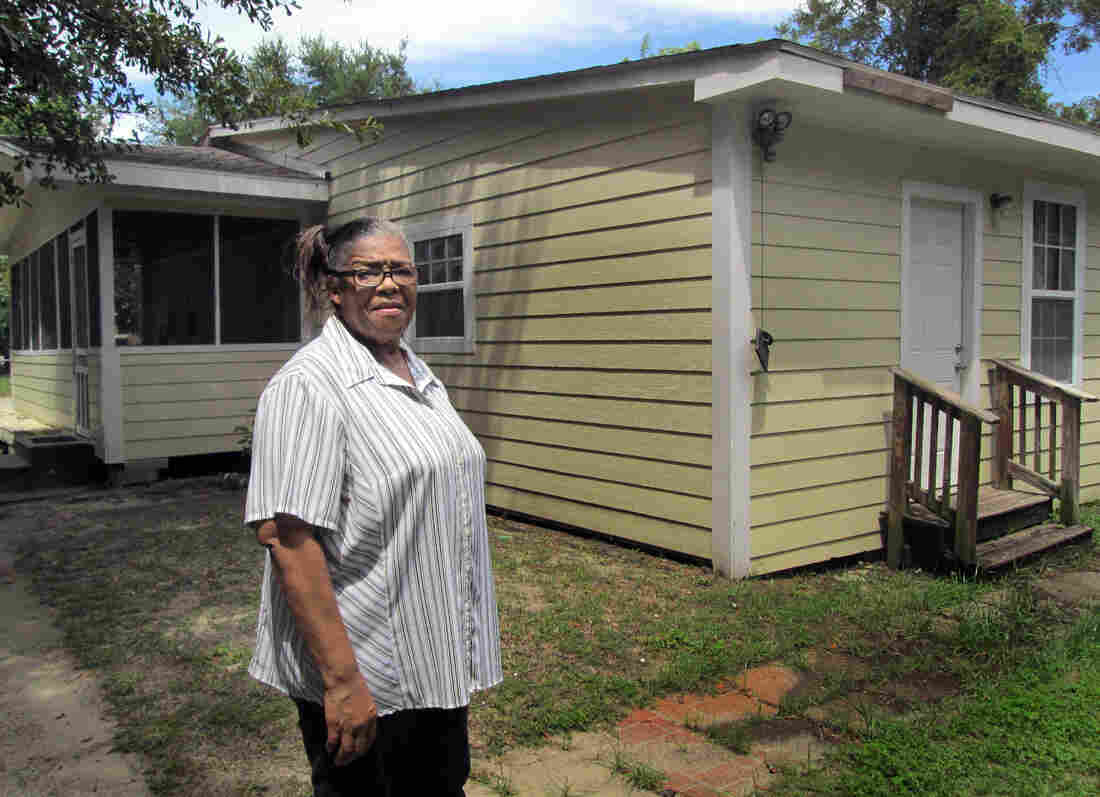 Mississippi resident Ethel Curry stands in front of her East Biloxi home, which was rebuilt with the help of volunteers after Hurricane Katrina. Evelina Burnett/MPB hide caption 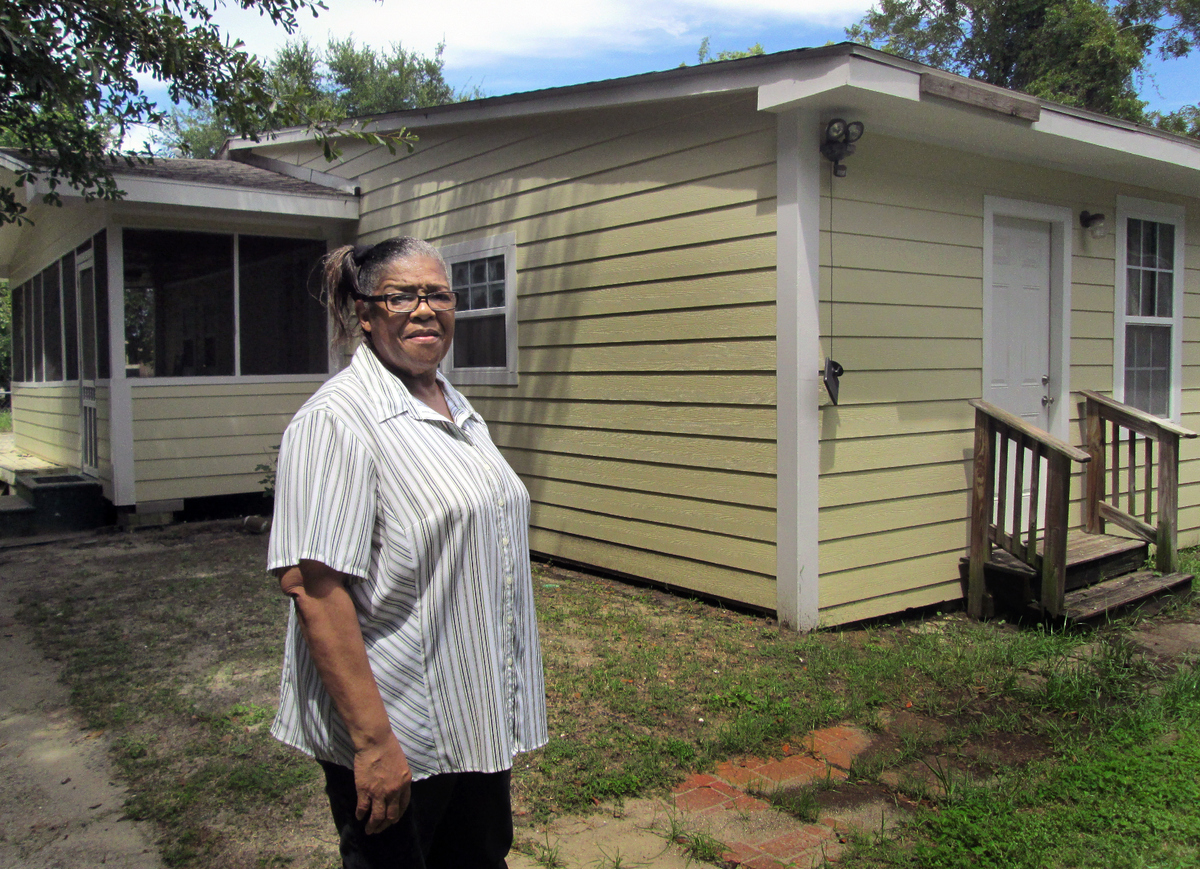 Mississippi resident Ethel Curry stands in front of her East Biloxi home, which was rebuilt with the help of volunteers after Hurricane Katrina.

Ten years ago, Ethel Curry rode out Hurricane Katrina in her upended refrigerator as it floated near the ceiling of her home in East Biloxi, Miss. As it went higher, she used a fan blade to break the ceiling tile.

"The rafters were so small, I had to hold on to each side to keep my head above the water," recalls Curry, who is 70 now. "And I stayed there 5 1/2 hours, until the water went down."

Curry was able to rebuild her home about two years later with the help of volunteers from the TV soap opera Guiding Light. They were among the nearly 1 million volunteers who came to Mississippi after the storm.

But Curry's is the only rebuilt house on her street, and the memory of the rising water remains.

"It's frightening, and so much has changed since then — a lot of landmarks and different things. So I myself don't go very far," she says. "If I have to go over a bridge, it's with someone in my family, because I'm afraid of the bridges because of the water."

After Hurricane Katrina in 2005, most media coverage focused on the impact to New Orleans. The damage was just as bad — and sometimes worse — in coastal Mississippi.

Today the scars of Hurricane Katrina — visible and unseen — continue to haunt the Mississippi Gulf Coast, and in East Biloxi the recovery is still slow 10 years on. There are gap-toothed streets with only driveways marking where houses once stood. This is a low-income, low-lying peninsula that long has been home to the city's working class, its new immigrants and its seafood industry.

"When I look around, a lot of things still haven't changed," says James Crowell, president of the Biloxi branch of the NAACP. "It's a lot cleaner of course — you know, we had quite a bit of debris after Katrina — but when you look at the empty lots and the economic situation here in East Biloxi, it's primarily the same."

Several things have slowed the rebuilding. Crowell says insurance, the cost of which has doubled in some areas, is perhaps the biggest issue. Other hurdles include property claims that are complicated when homes have been passed down informally between generations, and new federal requirements to rebuild at higher elevation to lessen flooding risk.

The storm destroyed or damaged thousands of homes in East Biloxi, splitting up families and fracturing neighborhoods. In the most recent census, the population of 8,000 was less than half pre-storm levels.

Also haunting is what could have been. Carol Burnett of Moore Community House, a nonprofit that has worked in East Biloxi since 1924, says there were three community plans developed after the storm. 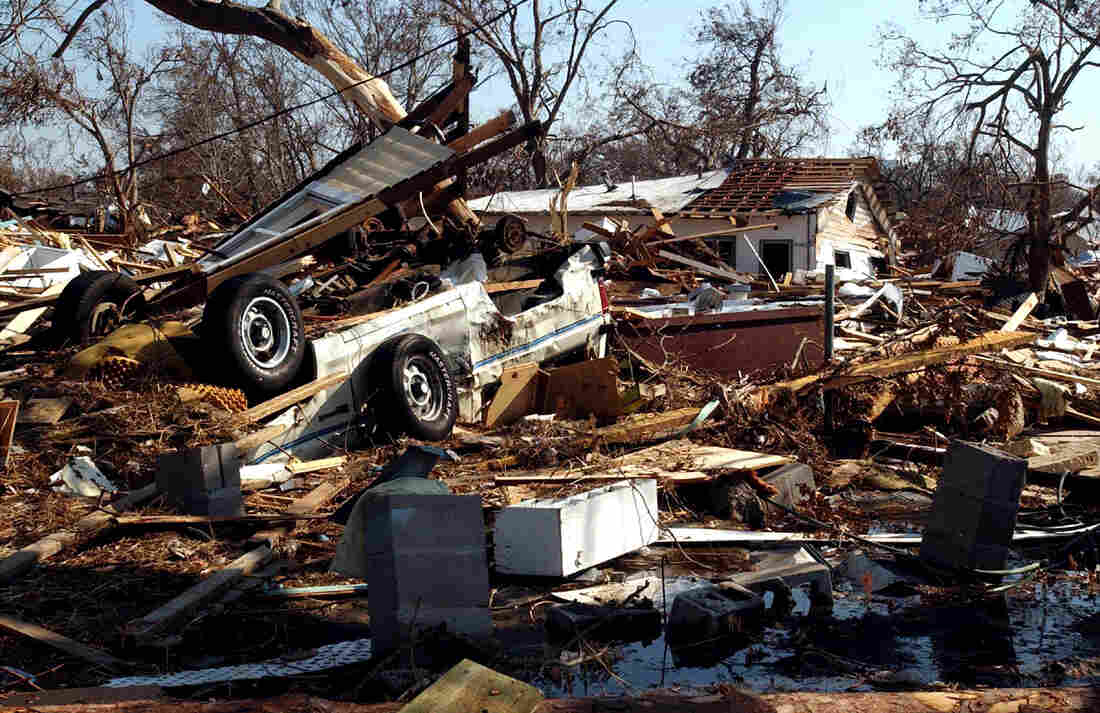 Virtually every structure in East Biloxi, Miss., like these on Howard Avenue, was leveled by the storm surge from Hurricane Katrina in August 2005. Tim Isbell/Biloxi Sun Herald/MCT/Landov hide caption

"With all the hurricane recovery money that was coming to the coast, I thought the coast had an opportunity to make some of that real," Burnett says. "But here we are 10 years later, and the essential economic inequities that existed before Katrina are still here."

There has been some progress since the storm. Hundreds of new homes and public facilities have been built. Moore Community House's new Early Headstart buildings can serve twice as many children as before the storm.

And people haven't given up hope that East Biloxi will thrive. A new community collaborative was formed a few years ago to encourage progress.

"I would hope that in 10 years later," he says, "that this peninsula would be totally different from what you see right now."