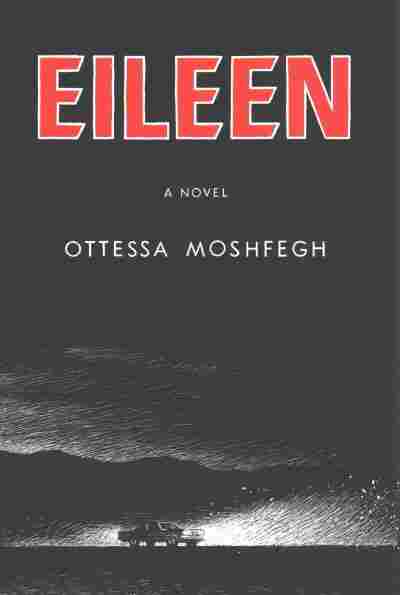 Charmingly disturbing. Delightfully dour. Pleasingly perverse. These are some of the oxymorons that ran through my mind as I read Eileen, Ottessa Moshfegh's intense, flavorful, remarkable new novel. "Funny awful" might be another one. I marveled at myself for enjoying the scenes I was witnessing, and wondered what dark magic the author had employed to make me smile at them.

24-year-old Eileen Dunlop is damaged goods. It is the week before Christmas in 1964, but we won't find any pretty tree, wonderful presents or string of holiday lights in the Dunlop household. She lives with her verbally abusive, gin-drunk father in a blue-collar Boston suburb that Eileen snarkily dubs "X-ville." The two make for a well-suited dysfunctional tag team: He sends her out for his daily bottle; she's glad to do it because she wants him drunk enough to pass out. Eileen's perky sister long ago decamped and now rarely visits. Their alcoholic mother died five years before — her daughter remembers the "frothiness of her graying hair" as the corpse cooled in the bed next to her.

Are we having fun yet? But this is the spell that Moshfegh casts: Dark business, dark, dark business, but told in such a precise manner (the "frothiness" of that hair!) that I was sucked in.

Eileen works as a secretary at Moorehead, a prison for delinquent boys. She nurses sympathy for the incarcerated children, even those who have committed such unspeakable crimes as drowning a younger sibling, burning down the family house or slitting a father's throat. This last is an act to which Eileen can well relate.

Eileen hates almost everything, and is unhappy and angry just about all the time. She expresses rare joy over National Geographic, especially articles depicting "the naïve beliefs of the primitives [...], their blood rites, the human sacrifices, all that needless suffering." She keeps a desiccated field mouse in the glove box of her car as a good luck charm. A "fabulous shoplifter," she deploys a flat, deadpan expression that she calls her "death mask" to keep the curious at bay.

Moshfegh manages to make all this comical, with a touch of tragedy — or is it tragic with a touch of comedy? As a short story writer, she's received acclaim for her inventive, incisive prose (she also previously published a novella, McGlue). She received the Plimpton Discovery Prize from The Paris Review and a coveted Stegner Fellowship at Stanford University. In Eileen, her dark wit gets a thorough, long-form workout.

Eileen could have stepped out of Flannery O'Connor or Shirley Jackson. Wonderfully horrible Humbert Humbert also comes to mind. Eileen may be "unfit for the world," but I was pulling for her.

Eileen's complicated relationship with her own body struck me as the funniest and at the same time saddest element of her story. She pinches her stomach incessantly, hating any bit of flab she detects on her hundred-pound frame. We hear a lot about Eileen's turmoil and disgust over her "nether regions." Typically, she finds her hangover vomit "somewhat wonderful." Her own countenance in the mirror appalls her: "The terrain of my face was heavy with soft, rumbling acne scars blurring whatever delight or madness lay beneath that cold and deadly New England exterior." Yet she is known to kiss her own reflection.

Comes love, the wise old song tells us, nothing can be done. In a stroke of typical Moshfegh genius, sweetness breaks into Eileen's rancid world when a glamorous female psychologist comes on board at Moorehead. Falling in love drives Eileen to what are — for her — new, unheard of excesses of behavior. She takes a shower. She does some jukebox dancing. She attempts to make connection with another human being.

Eileen could have stepped out of Flannery O'Connor or Shirley Jackson. Wonderfully horrible Humbert Humbert also comes to mind. Eileen may be "unfit for the world," but I was pulling for her. I wanted her to escape the prison of life with father, wished that her dreams of fleeing to New York might come true.

Eileen is a coming-of age novel about a formidable, yet flawed young woman. The norms of society disgust and seduce her at the same time. There is a sweetly sinister humor in Moshfegh's prose; I pushed the book on my 20-something daughter, who yelped at the darkness but read to the last page.

Read an excerpt of Eileen