Accessibility links
Aging Tunnels Under Hudson River Threaten To Disrupt Transport, Commerce It's been 105 years since the rail tunnels between Manhattan and New Jersey were built. But even as they show their wear and tear, politicians disagree on who should foot the bill to replace them. 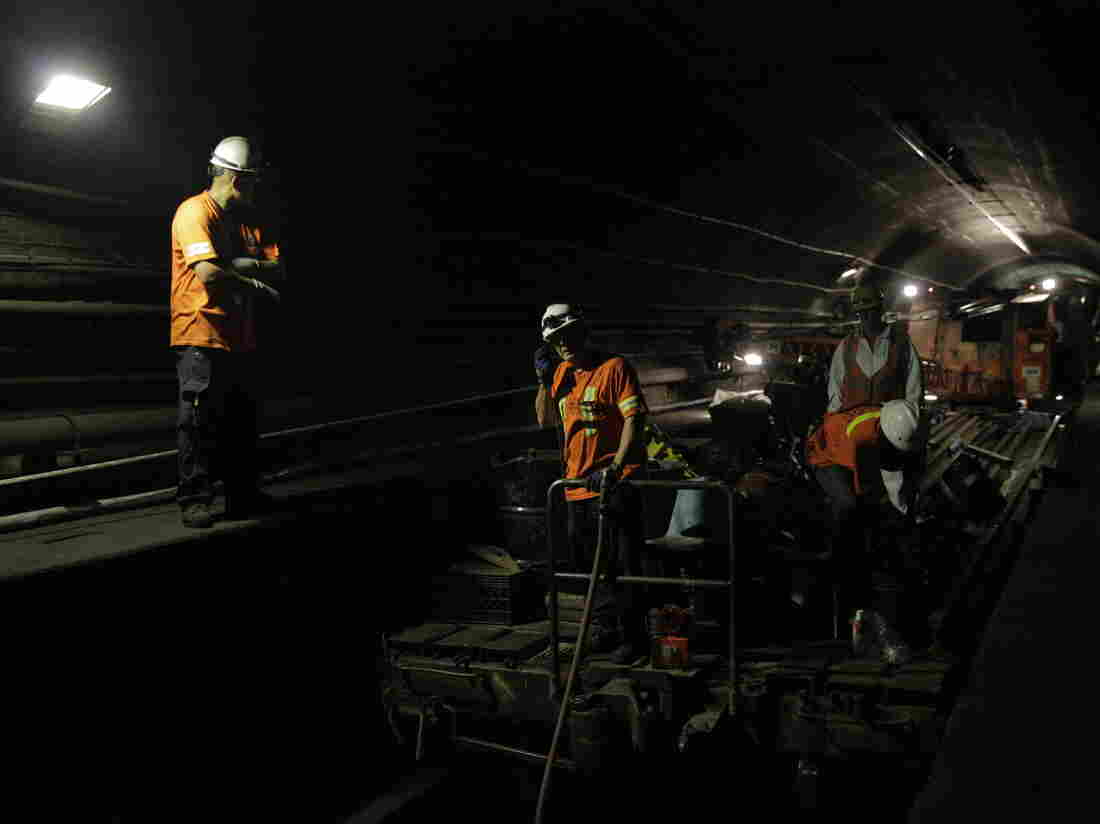 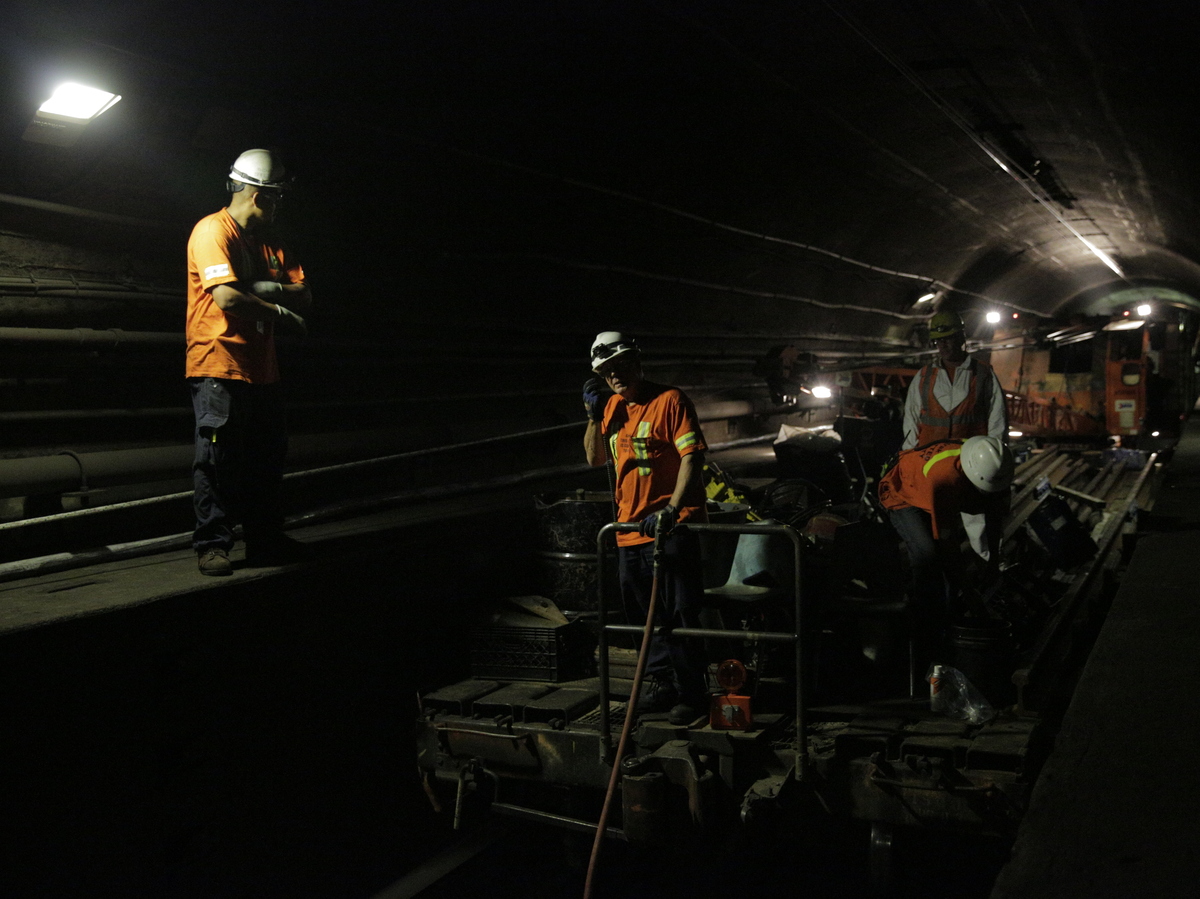 Amtrak workers install new electrical cable in the north tube of the Hudson River tunnels. Amtrak says roughly 200,000 riders use these tunnels on a daily basis.

The workweek got off to a rough start for New Jersey rail commuters recently. A disabled train blocked one of the two rail tunnels under the Hudson River to Penn Station during the Monday morning rush hour.

Thousands of people were left scrambling to find another way into Manhattan.

"This really sucks," said Ira Kaplan of Basking Ridge, N.J. "Much worse than past summers."

Kaplan was among thousands of commuters who took a train to Hoboken, where they waited on sweltering platforms for another train to New York.

Frustrations like these are by no means uncommon. The rail tunnels connecting New York City to New Jersey are more than 100 years old, and they're starting to fall apart. In July, power cable failures in the Hudson River tunnels caused massive delays for days in a row. Commutes that normally take an hour grew to two, even three hours, and high-speed train service between Washington, D.C., and New England slowed to a crawl.

"It's the bottleneck for the entire Northeast corridor," says Tom Wright, the president of the Regional Plan Association in New York.

If one of these tunnels were to fail, Wright says, the economic implications for New Jersey would be dire. But he says the impact would ripple up and down the East Coast — through Boston, New York, Philadelphia, Baltimore and Washington.

"The economies of these cities are all completely connected together," Wright says, "so the travel up and down this corridor is critical to the economy of the United States. And it relies on these train lines under the Hudson River. They carry an enormous number of people every single day."

How enormous is that number? There are roughly 200,000 daily riders, according to Amtrak, which owns and operates the tunnels under the Hudson River. Most of those riders are actually on commuter trains, though, not Amtrak trains. Amtrak, which was founded in 1971, didn't build the tunnels, either: They're 105 years old.

"We have been saying for quite a while that the reliability of the tunnels, because of their age and the lack of ability to really rebuild them, was going to cause more and more problems," says Boardman. "And we're seeing that happen now."

Right now, Boardman says, Amtrak can squeeze 24 trains an hour through the two tracks of the tunnel. But when one of them has to close for repairs, that number drops to just six trains per hour. The tunnels are so busy that Amtrak has to do maintenance work in the middle of the night, when one of the tunnels is closed.

The tunnels under the Hudson River are dimly lit and narrow — just big enough for the trains to fit. The walls are the original concrete, which has worn away in spots to reveal the brickwork underneath.

"For 100-year-old tunnels, they're in pretty good shape," says Bill Mew, a senior engineer with Amtrak who's been working in these tunnels for decades.

When the storm surge from Hurricane Sandy filled these tunnels with saltwater in 2012, they reopened just days later. But ever since, they've been plagued with maintenance problems. This week, Mew says, Amtrak engineers are replacing one 400-foot stretch of an electrical cable that's 15,000 feet long.

But this is just a short-term fix. Rail advocates say what's really needed is a second set of tunnels under the Hudson River. Many New Jersey commuters agree.

"I don't really know what's it going to take," says Susanna Einstein of South Orange, N.J. "I feel like, is it going to be like a tunnel collapse or something? What's going to happen to make people actually ... speed up the process?"

"It's especially frustrating knowing that we've had a solution for years and years," says Philip Schweiger of West Orange. "Be nice not to have to wait for everything to fall apart before we fix it."

There was a plan to add new rail lines under the Hudson River, known as the ARC Tunnel. But that project was cancelled in 2010 by New Jersey Gov. Chris Christie, who said his state was picking up too much of the bill.

Christie now says he supports a tunnel, as long as New York and the federal government pay a fair share.

But now it's the governor of New York, Andrew Cuomo, who seems reluctant to pay for a tunnel — one that Cuomo argues would mostly benefit commuters from New Jersey.

"It's not my tunnel. Why don't you pay for it?" Cuomo said to reporters earlier this month. "There's no moral, legal or ethical reason why the state should be looked at to fund it."

Amtrak has a new plan to build more Hudson River tunnels, known as Gateway. But that project has a price tag of at least $14 billion, and no dedicated funding. Wright, the RPA president, says there's no time to waste.

"Best-case scenario, it's gonna be a dozen years before a new tunnel is built and operational," Wright says. "And the chances that there's going to be a much more significant disruption in service in the next 12 years is close to 100 percent."

In the audio of this story, as in a previous Web version, Tom Wright is misidentified as the director of the Regional Plan Association. He is the president.