Accessibility links
From Quiet Kid To Trash-Talking Titan: Ronda Rousey's Year Speaks For Itself The fighter has won her last three title bouts in under a minute, published a popular memoir and starred in two blockbuster films. All in a year's work for one of the most dominant athletes alive. 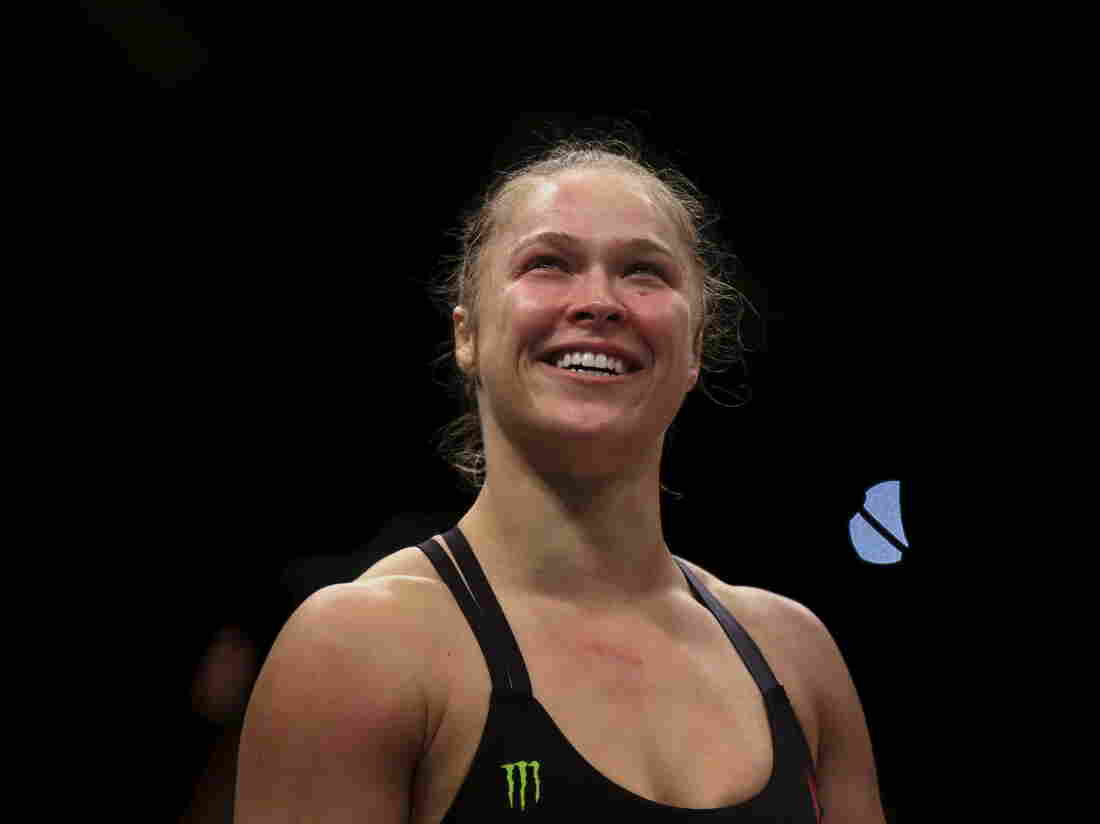 Ronda Rousey celebrates her most recent Ultimate Fighting Championship win on Aug. 1, shortly after knocking out Bethe Correia in just over half a minute. Ricardo Moraes/Reuters/Landov hide caption 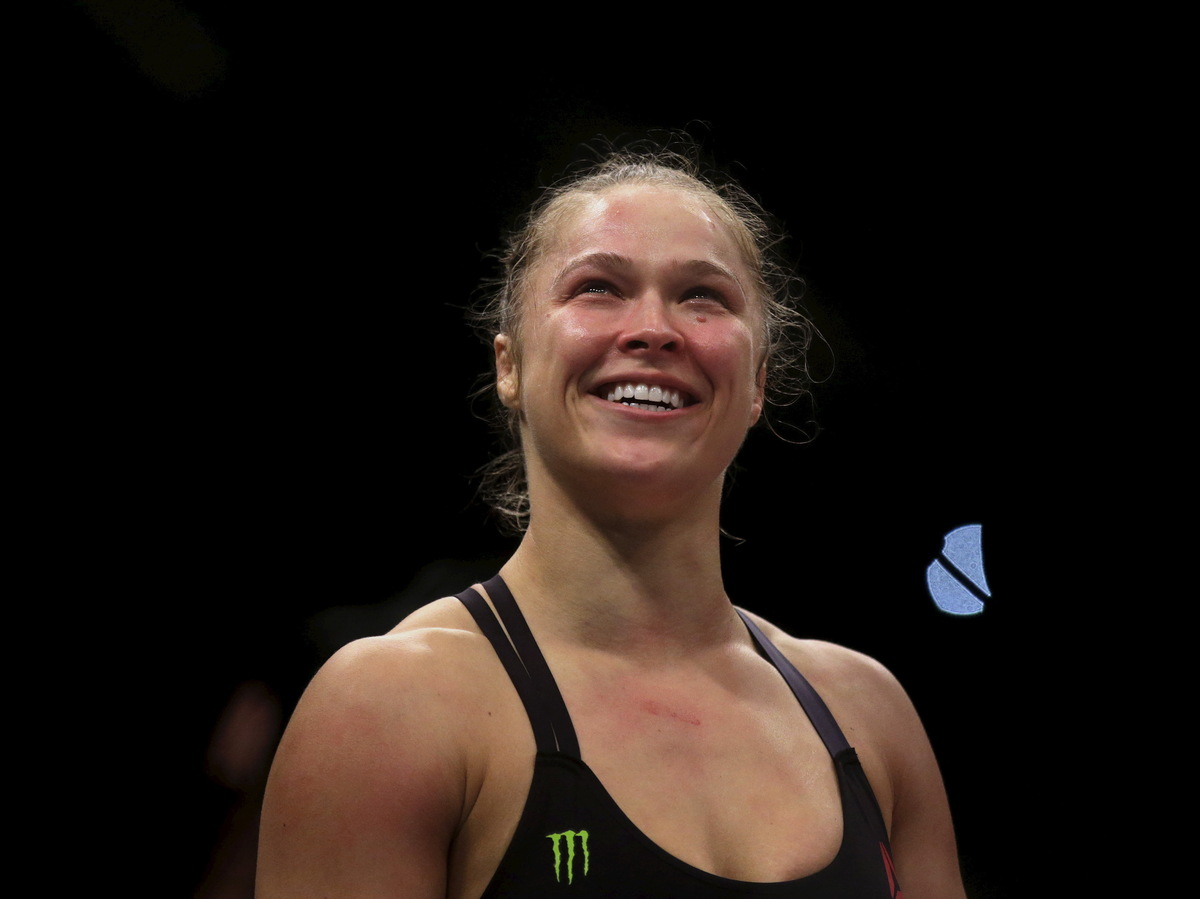 Ronda Rousey celebrates her most recent Ultimate Fighting Championship win on Aug. 1, shortly after knocking out Bethe Correia in just over half a minute.

Clock yourself the next time you tie your shoes. Chances are, in the time it took you to get those shoes laced up, Ronda Rousey would have knocked out her opponent in a typical mixed martial arts match.

Rousey, the reigning women's bantamweight champion in the sport, has held the title since the women's Ultimate Fighting Championship was established in 2012 — more or less to showcase her talent. The most lethal of those talents is the arm bar, a move that she brought over from her days as an Olympian in judo. Today, she continues to use it to her advantage, often taking down fighters in seconds.

Known also for her ice cold stare, Rousey's used to getting booed by the crowd for her trash talk — and loves it, too. Yet Rousey needed speech therapy when she was a child.

"I had a lot of trouble speaking as a kid. I didn't really speak in coherent sentences until I was like 6 years old," she tells NPR's Audie Cornish. Diagnosed with apraxia when she was young, she fell behind in relation to other kids her age. "There was a long time where everybody was very worried, because my sisters were so advanced for their age and I would barely talk."

Even later, she struggled for years to overcome her shyness.

"I was painfully shy for a long time," she says. "I mean, that's something I really had to work my way out of. And I really think it was because, after the 2008 Olympics, I spent a whole year bartending. It was the one thing that really forced me to be just not so scared to start conversations with strangers."

These days, it's her outspokenness and her fearsome reputation that have been nabbing headlines — and screen time. She has appeared in movies like the last of the Fast and Furious franchise and The Expendables 3, in which she was the only female action star on the bill full of men.

Still, though, in the octagon she's never just another name on the card. In fact, she's one of the most dominant athletes alive. 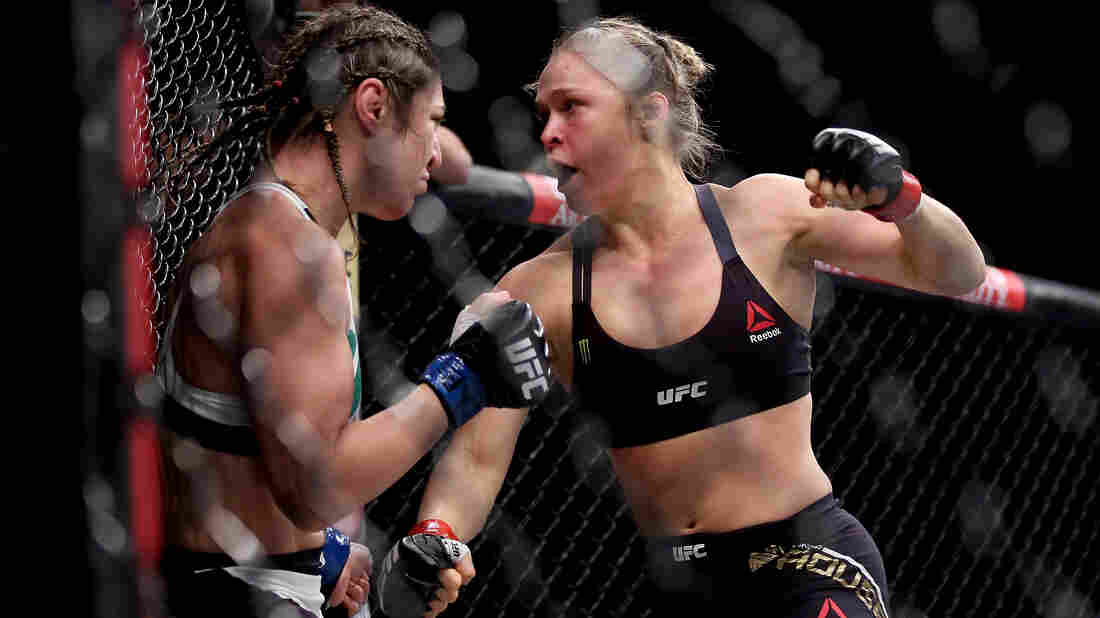 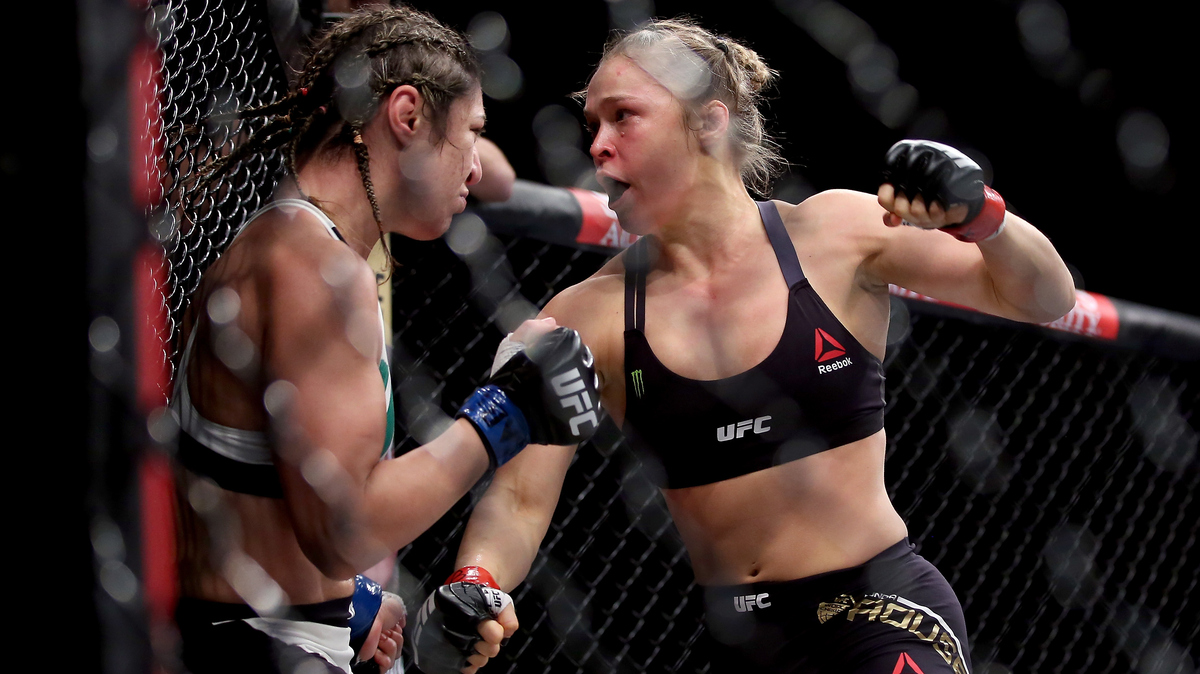 On the fine art of trash-talking

I always thought I was really bad at it, because I could barely hang in there with my sisters and my mom. But then, when I got away from the Olympics, over to professional sports, where I was into entertainment and getting people involved, that's when I really got to find a new means of expression of, like, I get to create this superhero character version of myself.

On the pre-fight comments about Rousey's family from opponent Bethe Correia, whom Rousey eventually defeated in 34 seconds

Well, I'm used to opponents trying to say as many mean things as possible as they can about me. But when it gets to the part where they're saying things that are hurtful to my family, that's when it gets to a point where I feel like I have to make an example out of that person — so people know where the lines are, and where to not cross them. And I don't think anyone's going to be crossing that line ever again after that last fight. ...

The lines are there. I mean, they're a little bit more flexible than, you know, any other workspace environment. But they're still there and they still need to be respected.

On her long-running war of words with Floyd Mayweather, her remarks about his history of domestic violence — and whether she'd ever step into the ring for a fight with him

I don't think it's my duty or anything like that, I don't think I have to do anything, but I'm in a position where I can say something. If I feel like somebody insults me, I don't have to sit there and bow my head and be a good little girl and just take it. I can say something back. And it's actually encouraging that he's in the kind of situation where he feels like he has to respond to me. ...

Honestly, I don't even think that any kind of coed fight would be good for the sport at all. ... Because I don't think there should ever be a situation where everyone gathers around an arena to see a man hit a woman.

On the first time she recalls seeing an MMA fight

I saw Gina Carano fight Julie Kedzie on Showtime, and I thought it was just the most amazing thing — not just seeing how great they were fighting each other, and how great of a fight it was, but seeing the reaction of all the men I was watching that fight with. And where they would speak vulgarly about the ring girls that whole night, when the girl fighters came on, they spoke about them with awe and respect. And I envied them [Carano and Kedzie] in a lot of ways, because I trained with a lot of these guys and the kind of reverence they were giving these girls was something that I never received from them.

On the female fan base for mixed martial arts

Actually, MMA has a — pretty even when it comes to the fan base. I think it's like 60-40 [percent] men/women. It's much more even than people would think.

And I think one reason why women are so drawn to fighting is because it's an instinct that everyone has. It's not an instinct to hit a ball with a bat or to put a ball in a hoop or to kick a ball between two posts. But it is an instinct in every single human being to fight, and everyone has that thought in their mind of what would I do if I was in there? And it's not something that we're taught; it's something that we have in us. It's not a man or woman thing; it's a human thing.

On the physical toll the sport takes on her

Everyone thinks [MMA is] a lot worse than it is, because you'll get a little cut here or there and it'll bleed, it'll look bad, but it's not nearly as bad as, say, boxing when someone's taking 12 rounds of punishment to the head, or judo, where someone's face-planting and they could break their neck or something like that. As long as I keep walking out of the cage without a single bruise on me, I'll be able to fight a lot longer. ...

I say all the time, it's the pretty fighters you gotta look out for, because they're the ones that get hit the least.