Accessibility links
The Survivors' Street: 10 Years Of Life After Katrina NPR first visited Schnell Drive in St. Bernard Parish 10 years ago to speak with the Bordelon family as they rebuilt their home after Katrina's destruction. Unlike many, they're still there today. 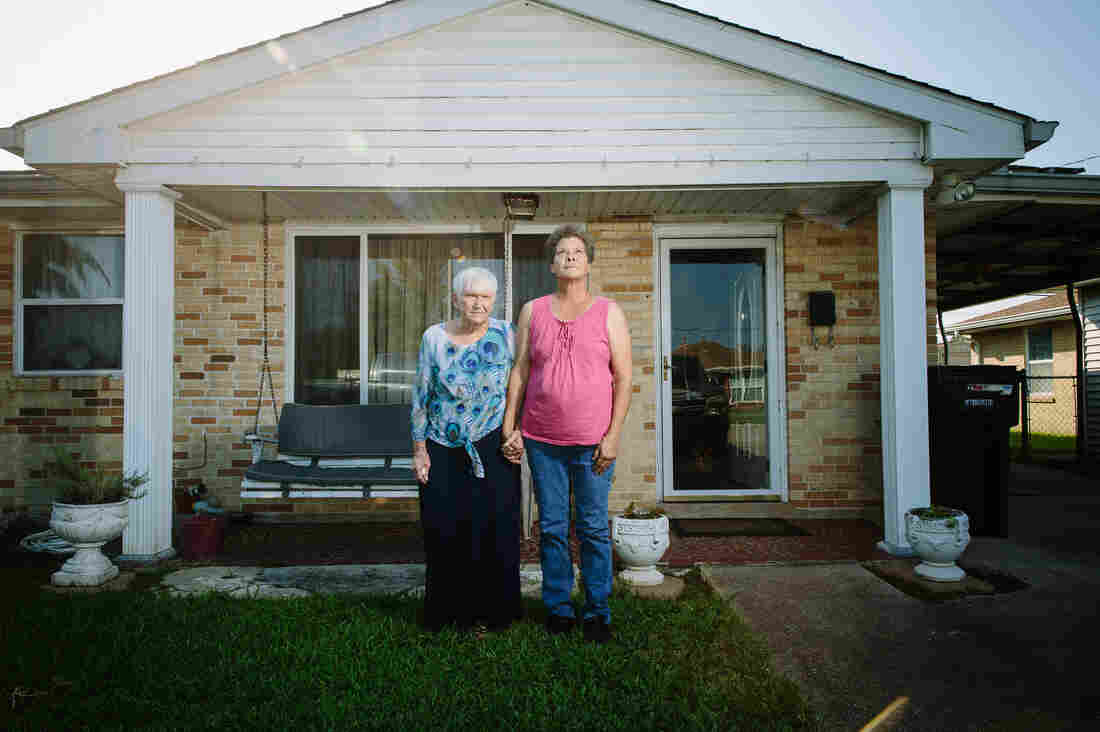 Donna Bordelon (left) and Colleen Bordelon in front of the house where they live on Schnell Drive in Arabi, La. Edmund D. Fountain for NPR hide caption 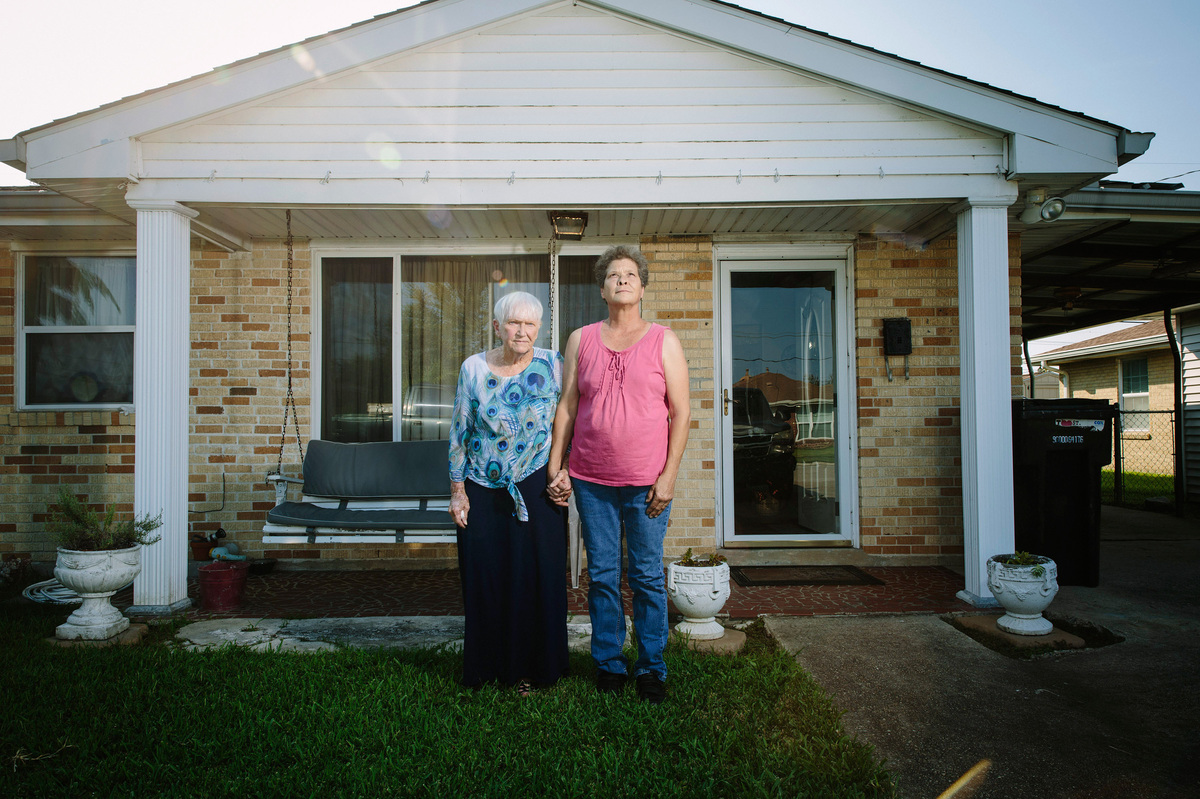 Donna Bordelon (left) and Colleen Bordelon in front of the house where they live on Schnell Drive in Arabi, La.

This is the long story of a short street: Schnell Drive, two blocks of brick homes in Arabi, La., just east of New Orleans in St. Bernard Parish.

When we first visited in the fall of 2005, Donald and Colleen Bordelon were often the only two people on Schnell Drive. They had stayed in their home through the storm and the flood, and through the weeks after when the first floor was still filled with water.

The Bordelons were determined to restore their home. They started working as soon as the water drained away. They continued even as many neighboring brick houses were torn down — even as people talked of turning the entire flood-prone neighborhood into green space. NPR documented their struggles for years afterward.

Bordelons: The Deaths Since Katrina Were Worse Than The Hurricane

Bordelons: The Deaths Since Katrina Were Worse Than The Hurricane

The Bordelons Hang On To Home

The Bordelons Hang on to Home

Today, Colleen Bordelon still lives in the home, joined by her mother-in-law Donna. The population of the surrounding neighborhood has rebounded as some people have returned and newcomers have moved in, building new lives and even new homes amid the remnants of the old.

Staying Through The Struggle

Donald Bordelon grew up in the modest ranch house on Schnell Drive. He was a boy when it flooded during Hurricane Betsy in 1965. The family fled in a boat, and later restored the home, even adding a small second floor. That's where Donald, his wife, Colleen, and, for a time, Donald's parents took refuge from the flooding after Katrina.

The older couple had to evacuate briefly, but Donald and Colleen remained, cooking food on a burner and keeping a boat tied up by a second-floor window. They remained after the water receded, in a neighborhood coated in silt — "potato-chip kind of mud," as Colleen described it, huge flakes of drying earth.

Slowly the grass re-emerged; slowly the Bordelons restored their home. Their determination inspired NPR listeners through a series of stories; they had a way of laughing as well as crying, sometimes in the same sentence.

The renovation was nearly complete in 2010 when Donald abruptly died in bed. By the time of our visit in 2015, all the other men of the immediate family had died: Donald's father, brother and son. Colleen now lives with her mother-in-law, Donna, in the restored house that the men had been so determined to save. 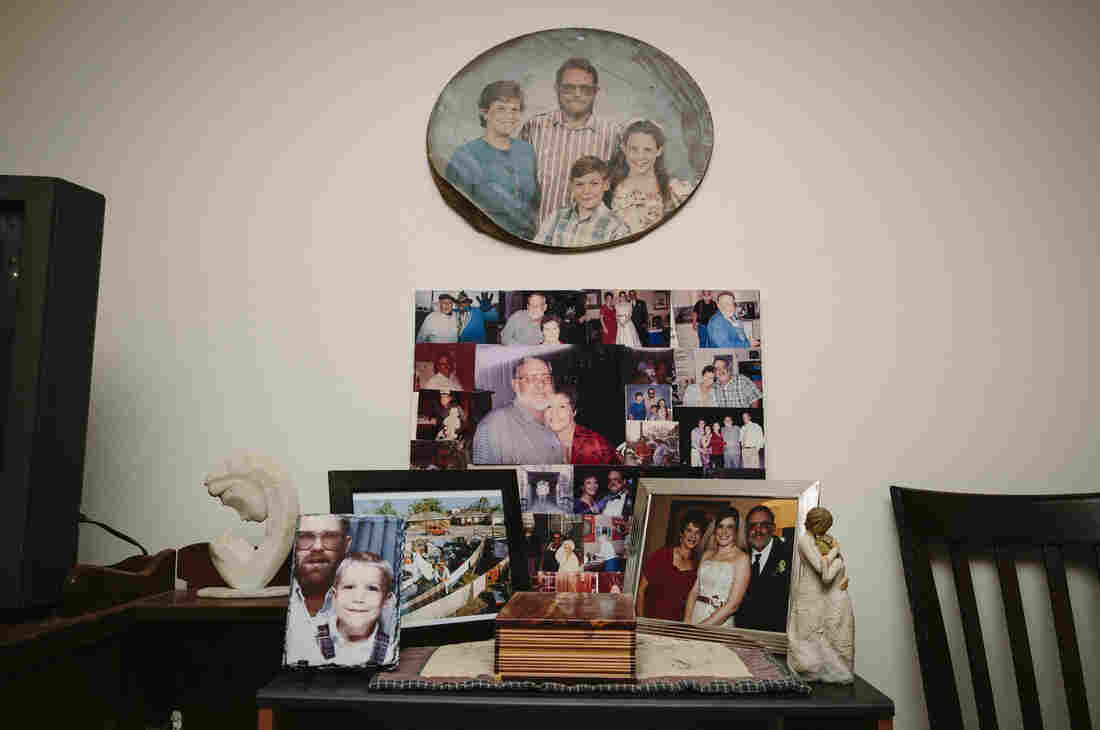 We took a short drive to the mausoleum where the men are interred, driving past the occasional house, with extra-wide green lawns between. Some of the streets brought to mind a mouth missing many of its teeth.

"All this was houses along here," Colleen said. "Wherever you see, like, an empty spot? It was a house."

The Bordelons live amid a small cluster of houses of people who returned to Schnell Drive. Just up the street, for example, is Ruth Nunez, who had her old house torn down and replaced. The new home is on stilts, with the space underneath used as a garage.

Ruth Nunez (left) lived in a brick home on Schnell Drive in Arabi, La., prior to Katrina. After the storm, she rebuilt and raised the house. Edmund D. Fountain for NPR hide caption

"I wanted a 10-foot porch," Ruth told us, and from that deep, shaded porch with a white railing, we had a view up and down Schnell.

From her vantage, Ruth was able to pick out signs of change. Before the storm, 80 to 90 percent of the street's residents were elderly, she said.

"Since Katrina," she said, "we have children all up and down the street."

An ice cream truck passed as we talked.

One of the old ranch houses on Schnell now belongs to the Depaula family. We found Jose and his son Igor outside, repairing a red pickup truck.

They told us they're immigrants from Brazil. They had once lived in Boston, but moved to the New Orleans area after Katrina in search of construction work. Both adults in the family work in construction; the mother, Francisca, installed the new tile floors inside their modest home. 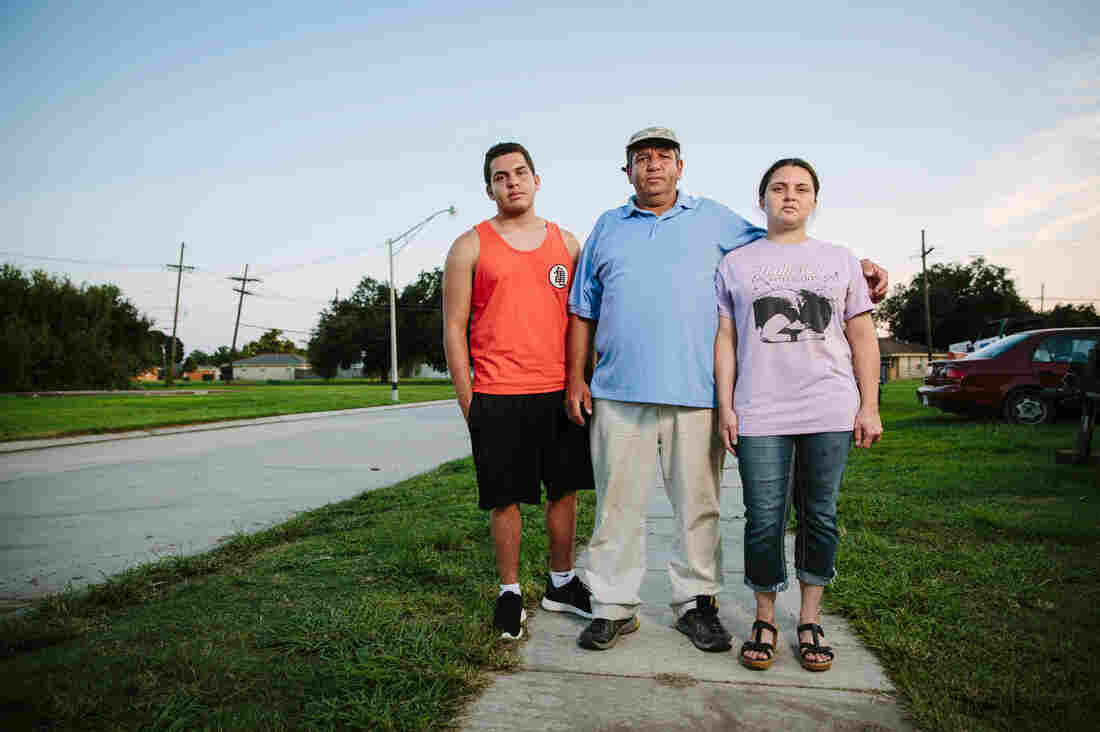 The Depaulas' story is not unique.

"You see that big house over there? That's one of our friends, Johnny — he's from Brazil, too," said Jose. Another house also flies a Brazilian flag, and another is home to "people from our church," which holds services in Portuguese.

At the time of Katrina, St. Bernard Parish was an overwhelmingly white parish of 71,000. In the years immediately after the storm, less than half the population remained. But St. Bernard is growing again — it's back up to about 44,000 residents — and it's more diverse than it used to be.

Jose considers the area "paradise" — more tolerant than other parts of New Orleans or the country at large.

Entrepreneurs In The Wreckage

Schnell Drive has attracted a number of people investing in new lives — among them, Raymond Gaspard and Tanya McCrory. Their house stands out because of the boat and the jet plane they keep parked across the street. (On closer examination, the jet is a toy, more like a golf cart.)

"Everything's for sale!" Tanya called out when she spotted us eyeing the plane. Within a moment she had produced a jar of honey, which the family harvests from beehives on their property and sells for $5.

Raymond and Tanya are not from Schnell Drive, and the story of how they got here is the story of Katrina. They say they met just three weeks before the storm. 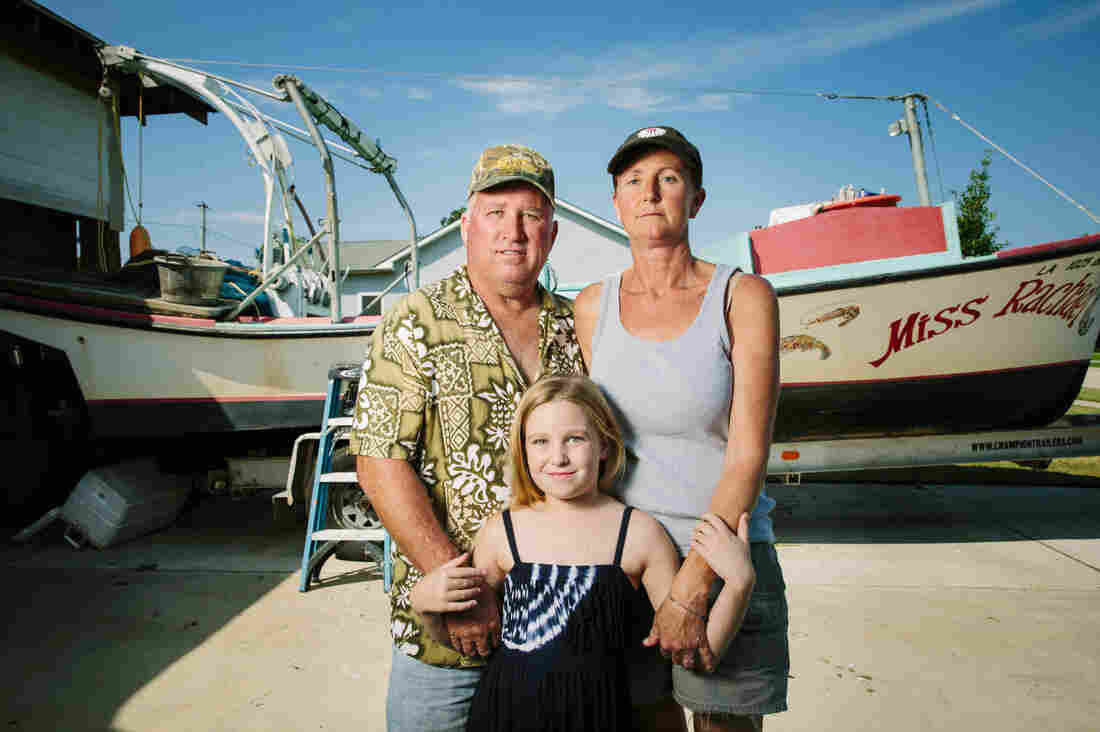 Flooding destroyed Raymond's house in New Orleans, and his boat disappeared — though it later turned up on a city street.

In the aftermath, Raymond found work with a railroad, removing trees from the tracks. Tanya signed on with a catering crew serving utility workers. Raymond later spent years renting out his boat, taking scientists out on the water after the BP oil spill.

Eventually the couple found vacant lots on Schnell Drive where ruined houses had been torn down.

They built a new white house, with architectural frills reminiscent of an older New Orleans style. They set up their beehives, and got a beekeeping suit for their daughter, who's now 8 years old.

They are mindful of the lives that were lived on Schnell before they ever knew it. 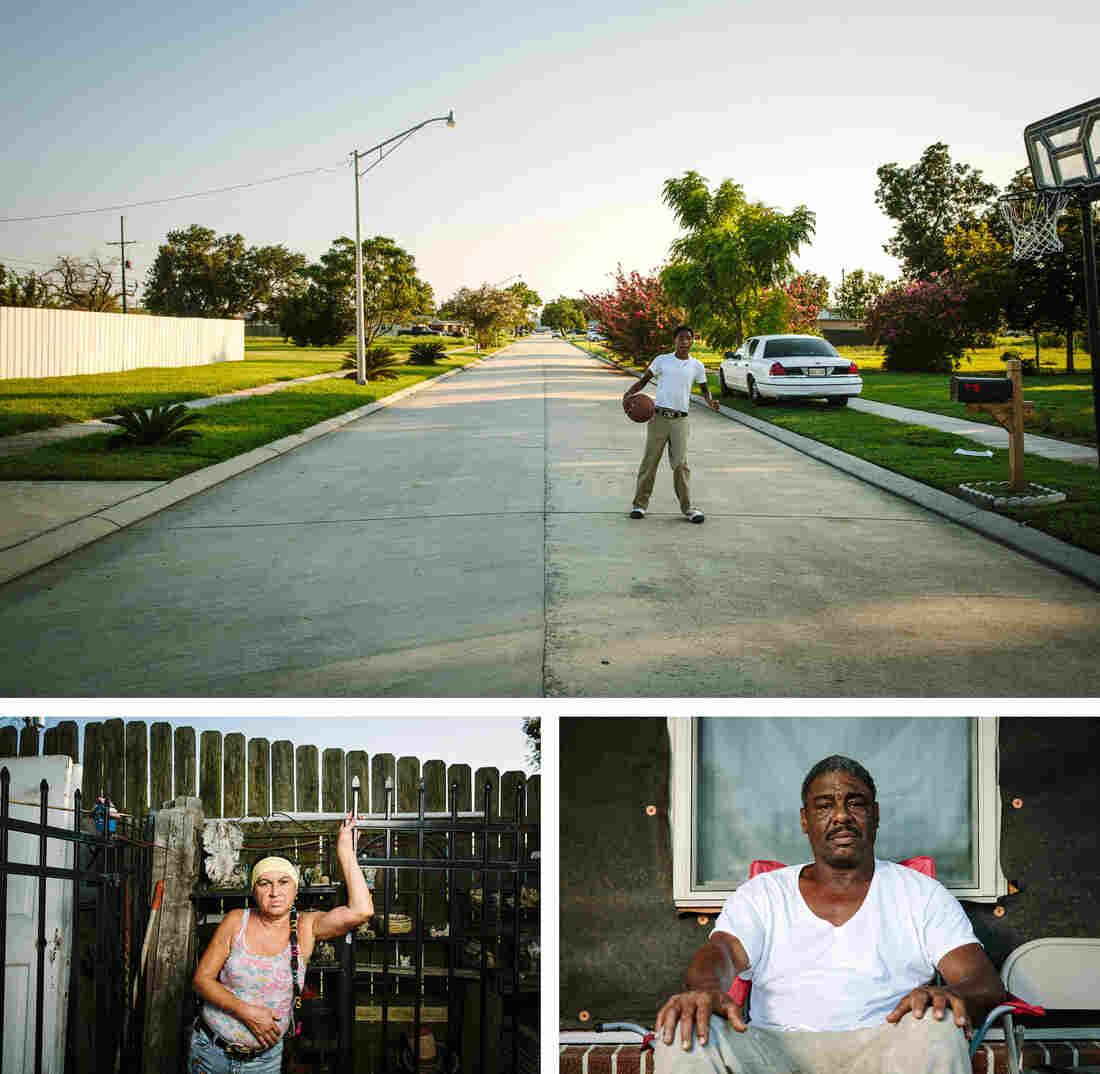 Ronnie Landry, 14, plays basketball in front of his home on Schnell Drive. He and his father, Wilbert Landry, bottom right, moved here from the 9th Ward of New Orleans in 2014. Noney Deffes, bottom left, is a longtime Schnell Drive resident who survived the flood in a neighbor's attic, then lived out of her recreational vehicle before returning to her home. Edmund D. Fountain for NPR hide caption 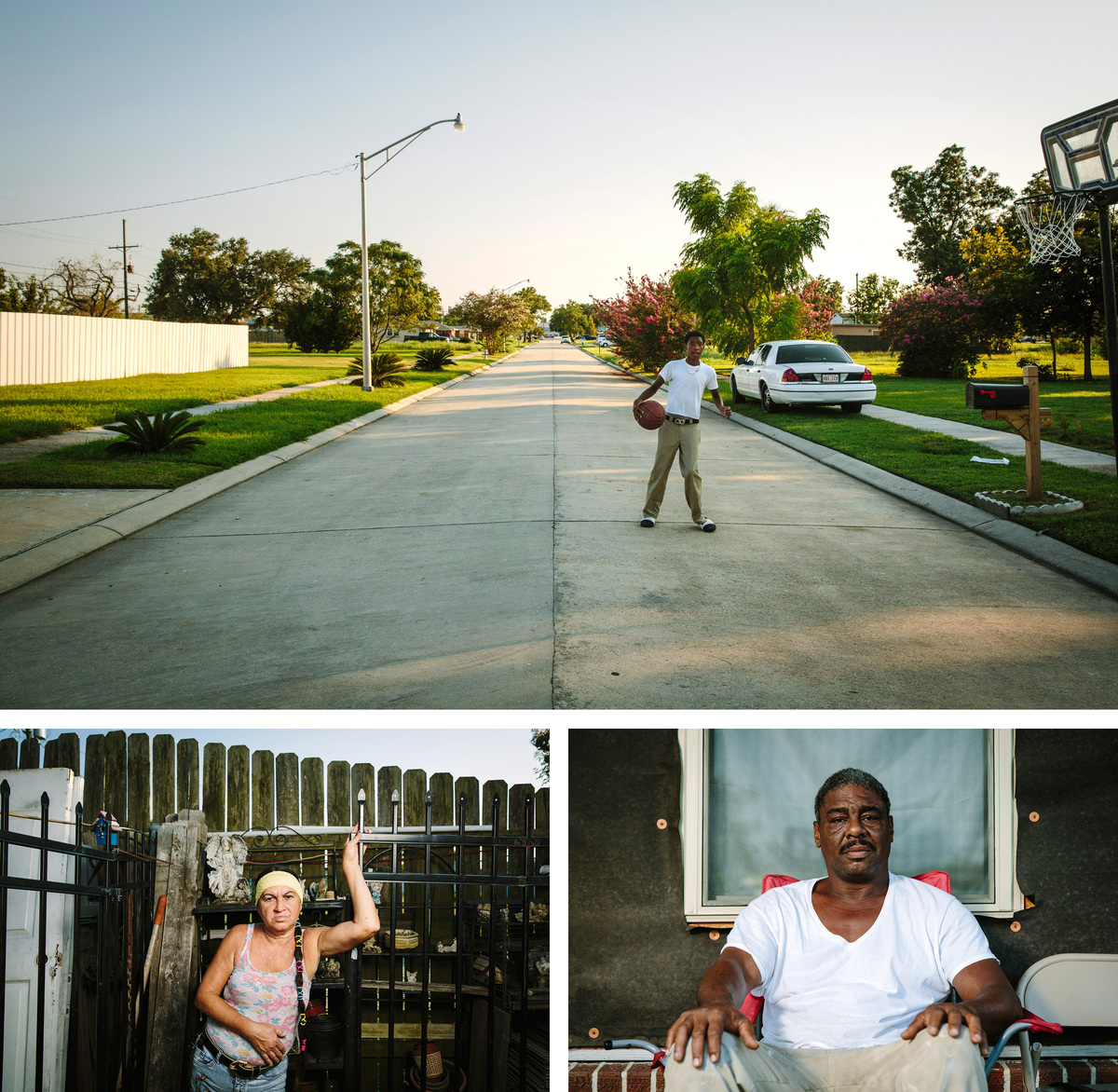 Ronnie Landry, 14, plays basketball in front of his home on Schnell Drive. He and his father, Wilbert Landry, bottom right, moved here from the 9th Ward of New Orleans in 2014. Noney Deffes, bottom left, is a longtime Schnell Drive resident who survived the flood in a neighbor's attic, then lived out of her recreational vehicle before returning to her home.

"I have enough photos of this area, after Katrina," said Raymond, "I said I was going to write a book of The Houses of Arabi."

He spread his photos out on the kitchen island. We saw homes wrenched off their foundations, and a car resting atop a somehow intact chain-link fence.

Raymond knows that if a great flood came again, his new house, too, could be ruined. And water was on his mind; the couple talked about the Mississippi River levels as we left.

This conversation was like nearly all our interviews on Schnell Drive: People had so much to say, it was hard to find a stopping point. Even after we departed, Raymond left us a voicemail.

"I failed to mention to y'all that Katrina was actually a blessing to me," he said. "It actually got me over the hump, from being in debt. I don't owe anything anymore."

He paid his debts with flood insurance from his old, ruined house. The money he made clearing trees from the rails helped build this new one.

Given time, he's come to believe that the disasters of 2005 finally led him to moments of grace. 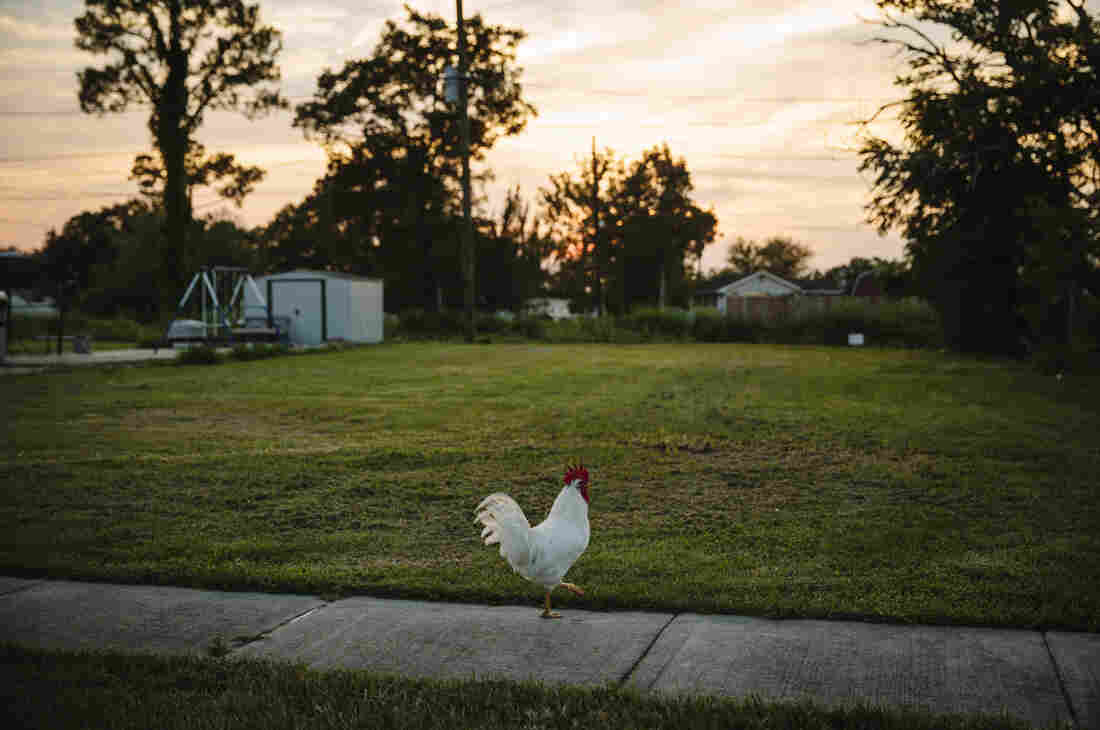 A chicken meanders on the sidewalk on Schnell Drive in Arabi, La. Edmund D. Fountain for NPR hide caption