Accessibility links
Making Sense Of A Tragedy, One Narrator At A Time June Reid has lost everyone she loves in one horrifying moment, but she's not the only one grieving. Bill Clegg's new novel tells of June's loss through the voices of those who know and encounter her.

Making Sense Of A Tragedy, One Narrator At A Time

Making Sense Of A Tragedy, One Narrator At A Time 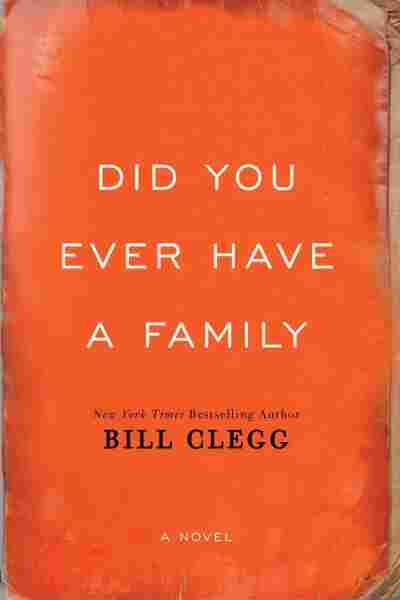 Did You Ever Have a Family

Title
Did You Ever Have a Family
Author
Bill Clegg

There will come a point while reading Did You Ever Have A Family, the debut novel by agent and memoirist Bill Clegg, that you will want to put it down. To leave it aside for shinier, prettier, less complicated things.

You'll be overwhelmed by the number of characters — all the names and connections to other characters, their jobs and families. You'll feel trapped in the small-town claustrophobia that makes it feel, in the early going, like everyone lives together in one big house, knows everyone else's business, despises everyone for reasons that hum with live-wire malice just below the surface of their words, and loves, with perfect, bitter patience, only those closest to them.

The outsize tragedy which burns through the first pages of the story might throw you: on the night before June Reid's daughter's wedding, a gas leak and an explosion kill that daughter, Lolly, her husband-to-be, June's ex-husband and her much younger boyfriend, Luke. It kills, in effect, everyone that June Reid loves. Destroys her home, her clothes, everything she has ever owned. Which destroys her, leaving her hollow and empty and, in short order, in a car with nothing but the clothes on her back and an ATM card, driving west, desperately trying to outpace her own grief and horror.

The first chapters, the hot, hard fall into tragedy and the lives of those affected by it (which, in this town, is pretty much everyone) is a lot to take in. It's confusing and terrible and it sometimes feels like there's no room between the words to take a breath.

But you should stick with it because there will come a point where you'll suddenly find your footing. Where (maybe on the road with June, or in the story of Luke's mother) the whole delicate origami construction of interlocking stories that Clegg is building will blossom outward and you'll see it for the first time as the whole thing that it is — this spindly web of connection, this sticky, terrible, comforting, fully realized community of small, damaged and ordinary people all brought together by a moment that no one can understand.

It happened for me twice. The first time was very early, during the soliloquy of the florist, Edith, whose connection to the events is tenuous and fleeting. She was hired to put daisies in jelly jars for the reception. Fifty or so jars, a couple hundred daisies. Edith hated the daisies, ("They always struck me as bright weeds more than actual flowers.") and thought them unworthy of a wedding. But she'd collected them anyway. And then, the explosion. All that death. And the daisies, every single one of them, found their way into funeral arrangements. "Even when no one asked for them — and let's face it, most did not — I still found a way to make them work. No one ever accused me of being a soft touch, but when something like what happened at June Reid's that morning happens, you feel right away like the smallest, weakest person in the world. That nothing you do could possibly matter. That nothing matters."

There was something so perfectly realized about that moment — this making use of castoff things. Some sense of the interconnectedness of this small town where more than a hundred funeral arrangements were required, and that all of them came from Edith, and that Edith was both sensible (recycling those flowers that would never end up in their jelly jars) and so hurt by the damage done to people she hardly knew.

Clegg gives every chapter over to a new narrator. Some are intimately connected, some just bystanders. A few, like June, repeat frequently. Others, like Edith, speak their piece and go silent. Edith's story kept me going until June reached the west coast, found herself at a small, oceanside motel that Lolly had once stayed at and loved, and Clegg gave the telling over to the lesbian couple who ran it.

They — so disconnected from everything, so absent from the central tragedy — allow June to check in under a false name, with no ID. She pays cash, stays for months. And like entomologists fixated by some unusual species trapped under glass, Rebecca and Kelly observe and try to make sense of the mystery of June (who they know as Jane.) Too polite to ask outright, they glean tiny details and worry over her. They become the lens through which we, as readers, can see June clearly when, previously, we have only experienced her story from inside the prism of her own shattering grief.

In trying to tell the faceted story of a single moment as seen by a hundred different eyes, Clegg has attempted something daring. And the wonder of it is how often his experiment succeeds — and how strange the view of a terrible thing can be depending on the angle from which you view it.