Accessibility links
'I'm Not Scared Of Learning': FKA Twigs On Submission And Control A deft career pivot turned the British artist from a backup dancer for pop videos into a multimedia auteur, with a hand in nearly every aspect of her music career. She speaks with NPR's Scott Simon. 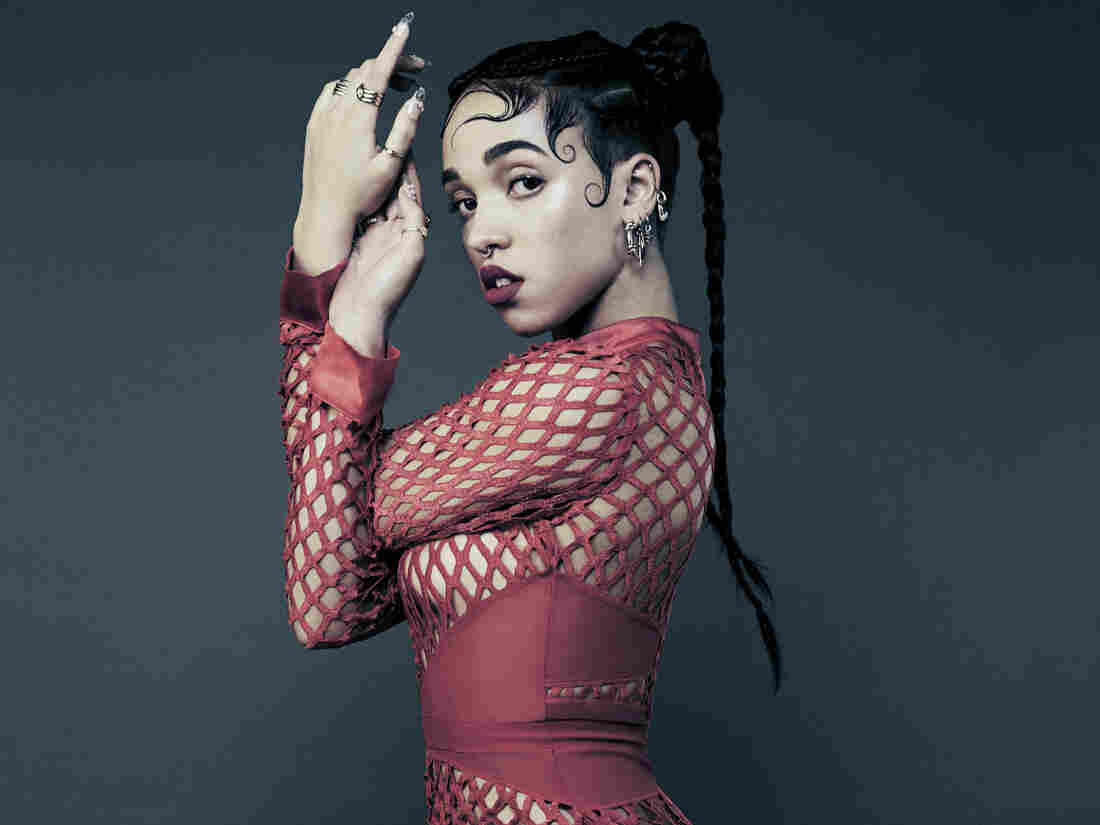 FKA twigs' new EP is called M3LL155X (pronounced "Melissa"). It follows a breakthrough year in which her debut album, LP1, was nominated for the Mercury Prize. Dominic Sheldon/Courtesy of the artist hide caption 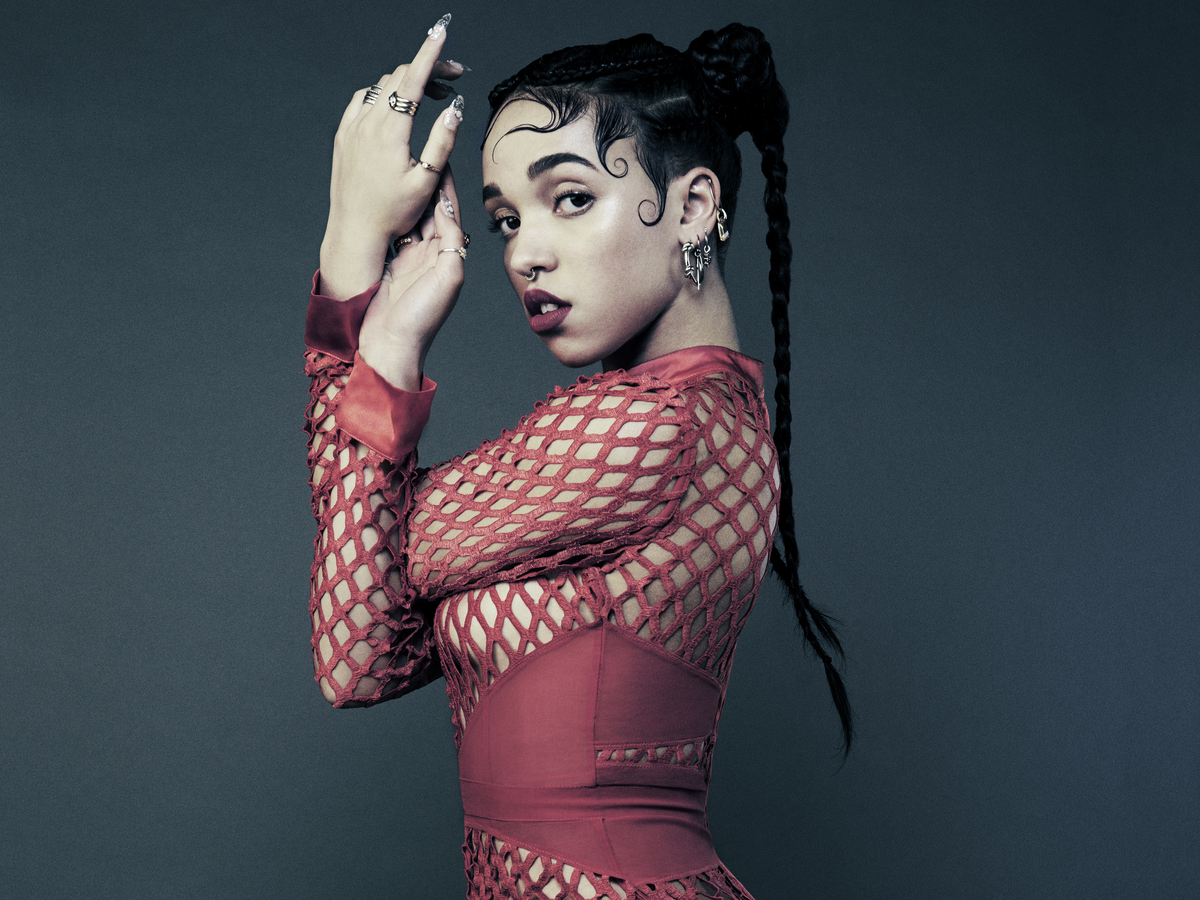 FKA twigs' new EP is called M3LL155X (pronounced "Melissa"). It follows a breakthrough year in which her debut album, LP1, was nominated for the Mercury Prize.

Dominic Sheldon/Courtesy of the artist

FKA twigs, the singer and producer, left home at the age of 17 to become a dancer. She spent years dancing alongside pop stars in big-budget video before she realized she really wanted to make music – and now, she is. Her songs are a blend of electronic and R&B, with threads of punk and even choral elements. Her debut album, LP1, was nominated for the Mercury Prize last year, and this month, she's released a brand-new EP called M3LL155X. (That's pronounced "Melissa.")

FKA twigs joined NPR's Scott Simon to discuss making her own entertainment as a child, and how her years as a background figure pushed her to forge a music career of which she could control every aspect — including some old missteps. Hear the radio version at the audio link, and read more of their conversation below.

Scott Simon: You grew up in rural England; there's a quote I love where you said the hardest part of the day was if you got stuck behind a tractor on the way to school. So what did you listen to growing up? What did you read? What did you see?

FKA twigs: I think I've always been somebody who's lived in my head. I'm a huge daydreamer, so it's more that I would just make up stories in my mind, and make up games. When I was a kid, I had an imaginary kangaroo — and when I got a bit older, I shut him in my wardrobe and he didn't come out again. I started to go to dance class, and then I'd spend my time after school making up dances and dressing up. But I think that's the thing about the country: There isn't that much to do, so you're really encouraged, and forced in a way, to use your imagination to make games.

My early years of ... [childhood] were pretty close to perfect; I couldn't really have wanted for much more. You've got the outdoors and you've got nature, and you don't have the threat of a big city. My mom was never worried about me going outside and playing in the street. In many ways, I was allowed a lot of freedom, which allowed for a lot of creative freedom as well.

Your mother was a dance teacher.

Yes, she was a salsa dance teacher. My favorite game when I was a kid was "pretend orchestra," where me and my friends would be in a band and make up the sounds of the orchestra, but it would all be out of tune. So I was the conductor — or, I loved my imaginary violin as well — and you would make drum sounds and saxophone sounds and piano sounds, but just with mouths.

Listening to a song like "Figure 8," I find it a little hard to understand how someone with that extraordinary voice could be dancing behind people and not singing.

I don't know, I was paying my dues — and I learned so much. Maybe I wouldn't be able to direct my own videos if I hadn't have spent hours on set, just waiting for the artist to get ready. I would just spend those hours learning what each person did on set, which, you know, was invaluable, really.

You choreograph and direct your own videos, right?

I wouldn't really say I choreograph. I love movement. I work a lot with my best friend, Aaron Sillis, and he does a lot of choreography for me. But yeah, I direct my own videos, and all the concepts are my own.

So do people miss a lot if they just listen?

No, I don't think so. I just think everything's open to interpretation, and through the use of a visual, you can really explain how you want it to come across. So say, for example, a song like "I'm Your Doll." If you take the lyrics, it sounds a certain way: "Wind me up, I'm your doll / Dress me up, I'm your doll / Love me rough, I'm your doll." But actually, when you watch the video, it has a completely different undertone, which adds just another layer of questions and intellect and answers.

You wrote that song years ago, as a teenager. How do you feel about it now?

Well, now I feel good about it because I've taken it to a place that I can feel comfortable with. I think when I wrote this song, I didn't really understand what I was writing. I was a 19-year old girl singing, "Love me rough." I was young, I was inexperienced, I'd never been in love, I'd barely had a boyfriend — but I felt that if I wrote that song, maybe I'd get a demo deal, or maybe a producer would want to work with me, or maybe I could get a manager.

So when I heard the song a few years ago ... and I thought, OK, I want to reinterpret that into a place that I can digest now, a place that I feel comfortable with. And now it has a completely different meaning: It's dark, it's twisted, it's sexy, and there's this undertone of power. Even though the lyrics are incredibly submissive, in a way, I feel like I'm in control of my submission — and that makes me feel good about myself, rather than making me feel bad about the message that I'm sending out.

I don't think I've interviewed a musician who says, "I like being categorized," or, "I like genres." But I gather you particularly don't like references to your music as "alt-R&B. "

I just don't really understand what it means. Like if I said to you, "My favorite color is 'alt-blue' ..."

[Laughing] All right, I get your point.

I think R&B's great: I've grown up listening to R&B, I listen to R&B now. I think it's even, like, disrespectful to R&B to put an "alt" to it. And as a new artist that was experimenting, a lot of my references came from German electronic punk music, or classical references. So it was sort of, "OK, I don't mind being in a box — but don't put me in a box in which nobody knows what that box is."

I want to make a little shift and talk about the full-length album you released last year, LP1. There's a song called "Video Girl" where you sing, "Was she the girl that's from the video? You lie and you lie and you lie." What brought that about?

Well, I used to be the girl in the video. It was just me being honest about my frustration with, maybe, people recognizing me in the street for something that I didn't feel really passionately about, or I didn't feel like I had any control over — so I would always lie about it. When I was doing dancing, it was just a means to an end. I really looked at it like a day job: I'd go in, I'd turn up on time, I'd dance as hard as I could, but when I went home, I clocked off.

What would you like people who find your music to feel?

Honest, I think? I want people to see that I'm being really honest, and 100-percent just doing me all the time, and everything that I've put out, I've made it: I've been involved in the production, I've written it, I've come up with the concept of the video, I've picked who's going to be in it, everything down to the glove the dancer on the right is wearing, you know? I'm so involved in every single thing I do. Also, I want to learn; I'm not scared of learning in front of an audience. That's what I'd like people to take away — to see that I'm making something that's honest, and see that I want to get better, and just to be able to grow with me on that journey.