Accessibility links
In Lebanon, Calls For More Protests As Police Push Back Demonstrators Bars and restaurants in Beirut closed Saturday in solidarity with anti-government protests that have grown over the last week. 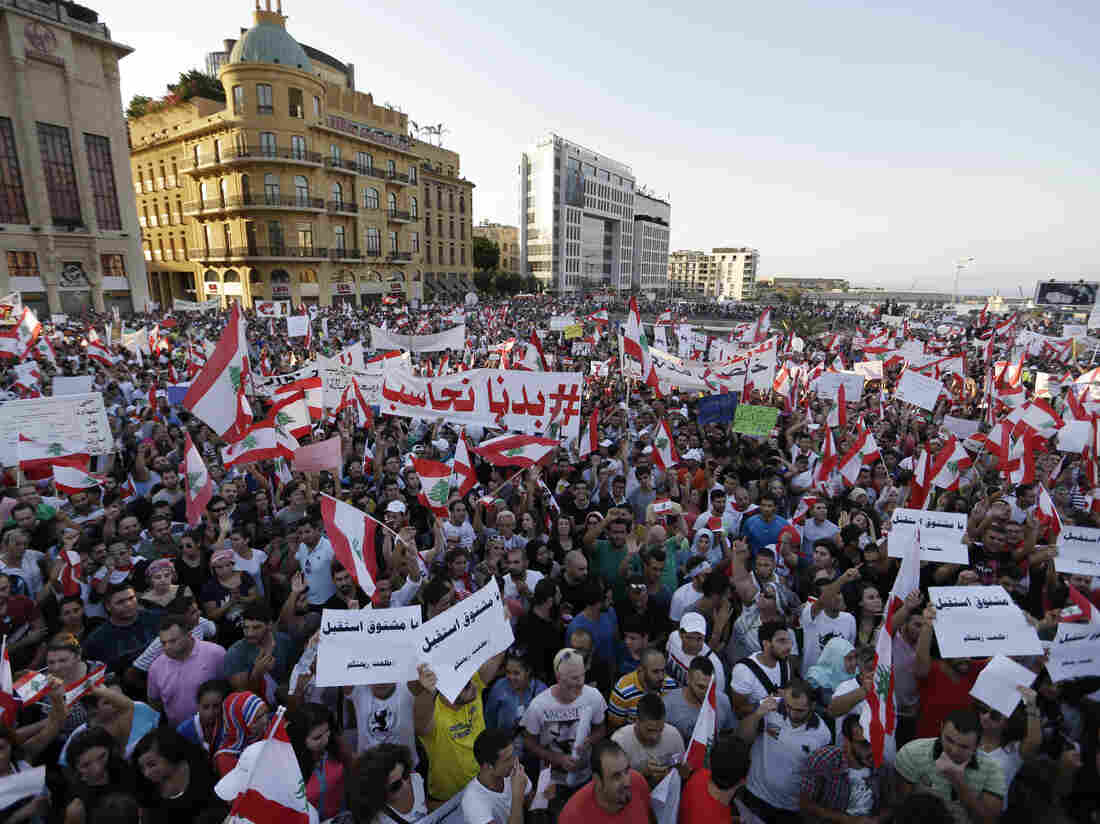 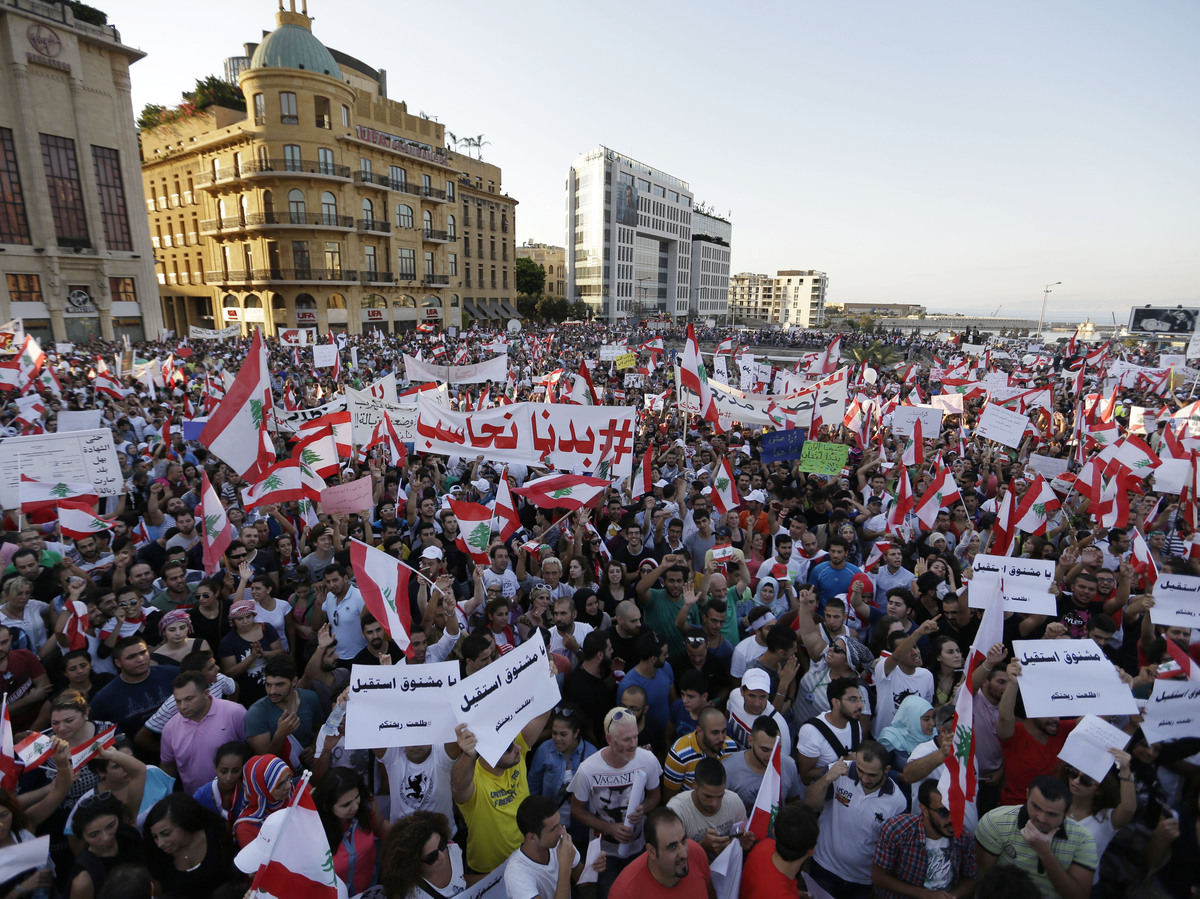 Thousands took to the streets in Martyrs' Square in the Lebanese capital of Beirut on Saturday for the second week in a row to demand government accountability and solutions for a mounting garbage crisis.

Also for the second week in a row, the diehard protesters were dispersed by force. As the sun set and the families went home, a faction of protesters tried to break through barricades protecting the government palace. Police chased them down with batons, clearing the entire downtown and arresting stragglers.

They came despite the violent dispersal last weekend. The government has opened an investigation into the use of excessive force, including rubber bullets and live ammunition fired in the air by the security forces. Some of the protesters arrived still bearing their bruises.

Jean Moukazel, a construction contractor, said he was beaten by the police last weekend, but that didn't stop him or his wife from returning to demand that the government step down. He says leaders have failed to provide even the most basic services, like water and electricity.

"The only thing Lebanese had was hope and dreams," Moukazel said. "And now they're dreaming about leaving the country, and that's why they're demonstrating. We want [the government's] resignation to create a new government and parliament so we can have a hope of having a new Lebanon — the Swiss of the Middle East, as it was a long time ago."

He says he worked outside Lebanon for 25 years, but he wants to fight for his future in his own country. He thinks the demonstrations will keep growing.

"Last week was smaller: Saturday, Sunday bigger," he said. "Today much bigger, and tomorrow even bigger. It will grow. It's like a snowball."

"From north to south, from Bekaa to Beirut, a people united never die!" organizers shouted from megaphones amplified by trucks full of speakers. Women and men took turns leading protests, as demonstrators line-danced, drummed and chanted along.

The organizers are now calling for a sustainable solution to the garbage crisis and accountability for the interior minister and those who ordered force against demonstrators. #YouStink has promised more demonstrations in all parts of Lebanon on Tuesday if the first demands aren't met.

Other demonstrators aren't willing to wait, and have vowed to take to the streets again Sunday to demand that the entire government resign in one go.

One of them is Ali Dawi, who came with his baby boy slung around his chest. Dawi wants a new government of technocrats. He says that bringing his newborn to the protest is a statement.

"The money of this little boy has been taken by this bunch of corrupt politicians," he said. "His future is in danger much more if they remain."

But not everyone is so sure. With the Syrian civil war raging next door, some worry that demonstrations here could unleash sectarian violence in a deeply divided country.

"Even if we did 100 years of peaceful protests, this regime won't go down except with violence," said Khodr Sobah as he watched the march pass by.

Flanked by his wife and three young daughters, Sobah said he supports the demonstrations but has little hope that they will continue peacefully.

"Those political leaders stuck to their chairs won't go in the name of peace or civility," he said. "Even if all the Lebanese people took to the streets and told them to."

Sobah pointed out that many current political leaders were born out during the violence of the country's 15-year civil war.

"All of these politicians came to power by blood," he said. "They're all ex-warlords, and they won't go except by blood."

In the Lebanese capital Beirut, bars and restaurants shuttered their doors tonight in solidarity with anti-government protests that have grown over the last week. NPR's Alison Meuse reports that demonstrators are calling for nationwide protests on Tuesday if their demands over garbage collection and government corruption aren't met.

ALISON MEUSE, BYLINE: That's the sound of thousands of demonstrators marching to downtown Beirut. Lebanese protesters are giving the government 72 hours to find a sustainable solution to the garbage collection crisis. They also want accountability from the government for firing rubber bullets on demonstrators last week when hundreds were injured. The government is investigating the excessive use of force, but they haven't solved the garbage issue. Lebanon's main dump is beyond capacity, and uncollected trash has been piling up in people's neighborhoods. That's the spark that brought people to the streets demanding the government resign.

JOAAN MOURKAZEL: The only thing that the Lebanese had is hope - hope and dreams. And now they do not have it. They are dreaming about leaving the country. So that's why we are demonstrating. We want their resignation to create a new government, a new parliament, so we can have the hope of having a new Lebanon, the Swiss of the Middle East, as it was before a long time ago.

MEUSE: That's Joaan Mourkazel, a construction worker. He says he was beaten by police last week. But that didn't stop him from coming today.

MOURKAZEL: Last week was smaller - Saturday, Sunday bigger - today, much bigger and tomorrow, even bigger. It will grow. It's like a snowball.

MEUSE: People from all walks of life joined. Even pregnant women and people in wheelchairs braved the crowds. One father, Ali Dawi, had his baby boy slung around his chest. He says that bringing his baby is a statement.

ALI DAWI: Well, the money of this little boy has already been taken by this bunch of corrupt politicians. His future is in danger much more if they remain.

MEUSE: But not everyone is so sure. With the Syrian conflict raging next-door, some worry that demonstrations here could unleash sectarian violence. Khodr Sobah joined the protest with his wife and four young girls. He says he'd like things to stay peaceful, but he's not counting on it. He points out that the politicians they're trying to remove were born out of Lebanon's 15-year civil war.

MEUSE: He says "All of these politicians came to power by blood. They're all ex-warlords, and they won't go except by blood." Late tonight, protesters tried to break through barricades protecting Lebanon's government palace. Police once again used force to clear the square. Alison Meuse, NPR News, Beirut.