Accessibility links
Their Crimes Reclassified, Some Californian Felons Get A Second Chance Approved by voters last year, Proposition 47 lets people with some nonviolent felonies petition to reduce their crimes to misdemeanors. It's giving former offenders access to better opportunities.

Listen · 4:22 4:22
Their Crimes Reclassified, Some Californian Felons Get A Second Chance 4:22 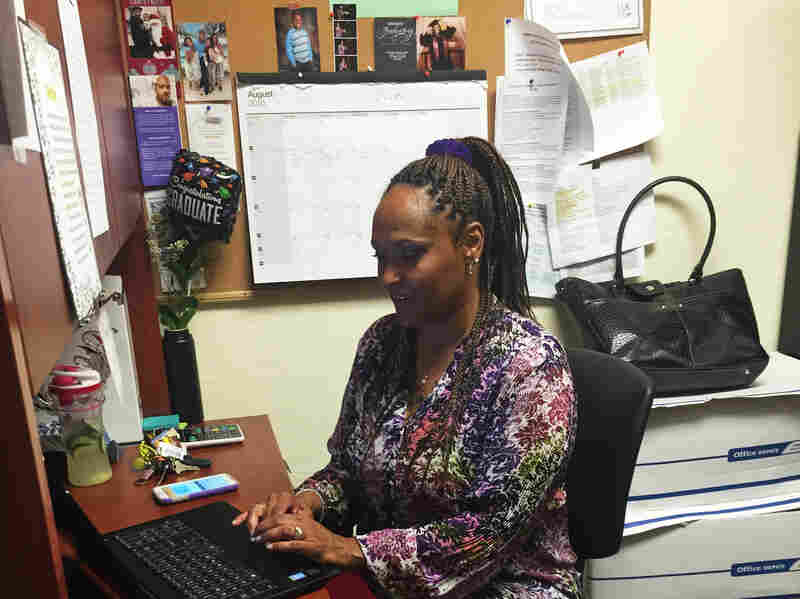 Sholonda Jackson works at Operation Dignity, a nonprofit in Oakland, Calif., that provides housing to homeless veterans. California's Proposition 47 enabled the former crack addict to seek a reduction of her drug felonies to misdemeanors. She has earned a bachelor's degree and is working full time. Marisa Lagos/KQED hide caption 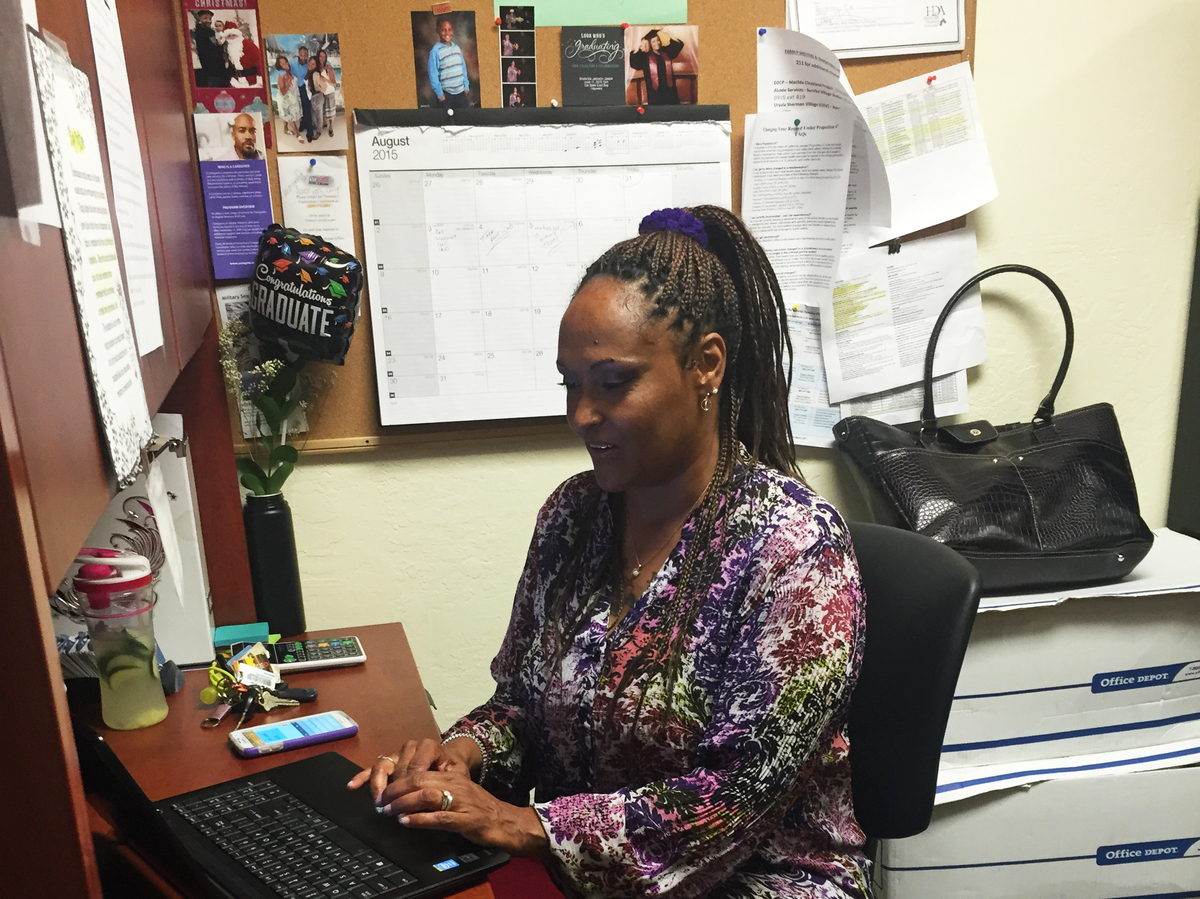 Sholonda Jackson works at Operation Dignity, a nonprofit in Oakland, Calif., that provides housing to homeless veterans. California's Proposition 47 enabled the former crack addict to seek a reduction of her drug felonies to misdemeanors. She has earned a bachelor's degree and is working full time.

Last November, voters in California overwhelmingly approved Proposition 47, which lets people with some nonviolent felonies petition a court to reduce their crimes to misdemeanors. And that has opened up new opportunities for many former offenders.

Take 21-year-old Sofala Mayfield, for instance. Mayfield's life began to fall apart in his teens, after his grandmother suffered a stroke and his mother fell back into drug addiction.

Sitting at the kitchen table in the San Francisco home where he grew up, Mayfield says his run-ins with the law didn't seem as big of a deal when he was a teenager.

"When I was a minor, I caught a few felonies, but it was, like, petty felonies," such as graffiti and vandalism, he recalls.

But after Mayfield turned 18, he was convicted of theft for stealing an iPhone.

"I didn't really know, like, how serious it was until I was an adult and I had a felony and I really tried to go get a job," he says.

Mayfield says after getting out of jail, he applied for position after position.

"I didn't get any calls back. I'd call them back — 'Oh, our hiring manager's not in,' you know," he says. "I just had a feeling that's what it was, just me having the felony on my record and stuff."

At the urging of his probation officer, Mayfield called the public defender's office and asked them if he was eligible for his crimes to be reclassified under Proposition 47. Within a month, his felony record was gone. He now has two jobs and is helping support his younger siblings.

Significant Impact For Offenders, Some Impact On Crime

Mayfield is one of tens of thousands of nonviolent felons who have gone to California courts since November and asked a judge to reduce convictions to misdemeanors.

Court officials say they have received more than 160,000 petitions so far.

Vincent Andrade is chief deputy public defender in the Central Valley county of Merced. So many people are curious about Proposition 47 relief that his office holds a legal clinic every week for offenders.

Demand is so great, he says, they have to cap each session at 10 people.

Andrade says the impact is significant. An old felony can stigmatize people for the rest of their lives — preventing them from getting jobs, financial aid and housing.

Is It Possible To Let More People Out Of Prison, And Keep Crime Down?

"What does it lead you to not seek out because you don't think you'll even accomplish what you're trying to do?" he says. "It really takes away a person's initiative if they don't think they have a future."

But not everyone thinks the changes brought by Proposition 47 have been entirely positive. San Francisco Police Chief Greg Suhr says he does support clearing past felonies for people who have turned their lives around.

But he says the new lower threshold for many property crimes could explain a spike in offenses since the measure passed.

"With the No. 1 deterrent to crime being fear of being caught, they're not really worried about being caught because it can never get to a felony," Suhr says.

Giving 'The Hopeless' A Way Forward

But former offenders who have already changed their lives say Proposition 47 is allowing them to finally move on.

Sholonda Jackson spent her 20s addicted to crack. She was in and out of prison 13 times.

"People said I was hopeless, right? The parole officer, the parole board, when I was in prison, they said 'she's hopeless.' But that's not true. I don't think there's such thing," she says.

Jackson has been sober for 11 years. She's married, raising her 8-year-old son, and recently earned her bachelor's degree. She's working full time and hopes to pursue a master's.

But Jackson also says the changes she's been able to make since Proposition 47 aren't a cure-all. She has several misdemeanor prostitution charges from her days as an addict that continue to haunt her.

After her drug felonies are reduced to misdemeanors, Jackson says she will ask a court to expunge the prostitution charges from her record.

"When I get my master's degree, what if I want to go work for the VA, or for Kaiser? I'm sure it would come up," she says.

Jackson hopes the changes and a clean slate would allow her to pursue all her dreams.