Accessibility links
'The Shepherd's Crown' Tells Terry Pratchett Fans How To Mourn Him The fantasy author's last novel opens with the death of one of his most beloved characters and serves as an illustration of his thoughts on his own impending death and the inevitability of change. 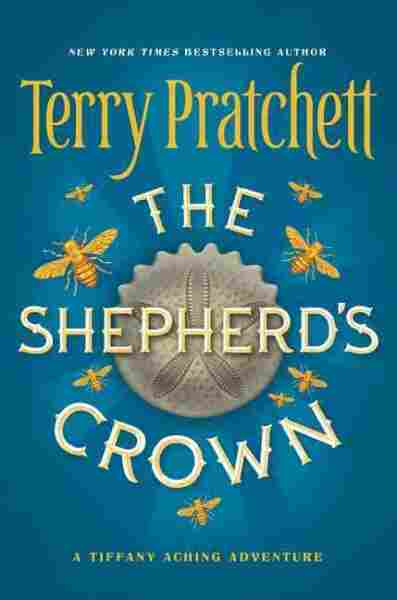 Spoiler alert: Terry Pratchett's final novel begins with the death of one of his toughest and best-developed characters.

Over the course of more than 40 novels about the Discworld, an absurdist fantasy realm that let England's one-time bestselling author metaphorically (and often comedically) explore humanity, Pratchett built up a handful of core characters who were his clear favorites. First introduced in 1987's Equal Rites, the formidable witch Granny Weatherwax was one of his most iconic, a representation of his thoughts on intelligence, duty, psychology and leadership. And when she succumbs to age in the opening pages of The Shepherd's Crown, she provides a fittingly no-nonsense illustration of Pratchett's thoughts on death.

Pratchett was diagnosed with early-onset Alzheimer's in 2007, and he subsequently became an outspoken assisted-suicide advocate, famously proclaiming he planned to end his life in his garden, brandy in hand. But his disease took a relatively rare form that affected his sight and coordination rather than his memory; he kept writing almost until his death in March 2015. And with his final book, he gives his fans an idea of how he approached his passing, and how he expects them to deal with it. Granny Weatherwax anticipates her end, and prepares calmly: She makes her own casket, selects her burial spot, cleans house and leaves instructions for her heir. And above all, she meets Death — another longtime Discworld character, drawn as a wryly genial presence — as a respected compatriot.

Given how rushed some of The Shepherd's Crown feels, the leisurely, melancholy sprawl of this sequence makes it feel like something Pratchett thought through in considerable detail well before he wrote this book. Like all things related to Granny Weatherwax, it's focused on practicalities, not on emotions like grief or fear. And when her friends find her body, they swallow their feelings and take the necessary steps with the sedate rationality they know she would demand. But for all the book's peaceful, straightforward treatment of mortality, Granny Weatherwax's demise still feels momentous and regal, like C.S. Lewis ending the original Narnia in The Last Battle, or Neil Gaiman destroying The Land at the end of Sandman: A Game Of You. The book is unmistakably a personal, meaningful, but no-fuss goodbye to the world.

The book is unmistakably a personal, meaningful, but no-fuss goodbye to the world.

And significantly, it's largely about how life goes on for everyone else. The Shepherd's Crown is a tangle of plot threads surrounding Granny Weatherwax's designated heir, young witch Tiffany Aching, the lead in the young-adult Discworld series Pratchett began with 2003's The Wee Free Men. Tiffany has to deal with an incursion of malicious elves and what seems to be the Discworld's first male witch — in a pointed reversal of Equal Rites, which centered on its first female wizard.

Pratchett's novels frequently built on each other, but Shepherd's Crown makes an unusual number of direct references to past Discworld installments, as if drawing the series together. In particular, it ruminates over how the rise of the railroads in the previous novel, Raising Steam, has changed the world. Granny Weatherwax's death is more than a case of metaphorical author self-insertion: It's the symbolic death of a wild, rough-hewn, medieval-style world that's making way for a technically adept one. Like Tolkien's Middle Earth at the end of The Return Of The King, the Discworld is evolving into something modern and familiar, a world like our own.

A note at the end of the book explains that Pratchett did complete it, but didn't have time for the second passes he usually took to flesh out the story. That omission is obvious throughout The Shepherd's Crown: The writing is unusually blunt and artless in places, and there's an unevenness to the storytelling — some colorful side moments play out at rapturous length, while key action whisks by, and characters occasionally get lost in the blur.

But Shepherd's Crown is still recognizably Pratchett, from the giggle-fit-inducing footnotes to the stern moral message about selflessness, empathy and caring for others. And there's just as much of a moral stance in the way the book addresses the death of a longtime pillar of the Discworld: People around the Disc sense that something pivotal has happened. They stop to acknowledge the gravity of the moment. They pay their respects. And then they return to their lives. And Tiffany, musing over where Granny Weatherwax has gone, contentedly concludes that she's "everywhere." The author's message couldn't be clearer, or kinder to his readers. In our reality, Pratchett was determined to define his own life and death on his own terms. Now, in a fittingly fictionalized form, he's done it one final time.

Tasha Robinson is a freelance writer and a former senior editor at The Dissolve and The A.V. Club.