Accessibility links
So, What's The Big Deal With Starting A Sentence With 'So'? It has been called the new "um" or "like," but linguist Geoff Nunberg says starting sentences with "so" isn't a new trend. People have been doing it for years. We're just noticing it more now. 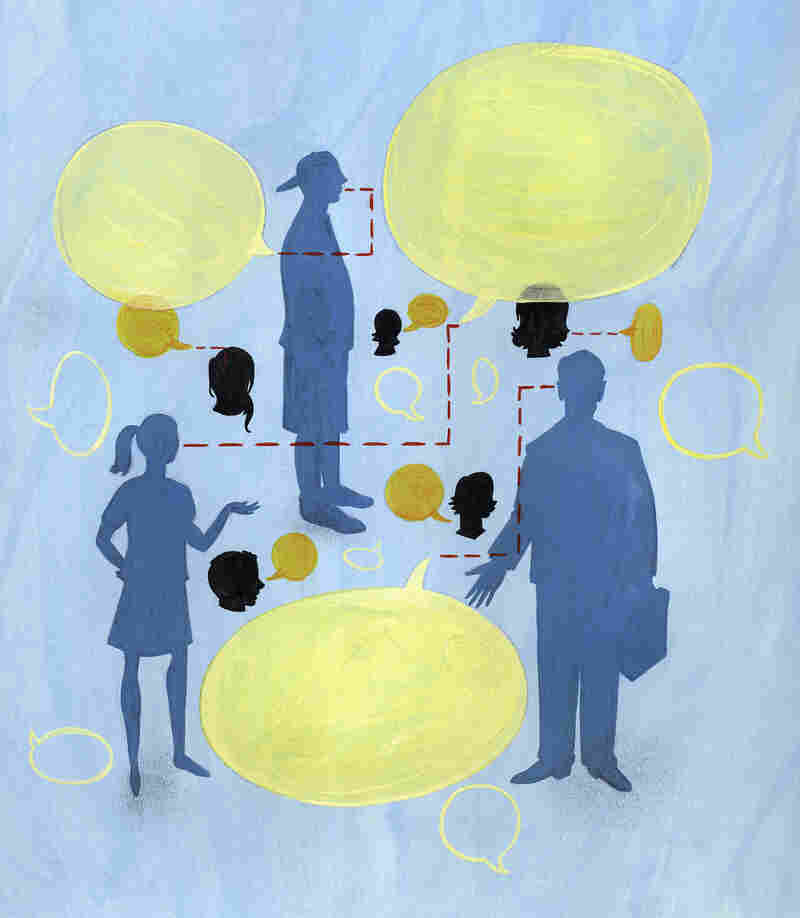 Are people starting sentences with "so" more frequently than ever or are we just noticing it more? Leigh Wells/Ikon Images/Getty Images hide caption 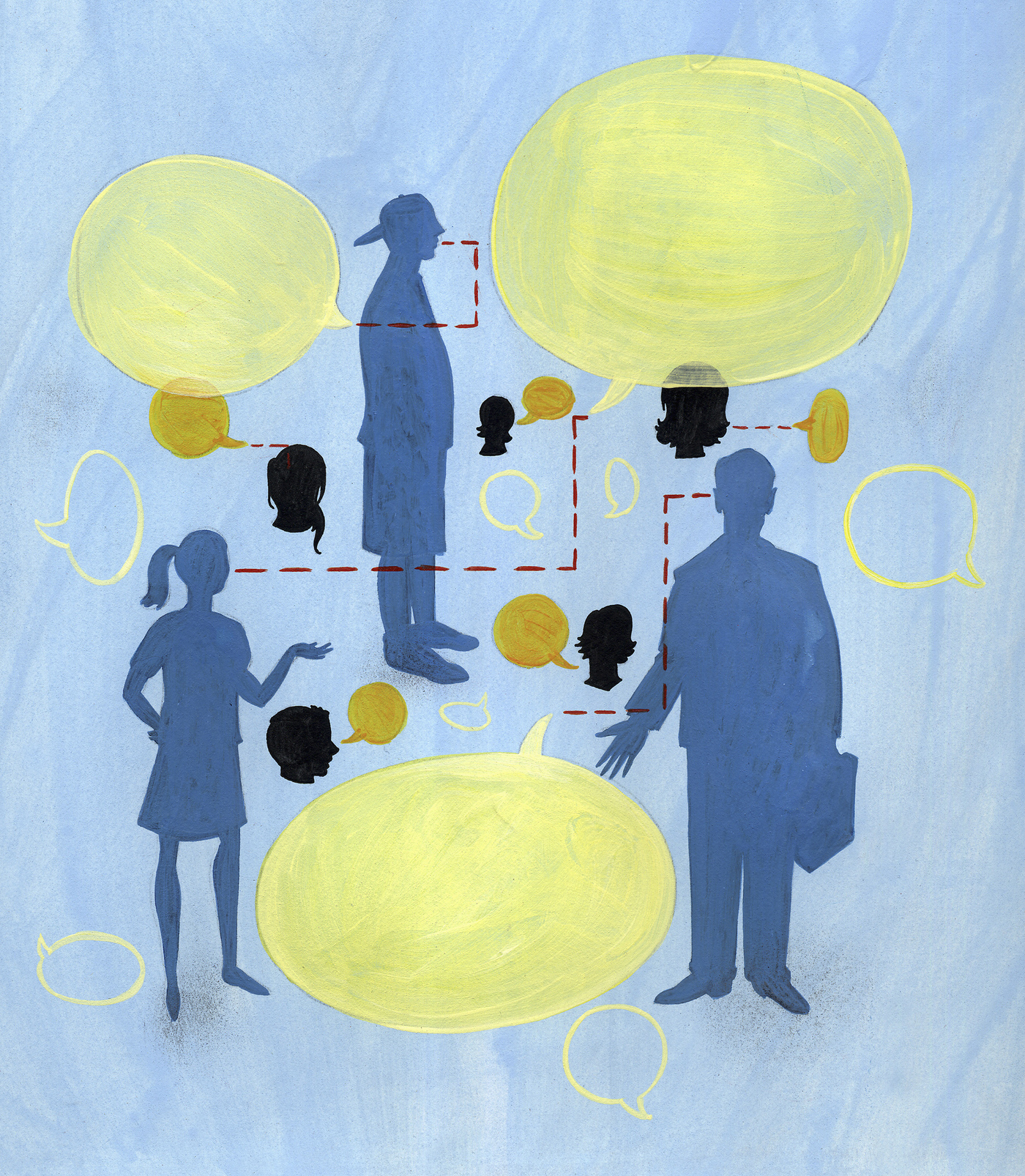 Are people starting sentences with "so" more frequently than ever or are we just noticing it more?

To listen to the media tell it, "so" is busting out all over — or at least at the beginning of a sentence. New York Times columnist Anand Giridharadas calls "so" the new "um" and "like"; others call it a plague and a fad.

It's like a lot of other grammatical fixations: Not everybody cares about it, but the ones who do care care a whole lot. When NPR's Weekend Edition asked listeners last year to pick the most-misused word or phrase in the language, that sentence-initial "so" came in in second place, right behind "between you and I" and ahead of venerable bugbears like misusing "literally" and confusing "who" and "whom." That's a meteoric rise for a peeve that wasn't even on the radar a decade ago.

NPR itself has been singled out for overuse of "so" by both interviewees and hosts. That prompted the NPR head of standards and practices to calculate how many times the hosts and reporters on the major NPR news programs had started sentences with "so" in a single week in August of 2014. When the total came to 237, he urged them to look for alternatives.

But not so fast. When you break that weekly figure down, it only comes to one sentence beginning with "so" every eight or 10 minutes. That isn't actually very many, particularly when you're running a lot of interviews. After all, "so" is a conversational workhorse. It announces a new topic, it connects causes to results, it sets up a joke. "So, what's it like being Justin Bieber?" "So, do the low interest rates help farmers?" "So three gastroenterologists walk into a bar."

It's like a lot of other grammatical fixations: Not everybody cares about it, but the ones who do care care a whole lot.

Starting sentences with "so" isn't a trend or a thing. However it may strike you, people aren't doing it any more frequently than they were 50 or 100 years ago. The only difference is that back then nobody had much of a problem with it. When F. Scott Fitzgerald's editor Maxwell Perkins sat down with him to go over the manuscript of The Great Gatsby, he didn't say: "Scott — this last line. 'So, we beat on, boats against the current' etc. etc.? I think we need to go with 'thus.' "

So, why the recent hue and cry about those sentences beginning with "so"? In part, you could blame the quirk of perception I think of as the Andy Rooney effect, where you suddenly become keenly aware of a common word that's always been part of the conversational wallpaper. Somebody says, "Have you noticed how everybody's saying 'OK' before they hang up the phone?" and all at once the word starts jumping out at you, even though people have been using it that way forever.

Many of the complaints about sentences beginning with "so" are triggered by a specific use of the word that's genuinely new. It's the "so" that you hear from people who can't answer a question without first bringing you up to speed on the backstory. I go to the Apple Store and ask the guy at the Genius Bar why my laptop is running slow. He starts by saying, "So, Macs have two kinds of disk permissions ..." If that "so" were a chapter title in a Victorian novel, it would read, "In which it is explained what the reader must know before his question can be given a proper answer."

The Curious Listener: 'So,' Is This A Fad?

Scientists have been using that backstory "so" among themselves since the 1980s, but its recent spread is probably due to the tech boom. In his 2001 book The New New Thing, Michael Lewis noted that programmers always started their answers with "so." That's around the time when I first heard it, working at a Silicon Valley research center. Mark Zuckerberg answers questions with "so" all the time: "So, it comes down to the economics ..." "So one of the services that the government wanted to include ..." But by now that backstory "so" is endemic among members of the explaining classes — the analysts, scientists and policy wonks who populate the Rolodexes of CNBC and The PBS NewsHour.

To my ear, that backstory "so" is merely a little geeky, but it rouses some critics to keening indignation. A BBC host says speakers use it to sound important and intellectual. A columnist at Fast Company warns that it undermines your credibility. A psychologist writes that it's a weasel word that people use to avoid giving a straight answer.

That's a lot to lay on the back of a little blue-collar conjunction like "so." But that backstory "so" can stand in for people's impatience with the experts who use it. When you hear a labor economist or computer scientist begin an answer with "so," they're usually telling us that things are more complicated than we thought, and maybe more complicated than we really want to know. That may be why they were called in in the first place, but as Walter Lippmann once said, the facts exceed our curiosity.

That backstory "so" puts me on guard, too, even when I hear it coming out of my own mouth. Usually it just introduces some background qualification that the question calls out for, as in, "So ... German isn't actually a romance language." But sometimes it announces some nugget of specialized linguistic knowledge that I feel the need to share. If that "so" were a chapter title in a Victorian novel, it would read, "In which the reader is asked, 'Are you sitting comfortably?' "