Accessibility links
'Sorcerer' Is A Delightful Romp With Deep, Solid Roots Zen Cho's new novel is a charming, character-driven romance, set in a magic-ridden Regency England — but there are serious questions of race and class underpinning the lighthearted action. 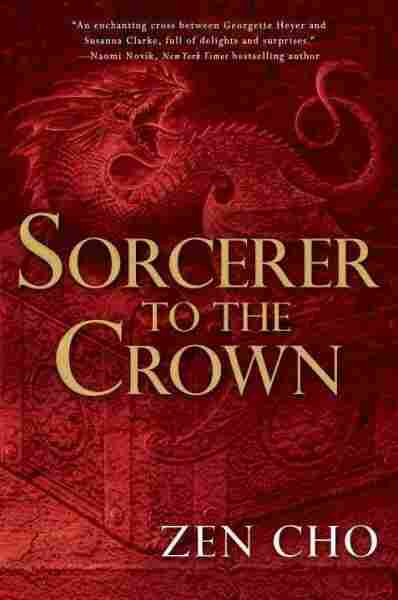 There are several ways in which Zen Cho's Sorcerer to the Crown invites comparison with Susanna Clarke's best-selling, BBC-adapted Jonathan Strange and Mr Norrell: It features squabbling English magicians, a Regency setting and a mysterious decline in English magic attributed at least in part to difficult relations with capricious fairies. But where Jonathan Strange and Mr Norrell is a severe, atmospheric marshaling of scholarship both fantastical and historical — a book about books, riddled with footnotes and nested stories — Sorcerer to the Crown is a relentlessly charming, character-driven romance in which women and people of color take center stage.

While Unnatural Philosophers and Thaumaturges abound in England, only those magic-users with fairy familiars may call themselves sorcerers — and there are precious few of those left in England, where magic has been dwindling for some time. When Sir Stephen Wythe, England's Sorcerer Royal, dies in mysterious circumstances, his adopted black son Zacharias takes up the Sorcerer's staff amid malicious mutterings that he murdered his guardian for the position. The timing is terrible: Besides being in disgrace with Fairyland, England is enmeshed in non-magical war with France and in tense diplomatic talks with the Sultan of Janda Baik over the matter of witches and snake-women. Zacharias must contend with an overreaching government, assassination attempts, the decline of magic — and, most unexpectedly, with Prunella Gentleman, a dark-skinned young Englishwoman of uncertain parentage who wishes to escape her magical school and enter society.

Absolutely everything about this book is delightful. I can't remember the last time I read a fantasy novel that made me laugh so much — and as often as I laughed, I gasped, I shouted rude words at offending characters, and just generally fell over myself with admiration for Cho's dextrous depiction of Regency manners and wit. Watching Zacharias seethe with vicious politeness at his enemies while being helplessly buffeted by Prunella's well-intentioned ambitions is a splendid treasure, and I outright marvel at Cho's ability to beleaguer and beset a patient man with a kitchen sink's worth of perilously stacked difficulties.

I can't remember the last time I read a fantasy novel that made me laugh so much — and as often as I laughed, I gasped, I shouted rude words at offending characters, and just generally fell over myself with admiration.

But while much of the action is lighthearted and romping, the threats are viscerally real. Cho's achieved something remarkable in making corrupt bureaucracy more terrifying than dragons; ambitious baronets more dangerous than vampires. I was genuinely chilled by the depiction of powerful men's whims where magic and the Sorcerer Royal's position were concerned: Dragons can be fought and beaten, but white supremacy and institutional oppression are as atmospheric as the magic in Cho's world. There's also a very serious dimension to Zacharias' musings on his parentage, his heritage and the bonds that connect him to England, wealth and his adopted family; difficult conversations take place between him and Lady Wythe, between him and Prunella, even between him and the ghost of Sir Stephen.

A great deal of Sorcerer to the Crown actively exploits gaps and shortcomings in Jonathan Strange and Mr Norrell — and I say this as someone who loves that book enough to have ritually consumed it in cake form at my wedding. Unlike the servant Stephen Black, Zacharias Wythe is never a rhetorical device or plot convenience; unlike Lady Pole and Arabella Strange, Prunella Gentleman is never helpless. Magic is not the exclusive property of England, and there are philosophical disagreements between magicians from England, China and India that significantly affect the plot. Effectively, Cho foregrounds characters that are usually treated as curiosities and set pieces in Regency fiction, giving them complex inner lives and thoroughly enriching her world-building as a result.

Structurally, I was surprised by the book's swift, deus ex machina style ending. For most of it I was reminded of an increasingly precarious house of gilt-edged cards, and was startled to see Cho sweep that structure aside to build something different from the wreckage. But on reflection, that's as appropriate a way of dealing with institutions as any, and this is a book as much about defeating institutions as it is about fairy bargains and magical formulae.

Witty, wise and wonderful, Sorcerer to the Crown is an admirable achievement and a deep delight.

Read an excerpt of Sorcerer to the Crown