Accessibility links
Superpowers Meet The Supernatural In 'Wayward' Fans of Buffy the Vampire Slayer will get a kick out of a graphic novel series that takes the magical-teens-battling-evil-monsters trope and transplants it to a lovingly rendered Tokyo.

Superpowers Meet The Supernatural In 'Wayward'

Superpowers Meet The Supernatural In 'Wayward' 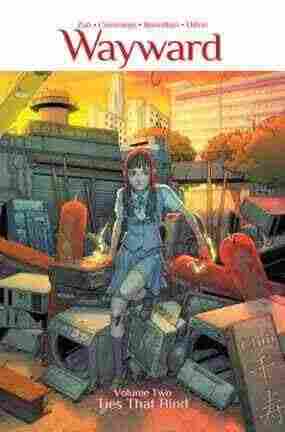 Ever heard of a tengu? How about a jorōgumo? You'll know them after you read Wayward, Image Comics' action-packed romp featuring Tokyo teenagers fighting the supernatural. It's been likened to a Japanese version of Buffy the Vampire Slayer, and its emphasis on epically battling the Big Bad (to use the Buffy term) is coupled with a determination to get its monsters right.

That's not surprising considering that the gaijin who created this title have a well-established respect for Japanese culture. Writer Jim Zub is the guy behind the awesome Samurai Jack comic, and line artist Steve Cummings once took a break from his prolific work in American-style comics to draw an English-language manga, Pantheon High. No wonder they saw fit to bring on Zack Davisson, folklore expert and translator of Shigeru Mizuki's celebrated Showa series, to write guides to all the supernatural entities the characters face. That's not to say this highbrow touch dilutes the excitement of Wayward — Zub's tale has a familiar structure, but he does a lot with the basics.

And really, what could be more basic than teenagers taking on terrifying monsters in hand-to-hand combat? It's got a certain inevitability about it. The first volume, "String Theory," introduced the idea of kids with special abilities teaming up under the leadership of half-Irish, half-Japanese expat Rori Lane. Rori was naturally pugnacious and assertive, pulling together the ad hoc group even as she struggled to understand her own powers. "String Theory" ended with her buried in an explosion, possibly dead. Now, in "Ties That Bind," the focus shifts to a less likely heroine: The timid, alienated Japanese girl Ohara Emi. The only thing unique about her, it seems, is her ability to physically adopt the properties of man-made objects. If she touches a soda bottle, her hand turns to glass; if she touches metal, she gets robot-style arms.

Emi is less relatable than Rori was, but she's a much more complex character. She spends most of the book trying to decide whether to take her power, both in the sense of making use of her unique abilities, and of coming into her own. When she finally does the latter, with the aid of a cryptic spider spirit, it's explosive. "Is this what courage feels like?" she wonders, swiping at a long-nosed tengu warrior whose blade is as big as she is.

Emi's reticence leaves the stage wide open for two characters who supported Rori in the first volume. Perky Ayane ("We're the good guys!" she declares, face spattered with demon blood) has awesome fighting skills and a mysterious affinity with cats. Low-key Nikaido can control emotions. Together they face off against a menagerie of yōkai, or supernatural monsters, all brought to vibrant life by Cummings and color artist Tamra Bonvillain. The spirits aren't exactly scary, but they're fascinating to look at.

Leading the baddies is slippery Nurarhiyon. In the first volume Davisson offered an amusing explanation of this character's "mysterious air of authority": "Nurarhiyon would find prosperous houses, then come in and start ... acting like an important house guest. The people would feel so flustered at his imperious nature, they began serving him without question. Only after Nurarhiyon left would they realize they had been tricked." So the top bad guy's nefarious power is ... unearned authority? That's a clever twist for a comic about, and aimed at, teens.