Accessibility links
Inspiration Or Appropriation? Behind Music Copyright Lawsuits Rock superstars Led Zeppelin face a claim that "Stairway to Heaven" was lifted from an earlier instrumental by the band Spirit. But what does it take to prove a song's ownership? 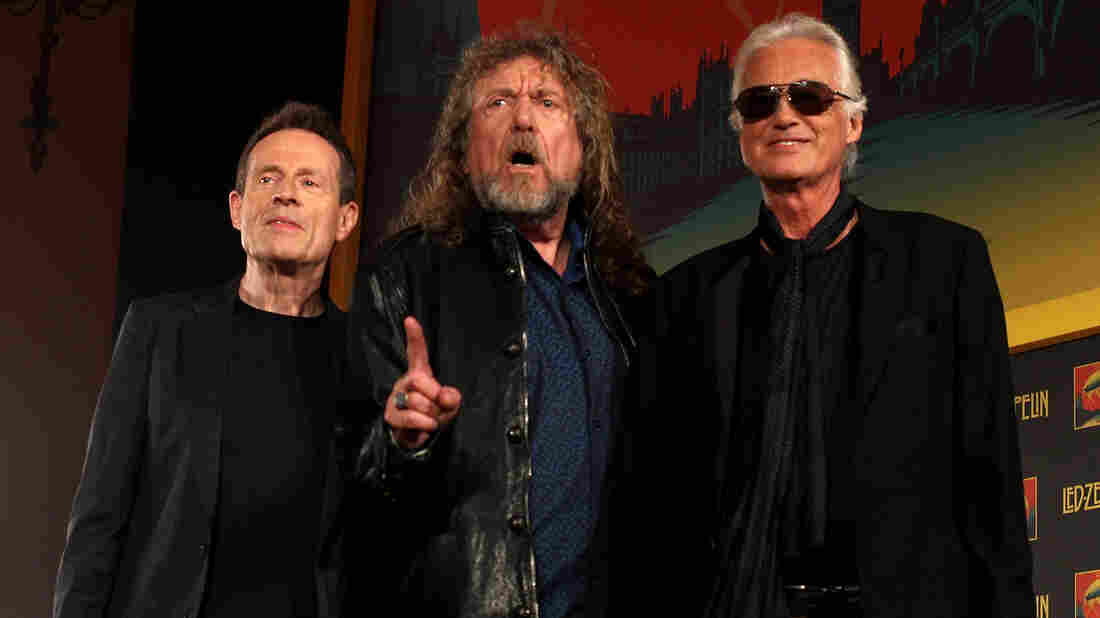 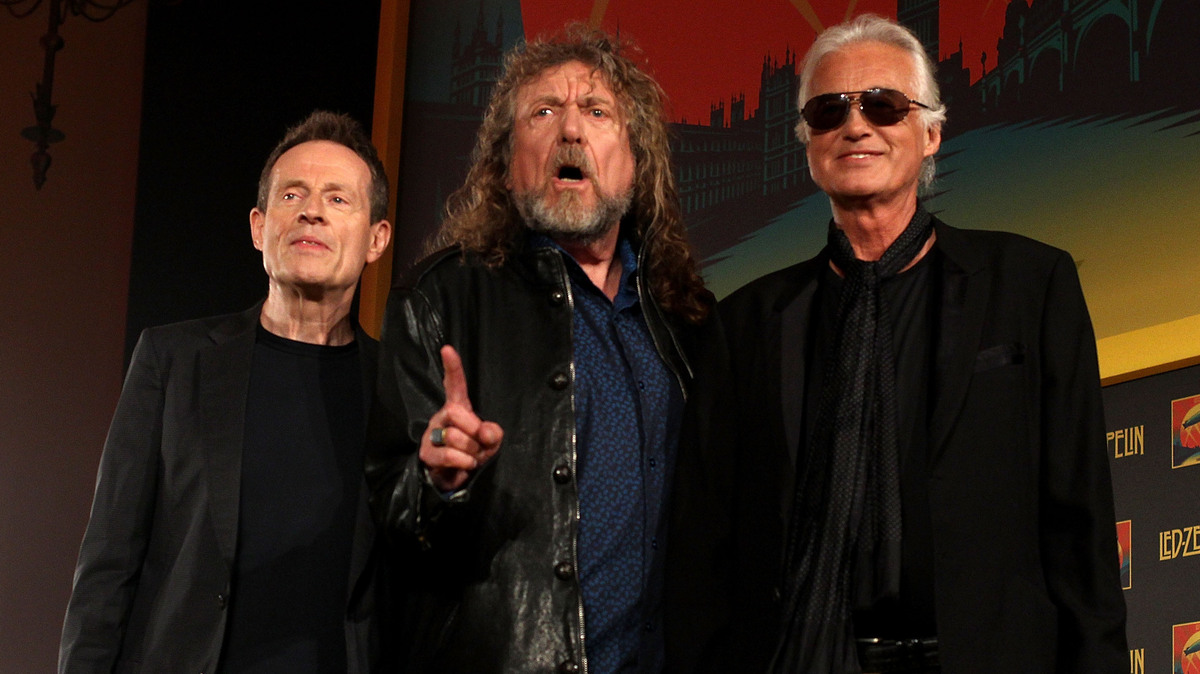 John Paul Jones, Robert Plant and Jimmy Page of Led Zeppelin. The band's "Stairway to Heaven" is the subject of a current copyright-infringement lawsuit.

Where do you draw the line between inspiration and appropriation when it comes to musical compositions? That question is at the heart of several high-profile court cases, including the recent "Blurred Lines" trial and a current copyright-infringement lawsuit involving "Stairway to Heaven." But it isn't always easy to prove a song is yours – particularly when you're up against one of the biggest rock and roll bands of all time.

To get an idea of how complicated this can be, here's one example of how a song can change – even a little bit – from one performer to the next.

Late one night, around 1960, folksinger Anne Bredon (known then as Anne Johannsen) brought her banjo to KPFK in Berkeley, Calif., and performed a song called "Babe, I'm Gonna Leave You" on the station's open mic show.

Berkeley student Janet Smith heard it and asked Bredon if she could teach her the song. Smith then tweaked it to come up with her own version and performed the song at college "hootenannies."

That's where Joan Baez heard it.

"[Baez] came up to me and said, 'I like the kind of songs that you sing. I wonder if you'd be willing to send me a tape,'" Smith says. "It didn't occur to me that I should have identified 'Babe, I'm Gonna Leave You' as being written by Anne Bredon, because in those days people who wrote stuff kind of hoped no one would notice, and have it be an 'official' folk song."

Baez changed it a little more, then recorded it for her 1962 concert album — but Bredon wasn't credited on the album. Two years later, when Baez's songbook was in the works, Janet Smith led the publisher to Bredon.

Another five years later, Led Zeppelin recorded its version of the song.

Neither Smith nor Bredon was into rock, so they didn't hear Led Zeppelin's veresion until the 1980s, when Smith's 12-year-old son brought it up.

"He said, 'Mom, I didn't know you did Led Zeppelin tunes,'" Smith says. "He said, 'There's this one called "Babe, I'm Gonna Leave You",' and I said, 'You know, John, just think how many people have written a song called "I Love You" and they copyright it, right, and there's 519 versions.' But then I thought maybe I better listen to it, and it was in fact Anne's song."

It was listed in the credits of Led Zeppelin's debut album as "Traditional, Arranged by Jimmy Page," so Smith helped Bredon pursue legal action, eventually winning an out-of-court settlement.

"The first step is establishing ownership," Anderson says. "That means that the material is original to you, meaning you're the one who created the material."

Anderson, who's represented both plaintiffs and defendants, says you also have to show that the accused had access to your material.

"In a case where you don't have very strong proof of access, but there is a striking similarity, some courts believe it's the expert's job to give testimony so that a determination can be made," Anderson says.

One of those experts is musicologist Judith Finell, who has testified in many high-profile cases, including the recent "Blurred Lines" trial. Although she can't comment on the specifics of that case, Finell explains how musicologists generally make comparisons.

"We listen to the music if it's recorded, or we study it if it's only in written form," Finell says. "And usually, we transcribe any section of that music if it sounds similar to the other music we're comparing it to. Then we start to determine if they have similar pitches in common, similar rhythms. What is it that makes them sound related?"

The same court that heard the "Blurred Lines" case is now considering a copyright infringement suit against Led Zeppelin over "Stairway to Heaven." The estate of the late guitarist Randy California alleges that the opening of Led Zeppelin's 1971 song sounds too much like the instrumental "Taurus," which was recorded by California's band, Spirit, in 1968.

Led Zeppelin's lawyers either declined to comment on the suit or didn't respond to emails. But Francis Malofiy, who represents California's estate, points out that in 1968 Led Zeppelin was not yet a famous band.

If the case goes to trial, it will be a rarity. Lawyer Ken Anderson says juries are unpredictable, and most litigants prefer private settlements. Anderson thinks this case could go either way.

"I could listen to the Led Zeppelin/Spirit thing and something will pop into my mind," Anderson says. "Like, you know, those are exactly the same chords, and progression, and descending chromatic bass line as, say, 'Michelle' by The Beatles, which trumps both of those because it came a long time before. Everybody's heard that."

For his part, Led Zeppelin guitarist Jimmy Page has denied the infringement claims in the "Stairway" suit.

Got To Give $7.4 Million Up: Jury Finds Pharrell And Thicke Copied Marvin Gaye Song

Led Zeppelin has been the subject of at least a half-dozen claims aside from "Babe, I'm Gonna Leave You" and "Stairway to Heaven." In 1985, songwriter Willie Dixon's estate sued Led Zeppelin over "Whole Lotta Love," claiming it was an infringement of Dixon's song "You Need Love" (recorded by Muddy Waters).

That case was settled out of court, as was a 2010 infringement suit by singer and songwriter Jake Holmes over "Dazed and Confused." Holmes had written and recorded his own "Dazed and Confused" two years before Led Zeppelin released theirs.

But for many songwriters, it's an uphill battle. Musicologist Judith Finell says that fewer than half the claims she's asked to evaluate are ultimately pursued.

"For an individual songwriter who basically has almost no money to go up against a company with an entire department of lawyers and outside counsel and endless amounts of money, it's a very impossible situation," Finell says.

The potential payoff may be worth the effort in cases like "Stairway to Heaven," where millions of dollars are at stake. But lawyer Francis Malofiy insists it's just as much about seeking credit where credit is due.

"This lawsuit, it's in large part about having to re-educate the public that there was an individual called Randy California, and he was a phenomenal guitarist," Malofiy says. "And part of this is about re-educating the public [about] this relatively unknown song called 'Taurus.'"