Accessibility links
Before Superstardom, Williams Sisters Stunned On Compton's Courts Before the U.S. Open, the Nike and Gatorade sponsorships and the fame, Venus and Serena Williams were taking their first swings on tennis courts in Compton, Calif. It's a source of pride in the city.

On Stockton Street, in Compton, Calif., there's a small white stucco house with a chain-link fence and an old tree out front.

There's isn't a sign or plaque in the yard, and there aren't any tour groups taking photos. There's nothing here to indicate that this house, in this quiet neighborhood, was the childhood home of two of the best athletes of all time. 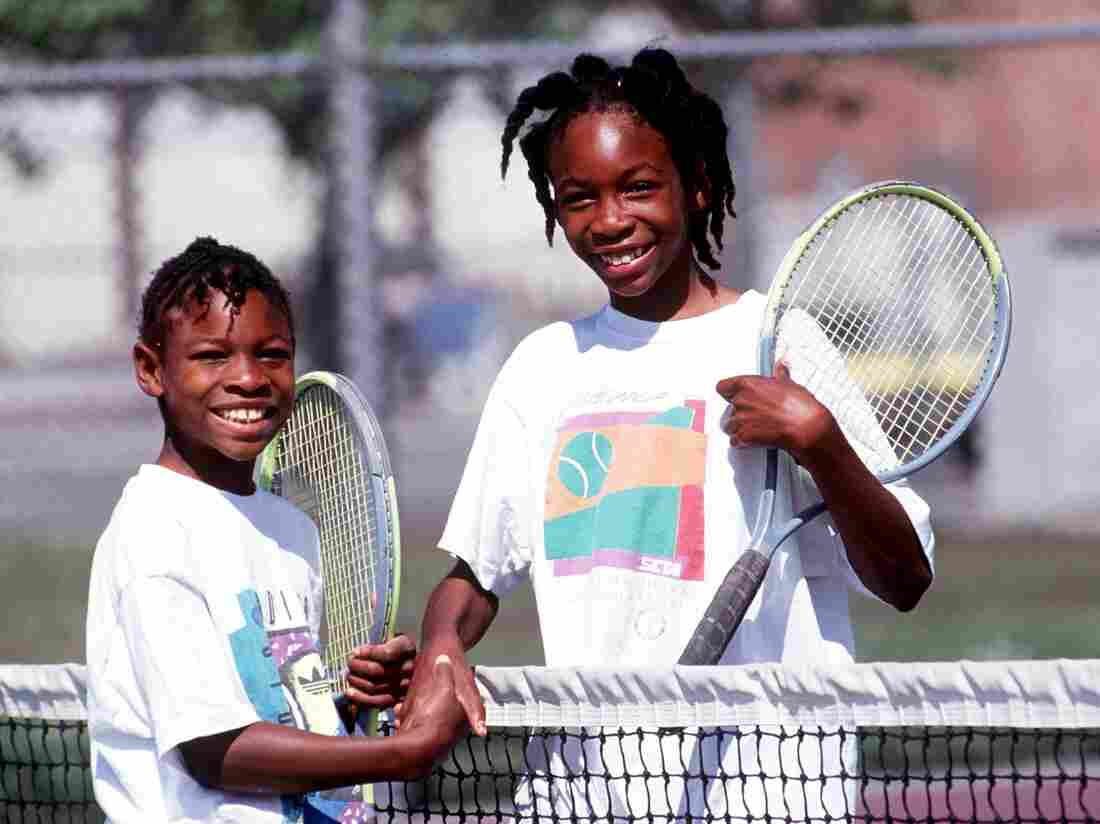 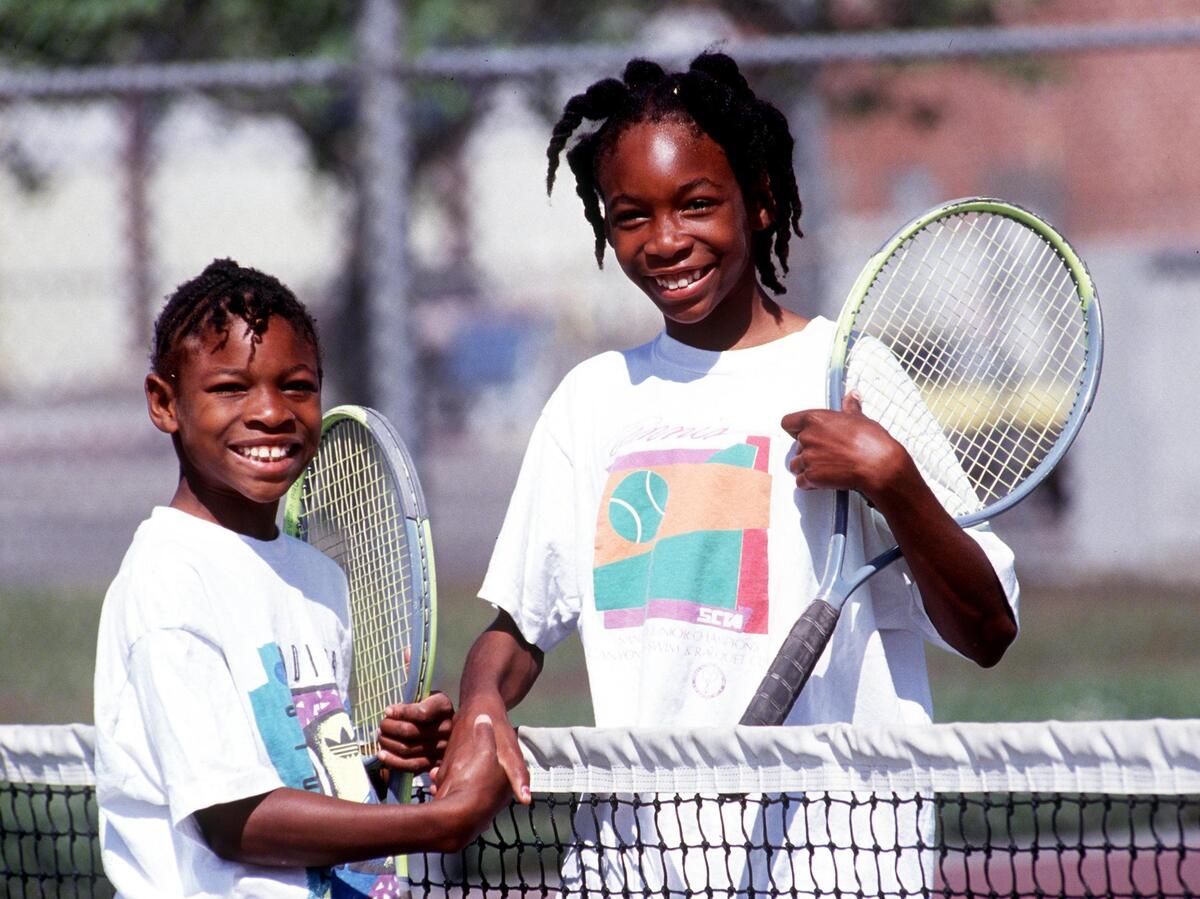 Sisters Serena, left, and Venus Williams shake hands after a match in 1991 in Compton, Calif.

Long before the U.S. Open this week, before the Nike and Gatorade sponsorships and before the stardom, a young Venus and Serena Williams were given their first tennis rackets here.

Next door, Maria Gomez leans up against her blue pickup truck. She's lived in this house since 1974, so she knew the Williams family. She says she remembers Venus and Serena running around the house and playing in the tiny backyard next door.

The girls cut their teeth on courts around Compton. And to this day, the Williams sisters are a source of pride in the city.

"To be able to say that they're from the town that you grew up in — who wouldn't be inspired by them?" says Janna Zurita, a Compton councilwoman. She was born and raised in Compton, and says she used to watch the Williams sisters train.

"A lot of the little kids here in the community, they look up to them and they think they're great. I mean, they're two beautiful women that changed the whole life of tennis," Zurita says. "And they're straight outta Compton."

Their dad, Richard Williams, was their coach back then. He was known for being tough and pushing his daughters to perfection on the court — hours on the courts, day in, day out.

Some of the places where they'd practice were in rough neighborhoods, like East Rancho Dominguez Park, formerly known as East Compton Park. Today, the courts are repaved and there's a new recreation center — but that's not how it used to be.

Andre Barbee says the last time he stood on the courts at East Rancho Dominguez, gang members would hang out on park benches just outside the fence.

"You see them thugged out, drinking, smoking their weed," he says. "But they never messed with us. So I never had a problem with nobody here."

Barbee was a 21-year-old limo driver and part-time tennis coach when Richard Williams invited him to train with his daughters.

"Tennis was a passion," he says.

Barbee was a tennis prodigy himself, so when he faced Venus and Serena on the court, he had finally met his match.

"Man, it was unbelievable," Barbee says. "Never seen nobody that good. It was something I'd never seen before in my life."

Venus wasn't even a teenager yet.

Training meant hitting hundreds of balls with enough force to break the strings on their racquets.

"Every other day, I was restringing my racquets," he says. "My shoes, once a week. A hole right in my foot of my shoe. Used to tape them up."

They'd run drills up and down the court, honing their power at the baseline. 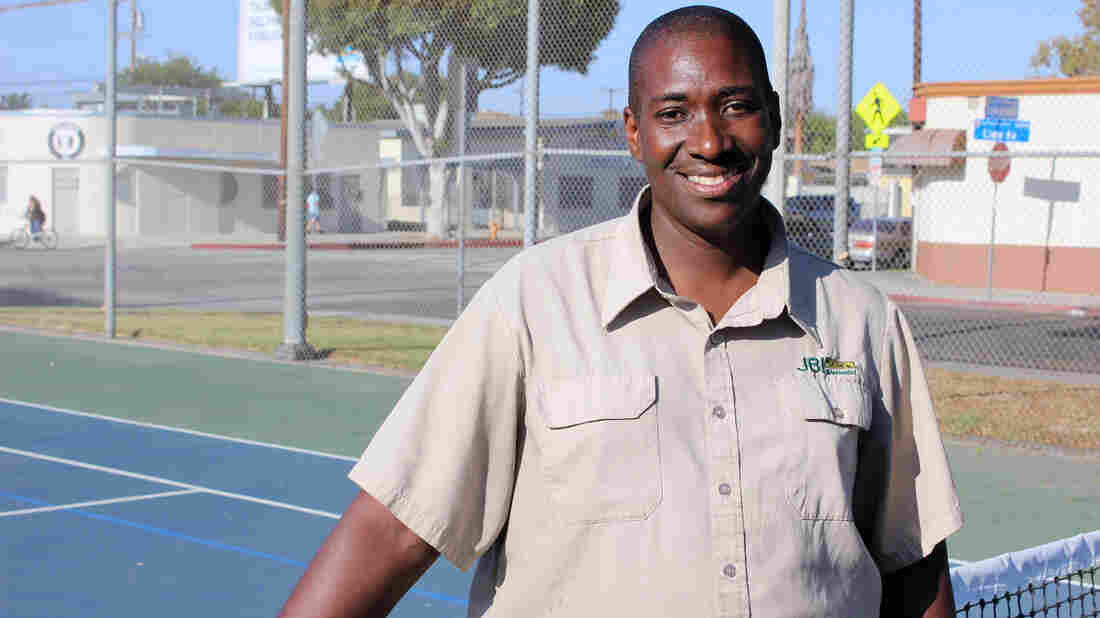 Andre Barbee met Venus and Serena Williams on the tennis courts at East Rancho Dominguez Park in Compton. He was 21 years old when Richard Williams invited him to train with his daughters. Daniel Hajek/NPR hide caption 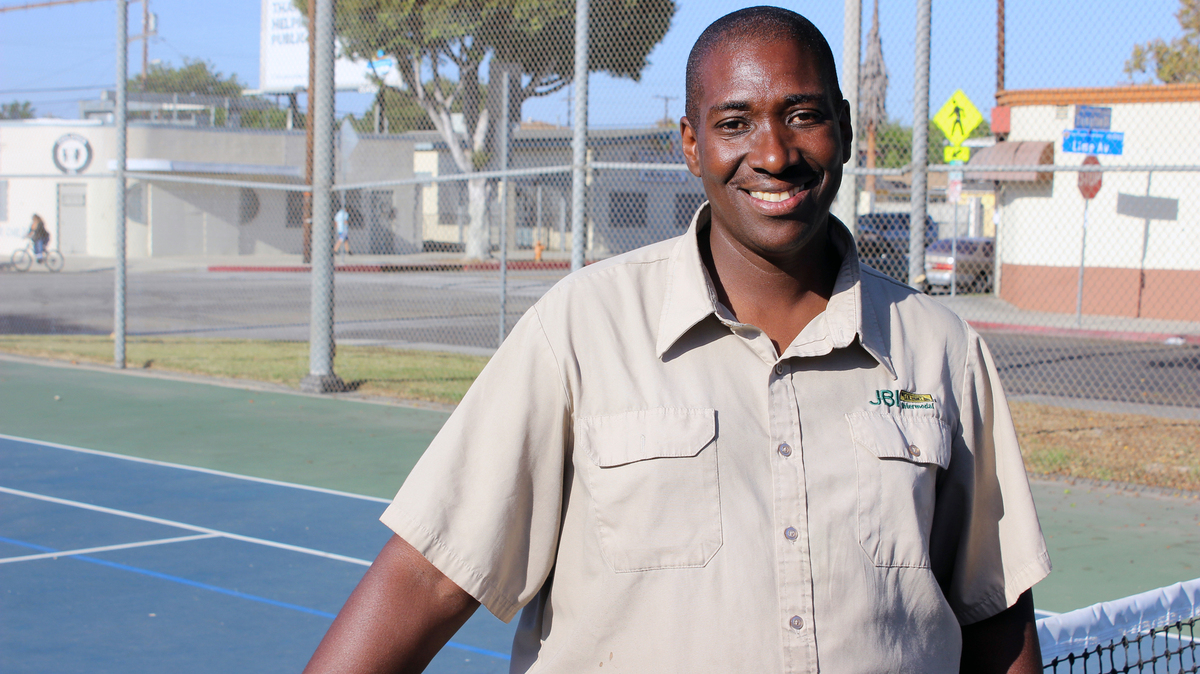 Andre Barbee met Venus and Serena Williams on the tennis courts at East Rancho Dominguez Park in Compton. He was 21 years old when Richard Williams invited him to train with his daughters.

This year, Serena has been unstoppable. If she wins the U.S. Open, she'll be the first since Steffi Graf in 1988 to win all four grand slam titles in the same year.

Older sister Venus, once dominant in the sport, is on an upswing. On Friday, she advanced to the fourth round of the U.S. Open when she beat 18-year-old Belinda Bencic.

Playing in Compton is a distant memory now: The Williams family moved to Florida in 1991. But this is where Venus and Serena learned the game's fundamentals.

"I love them like my little sisters," says Barbee. "And Richard Williams, I loved him like a father. He was like a dad, you know? I miss training with them. At the time, I didn't have a high school diploma. And [Richard] told me, 'Promise me that you get your high school diploma.'

"Richard? I kept my promise," he says. "I have my high school diploma."

Barbee doesn't play much tennis these days. But on this court, I can see him reliving that year he spent training with Venus and Serena Williams.

And for the record, the last time he played Serena, they never finished their match.

"She didn't beat me yet," Barbee says. "So Serena, if you're hearing this, you still owe me a match. I can still play. It's just, I can't play long. I can play a set. Come on Serena, give me one set."

He's ready for a rematch on the tennis courts at the corner of Compton Boulevard and Atlantic Avenue, where it all started.