Accessibility links
No Solace In 'Visiting Privilege,' But Plenty Of Truth No one escapes unscathed in Joy Williams' brilliant, brutal new story collection. Critic Michael Schaub calls Williams our poet laureate of loss, whose work is full of hope and perverse joy.

No Solace In 'Visiting Privilege,' But Plenty Of Truth

No Solace In 'Visiting Privilege,' But Plenty Of Truth 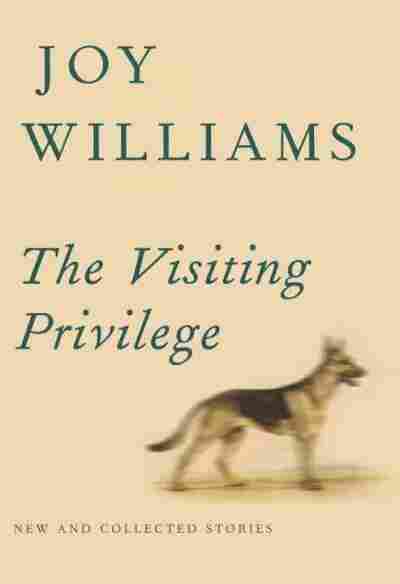 "What if everything one did mattered," Joy Williams writes in her short story "Cats and Dogs." "Thank God, it could not." It's a classic Williams sentiment — dark, but almost devotional, wise and somehow comforting. We're hard-wired to want to take credit for our kindnesses and to forget our cruelties, but being human means that every one of us is a mixture of both. As one character observes in Williams' story "Shepherd," "The ways that others see us is our life." There's no solace in that statement, but there's a lot of truth.

There's a lot of truth, actually, in every page of The Visiting Privilege, which collects 33 stories from Williams' previous books along with 13 new ones. Some are deeply funny; some are unbearably tragic. The subjects vary, though not widely — Williams writes beautifully about families, especially broken and dysfunctional ones, animals (particularly dogs, which show up frequently) and, more than anything else, death. It's the rare collection that doesn't have a single story, even a single paragraph, that's less than brilliant, and it proves that Williams is quite possibly America's best living writer of short stories.

The earliest stories in The Visiting Privilege show a young writer with both a keen sense of humor and an eye for the heartbreaking. The former is on display in "The Yard Boy," about a landscaper who fancies himself "a spiritual materialist ... free from the karmic chain." He gradually loses everything, though he doesn't seem to mind, even when his girlfriend dumps him with a note that just reads: "My ego is too healthy for real involvement with you. I don't like you. Good-bye." Williams regards the title character with a mix of compassion and amusement: "The moon can shine in a hundred different bowls, he thinks. What a lot of junk the yard boy thinks."

Williams can be harsh in her portrayal of her characters, but it's never undeserved — she's masterful at creating unsympathetic, yet fascinating, people. In "Hammer," a widow is forced to deal with her unbearable daughter, Darleen, a high school junior who loathes her. ("I'm hanging up, Mummy," Darleen says to her mother on a telephone call. "You can continue with your inanities if you wish." The story ends with an abrupt time shift and a shocking ending that calls into question everything that preceded it. That's one of Williams' favorite techniques: Straightforward, declarative writing punctuated with razor-sharp observations and twists that seem to come out of nowhere, but fit perfectly.

Williams is our poet laureate of loss and mourning, but she's so much more than that — she seems to have a supernatural ability to show what makes us function as people, at our best and at our worst.

The new stories in The Visiting Privilege are just as brilliant as the previously published ones. In "Brass," a father tries unsuccessfully to understand his son, a misfit who seems to think differently than anyone else. "This boy just needs to get laid," he thinks, but doesn't give him much more thought, or any regard at all. The story ends, as many of Williams' stories do, in a ghastly moment of tragedy, and it's not until the final word that the reader realizes why it all sounded so familiar. It's a gut punch that few writers could pull off, and Williams executes it absolutely perfectly — she's nothing if not unsparing. Nobody escapes her stories unscathed.

It may seem like an odd thing to say about a book that concerns itself so wholly with death, but even in its darkest moments, The Visiting Privilege is filled with a kind of hope, even a perverse kind of joy. Williams isn't a literary sadist, reveling in the suffering of others; she seeks to understand what sustains our humanity even in our worst times. And part of her realism is a refusal to deny that we all have a dark side, and at times a weird hunger for things going wrong. As one character puts it, "People remember bad news even though they might never have heard it in the first place."

Williams is a flawless writer, and The Visiting Privilege is a perfect book, probably the best short story collection to come out in several years. She is our poet laureate of loss and mourning, but she's so much more than that — she seems to have a supernatural ability to show what makes us function as people, at our best and at our worst. And most importantly, she celebrates our vulnerabilities, the moments that make us so imperfect and broken and essentially human. As one of her characters observes: "Grief is dangerous work ... but when you have overcome it and it passes away, are you not left more bewildered and defenseless than ever?"