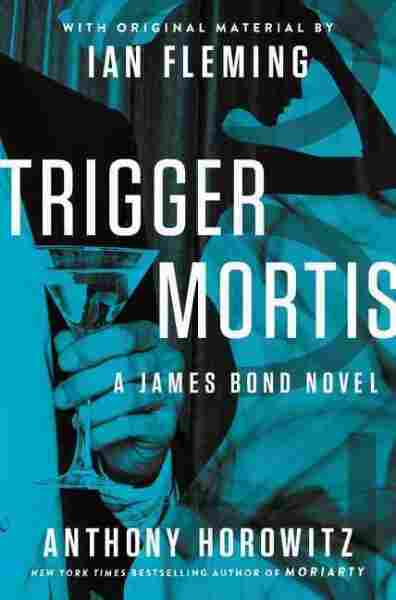 Anthony Horowitz has written novels, movies and television series, including the detective show Foyle's War. But he wrote his latest book, Trigger Mortis, on assignment from the estate of James Bond creator Ian Fleming. Trigger Mortis is a new Bond novel set just a few weeks after the end of Fleming's Goldfinger.

Horowitz tells NPR's Robert Siegel how he tackled a modern Bond storytelling challenge: What was cool in the 1950s and '60s, when Fleming published his books, can seem geriatric today.

On the ways in which Bond isn't so cool anymore

The first one that springs to mind is probably smoking. James Bond smoked I think about 20 to 30 cigarettes a day ... and I don't think many people would admire that these days. And perhaps some of the attitudes in the books were cooler then — even the violence, maybe, these days we think twice about. Of course ... one of the interesting things is trying to bridge this astonishing gap between the ... '50s and '60s, when the books were written and were thriving, and nowadays where so many perceptions have changed.

On Bond's precise tastes, and why they were seen as cool

When Sean Connery turned around and asked for a cocktail shaken but not stirred, it was cool to have that precision, that sort of absolute perfection in taste. And it follows in all the products that he demanded — you know, the right clothes, the right shoes, the right drinks, the right food, the right restaurants. ... Everything had to be absolutely precise. Back then, particularly at a time when luxury goods had been in such short supply for so long, it was the height of cool to be so precise in your demands.

On writing Pussy Galore into the new novel, and how he approached the storyline of Bond seducing a lesbian character

That was one of the dangerous areas, if you like, that I had to be very, very careful about ... because to suggest for a minute that Pussy Galore was a sort of a gay woman who could somehow ... be cured by her first relationship with a heterosexual man would, I think, be deeply, deeply offensive today. And of course it's not something which I consider to be even remotely true at all. And so in the book, in dealing with her, I had to take that on board and very carefully referenced her upbringing, but then gave the whole story a twist that I think gives it almost, dare I say it, a feminist edge — certainly a modern one. ... [Not only] is she a strong character, but at the end of the day she is a very independent character. And without wishing to give away too much of the story, you know, what she does to Bond — the way she reacts to him and the way their relationship develops and even ends — is, I think, a learning curve for him.

More On The Bond Franchise

On the documents that informed the novel

When the estate approached me — and I have to say straight away that I was enormously flattered and felt very privileged to be approached by them to do this continuation novel — I was the first of the modern Bond authors to be offered five television treatments that [Fleming] originally wrote for American television. These shows were never made because the films took off and suddenly a TV series was out of the question. The estate found these documents quite recently and had the idea that they would fold one of them into the new book and so I was asked to choose one. And the one that popped out at me was this story called "Motor and Wheels," which has a Russian plot ... to kill an English racing driver in order to show the superiority of their vehicles. In fact, it only contained about, I would say, 400 or 500 words that I could use. But the strange thing is ... that they were incredibly valuable to me. Just to have a few words by M written by Ian Fleming, a few words by Bond himself and this scenario — it was a wonderful inspiration.

It was an inappropriate word. I didn't mean to cause offense and it was a clumsy choice of words and I have apologized, because it was stupid. What did I mean by "street"? I was thinking really, I suppose, of the part he plays in the British TV show Luther, which I'm sure you see on American television too. I meant ... gritty, down-to-earth; what we would call a street cop. I see now that that was misconstrued. It was a clumsy choice. I regret it. ...

That's why I'm a writer, not a casting director. I would imagine that Idris Elba can be anything he wanted to be. In every film and every television show he does, he acts and he is brilliant at it. ... I mean, Daniel Craig is in some respects more gritty, dare I say, than other Bonds were. But you know, what's so great about this character is that no matter who plays him — and incidentally I want to say that I think Daniel Craig is a brilliant Bond, particularly in Casino Royale, which is probably one of my favorites of all the Bond films — you know, everyone brings something to the party, and the character endures and changes and morphs and moves with the times.

Read an excerpt of Trigger Mortis