Accessibility links
Cities Of Bone And Flights Of Fancy In 'Updraft' In Fran Wilde's world life happens above the clouds, towers are built from song and humans fly. Critic Amal El-Mohtar says Wilde's new novel is a powerfully innovative work of fantasy.

Cities Of Bone And Flights Of Fancy In 'Updraft'

Cities Of Bone And Flights Of Fancy In 'Updraft' 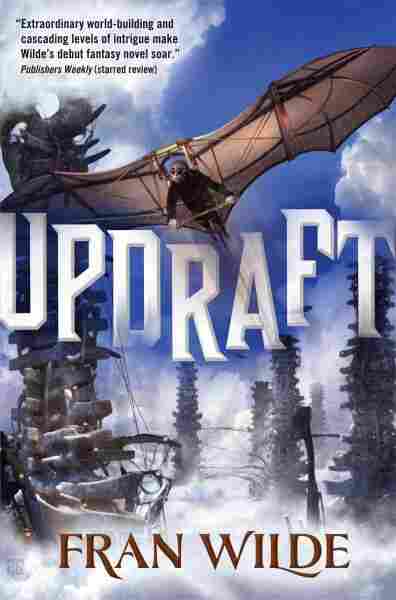 As a regular reader of fantasy fiction, I get used to seeing genre conventions established, repeated, played with and turned on their head — but regardless of how they're treated the conventions are always there, a low drone behind whatever music an author's making. A dragon contains a piece of every dragon that's come before it; every elf has ancestry; every magic system's a tapestry of traditions.

So it's especially wonderful to encounter a novel — a debut! — that reminds me of nothing so much as how wildly, powerfully innovative fantasy can be.

Fran Wilde's Updraft is set in a world where people live far above the clouds in growing columns of bone, traveling between them by means of mechanical wings or walking over rare bridges built of sinew. The Towers are coaxed into growth by the Singers, powerful fliers who police the citizens and protect the city from terrifying skymouths, so called because they're invisible until the moment they open their mouths to devour their prey. No one talks about the time before the Rise above the clouds, what happens or happened beneath them — all that's clear is that life, like the bones, grows upward. Long reams of tradition are kept by singing; metal is rare and precious; lawbreakers are literally weighed down in flight with bone chips detailing their crimes.

Kirit wants to be a Trader like her mother, Ezarit, whose skill in bargaining and travel has enriched their Tower considerably. If Kirit performs well during her Wingtest — a crucial rite of passage — she may well be allowed to follow in her mother's footsteps. But when Kirit ignores Laws, comes face to face with a skymouth and survives the encounter, the Singers take notice. Rather than simply punish her, they offer her a choice: Join them within the mysterious Spire, or bring shame and hardship on her Tower and family. Battered between conflicting loyalties, love for her city and a desire for truth, Kirit must navigate a vortex of laws, traditions and secrets with as much care as the winds that enable her to fly.

You'd be forgiven for thinking, based on the above, that Updraft suffers from Capital Noun Syndrome, a common complaint of secondary world stories — but in spite of Towers, Laws, Singers, it genuinely doesn't. Each of these things is wholly surprising in the context of the world-building: the organic nature of the Towers, the tangibility of Laws and the consequences for those who break them, the layers of significance among the Singers, all combine into one of the most original fantasy novels I've read this year.

I was astonished, too, by the tactility of flight. It would have been easy and sufficient for Wilde to gloss over flight mechanics in service of storytelling, but flight is intrinsic to the Towers' way of life: instead Wilde folds every clasp, strap and pinion into the development of plot and character without sacrificing pace or readability. The fragility of wings, the breakability of human bodies, the omnipresence of the potential to fall make for a constant, thrilling tension I found deeply impressive, and that's before getting into the compelling, well-rounded characters.

Forty pages from Updraft's end I began to worry about sequels and cliffhangers, but Wilde sticks a satisfying, stand-alone landing: I'm left wanting sequels because I long to know more about the world (what are the bones growing from!) and where Wilde's imagination will soar next. In the meantime it's all I can do to slow-clap this powerfully engaging debut: Wilde's world and characters — as is entirely appropriate — blew me away.