Chipotle says it's going to hire 4,000 workers this week. Thousands of applicants turned out on Wednesday for the restaurant's National Career Day. Second-round interviews begin on Saturday. 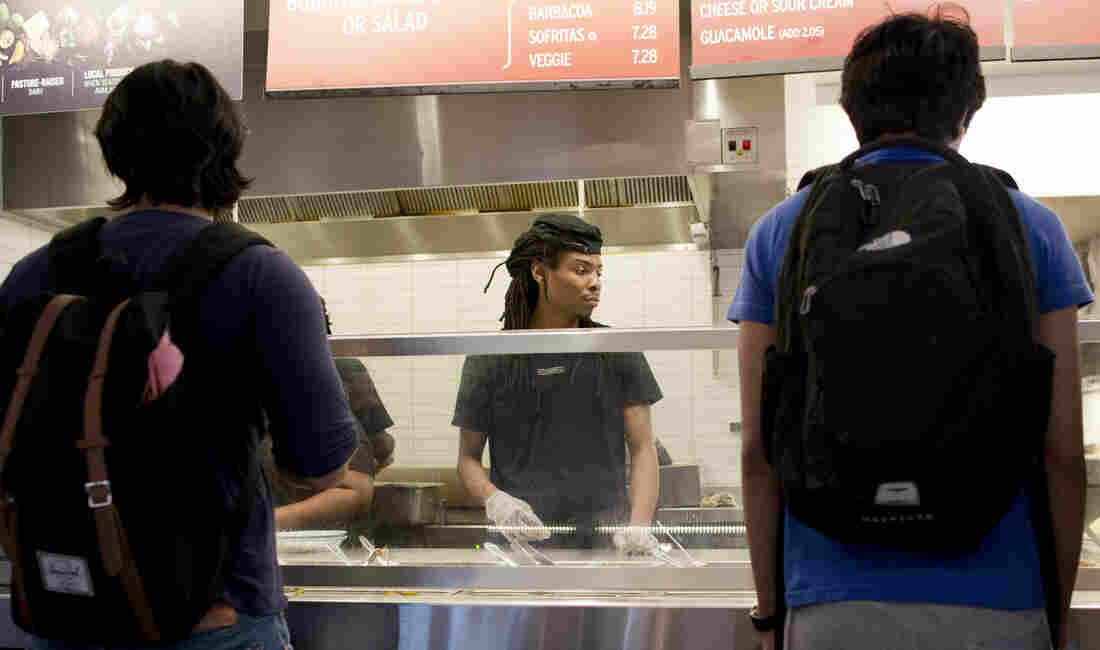 An employee serves customers in a Chipotle restaurant in Washington, DC on September 9, 2015. Chipotle, the burrito chain whose rocketing growth has fast-food giants like McDonald's reeling, is not slowing down: it plans to hire 4,000 new staff in one go. Andrew Caballero-Reynolds/AFP/Getty Images hide caption 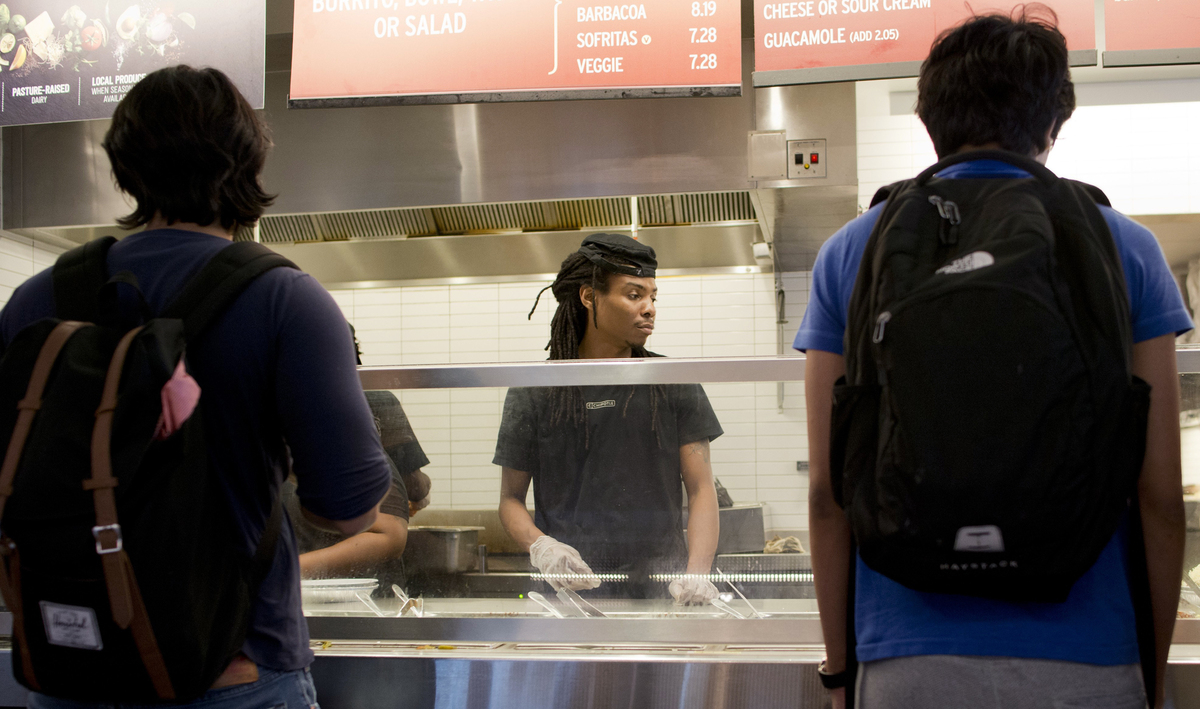 An employee serves customers in a Chipotle restaurant in Washington, DC on September 9, 2015. Chipotle, the burrito chain whose rocketing growth has fast-food giants like McDonald's reeling, is not slowing down: it plans to hire 4,000 new staff in one go.

Chipotle wants a few good men and women - actually, quite a few. The fast food chain says it plans to hire 4,000 workers this week across the nation, essentially all at once.

And here's what makes this news distinct. Though fast food is considered a synonym for low-paid temporary work, companies like Chipotle want employees to stay. NPR's Sonari Glinton watched the hiring in Los Angeles.

SONARI GLINTON, BYLINE: The streets of LA aren't exactly where you would expect to find a job interview. Well, that's what's happening at this Chipotle in South LA, near the USC campus.

GLINTON: Lizeth Arias is a college student. She was one of the applicants. She found out about the openings at Chipotle on a national career day job board.

ARIAS: Yeah, I need a job to help my family to stay stable and for me to pay - to help pay my books at school and just help around the house.

GLINTON: Arias says she's not just looking for a job but a career. She's one of the kinds of workers, though, the company is after. Chipotle announced they would hire 4,000 workers in a day following other recruitment announcements by Starbucks and Taco Bell. Chipotle and other companies are offering health benefits and other enticements in order to get long-term employees.

EMERALD MCCOY: I just been here 30 days. I just moved here from Minnesota.

GLINTON: Oh, and that is a very LA story, right? So you're looking for work?

MCCOY: I am, just like anybody else that would be looking for work that just relocated.

GLINTON: Emerald McCoy was in the interview group. She's not looking for a career - at least not at Chipotle.

MCCOY: I want to work specifically - if I can one day - work in high fashion and-or celebrity makeup artist.

GLINTON: She says she's been looking hard for a second job. She says this interviewing process, though, has been unlike the rest.

MCCOY: Then they went around and asked everybody names and what hobbies you had and stuff like that - you know, just like really get to know you for - you know, who I'm going to be working with. You know what I'm saying? Like, what do you like? You know, who are you? You know what I'm saying? Like, working next to you - you might be stranger danger or something, so most definitely it was pretty cool (laughter).

GLINTON: Chipotle's hiring process, though, has been problematic in the past. In 2010, a federal immigration audit showed some of Chipotle's Minnesota employees were illegal immigrants. More than 400 workers were dismissed as a result, and the company's hiring practices have been under close scrutiny ever since.

GLINTON: Boudreau met me outside of a Chipotle. He and other economists I talked to for this story say the job market is still very tight. Wages are stagnant. And, he says, especially here in Los Angeles, employers don't really need to hold special events to find workers.

BOUDREAU: This way of finding employees is very likely to generate a lot of attention. It's likely to generate a larger number of applicants in a big burst than you'd normally get. It does pose some questions about are we prepared to offer the quality of an interview and a hiring experience when we do it this big?

GLINTON: Boudreau says to hire 4,000 qualified workers, you have to interview a lot more than that. So besides being a job fair, it's a lot of publicity.

BOUDREAU: People at Chipotle need to be pretty careful about making sure that they're prepared to deliver on a good experience for the applicants, for the people who interview, and not just see this is as a very quick processing thing.

GLINTON: Boudreau says we can look to see how many of the workers are still in their jobs in a few months to determine whether this is a giant publicity stunt. All applicants I talked to made it to the second round of interviews which begin on Saturday. Sonari Glinton, NPR News, Los Angeles.