Accessibility links
'Not Funny' Proves Potent On A Tough Subject Leah Hayes' new graphic novel presents, in simple terms and unassuming pinkish illustrations, the story of two women who decide to get abortions, the choices they make and the steps they go through.

'Not Funny' Proves Potent On A Tough Subject

'Not Funny' Proves Potent On A Tough Subject 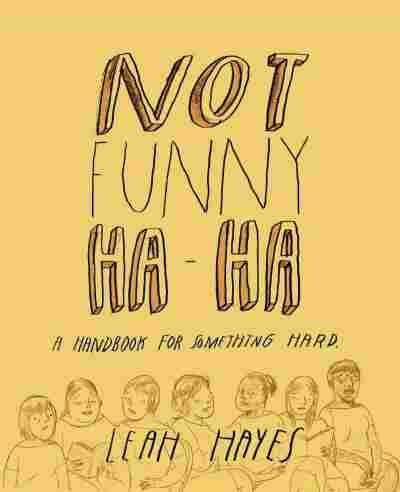 This book is a weapon that doesn't look like one. A graphic novel done in pink and gold, it's populated by rosily flushed characters drifting through unbounded space. Leah Hayes' lines are aggressively unassuming. They're hasty, even a bit clumsy, and her figures' expressive physicality seems to happen almost by accident. Hayes' coup de grace of diffidence is her lettering style. She writes like a teenager passing notes in class, with sloping rows of uneven characters and occasionally creative spelling. No wonder every page of her book seems to breathe out reassurance: Nothing to fear here.

But Not Funny Ha-Ha is a weapon nonetheless, simply because it's about abortion. Even though its approach to the topic seems as diffident as its style — it merely describes what a woman will go through if she chooses to get one — when it comes to this issue, the barest facts are irrevocably politicized.

By presenting some of these facts, Hayes launches a salvo at anti-abortion crisis pregnancy centers that try to talk women out of the procedure. Not Funny is a wobbly, blush-toned salvo, but that doesn't lessen the potential impact. This book is destined to make regular appearances in abortion rights opponents' nightmares, and prompt showdowns over library acquisitions policies. The content is straightforward, and yet it has a forbidden, samizdat feel to it. No matter where you stand on abortion, the thought of a scared, pregnant teen getting her hands on Not Funny is bound to provoke an intense reaction — of fear, rage, empowerment or overwhelming relief.

Which is, well, funny, considering Hayes' efforts to approach the subject with as little drama as possible. Her tone, like her design, is casual and friendly. She describes in plain fashion the process of getting either a medical or a surgical abortion, following two women, Mary and Lisa, who go the different routes. Hayes explains when and how often each has to go to a clinic, what it will feel like and what they should do to protect themselves emotionally. She's meticulous in outlining every step, from the apparently endless waiting-room time to the physical and mental fragility the characters feel after their procedures.

"Knowing that you are pregnant when you didn't expect or want to be can be scary," she writes. "You have to make appointments and figure stuff out fairly quickly. Which can be hard to do if you're scared. But first take a deep breath and tell yourself that everything is going to be OK. Because that will help you get through the next steps."

Without a doubt, the most delightful parts of the book are those where Mary and Lisa's friends and family members offer their support. When the characters hug, discuss feelings or just sack out on the couch watching Star Wars, it's clear that Hayes is in her element. There's a strong sense that she'd rather be drawing nothing but such moments; a whole book of squashy family-room couches, shared ice cream and comfortable touching.

But that's not this book, of course, so it's soon back to the realities of paperwork and exam tables. Any description of the procedures is likely to be difficult for those on both sides of the debate to read — Hayes aims to be both matter-of-fact and sympathetic as she recounts what Mary and Lisa are feeling.

It's all perfectly simple and straightforward — just what the debate over abortion often isn't. And Hayes accomplishes this radical shift by making the most of her innate warmth and humility. "I do not take this subject lightly. But I do want girls to be healthy, happy, make good choices for themselves ... and all I have is a pencil," she writes at the end of the book. "All?" That's one formidable pencil.