Accessibility links
In Lumberjack Bars And Coffee Shops, Jewel Found Her Voice The singer's life has played out like a country song: leaving an abusive father, living in a car, barely scraping by. Her big break came, of all places, at a cafe that was going out of business. 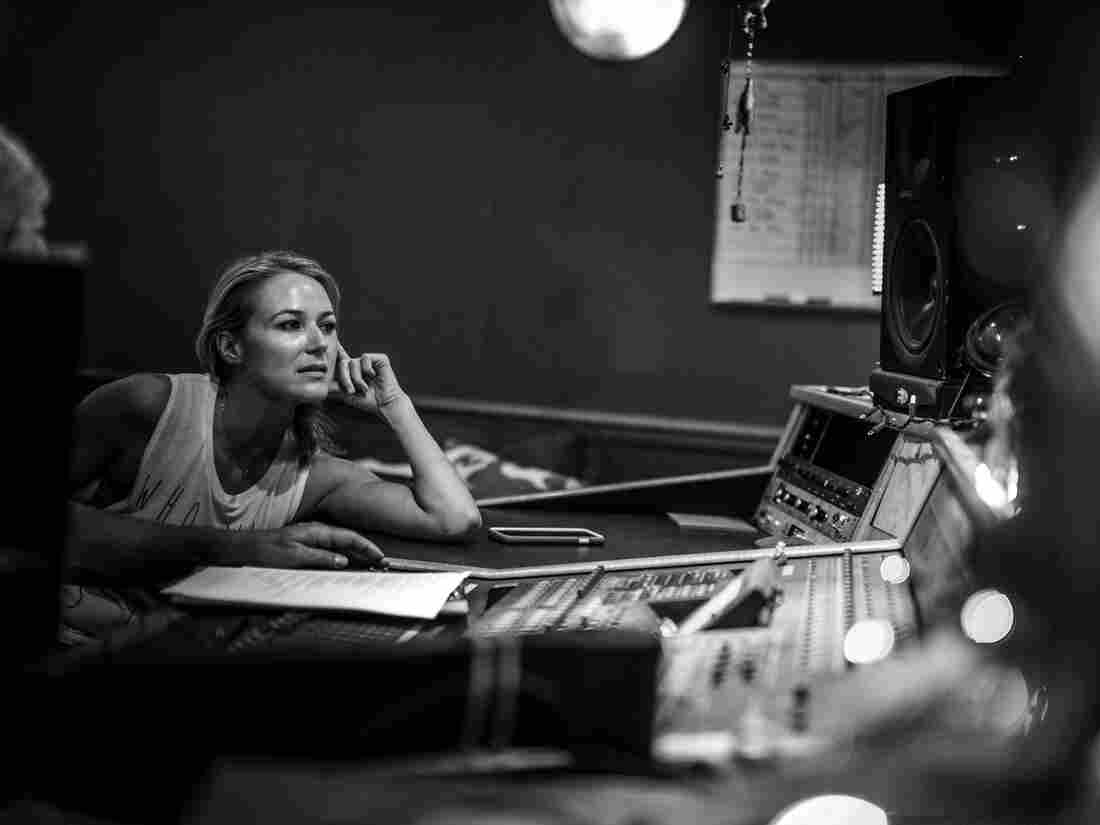 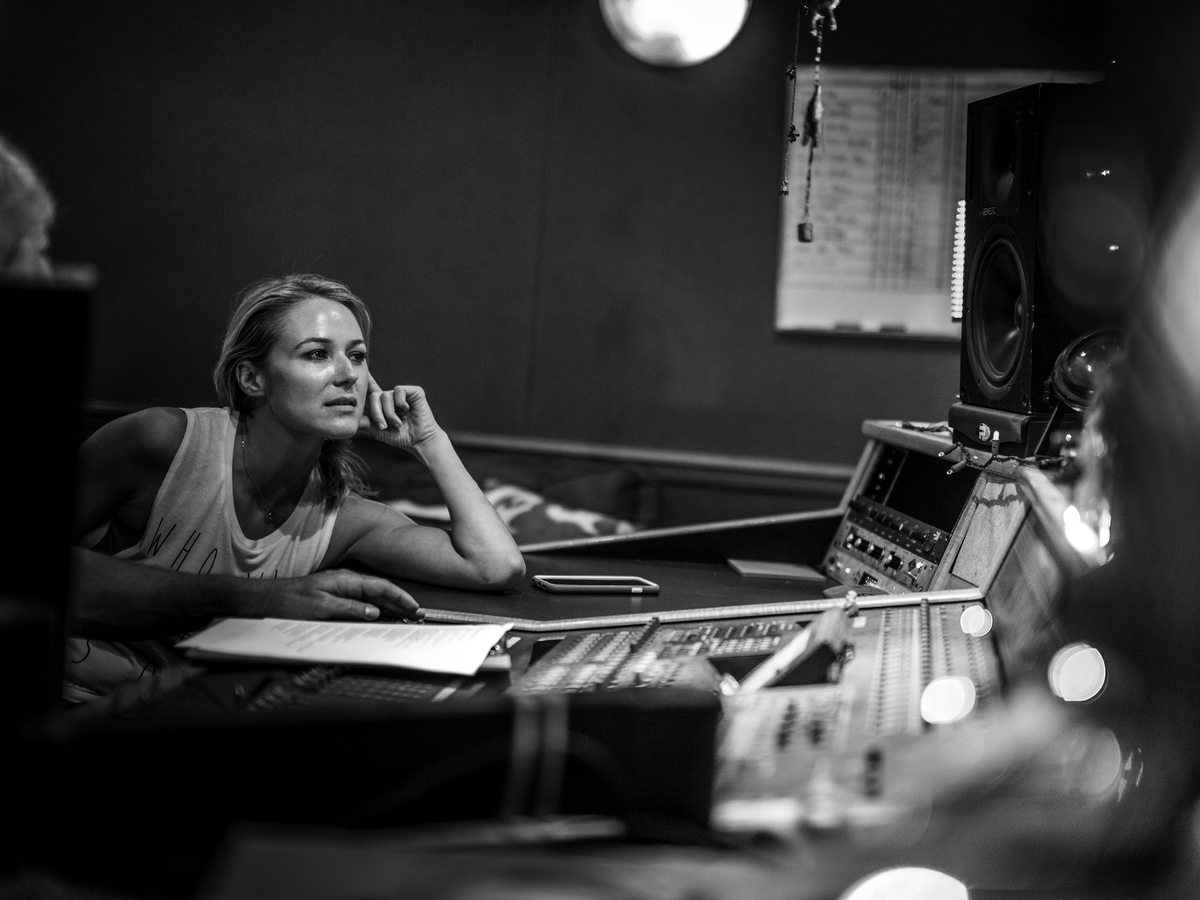 Singer/songwriter Jewel has a new memoir titled Never Broken: Songs Are Only Half the Story, and a new album called Picking Up the Pieces.

A run-down bar in rural Alaska isn't any place for a kid. But when she was a child, that's where songwriter Jewel found her voice — on dingy stages at lumberjack joints.

Jewel Kilcher was 8 years old when her parents divorced and her mom left the family. What was once the Kilcher family band turned into a duo — just her and her dad. They'd sing at bars and taverns, putting on shows for down-and-out drinkers and drifters passing through. 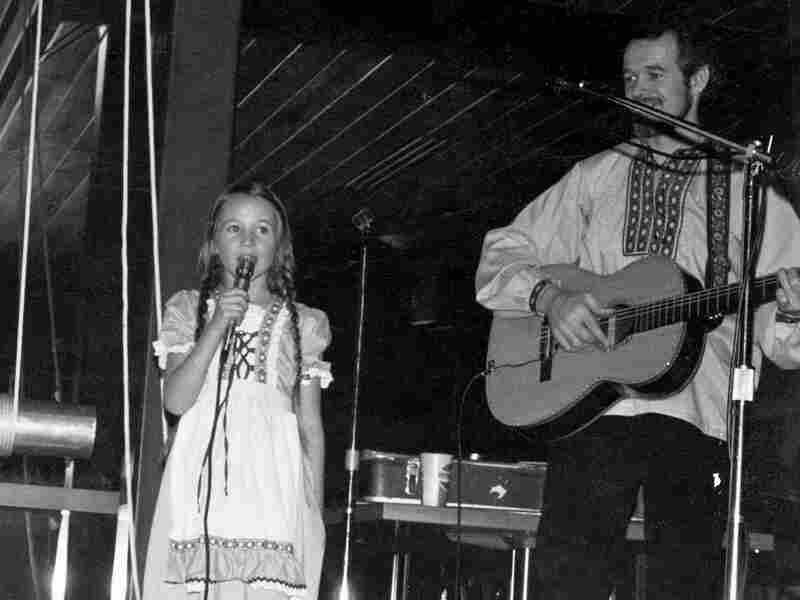 One of Jewel Kilcher's early performances in a Swiss yodeling outfit with her dad. Courtesy of Jewel hide caption 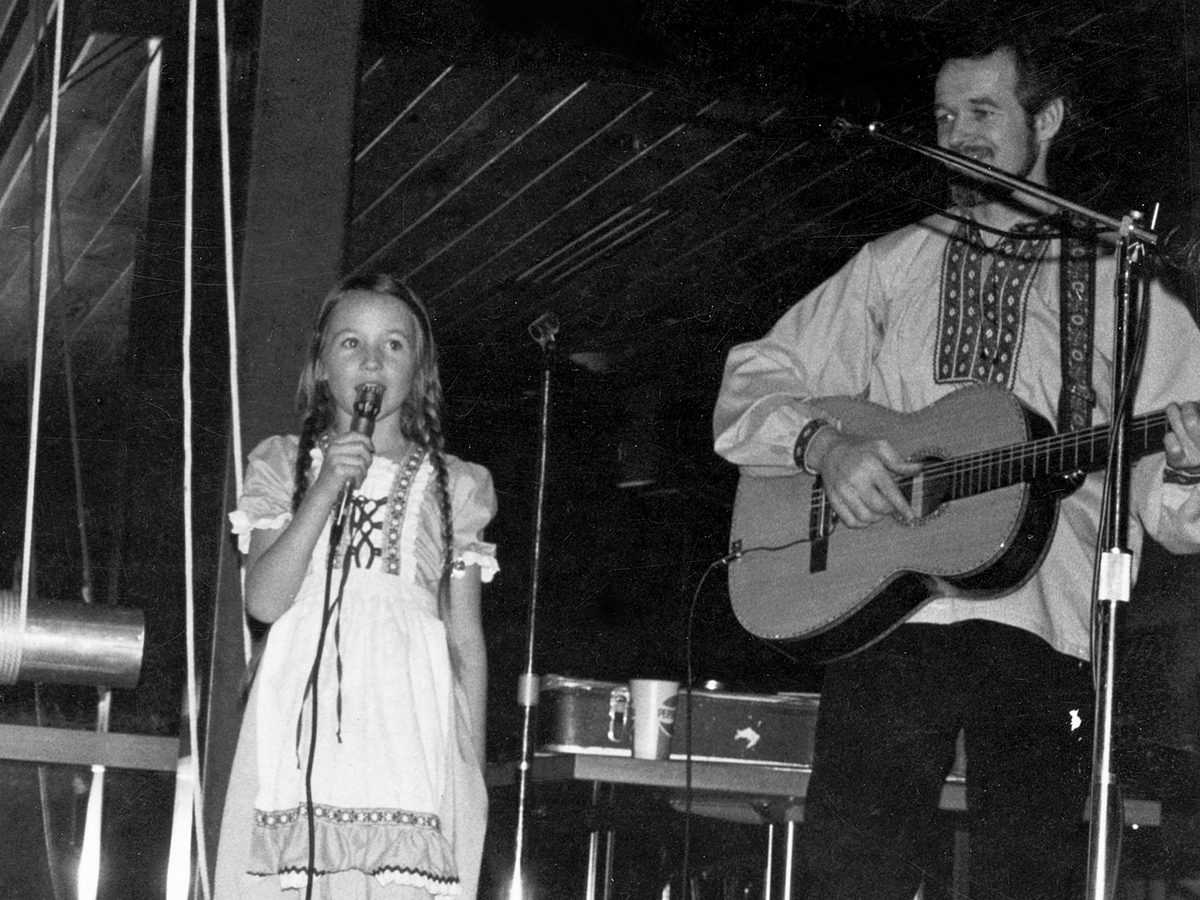 One of Jewel Kilcher's early performances in a Swiss yodeling outfit with her dad.

"It was the smells I remember the most, you know, that stale beer smell when you walk in to do your sound check earlier in the day," Jewel says. "It was the people that really stuck with me. Just watching what a woman would do for a compliment and what she would give up. Watching men try and outrun their pain. Watching how these people ended up."

"I was probably the only fourth grader that went from elementary school right to the bar," she says.

Jewel outlines her childhood in her new memoir, Never Broken: Songs Are Only Half the Story, out on Tuesday. She also has a new album out this week called Picking Up the Pieces.

By the time she was a teenager, she was out on her own. Her father had become physically abusive, so she moved into a cabin with no running water, hitchhiked her way around the country and reconnected with her mom in San Diego.

She ended up moving in with her.

"I was paying the rent and just working in a coffee shop and then in a computer warehouse," Jewel says. "And my boss took me out to dinner one evening. I realized halfway through the dinner that he was propositioning me." 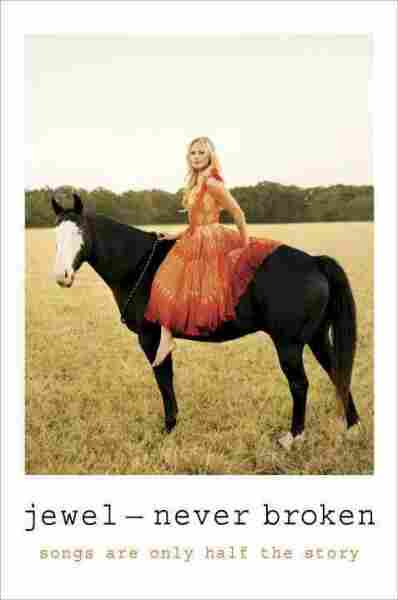 Songs Are Only Half the Story

Jewel grew up bar-singing, so she was used to the whole routine. She joked about it, turned him down and moved on. Her boss didn't even seem that upset.

"My rent was due the next day and so I went in for my paycheck and I walked into my boss' office, I was like, 'Hey, I'm here for my paycheck.' And he never would look up from his papers — he ignored me. And it became very clear very quickly that he wasn't going to give me my paycheck. And that he obviously was quite mad that I didn't sleep with him, that I turned him down."

She was humiliated. With no paycheck, rent would be late — again. She knew her landlord would kick them out this time.

Her mom suggested they start living in their cars.

"So that's what we did," Jewel says. "We each lived in our separate cars. I had a small Datsun hatchback. We did that for awhile and then she ended up going back to Alaska and I ended up staying behind in San Diego."

Jewel was just scraping by back then, and had kidney trouble. She couldn't hold a regular job because she'd get sick so often. And then the car she lived in was stolen, so she became homeless for a year.

"To be that desperate, that down-and-out, I was suffering from agoraphobia, I had been shoplifting, I really wasn't doing well," Jewel says. "And I started just baring my soul in these songs and talking about my worst shame and my worst fears."

She figured that if she couldn't hold a regular job, maybe she could book gigs at local venues.

"I started writing a lot of songs so that I would have a whole set's worth of material," she says. "My big break was at a coffee shop called the Inner Change in San Diego." 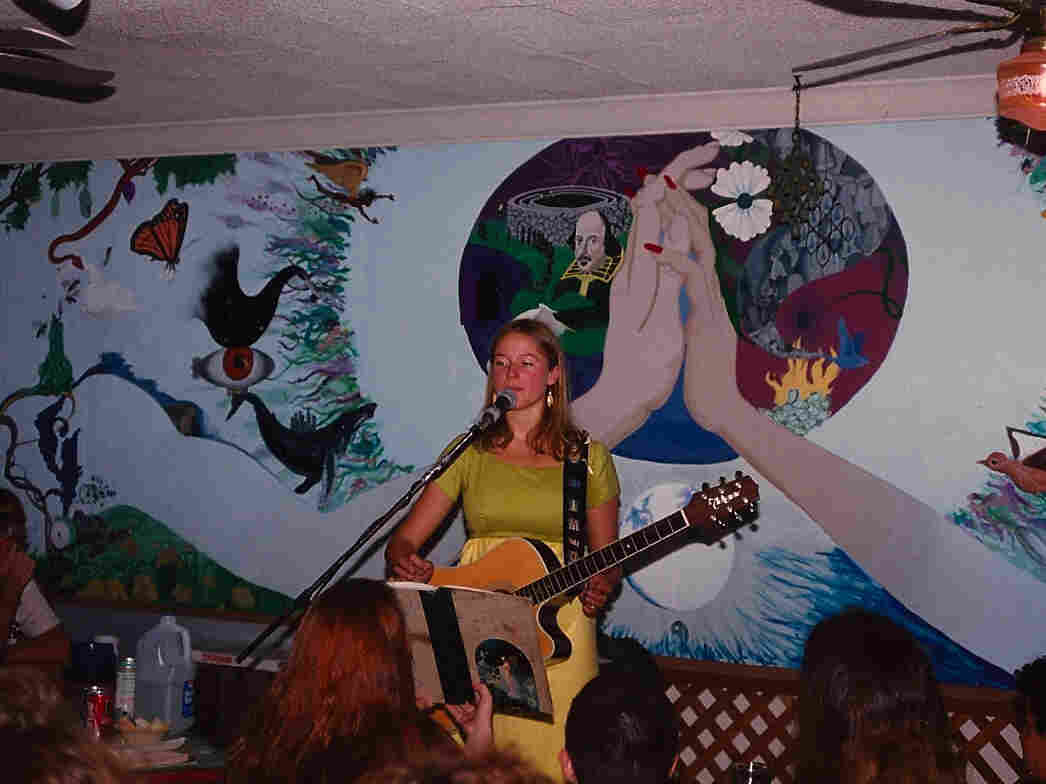 Jewel performing her weekly show at the Inner Change coffee shop in San Diego in 1993. Courtesy of Jewel hide caption 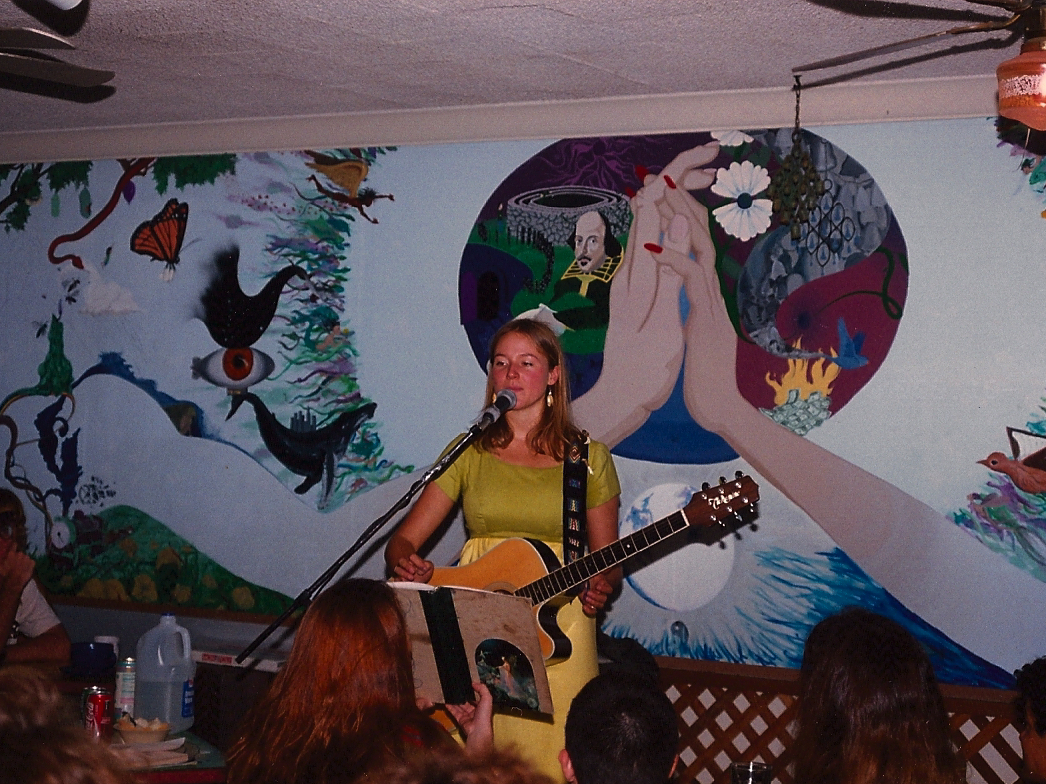 Jewel performing her weekly show at the Inner Change coffee shop in San Diego in 1993.

The owner, a woman named Nancy, desperately needed clientele because she was going out of business. She told Jewel she could play a show there every week and get whatever money they made at the door.

The first night, only a couple surfers showed up. But word spread.

"When labels started coming down to see me and hearing about me, these limousines would show up and it was like being Cinderella," she says. "It was an incredible thing and I ended up having a bidding war after me. Every single label in the entire country wanted to sign me. It was pretty incredible."

She ended up signing with Atlantic Records. Her debut album, Pieces of You, was released in February of 1995.

"You realize that so much of success, whether it's personal happiness or career, is really just about not giving up," she says. "It's about who has the grit to keep standing. And that's what my life's been about. It's brought me to my knees again and again.

"I basically invited my fans to say, 'I'm on a journey of trying to figure my life out. And if you guys are on the same journey, let's do this together.' "