Accessibility links
Law Beyond Our Borders: Justice Breyer Is On A Mission In his new book, Stephen Breyer details cases involving the interdependence of law in the U.S. and other countries. No branch of government can avoid dealing with global issues any more, he said. 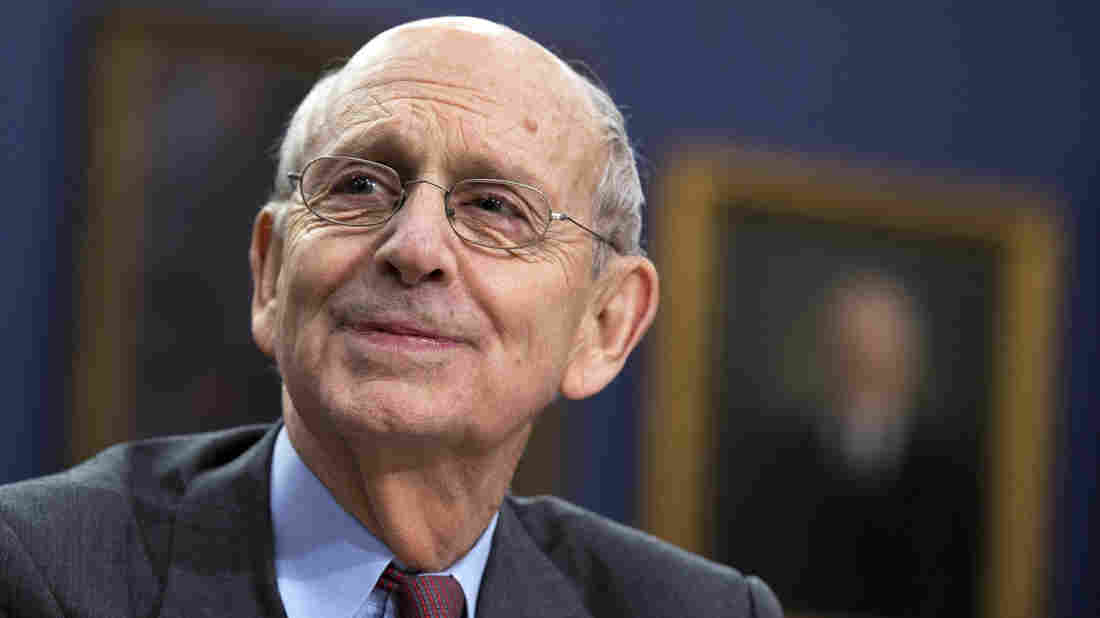 In his new book, The Court and the World: American Law and the New Global Realities, Supreme Court Justice Stephen Breyer details why American courts no longer have any choice about involving themselves in the law beyond U.S. borders. Manuel Balce Ceneta/AP hide caption 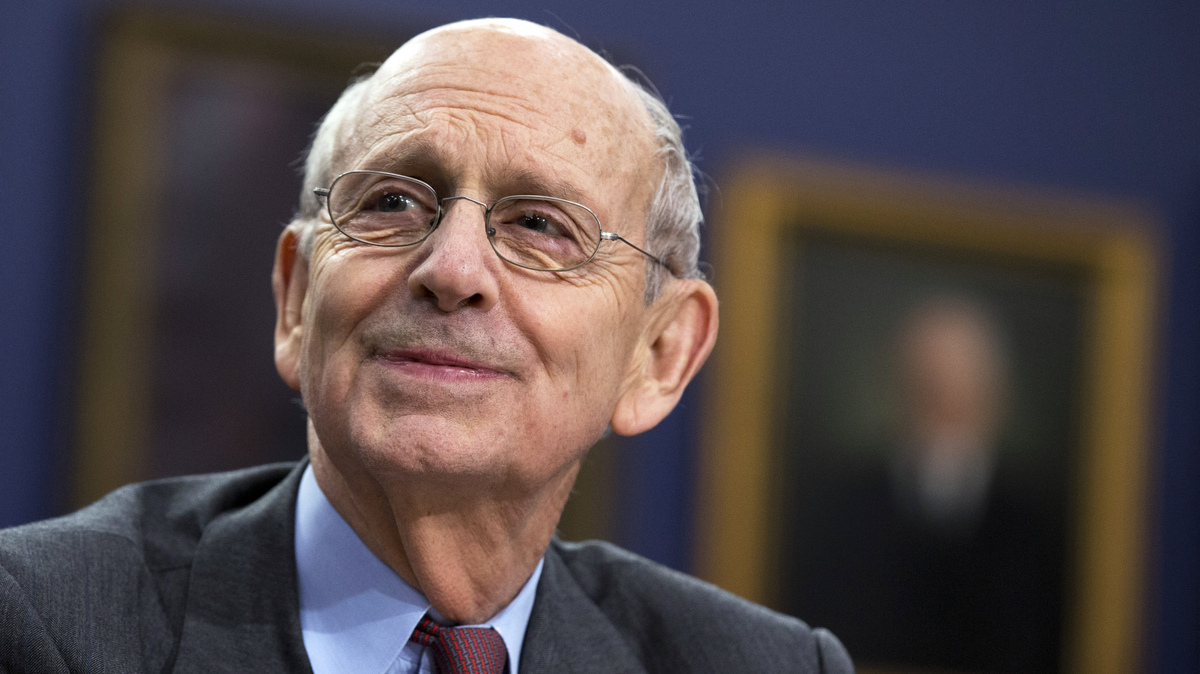 In his new book, The Court and the World: American Law and the New Global Realities, Supreme Court Justice Stephen Breyer details why American courts no longer have any choice about involving themselves in the law beyond U.S. borders.

For Supreme Court Justice Stephen Breyer, there was an "aha" Moment about the importance of law in the world.

It was Sept. 11, 2001. He was in India with Justice Sandra Day O'Connor, and they were having dinner at a restaurant with some Indian judges when the burning World Trade Center towers were shown on TV. The Indian judges were as horrified as the two American Supreme Court justices were. And Breyer began to realize their sympathy represented more than empathy.

In the following years, he began noticing that the Supreme Court docket was very different from when he first became a justice in 1994. Instead of just a handful of cases involving the interdependence of law in this and other countries, he estimates that the cases involving foreign law now have grown to as much as a fifth of the docket. 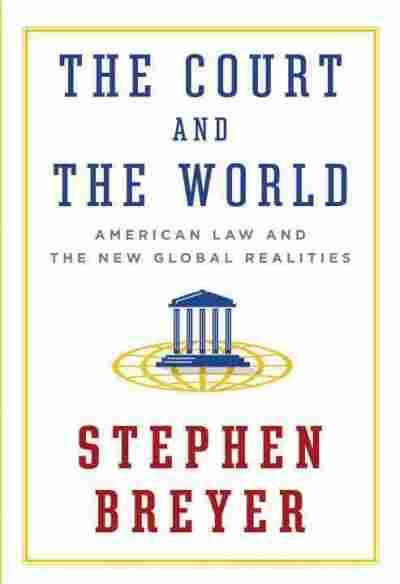 The Court and the World

Just this month, for instance, a federal appeals court in New York is hearing a case that many believe is ultimately headed for the Supreme Court. It tests whether a warrant issued by a federal court in the United States is sufficient to force Microsoft to produce emails from a drug-trafficking suspect. Microsoft maintains that prosecutors have to get an order from a court in Ireland, where the emails are stored.

Mulling this trend, Breyer has written a book titled The Court and the World: American Law and the New Global Realities. For the justice, it is more than a book; it is something of a mission — a mission to convince readers that American courts no longer have any choice about involving themselves in the law beyond U.S. borders.

As he noted in an interview with NPR, the law governing national security is quite different today than it was for most of U.S. history. From the time of George Washington through the two world wars, presidents could do as they wished during wartime. He points, for example, to the case in World War II in which the Supreme Court upheld the internment of Japanese-Americans.

"We put 70,000 American citizens of Japanese origin into camps for no good reason at all," he says. The court allowed that because, as Breyer puts it, the justices figured "someone has to be in charge." Better the president than the Supreme Court.

But by the Korean War, the court had a different view. In Youngstown Sheet & Tube Co. v. Sawyer, the court ruled that President Truman could not seize the nation's steel mills to keep them operating during a wartime labor dispute.

And after the Sept. 11 attacks, cases tested the indefinite imprisonment, without charge, of individuals brought to Guantanamo Bay. In four separate cases over several years, the Supreme Court declared that the president does not have a blank check to violate civil liberties during wartime and that prisoners have the right to challenge the grounds for their imprisonment.

Justice Breyer believes that this change in the court's rulings is due to a change in the larger world. "The nature of security problems has changed," he observes. "It's not straight-out war." We are no longer primarily fighting other nations, but terrorist movements that promise to last well into the future. "And if you say that the president has a blank check," Breyer said, "then you're back to ... the Japanese camps."

Turning to the area of trade and commerce, Breyer gives lots of examples of the interdependent world today. One that's easy to understand is a Supreme Court case involving a United States copyright statute. The facts were straight-forward. An exchange-student from Thailand studying in the United States found that his English textbooks, published by a subsidiary in Thailand, were cheaper in his home country. So he got his friends and relations to buy lots of books there, and sold them in the U.S. for a $75,000 profit. The American publisher sued for copyright infringement, but the Supreme Court sided with the student.

Breyer, who wrote the decision, notes that if you buy an American car made in the U.S., you are free to resell it. But suppose you buy a German car or a Japanese car? Are you prevented from reselling it here? The answer to that question, he said, will affect $3 trillion worth of commerce, because there are thousands of products sold in the U.S. made in whole or in part outside the U.S. And that's also why lawyers from all over the world filed briefs in the textbook case.

"To know whether you're creating chaos in a world of international commerce," observes Breyer, "you have to know something beyond our own borders."

Treaties, of course, are enacted to look beyond our borders. The first few American presidents signed just one or two a year. Today that number has grown by a factor of 10. That's not surprising, Breyer said, because ordinary travel, communications, business dealings, and even family relationships routinely take place across national borders. The Supreme Court in recent years, for instance, has dealt with three cases interpreting the international treaty on child abduction, known formally as the Hague Convention on the Civil Aspects of International Child Abduction.

What's more, many treaties delegate rule-making power to international bodies to enforce provisions involving trade, the environment, chemical weapons, air travel, and many other subjects. "There's even something called the international olive oil commission," Breyer notes, with a wry smile. "I'm not quite positive what they do with the olive oil, but my guess is that they set standards."

If there is an overarching question in Breyer's book, it is this: To what extent may Congress delegate its legislative authority through treaty and statute? If there are no limits, then what has become of the constitutional provision giving Congress the power to make all laws? But if you say Congress can't ever delegate its power through a treaty, "well then, how do we get our international problems solved?" Breyer asks.

"The world will go on without us, and we will be subject in many unpleasant ways to whatever they come up with, without having any word whatsoever in its creation."

Hammering out solutions is not easy, Breyer admits. But no branch of government can avoid dealing with global issues anymore. Even the divided Supreme Court agrees on that proposition, he says. "What we're trying to do is make certain that we protect basic values: democracy, human rights, rule of law."