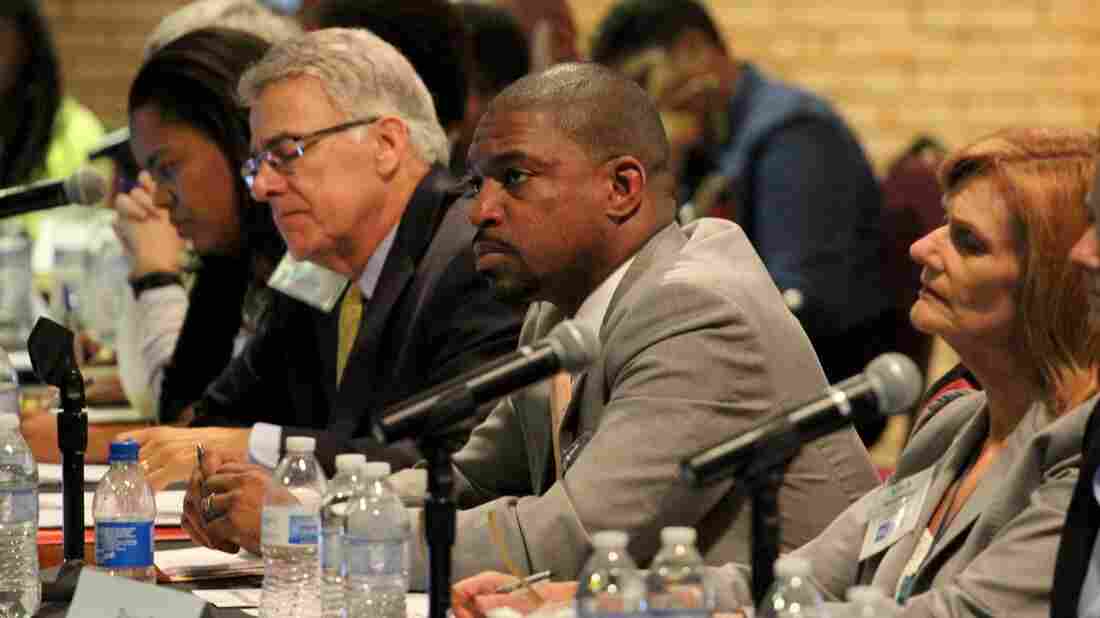 Members of the Ferguson Commission, including co-chairman Starsky Wilson (second from right), listen at a recent hearing. After months of deliberation, the commission is releasing a report laying bare racial and economic inequalities in the St. Louis region, and calling for change. Jason Rosenbaum/St. Louis Public Radio hide caption 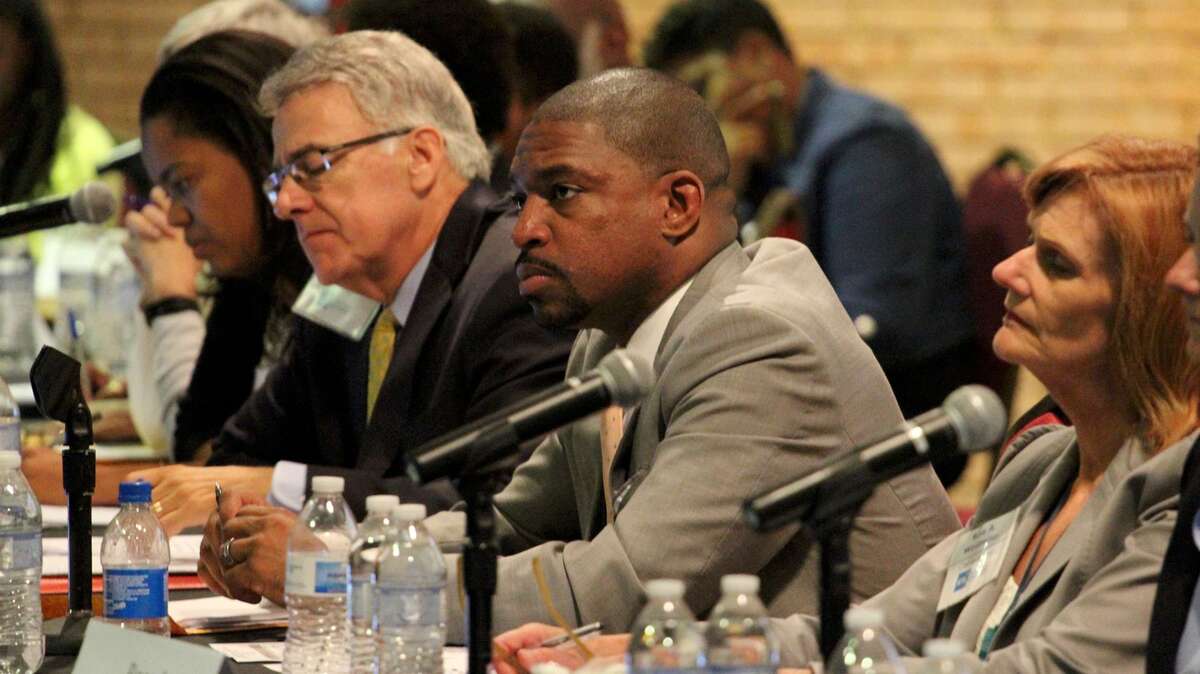 Members of the Ferguson Commission, including co-chairman Starsky Wilson (second from right), listen at a recent hearing. After months of deliberation, the commission is releasing a report laying bare racial and economic inequalities in the St. Louis region, and calling for change.

When Michael Brown was shot by a police officer in Ferguson, Mo., last August, his death set off riots and violence — and posed deep questions about race relations in America. The Ferguson Commission, appointed by Missouri Gov. Jay Nixon, was tasked with finding some answers.

The commission set out to examine racial and economic gaps through the St. Louis region, and come up with policy recommendations. In their final report, the commission provides an unvarnished look at how a racially divided St. Louis underserves the African-American community.

The report provides a host of recommendations to transform how the region polices and educates itself — and its most vulnerable residents. And in many cases, the suggestions would require the backing of a state Legislature that may well balk.

In all of this, Starsky Wilson, co-chairman of the commission, knows he's venturing into familiar territory.

During the commission's final meeting last week, Wilson, a St. Louis religious leader, talked about the work of political scientist Lindsey Lupo, who penned a book examining nearly 100 years of "riot commissions" set up after American rebellion and unrest.

Many of these commissions failed, Lupo argued, because they failed to tackle latent racial tensions and systemic discrimination.

But Wilson and his fellow commission members are taking another path. Wilson looked to places like Cincinnati where residents dealt head-on with their community's inequities — not just settling for "accommodation and quiet." And the commission's final report, set to be publicly released today, pulls no punches about the underlying causes behind last year's unrest.

"We have not moved beyond race," the final report states.

We have not moved beyond race. St. Louis does not have a proud history on this topic, and we are still suffering the consequences of decisions made by our predecessors.

"St. Louis does not have a proud history on this topic, and we are still suffering the consequences of decisions made by our predecessors. ... We are not pointing fingers and calling individual people racist. We are not even suggesting that institutions or existing systems intend to be racist.

"What we are pointing out is that the data suggests, time and again, that our institutions and existing systems are not equal, and that this has racial repercussions," the report continues. "Black people in the region feel those repercussions when it comes to law enforcement, the justice system, housing, health, education, and income."

To change that status quo, the report points to several dozen "signature priorities." They include changes to law enforcement practices, economic development strategy and education policies. While many of the ideas could be implemented without governmental actions, some of the big proposals will require the blessing of a state Legislature that's been hesitant to back overhauls of law enforcement.

The changes wouldn't be easy or comfortable — but the commission's leaders say the need is compelling.

A Focus On Criminal Justice

At the heart of the report are suggested changes to the region's law enforcement agencies and municipal courts, including:

We're behind the curve on police professionalism, accountability and oversight on the state level.

"If we look at ourselves in comparison to other states, we're behind the curve on police professionalism, accountability and oversight on the state level," Isom, who is a former St. Louis police chief, said last month. "The reality is we're going to have to make the case that this is important for our community. ... It's important just on a human level for this. But it's also important for the success for our region and our state."

It also suggests that the Legislature adopt broader statewide policies, including expanding Medicaid eligibility, raising the minimum wage, cracking down on unscrupulous lenders and bolstering the amount of low-income housing.

"The response we have seen to the process says that people in St. Louis want to make a difference, and they believe that the region can be better," the report states. "It also says they want to work together to do it. This report, and the policy changes we have called for, will be part of the legacy of the Ferguson Commission."

The commission, which conducted roughly nine months' worth of public hearings and other inquiries, doesn't have the power to implement any of the recommendations.

In fact, many would require the backing of a GOP-controlled Missouri General Assembly that almost certainly will be hostile to some of the suggestions — especially expanding Medicaid or raising the minimum wage. Republicans may also balk at some of the law enforcement proposals — especially when they didn't adopt some of them during the last legislative session.

Lt. Gov. Peter Kinder, who has long been skeptical of the commission, openly questioned whether the report would vanish into history like other studies — such as the Kerner Commission report that came about after racial riots in the 1960s.

While praising individual commission members for their work, Kinder last week challenged whether the Missouri Legislature would embrace the proposals. He's also raised issues with the commission's costs, including paying managing director Bethany Johnson-Javois nearly $140,000 for her role. (Kinder notes that's more than the governor makes in a year.)

I certainly hope that it will not be another commission report that gathers dust. But it was reasonable, I think, at the outset of this to have that suspicion.

"I certainly hope that it will not be another commission report that gathers dust," Kinder said. "But it was reasonable, I think, at the outset of this to have that suspicion and to question the budgetary outlays, which have ... made this process very, very expensive."

It's not just Republicans who could be hostile to the proposals. St. Louis County Prosecutor Bob McCulloch gained national attention for examining Brown's shooting death. Many called for him to step aside from the inquiry because they felt he was too friendly with law enforcement.

But earlier this summer, he sharply criticized proposals to bring in special prosecutors for police shootings, calling them impractical and misguided.

"We elect prosecutors in the state of Missouri. And we elect them to do the job, and that includes investigating and prosecuting every case within that jurisdiction," McCulloch said. "And if you don't trust the prosecutor to do that, then don't elect them. Or throw them out at the next election when it comes."

At least one outside observer worries that the commission's bully pulpit isn't strong enough to engender policy change.

Al Gerhardstein is a Cincinnati attorney who helped facilitate a legally binding agreement in his city after a rash of police shootings. Without the blessing of a court order, Gerhardstein isn't sure that the Ferguson Commission's suggestions will go anywhere.

Blue-ribbon commissions generate reports that go into nice bound documents and then go on shelves.

"Blue-ribbon commissions generate reports that go into nice bound documents and then go on shelves," he said. "We spent 20 years, probably 13 different reports, and never got anything accomplished."

Still, some commissioners remain optimistic that their proposals will find favor with the public.

Gov. Nixon says he'll use his last year in office to push for some of the commission's recommendations. While he faced immense criticism for how he handled the aftermath of Brown's death, the governor says the lessons learned from the past year are too important to ignore.

"I do think that the splinter point was whether or not, with what happened last summer and into the fall, whether as a state we were going to back up and say problems don't exist and we're going to ignore them," Nixon said last week, "or whether we're going to lean forward and work together to move our state forward."

Johnson-Javois said earlier this year that many people who provided suggestions to the commission are prepared to incorporate them — without legislative action — into schools, police departments and individual communities.

"People are getting excited about ... how to implement," Johnson-Javois said. "And that natural energy that's built up is what's already sustaining this beyond an individual, a leader or commission."

While the commission's charge is set to expire at the end of the year, Wilson said the individual members could go back to the corporate, educational, law enforcement and governmental realms to push for the policy changes in the report.

And while the report itself acknowledges that its recommendations may not be the complete answer for what ails St. Louis, it goes on to say "we believe to be the best starting point, the beginning of a path toward a better St. Louis."

"We expect that as we travel, the path will change, and we'll find ourselves navigating places we couldn't have imagined," the report states. "That is the nature of efforts like this."