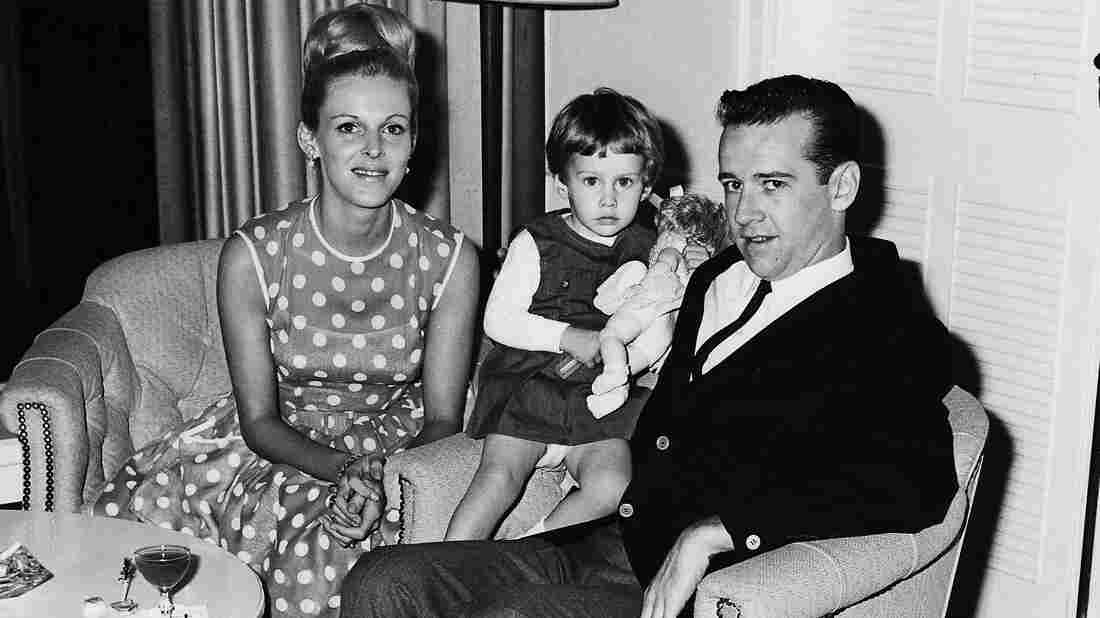 Kelly Carlin (center) says her parents, Brenda and George Carlin, could never be accused of hovering over their only child — she says her dad was "the ultimate laissez faire parent." Courtesy of Kelly Carlin hide caption 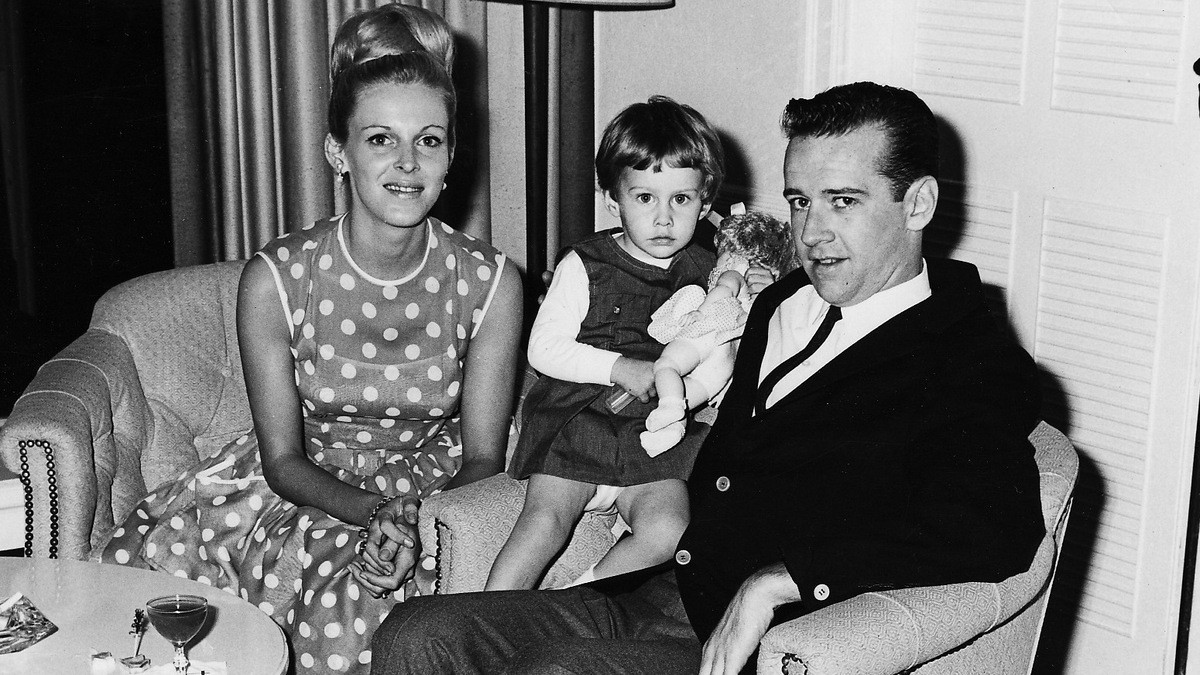 Kelly Carlin (center) says her parents, Brenda and George Carlin, could never be accused of hovering over their only child — she says her dad was "the ultimate laissez faire parent."

In the comedy world, it's a commonly held belief that there's a dark side to being funny — and Kelly Carlin is living proof. The daughter of the late comic genius George Carlin has just written a memoir about her childhood. It's called A Carlin Home Companion, but it's nothing like what you'd find on Lake Wobegon.

In her book, Kelly writes that her parents, George and Brenda, could never be accused of hovering over their only child. In fact, in a 1999 HBO special George ranted about overprotective parenting:

"You know what it is? These baby boomers, these soft, fruity baby boomers, are raising an entire generation of soft, fruity kids who aren't even allowed to have hazardous toys for Christ's sakes. Hazardous toys, s***. Whatever happened to natural selection, survival of the fittest? The kid who swallows too many marbles doesn't get to grow up and have kids of his own."

The audience howled and Kelly says she laughed, too, though she wasn't all that surprised. "I sat in the audience listening to this going, 'Well, of course this disgusts him, because, you know, he was the ultimate laissez faire parent.'"

That's one way to put it. Kelly's book has harrowing stories involving her as a little girl alone with her mom and dad while both of them are wasted on drugs and alcohol. One such story took place in a hotel room in Hawaii when Kelly was 11 years old. She writes:

"We had spent the entire day in the bar in Lahaina so my dad could score some coke and weed. ... The coke was running low, Mom wanted more and Dad wouldn't share. They fought, threatened divorce, and argued about every trespass they'd ever committed against each other in their 14 years together. Then Mom picked up a kitchen knife, and Dad did, too.

"I screamed and hurled myself between them.

They did stop, and little Kelly became the adult:

"I wrote out a UN-style peace treaty that stated, 'I, George Carlin/Brenda Carlin, will no longer buy or snort cocaine, drink alcohol, or argue with each other for the rest of the vacation. The undersigned agrees to these conditions so that we can all have a perfect Hawaiian vacation.' I even drew those little lines with their names underneath, and they both signed it." 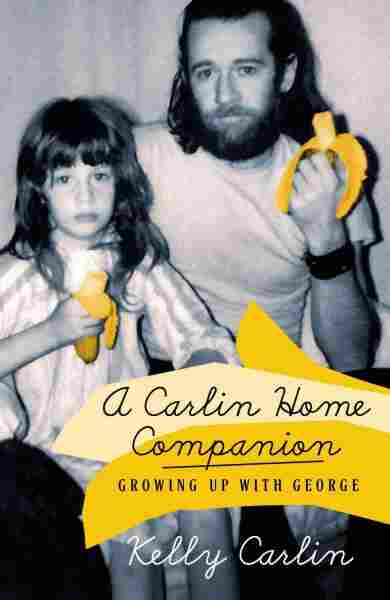 Growing Up With George

Sadly, both parents broke it almost immediately. Kelly writes that they resumed their habits the same day: Mateus rosé for Brenda; cocaine for George. "I spent the rest of the vacation as far away from them as I could," she writes, and "pretended" to everyone she met that she was having "the perfect Hawaiian vacation."

Very early on, Kelly says she became an expert at figuring out what drugs her parents were on. "I could tell. Was Mom drunk? Was she just waking up and had a hangover? Had Dad been up for a few days with cocaine, or was he just smoking some weed and he's just, you know, kind of mellow? Have they been arguing, are they getting along? Walking on eggshells doesn't even begin to explain it."

Meantime, in the 1970s, George Carlin's career was soaring. He packed shows on college campuses; his comedy albums were best-sellers; he was a regular on TV variety shows hosted by Flip Wilson and Tony Orlando; and he was stirring up trouble — and making history — with "Seven Dirty Words." In 1975, he became the very first host of a new show called Saturday Night Live.

Stoned or not, George Carlin was also a perfectionist. According to Jerry Hamza, George's manager and best friend for more than 30 years, the comic worked at his craft incessantly. He says, "I would tell people, 'Well, where's George? He's up in the trees,' because what he wanted to do was write. He wanted to go away, be by himself and write." When George wasn't writing, he and Hamza were on the road driving to gigs, TV tapings and meetings with entertainment industry types. "I spent more time with him than his wife or his daughter," Hamza says.

Long absences and drugs aside, A Carlin Home Companion also includes moments of George Carlin as a pretty cool and caring dad. Kelly says watching TV together — The Carol Burnett Show, Wild Kingdom — was a riot. "Especially the fun animal shows because he would do all the voices and it was way more entertaining than the actual show," she says.

Music was a huge passion George shared with his daughter, whether it was putting his headphones on her so she could listen to a new piece called Tubular Bells or playing The Beatles' White Album around the house. Kelly says the first song she ever learned to sing was The Beatles' "The Continuing Story Of Bungalow Bill." "There were kids in it, you know, 'All the children sing.' You know, I remember skipping around the house, singing the words at the top of my lungs — 'Hey, Bungalow Bill, who did you kill?' — [having] no idea what that was about." Kelly still has her father's iPod with some 20,000 songs on it — blues, folk, jazz and rock. "He was always discovering new music." 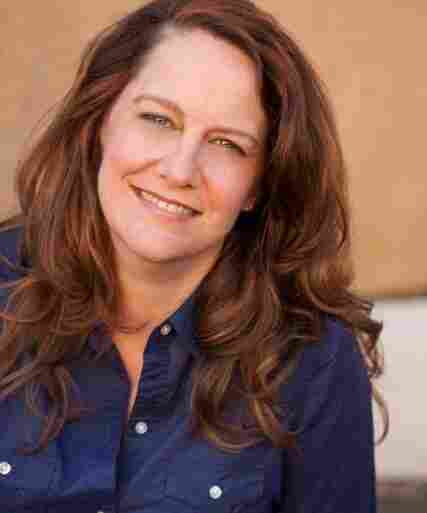 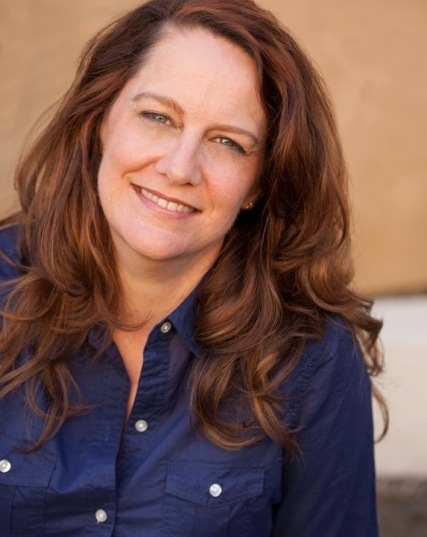 At its core, A Carlin Home Companion is about the perks and pitfalls of being the daughter of a famous, edgy comedian in the 1960s and '70s. Kelly writes about new cars, Caribbean vacations and a night of partying with Leif Garrett and Griffin O'Neal that, amusingly, ends up a sleepover at the home of Griffin's parents, Farrah Fawcett and Ryan O'Neal.

At the same time, Kelly struggled well into adulthood to overcome the fear that comes with being raised by addicts. "This book has always felt like unfinished business," she says. "I wanted to tell my survivor's tale of how I found my way through the chaos."

When George Carlin died in 2008, Kelly says the outpouring from her dad's fans was overwhelming. Comedians who worshipped him shared their grief with her — Gary Shandling, Richard Belzer, Lewis Black and Jon Stewart among them. She writes:

"My father was gone. But I was not alone. I didn't have to fear falling down a rabbit hole of grief because these men were stretching out their hearts and declaring, We are here for you. I realized that these men were, in some ways, my father's other children. He had inspired, shaped, and determined their lives as much as he had shaped mine. They, too, were his heirs. I felt an instant kinship with them. They were my brothers and uncles. I felt a net of love catch me and carry me forward."

Today Kelly hosts a radio show on Sirius XM, and she and her father's longtime friend Jerry Hamza are very much the keepers of his legacy. She also inherited a wicked sense of humor.

The audio of this story, as did a previous version of the Web story, incorrectly attributes George Carlin's "fruity baby boomer" bit to his 2008 HBO special. In fact, it's from Carlin's 1999 HBO special.